Pregnant At 57, A Woman Finds Tragedy And Reconciliation 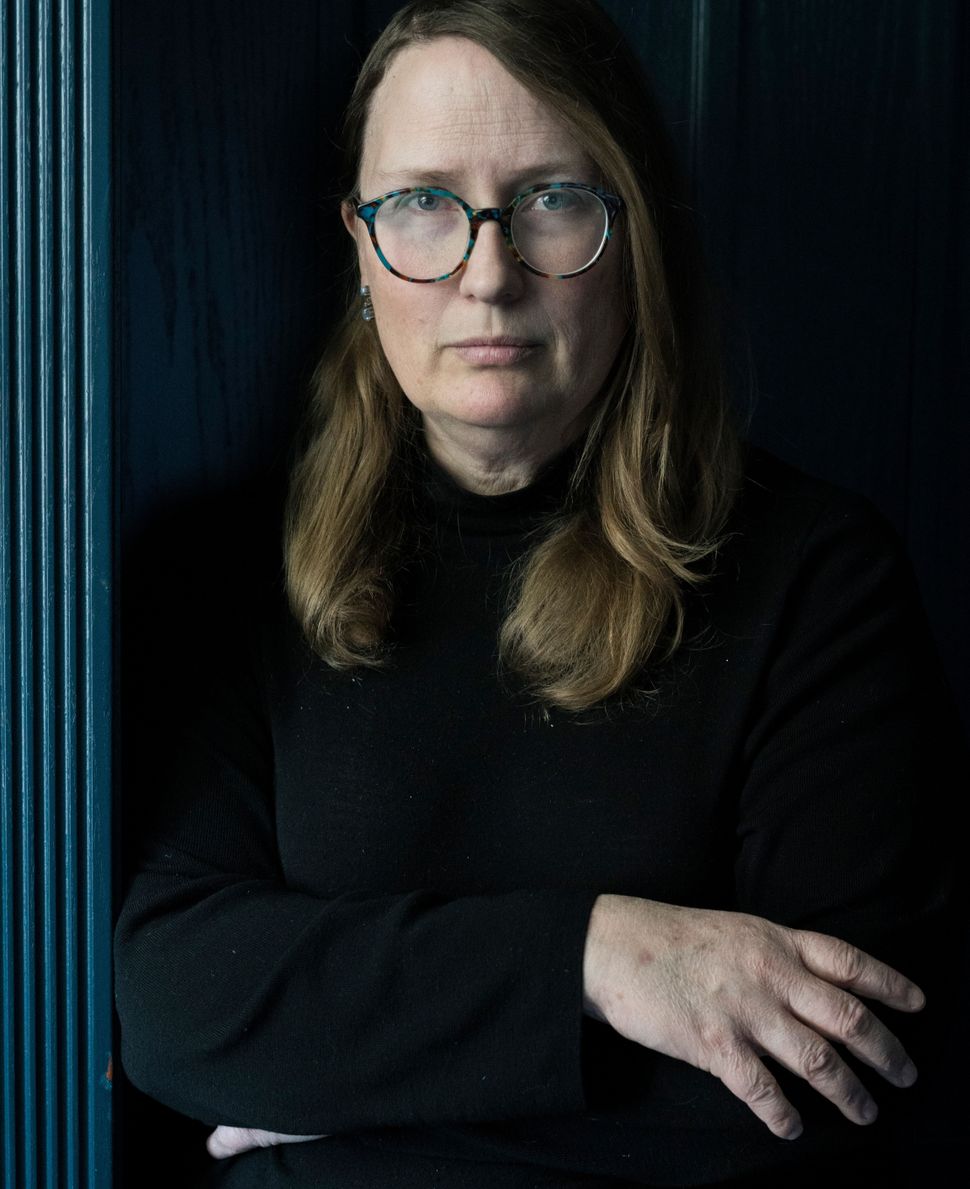 Goldie Goldbloom, author of “On Division” Image by Shterna Goldbloom

On Division: A Novel

The world conjured by Goldie Goldbloom’s “On Division” lies somewhere between realism and magical realism, at once vaguely possible and highly improbable. That liminal space seems just right for this elegant novel about a Hasidic woman cocooned by her close-knit faith community, yet increasingly alienated from it.

Goldbloom’s conflicted protagonist, Surie Eckstein, is the mother of ten children and the grandmother of 32, one of whom is expecting Surie’s first great-grandchild. She lives in proximity to most of them, as well as to other relatives and friends, in a rule-bound Hasidic enclave in Williamsburg, Brooklyn.

When the novel begins, Surie is 57, post-menopausal, and a breast cancer survivor. Yet she somehow finds herself pregnant once again — with twins. Goldbloom sets the stage with an epigraph from the biblical story of Abraham’s wife Sarah, pregnant at 90. But readers will need to suspend disbelief, and continue doing so as Surie drifts away from both common sense and communal norms. (The third-person narration is mostly, but not exclusively, from Surie’s perspective.)

Reeling from shock, Surie is disinclined to share the news of her condition, more shameful than joyful, with the rest of her family. Because she is obese, her pregnancy is hard to detect, and her age throws people off track. Ironically, only her blind mother-in-law guesses her secret. Surie’s husband, Yidel, a 62-year-old rabbi, is normally attuned to her and certainly no stranger to pregnancies. But he misses all the signs, even as she repeatedly spurns his nocturnal advances, copes with fatigue and morning sickness, and bursts out of her clothing.

“For a man, he was intuitive,” Goldbloom writes. “But not now. What was wrong with them? Why didn’t he guess? Why didn’t she say?”

Paralyzed by a compound of anger and fear, Surie procrastinates. “Never before had she kept a secret from Yidel,” Goldbloom writes. “Never had she felt so lonely or so powerful.” The secret becomes “like a stubborn walnut that would not be cracked, no matter the pressure.” Flouting the stern advice of her midwife, Val, and other medical professionals, she stubbornly stays mum — to the bitter end.

Goldbloom, author of “The Paperbark Shoe” and herself the Hasidic mother of eight, depicts the arranged marriage of Surie and Yidel as a true love story. Over the years, the two have come to share both an emotional connection and physical passion. Yet there is a wall of silence between them in the aftermath of the tragic death, four years earlier, of their son Lipa.

Lipa was gay, doomed to pariah status in a community that prizes tradition, procreation and self-abnegation. Becoming HIV-positive out of ignorance, he was arrested on “nine felony counts of malicious mischief involving infected bodily fluids.” Jumping bail, he fled to California, ended up homeless, and was found dead, hanging from a tree.

Lipa’s ghost still haunts Surie, reappearing every time she lets her thoughts wander toward regret. “Would Lipa still be alive if they could have just loved him as he was?” she wonders. Yidel, however, deals with the loss through denial. As custom dictates, their errant son is rarely mentioned, “only sideways, in whispers,” and the family has removed his photographs from their albums.

As the silence between the once harmonious couple festers, so, too, does Surie’s discontent. She begins to feel the pull of the secular world. Val, sensing her restlessness and needing her help, enlists Surie to work at the hospital. There she encounters a 12-year-old Hasidic girl impregnated by rape and becomes involved in her life. Initially a volunteer interpreter for other Yiddish-speaking patients, Surie assumes a paid position as an apprentice midwife and surreptitiously takes medical texts home to study.

Though Goldbloom is Australian, her portrait of Surie and the Chassids of Williamsburg glows with sympathy and authenticity — at least so it seems to an outsider. “They lived the way they had always lived…,” she writes. “The men sat and studied the word of God their entire lives….The women raised beautiful families, glorious families with hundreds of grandchildren, thousands of great-grandchildren.” Goldbloom knows the Yiddishisms, the customs, the constraints — and the longings that chafe against them.

Surie lives on Division Street, but Goldbloom’s title, “On Division,” seems to reference not just geography, but her protagonist’s divided soul. On the one hand, Surie deeply appreciates the security of her life, anchored in ritual and familial love. On the other, she yearns, even amidst this unlikely pregnancy, for something more: intellectual engagement, a purpose beyond procreation (though midwifery seems like the gentlest of departures).

Goldbloom shows where Surie’s ambivalence leads: both to (possibly avoidable) tragedy and also to reconciliation, a tender return to marital love. “On Division” is about rebellion, but also about how rebellion can fade into accommodation, and about how that compromise can seem, in the end, sweetest of all.

Pregnant At 57, A Woman Finds Tragedy And Reconciliation