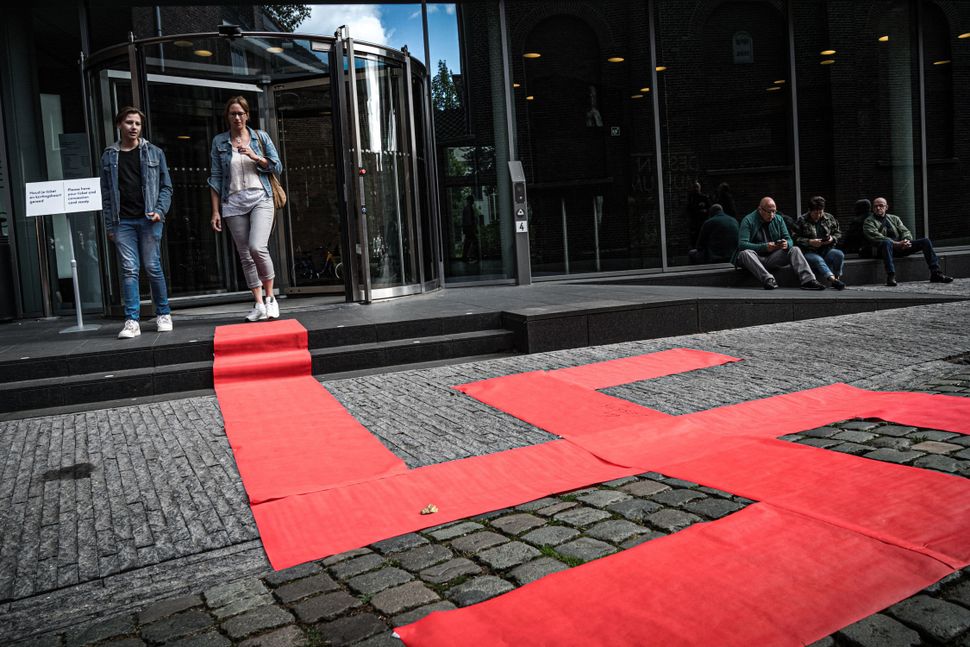 A picture taken on September 8, 2019 shows a swastika formed with red carpets by artist Ralph Posset during the opening of the exhibition “Design of the Third Reich” at the Design Museum Den Bosch. Image by Getty/ROB ENGELAAR/Contributor

A Netherlands museum’s multimedia exhibit on design in Nazi Germany has drawn protests and condemnation over fears that the show does not do enough to contextualize its provocative content.

“Design of the Third Reich,” now running at the Design Museum Den Bosch in the Dutch city of ‘s-Hertogenbosch, features the propaganda films of Leni Riefenstahl and Nazi posters alongside more innocent-seeming items like oak trees and a Volkswagen Beetle. But while the exhibit was intended to draw attention to a German period often ignored by art institutions — the years between 1939 and 1945 — some are questioning the decision to put the aesthetics of this time in the spotlight.

At the exhibit’s sold-out opening September 8, around a dozen members of a Dutch antifascist group demonstrated outside the museum, The New York Times reported, while local artist Ralph Posset spread a swastika-shaped carpet at the entrance, and urged visitors to wipe their feet on it. As Art Newspaper reported, the protests were organized by the Dutch Communist Youth Movement.

“There is a real danger that a beautiful exhibition about the ugliness of fascism might contribute to the normalization of such discourses in the public space, and therefore, the neutralization of those dangers,” Maria Hlavajova, the director of BAK, a Utrecht-based art space that hosts a long-term exhibition and learning program called “Propositions for Non-Fascist Living,” told The Times.

According to Timo de Rijk, the museum’s director and the curator of the exhibition, many early critics — identified by him, in a June 17 op-ed on Artnet as antifascist groups, communists and socialist groups — had not seen the exhibition, and began attacking it, before it had even opened, as potentially incendiary. Skeptics like Hlavajova argue that the museum risks glorifying Nazi imagery at a time when populist right-wing factions are on the rise in the Netherlands and Europe.

De Rijk argued that the artifacts on view — which include swastika flags and designs for gas chambers at Auschwitz — have unfairly been kept from display at art institutions while being a regular feature of historical museums. This exclusion, he says, deprives viewers a chance to analyze fascist aesthetics, a key part of Nazi dogma.

“In the academic world, in which I worked for many years as a professor of design history, the art and design of totalitarian regimes is an established field of research, making it hard to understand why an exhibition on the subject would be questioned,” de Rijk wrote. “[T]he museum is still primarily a public space in which history can be displayed and understood in all its facets. And because the systematic absence of one of the most important periods of the 20th century makes it impossible to achieve a balanced analysis of our own time.”

One thing de Rijk did not address in the op-ed was the controversy caused by his own comments. In a February 2018 interview with the Dutch newspaper De Volkskrant, announcing the show, de Rijk stated that the culture surrounding Dutch museums was “too feminine,” according to a translation from The Times.

“Apparently, more women work in the design departments, and homosexuals, by the way,” de Rijk said. “That is of course a cliché, but the museum world seems to repeat those clichés.”

De Rijk stated in his op-ed and to several outlets that he and his colleagues are taking care not to glamorize the Nazi artifacts. A film played before the exhibit explains the racism inherent in “volk culture” de Rijk told The Guardian and The Times notes that wall texts explain the anti-Semitism and racism of Nazi ideology. The Dutch News reported the museum’s effort to ban photography, for fear of promoting Nazi images on social media.

Hanna Luden, director of the Center for Information and Documentation on Israel in Amsterdam defended the exhibition in a radio interview with PRI, saying the curators have “done their utmost… to keep the exhibition under control.”

When asked if the museum had done enough to stop Neo-Nazis from appropriating the exhibit for their own purposes, Luden said, “I don’t know. This is a big risk which they have taken… you don’t know if they will succeed. I do hope so, because it is important for everybody to learn more about the Nazi period.”

Refusing to show and study Nazi objects in art museums, de Rijk argued in his op-ed, “amounts to nothing less than a desire to forget history: an omission that risks making fascism actually seem mysterious and attractive.”

Luden believes the exhibit may be instructive, teaching the public how the Nazis went about manipulating the German people through art and design.

“I think it’s quite well-known what the Nazis did with propaganda and with speeches. But they also did that with architecture, they did that with lots of manifestations,” Luden told PRI. “People should understand how these things work so they don’t accept being manipulated again.”