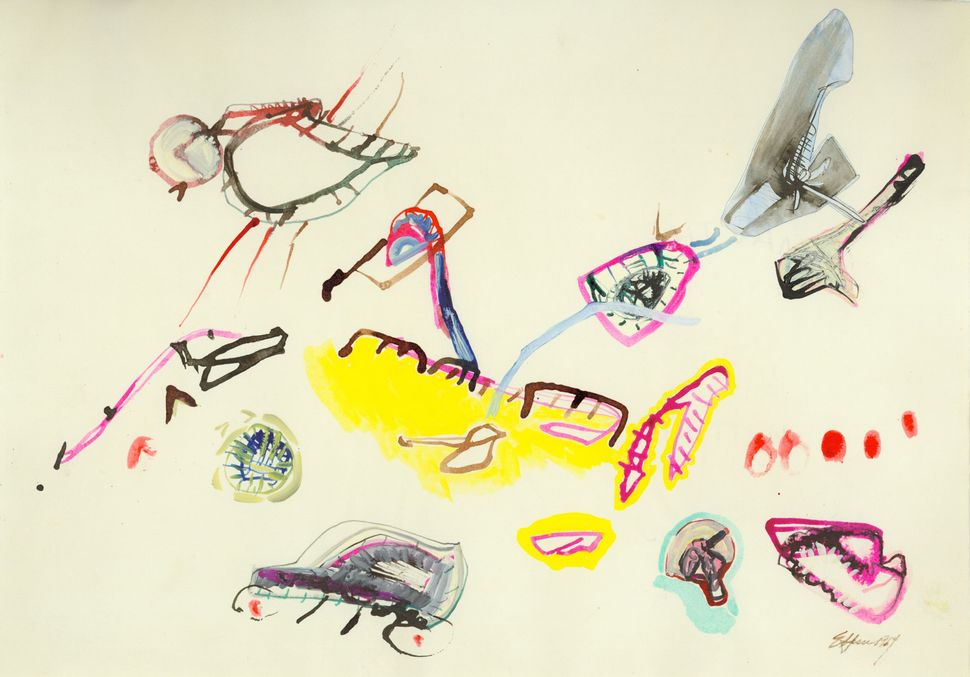 It is, I think, no melodramatic overstatement to describe the artist Eve Hesse’s life as essentially tragic. As a toddler, she barely survived World War II, having been sent from her Hamburg home to Holland on the Kindertransport with her older sister Helen. Later, she watched her mother destroy herself after learning that her own parents had perished in the camps. And, in 1970, at the age of 34, she died of a brain tumor, just as she was beginning to get recognition for her fiberglass, latex, rubber and resin sculptures. Daring, even reckless in her art — whether fairly or not, it has long been suggested that Hesse’s use of toxic materials contributed to her illness—Hesse had the sort of heartbreaking beauty that is made for an obituary, made for posthumous fame, made for casting back onto her work.

How stunning, how bracing, then, to encounter her drawings, many of which are colorful, even joyful, brimming with humor, with winking, dancing, living. Here she is thinking and planning, countering the notion of someone who was too self-destructive to look forward, too self-serious to be playful. “Forms Larger and Bolder: Eva Hesse Drawings,” a show of some seventy pieces on paper made by Hesse, and currently on view at Hauser & Wirth, takes its title from a line in a letter Hesse sent to her close friend, the artist Sol LeWitt: “Drawings — clean, clear — but crazy like machines forms larger + bolder articulately described so it is weird they become real nonsense,” she wrote, describing the work she was making during a residency in a former textile factory in Germany. Hesse’s drawings from around this time have a clear connection to the discarded, old machine parts she would have encountered around the factory, and they suggest an interest in systems, arrangements, in the way things come together, hang together, if only precariously or temporarily, in seams and joints and moving parts. They prefigure the sculptures Hesse would make, hint at the complexity and mystery of the boldly idiosyncratic works with which she is now so closely associated. 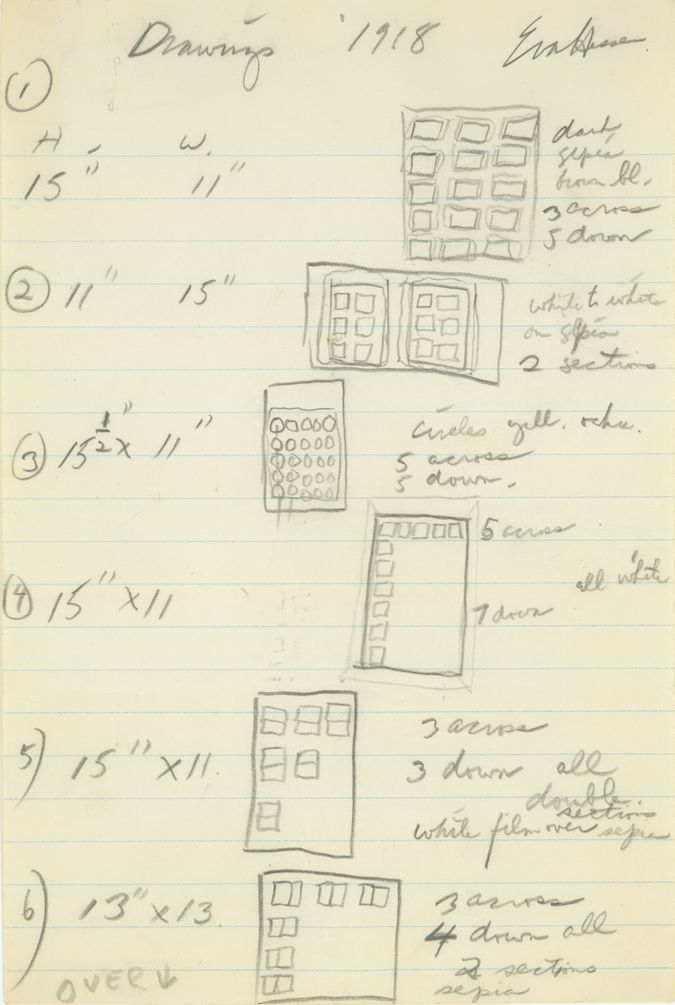 “Forms Larger and Bolder” is taken from the Eva Hesse Archive, more than 1,500 items held at the Allen Memorial Art Museum at Oberlin College, where Hesse’s drawings were shown in 1968, following a two-day visit by the artist. (The Allen Memorial was the first museum to acquire a sculpture by Hesse, purchasing “Laocoön,” a massive ladder that appears to be falling apart, in 1970.) She had struggled to find the right forms for her vision, and painting was proving inadequate as a vessel to contain and carry all that she had to say. But drawing seemed to come easily, a kind of vernacular that allowed her to plan but also to escape planning. Some of the pieces from 1963 and 1964, composed in ink, color pencil, gouache, watercolor, graphite, and containing collaged elements, posit a kind of uncomplicated delight, the sort that often gets called “childlike” but is perhaps most—or only—meaningful in adulthood. They are melodious, they seem to hum a little tune, like a Kandinsky crossed with a Cy Twombly. Others, from the late 1960s, are diagrams, sketches for projects, notes, ideas, marginalia, the in-the-moment process of a mind at work, of hands preparing to make. She is alive in these works, thinking, figuring out, seizing the day, though of course that excitement now contains within it all that came too soon after, all that would go unrealized. The tragic shortness of Hesse’s career gives an almost unbearable weight to her doodles, invests her sketches with sublime significance. But these pieces do bear that weight with grace, with grit. They confirm Hesse’s stature as an artist, as someone who turned everything she made into art.

The intimate setting of Hauser & Wirth’s uptown townhouse gallery serves the works particularly well. During the preview, sunlight streamed brightly into the gallery windows, and the drawings reverberated with the energy of late summer turning to early fall, the moment just before possibility and hopefulness begin to shade into the anxiety of endings. They attained acoherence, the unity and power not of tragedy — though tragedy was close to them — but of the joy and the toil of artistic conception, of hands and pencils and paper trying to keep up. Untitled, the pieces suggest an evolving narrative, moving from dark, as in photograms and India ink or black and brown ink works from the late 50s, to the bright vivid reds and greens and yellows of the mid-60s to the ink and graphite minimalist blueprints of the late 60s. But I keep returning to two watercolors from 1953, vases filled with multihued flowers, blooming past the page, and I don’t particularly love plants or pictures of them, but these are somehow so alive and complete and hopeful, so large and bold they make it seem, if only for a brief incandescent moment, that winter may never come.