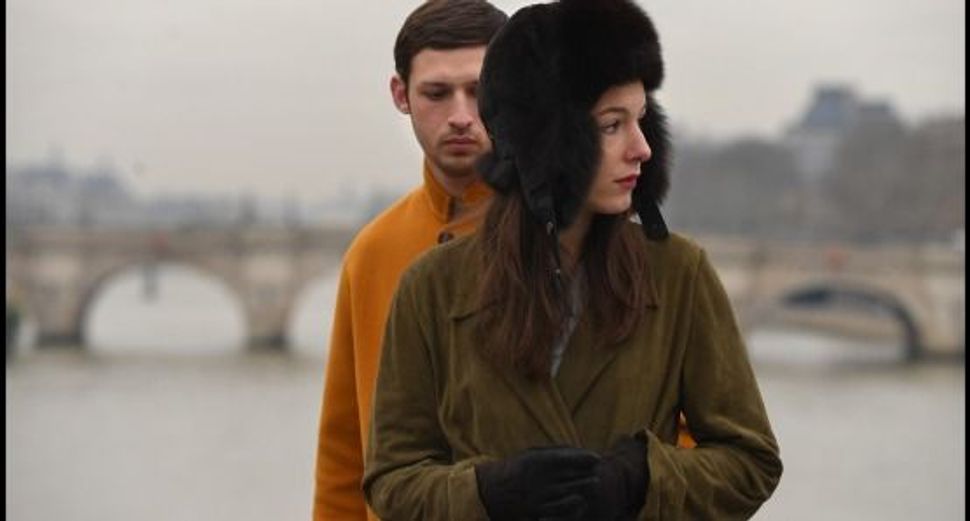 A scene from Nadav Lapid’s “Synonyms” Image by Kino Lorber

It makes a certain sense that Yoav, the protagonist of Nadav Lapid’s film “Synonyms,” is more or less introduced to us with his penis out.

Yoav has arrived in France to escape his Israeli identity, and his various attempts to capture “Frenchness” give the film its episodic shape. Backpack in tow, he arrives to an empty apartment to which he’s been left a key. He then takes a quick shower, and gives his member a few affectionate tugs, before emerging to find that all of his things have been stolen. The neighbor who eventually finds him passed out naked and nearly frozen in the bathtub sizes him up by eyeing his crotch and remarking, “circumcised.” Later, Yoav will sit in a class explaining national iconography to immigrants preparing for French citizenship, where he will be told that, “the cock is French because he’s strong and brave and gets up early.”

If this last detail seems less directly related to the others, it’s worth remembering that “Synonyms,” which won the top prize at the Berlinale, is very much a movie that lives up to its name. Like his protagonist, Lapid escaped his homeland for a spell in the cultural promised land of Paris, and taught himself French through a system of synonyms. In the film, this figures as the absurd task of memorizing the dictionary — specifically, a French-Hebrew dictionary that Yoav picks up in the bookstore early in the film — leading our protagonist to mutter French words to himself as he powerwalks through the city, cutting a figure both comic and deranged. Yet Yoav’s logorrhea has higher stakes. “I wanted to stop being Israeli and become French, abandon what I knew and reinvent myself,” Lapid told Cinema Scope about his years in Paris. “French became a pathway for redemption. Each word I studied was a triumph over the past.”

But as anyone who has lived abroad knows, you never feel yourself to be more a product of your homeland than when you leave it behind. If Yoav’s reasons for leaving Israel don’t seem very refined, neither are his ideas of what makes France French — he tellingly chooses to decorate his apartment with postcards bearing the likenesses of Napoleon and Kurt Cobain. Early in the film, he’s gifted a Parisian wardrobe by his new friend and self-appointed guardian Emile (Quentin Dolmaire), a trust fund litterateur who gamely displays all of the affects of a serious author except for, you know, the writing. Yoav uses the handsome shirts to clog up a hole in the wall of his dingy apartment and wears his fashionable yellow wool coat over a tank top. Rather than integrate more fully into French society, he gets a job at his country’s embassy, hanging out with a couple of rather aggressive embodiments of Israeli militarism. Later, he objectifies and exoticizes himself in one of the more uncomfortable depictions of porn production in recent memory, posing nude for a greasy Gallic skeeze artist who will eventually enact a certain vision of Middle Eastern politics by having Yoav screw an Arab girl, presumably for the enjoyment of like-minded continental onanists.

Depicting a nation in the throes of spiritual crisis through the travails of one of its more clueless citizens as he bumbles his way through the wider world, “Synonyms” might invite charges of self-loathing, both as regards its protagonist and its creator. Yet it’s also keenly aware of such accusations and even seems to deliberately leave itself open to them; and in this way it offers a good window into what we talk about when we talk about self-hate. The funny thing about the discourse surrounding Jewish self-loathing is that it reveals much less about how Jews feel about themselves and much more of their enmity towards one another. This dynamic is particularly heightened in an age when anti-Semitism is once again rearing its ugly head, right alongside the nationalism and chauvinism that have accompanied it historically — and the appearance of the latter within Israel itself have only further escalated the vitriol. In such an environment, no one wants to be seen as aiding the Fascists, and accusations of self-loathing have been of particular use in the rhetorical contortions of right-leaning Jews hoping, if not to justify their own allies, than at least to bring the others down to their level. “Synonyms” is unlikely to win many adherents among the segment of the American Jewish community given to such rhetorical maneuvers, but they may at least find it somewhat reassuring that its existence implies that the rancorous divisions they find squeamish at home exist in a similar form in the Jewish homeland.

The casting of Tom Mercier as Yoav, an embodiment of conflicted Israeli identity, is inspired. A former judo champion who quit abruptly at 19 to pursue dance, Mercier delivers a fearlessly physical performance. It helps considerably that he’s the rare young actor genuinely unafraid to play dumb without adding some knowing touches to let the audience know that that he is indeed in on the joke (Carloto Cotta and Robert Pattinson are other contemporary actors who have embraced the role of hot dumb guy, which is good company to be in). Yoav isn’t a total dunce — he has an effectively idiosyncratic way of telling stories and a real sense of principle, however high-handed—but he’s almost universally perceived primarily in terms of his body, whether by his fellow security toughs at the Israeli embassy or by Caroline (Louise Chevilotte), Emile’s girlfriend who starts laying the couple’s hunky charge. For all his obsession with language, a concern shared by Lapid’s previous film “The Kindergarten Teacher,” Yoav is curiously unable to express himself for reasons that seem to go beyond the language barrier. If it’s easy to read multiple different motivations into his revolt against his national heritage, this is in part because Yoav himself is unable to unwillingly to define exactly what he’s doing.

Over the course of the film, Yoav emerges as a sort of comic inversion of the old stereotype of the diaspora Jew, a figured maligned by Zionists and anti-Semites alike as weak, effeminate, and generally lacking in national vigor. If the diaspora Jews of old were overly accommodating, physically weak, and hyperverbal, Yoav is inarticulate, muscular, and aggressive. Accordingly, he represents the paradoxical victory of a certain idea of Jewish pride. This has its dark side, represented in particular by Yoav’s Israeli friends, one of whom seems to have arrived in France expressly to avenge Jewish victims of violence past and present. One of the film’s most disturbing and bravura sequences finds this man walking through the subway, filmed in a single take, humming “Hatikvah” at the passengers in an attempt to provoke one of them into fighting him. He finally stops in front of an older Arab man, hums closely and loudly into his face while wearing an expression of rage. Yoav, too, falls into nationalist stridency, though he does so on behalf of the French. One of the film’s observations is how many points of contact exist between liberal French nationalism and its more identitarian Israeli counterpart. The more aggressively Yoav pursues his own vision of Frenchness, the more he ultimately embodies the worst qualities of his own country.

Despite the intensity of Lapid’s commentary, he’s largely uninterested in providing prescriptive answers and leaves both us and his protagonist in the middle of an action. While he touches on a full gamut of issues affecting contemporary Jews, he doesn’t stop to cast a firm judgment on Yoav’s peculiar existential mission — though he himself returned from France to make a career in his native land. Nonetheless, “Synonyms” is an effective cri du coeur from a country that he believes to have lost its moral way. Perhaps, the movie implies, Jews should fret less over the length of their manhood and worry instead about the girth of their souls.