IMPEACH: Why The Word On Everyone’s Mind Means So Much More In Hebrew 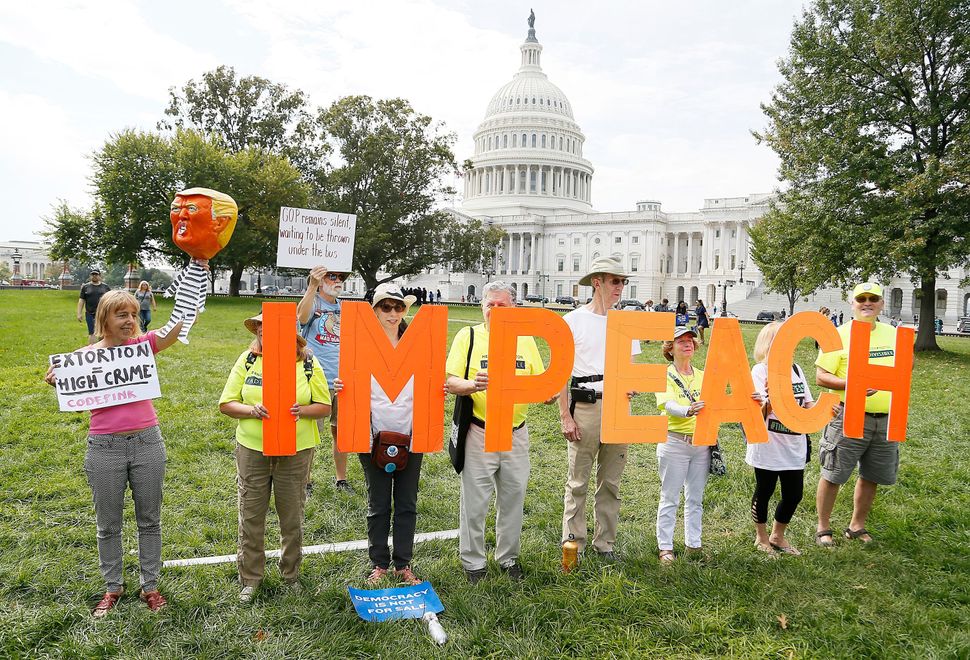 On The Lawn Of The U.S. Capitol: An impeachment rally on September 27, 2019. Image by Getty Images

If this sounds like the parsing of the Mueller report or the language of Article 25, bear with me. It matters because there is an intriguing look-alike word — written with the exact same letters — that has nothing to do with the word that appears in Deuteronomy or in Haaretz.

For the reader exhausted from the news cycle, and using the dictionary as a calming device, it’s hard not to gaze in hope, at that look-alike word just above hadacha with a dagesh in the iconic Even Shoshan Hebrew dictionary. (Shades of voters who saw no difference between Hillary and the Donald came to mind as I scrutinized hadacha number two.) But if you look closely, this other hadacha has no dagesh in the letter daled, and it has an entirely different root. Yet it’s still fascinating to ponder because this hadacha means “rinsing-out thoroughly.”

In contemporary Hebrew, a mediach kaylim is a dishwasher. And boy, are there many voters who just want to press “rinse” on this President. And after all, with a U.S. President who has made lies, hatred, and misinformation commonplace, is it okay to take solace in a word that has the same letters, just the wrong dagesh?

I thought about this question as I looked at an “If You See Something, Say Something” sign. Some of us are seeing something every day, saying something every day, putting politicians on speed-dial, running to protests, and through it all just thinking — isn’t there someone to report this to? I then considered the ubiquitous Hebrew “word” doch, or report, which is made up of an abbreviation for din v’cheshbon, or justice and accounting. It’s in the same pages of the dictionary which parse hadacha.

At this time of year, when the High Holidays loom, both justice and accounting are on everyone’s mind: the inner kind as well as the public kind, and it can seem, for a few weeks at least, that those questions are everywhere, just like the word doch. Permutations of that word can be found in news stories, and in contemporary Israeli fiction. Of course, the Trump presidency may feel like fiction, but it is real — just as the presence of other deeply problematic world leaders is real, and the hatred we have seen is real. And we all know this much is real, too: there will certainly be some necessary cleansing ahead.

In the meantime, for those who are exhausted by the news cycle, or perhaps, by the endless discussion of “impeachable,” I recommend focusing on the Hebrew word hadacha, with a dagesh and without. Consider how much this period in time — this little dot in the grand span of human history — has made us stray from our path. Consider the false prophet, or perhaps, false prophets, that have come into our midst. And then take out the dagesh, and take solace in an ancient word of cleansing. Think rinse. Think suds. Then let your mind wander to din v’cheshbon, justice and accounting, abbreviated or not, labeled “impeachable” or not. Think a national — and perhaps, global—cleanse of all of this, just in time for the personal and communal cycle of teshuva, repentance.

Let this be the year we return to a just path, cleansed.

IMPEACH: Why The Word On Everyone’s Mind Means So Much More In Hebrew