Catching My Breath At Sinai On Rosh Hashanah 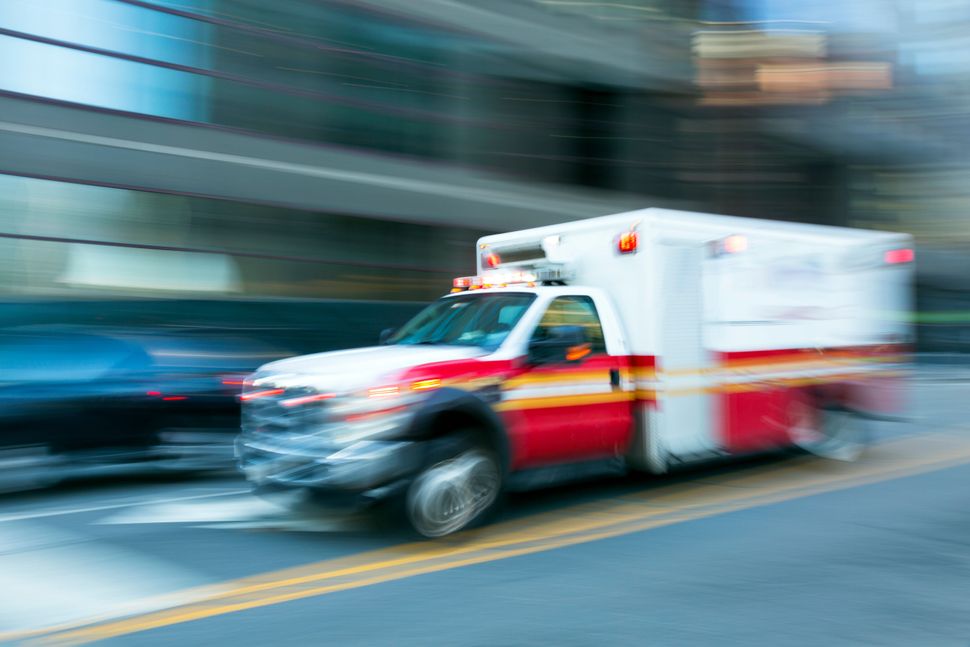 An ambulance in NYC Image by IStock

“Got a second?” I asked Dr. Doug, measuring the time with great care.

I lay on a gurney and flipped on the speaker. The chief surgeon, his white coat identifying him as “Ram Reddy” stood over me. Ready.

My ATT signal wasn’t working at Mount Sinai (the one on Madison Avenue and 101st Street) so we were using one of the nurses’ flip phones. It was after midnight and I’d awakened my old friend, now a dean and doctor at Temple University in Philadelphia.

Dr. Reddy explained to Dr. Doug: Three hurricane-like blood clot systems were on the move in my lungs and heart, a “saddle” embolism. A basketball ankle injury in a Chicago game and 13 hours round trip for work between Boston and New York in Megabuses — who knew this could be a fatal combination to an athletically-fit visiting nonprofit director? For that matter, who knew that about 100,000 Americans die each year from PEs?

The doctors exchanged details: injecting clot-busters could be fatal. Open heart embolectomy appeared the best among not very good options. I thought of my late dad, who hated hospitals so much that he was willing to die years ahead of his time just to say he’d avoided them. I thought of Rosh Hashanah, a few days off and Yom Kippur next. As a writer, I did want to stay current with the book of life. I requested one psalm before the anesthesia: Wilco and Billy Bragg’s “Mermaid Avenue” album, maybe on Spotify? They apologized — it would be a very limited musical selection for emergency surgery.

If I could, I would describe in detail to the dear shofarot-approaching reader each of the voices, faces, breaths, dye-and-contrast injections, IV alarms, fetal position ultrasounds, CTs, EKGs, magisterial opinions, short stories, I encountered during those critical hours at Sinai. My background is Midwestern, however — less “Humans of New York,” more Algren’s “City on the Make.” Still, here is my journal, two years later, when the docs say you’re in a steady hemato-critical state, for me, a good state. It is time to say “thanks” to the New York that is ready (and Reddy) to rescue you.

So here’s to 89-year-old great cousin Gil, a retired Manhattan court reporter, and among the last of the clan to bear the garment district family name, Sanders. He hailed the cab from East 92nd Street to urgent care. To the Yellow Cabby who was still there to be hailed without a smart phone. To Dr. Tatyana at City MD, who looked at the EKG and in a Russian accent howled at me: “Why you don’t take better care of yourself? Get to Sinai!” To Gil again, who hailed another Yellow Cab (“faster than ambulance,” opined Dr. Tatyana), whose Pakistani driver took his instructions like a military officer and followed the one-ways as instructed to drop us at Mount Sinai Hospital. Except we neglected one thing. The main entrance is still a ways from the ER. I edged the half block like a supplicant in thin air, hands along the wall.

Here’s to Dr. Bogaert in the ER, she who said, “Yes, like Humphrey.” To the maybe 30-year old woman to my left with the torn patella and the allergy to morphine and the young teen to my right whose family was draped over her saying, “Baby, that sickle cell has never been like this. Hold on!” To the heavily wheezing elderly woman whose two daughters looked like they were absorbing her last hours. To ER nurses and techs, Anice, Pedro, Dane, Joan, Juliette, Amal, Sal, most of New York Nurses United, and some said to be SEIU. To the two angels from “Wings of Desire,” who, I swear, were sitting in the corner of this ER searching for an author. To mysterious Sima who roved around to offer “chesed 24/7,” she said. To the “Medicine Team” of new residents, Dr. Huang and Dr. Brooks. To my first ever cardiologist, Dr. DiStefano, who said: “you’ll be back on a basketball court within six months.” (Though he then thought embolysis and a good night’s sleep would be my next 24 hours.) To the cardiology fellow, Dr. Murphy, who laughed when I reminded him in the September wind-down to the season that the Cubs’ goat had been named “Murphy.” He said “good thing the curse was lifted.”

To the stoical all-Asian radiology team that gathered in front of me, who all at once nodded as the catheter clot-busting procedure was described and then soon discarded. To Dr. Goldman, in black knit kippah, who inconspicuously arrived like an orderly at 11 p.m. with the “poor man’s echocardiogram” and cradled me like a baby for fifteen minutes, ordering his resident to screen shoot the “saddle”— veins and arteries and chambers of my heart, Valentine’s Day every five seconds. They showed me the hurricanes as they swirled. Afterwards, I asked him if I could tap my kid an email while the surgical team gathered. He deadpanned something like “sure, you’ve made it these 30 minutes, you probably have 30 more.”

Hours later, when I came back to life (and after the breathing tube was out) I heard … French. No, Haitian Creole. An ICU nurse and tech were bantering. I rasped, ”Bienvenues!” They looked shocked that I might have understood the commentary about their tough overnight. The tech was hauling a big x-ray machine just for me.

She announced herself in English very formally and with grace, but with my name, not hers: “Jonathan! The Biblical good friend!”

I tilted my head. “What is your name?” I asked.

I said, “You may take my X-ray. But do you take Vashti or Esther’s side?”

Jean, the Haitian ICU nurse, seemed overwhelmed by all this and asked, “You’re Christian?”

To the ventilator removers, the drain removers, the stitches removers, the IV installers, the first ICU nurse Ricardo, the second ICU nurse (you’ve met Jean), to Sonia from Uzbekistan and Lyuba from Azerbaijan. “Lyuba”? I asked. Well, what do you expect in an ICU heart section: “It means ‘love.’” To waking up, dammit. To finding your breath again two days before Rosh Hashanah with the gates wide open. With your son nearby, your brother from Bard, your old friend and baseball teammate, Dr. Doug, who’d made you feel like it was just another at-bat under the lights, at midnight somehow.

To master surgeon Dr. Reddy, of course, and his colleague Dr. Vaishnava. To Cardiology Care nurse Tomoyo, to PAs Shah and Weisman. To my first walk, in which I asked myself (off the hallucinatory Dilaudid but with a big oxygen tank rolling at my feet), is this how Jonah felt for 12 hours, nurtured by sacred waters, secret caretakers, hisses of rare oxygen?

My oxygen tanked/Sea Hunt walks grew to small first workouts up the stairs, along corridors, past the gorgeous but mostly-silent grand piano in the center of Sinai.

As I took these walks, I mulled perhaps the biggest mystery of them all.

I had called the chaplaincy office to ask for a visit with the rabbi. A knock at the door followed efficiently. It was the colorfully-stolled Kaytlin Butler, a Presbyterian minister-in-training. We had a lovely and spiritual conversation. Another knock, and in came lay minister and D Div. Apolinary Ngirwa. He told me about his global chaplaincy, beginning in Tanzania, and his human rights and education advocacy. Eventually, a lay Jewish representative brought me a bag of kosher dehydrated apples and a New York “Big Apple” pencil. As I contended with this effable efes, my son snuck in a bagel and belly lox from Zabars. We listened to Leonard Cohen’s “Who By Fire” on his iPhone.

Another knock. It was a FedEx package: a Catholic friend from hometown Madison, WI had shipped me a fully-stocked Rosh Hashanah case with pomegranate, apples, honey and a prayer sheet.

After six days, despite Ruth Esther, deep Jonah plunges, 200 human rescuers, and a hospital nation of awesome Samaritans, the one figure that never appeared in this heart of New York?

Shana tova u’ metukah, New York, and beyond. To your healthy and happy New Year.

Catching My Breath At Sinai On Rosh Hashanah