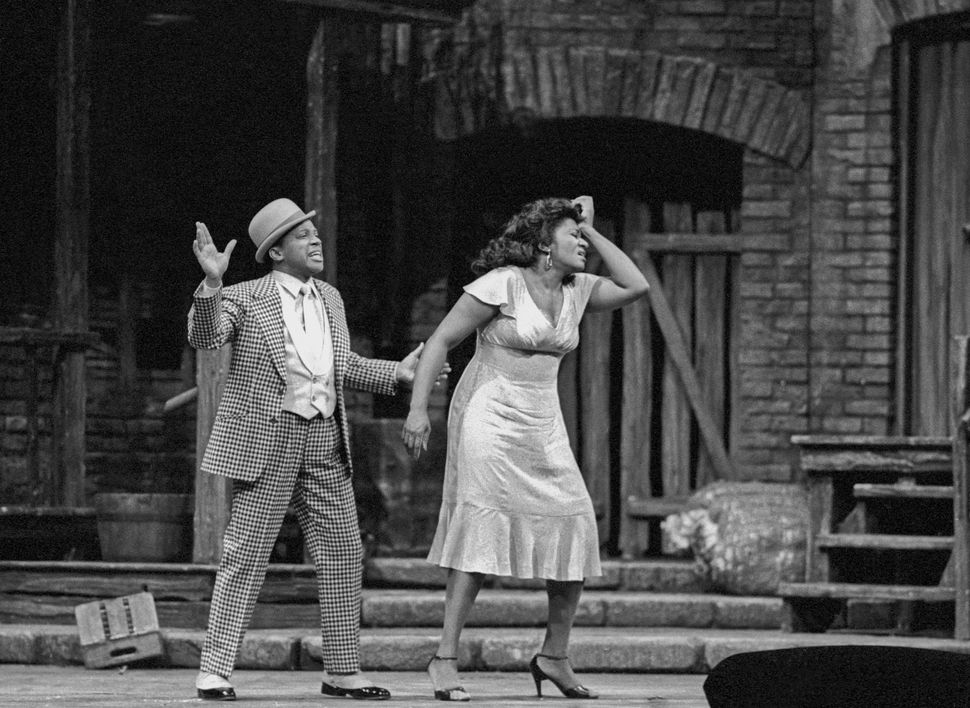 Suppose, instead of adapting the white Southerner DuBose Heyward’s 1925 novel “Porgy,” the Russian-Jewish American composer George Gershwin took on the Russian-Jewish Russian writer Isaac Babel’s 1926 play “Sunset.” Imagine a Gershwin folk opera set in a Jewish ghetto, rather than African-American slum, not populated by the poor people and criminals of Catfish Row but those of Moldavanka.

Or maybe, to continue the thought experiment, an opera set in a shtetl. That almost happened. Five years before “Porgy and Bess” had its world premiere on Broadway in October 1935, Gershwin was engaged to write an ambitious show for the Metropolitan Opera. Its source was S. Ansky’s play “The Dybbuk.”

Gershwin’s “Dybbuk” was scheduled for April 1931. Then it was discovered that the rights to the play had already been obtained by an Italian composer, Lodovico Rocca, who premiered his opera at La Scala in March 1934. Gershwin moved on to another project: “Porgy and Bess.” By the time Rocca’s “Dybbuk” played Carnegie Hall in May 1936, “Porgy and Bess” had closed on Broadway — a disappointing run after mixed notices. Now it’s back in a new production at the Met, along with all the baggage the classic folk opera has toted since its premiere 84 years ago.

Born in Brooklyn to Russian-Jewish immigrants, Gershwin — characterized by the critic-historian Alex Ross as “the ultimate phenomenon in early-twentieth-century American music… in whom all the discordant tendencies of the era achieved sweet harmony” — was a trained musician who swerved into popular culture and crossed back, moving from the pop ragtime of “Swanee,” a massive hit for Al Jolson in 1919, to the concert jazz of “Rhapsody in Blue,” first performed by the Paul Whiteman orchestra in 1923.

Gershwin was also the crown prince of those Jewish American musicians who built their career on the foundation of African-American culture. “Porgy and Bess” may be the greatest single example of this fusion. Or is it simply an appropriation?

In “The Crisis of the Negro Intellectual,” Harold Cruse called “Porgy and Bess” “the most contradictory cultural symbol ever created in the Western world” which is one way to characterize Gershwin’s genius for miscegenatin’ rhythm. Where the jazz critic Rudi Blesh termed “Porgy and Bess” “Negroesque,” fellow composer Duke Ellington, an initial critic of the opera who later came around, saw it as a kind of musical gumbo: “Mr. Gershwin didn’t discriminate — he borrowed from everyone from Liszt to Dickie Well’s kazoo.”

Indeed, “Porgy and Bess” incorporates elements of jazz, pseudo jazz, spirituals, and opera, as well as Jewish liturgical, Gullah, European romantic and avant-garde music. In 1932 Gershwin began studying with the composer-theorist Joseph Schillinger, a Russia’s leading apostle of syncopation, recently relocated to the US. Ideas regarding dissonant chords and rhythmic organization that, perhaps first intended for “The Dybbuk” informed “Porgy and Bess.”

Jewish musicians have had little difficulty finding affinities. In an unpublished interview cited by the musicologist Mark Slobin, the Broadway composer Jerry Bock linked his “Fiddler on the Roof” to “Porgy and Bess.” Both “stayed within their respective pale [sic], closer to the ground from which their immigrant roots took hold. In that sense I feel they have a spiritual attachment as well as a theatrical one.”

“Summertime” has been said to draw on the Yiddish lullaby “Lulinke lu-lu.” (According to Hollywood composer Bernard Hermann, Gershwin was concerned that audiences might find the tune too Jewish.) “It Ain’t Necessarily So” has been identified with a well-known nigun and claimed to be structured after a haftora. It’s been pointed out that one only need to shift tempo to find a resemblance between “It Takes a Long Pull to Get There” and “Havenu Shalom Aleichem.” But then, according to the klezmer Frank London, “the most facile of all fusion/synthesis musical equations is ‘Melody from culture A + Rhythm from culture B.’”

The radical klezmer Eve Sicular suggested that three other songs, “My Man’s Gone Now,” “Bess You Is My Woman Now” and “A Woman is a Sometime Thing” could all lend themselves to a “Yiddish sound.” In the late 1990s, both the Argentine clarinetist Giora Feidman and the Minnesota Klezmer Band put out albums reinterpreted Gershwin as a klezmer, including three of the afore mentions songs plus “There’s a Boat Dat’s Leavin’ Soon for New York.”

If indeed Gershwin appropriated African-American musical forms, “Porgy and Bess” was triumphantly reclaimed by Billie Holiday, Sidney Becht, Miles Davis, Louis Armstrong, Ella Fitzgerald, Nina Simone, and the Modern Jazz Quartet, to name a few. “The score,” as Ross notes, “invites considerable freedom of interpretation.” So why not that which has been most found objectionable, namely the book?

Theatrical estates are notoriously protective. Anne Bogart ran afoul of one when she directed an NYU production of the Rogers and Hammerstein musical “South Pacific” set in a VA hospital. Arthur Miller served another mid 1980s avant-garde production, the Wooster Group’s LSD, with a cease and desist letter for its incorporation of material from “The Crucible.”

Because it was initially feared that “Porgy and Bess” might be turned into a minstrel show it has long been stipulated that that only black actors can be cast. While this stricture arose out of concern that the opera might be staged in blackface, Cruse took an opposite position, asserting that, “No Negro singer, actor, or performer should ever submit to a role in this vehicle again. If white producers want to stage this folk-opera, it should be performed by white performers made up in blackface.”

Forget blackface, would it not be at least interesting to stage an experimental Yiddish-inflected “Porgy and Bess,” set to a bulgar backbeat in the underworld milieu of Babel’s Odessa? The two Sportin’ Life songs, “It Ain’t Necessarily So” and “There’s a Boat,” would immediately take on whole other meanings. I asked the musicologist, historian and klezmer revival pioneer Henry Sapoznik if it were possible to produce a klezmerized “Porgy and Bess.” “That it can be done goes without saying,” he replied. “That it hadn’t been done speaks to taste and restraint.”

Point taken but, as the song says, it ain’t necessarily so—even though, as things stand, it would be impossible to find out.