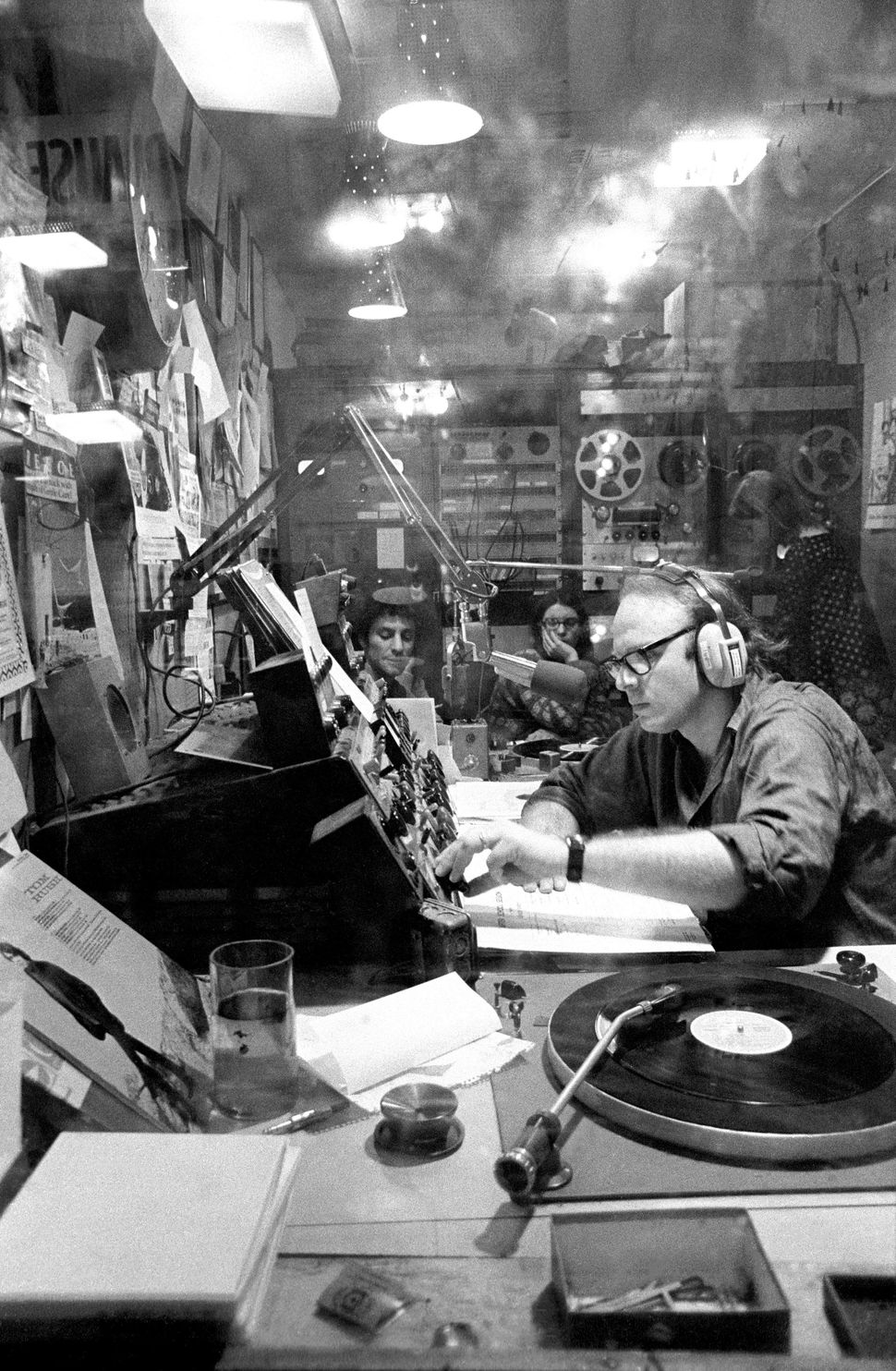 Is it time to say Kaddish for WBAI — or should we summon some rabbis to exorcise it?

The legendary listener-supported radio station, once a counter-cultural institution that actually had an impact on the culture, finally lost its voice earlier this week. After decades of declining audience and financial support, the Pacifica Foundation, which acquired the station in 1960, padlocked its Brooklyn officers on Monday and started airing network programming over its 99.5 FM frequency. The last thing Pacifica or WBAI can afford is a legal battle over the New York outlet but that’s clearly what is brewing.

WBAI was not a formally Jewish project, but like so much of the counter-culture, Jews played an outsized role in the station. Its greatest on-air personalities, including Bob Fass, Steve Post and Larry Josephson, were members of the tribe, as were two of its key benefactors, construction mogul George Fox and Carolyn Goodman, the mother of the slain civil rights worker Andrew Goodman.

Yet it could be argued that WBAI was, well, bad for the Jews, with a litany of on- and off-air incidents that unfolded in the decades after the civil-rights movement, as blacks and Jews became increasingly alienated from each other politically.

And so, like many in the extended WBAI family, I find myself wishing they’d pull the plug already but I also know that it would be a shame to see the place die.

A girlfriend first turned me on to WBAI in college, back in the early 1970s, and I instantly loved this station that championed free speech and prided itself on being a thorn in the side of the establishment. Listening to Bob Fass do his free-form midnight show, “Radio Unnameable” made me want to work in radio. A few years later I became a staff reporter at WBAI, which some of us jokingly referred to as Manson Family Radio. Sure, we had more than our fair share of crazies, but we were rightfully proud of our coverage of the civil rights movement and for serving as a bullhorn for peace activists during the Vietnam War.

In the mid-1990s, though, I wrote a series of articles exposing anti-Semitism at the station, the details of which I will walk through below. It recovered, somewhat, but also never really, and in many ways we’ve all been waiting for what seemed like the inevitable end.

“I haven’t listened to it in years,” said Larry Josephson, 80, the original bad boy of morning radio on BAI who served as station manager from 1974 to 1976. “There’s still no programming that will appeal to enough people to send in enough money to pay the bills,” he added. “That’s basically the problem.”

A former member of Pacifica’s national board, who spoke to me on the condition of anonymity, said he had “very little hope” that the station would be reincarnated amid the current crisis and that there’s no money to rebuild an audience.

“BAI’s been this source of perpetual heartbreak, because over the years a lot of brilliant programming has come out of there that the rest of the network has benefitted from,” the former board member said. “It’s been heartbreaking because a lot of us have been rooting for WBAI to pull itself out of a nosedive for a very long time now.”

Marty Goldensohn served as WBAI’s news director in the mid-1970s before moving on to WNYC and other public-radio posts. Goldensohn, now a podcast producer, recalled the glory days, saying WBAI “was always way ahead of its time.”

“When no one had heard of the dangers of Genetically Modified Organisms, the late Gerry Hatch was making documentaries warning of GMO’s.” he recalled. “She was not foolish or alarmist. Only at WBAI was she free to report what the science told her. The culture came around.

“And when gay rights were unthinkable, WBAI was out of the closet, encouraging equality and love, daring to speak its name. The culture came around,” Goldensohn continued. “When the Women’s Movement was considered extreme and marginal, WBAI aired revealing conversations among women making it clear that the personal was indeed political. The culture came around.

“WBAI was there when we needed it most. Too bad if it can’t keep doing that revolutionary work.”

Even back then, though, there were hints of the ugliness that was to come. The incident most listeners are aware of is the reading of the infamous “Jew Boy” poem on Julius Lester’s show during the contentious Ocean Hill-Brownsville teacher’s strike in 1968. Lester, who converted to Judaism years later, defended the reading as a valuable expression of community sentiment. The Jewish Defense League protested outside WBAI’s East 39th Street headquarters.

And then it got much worse. I also found a persistent pattern of Hasidim-bashing at WBAI as well as at other Pacifica stations, including WPFW-FM in Washington, D.C., where Malik Zulu Shabazz, then a Howard University law student, hosted a program that was cancelled by the station’s black Muslim program director, Askia Muhammad, because it was “unnecessarily provocative” about Jews. My articles about Pacifica’s anti-Semitism problem ran in the New York Daily News, the Jewish Week and The City Sun, an African-American weekly that, God bless it, refused to take ads for “The Protocols of the Elders of Zion.”

The fact that a black newspaper considered charges of black anti-Semitism worthy of some ink got to Samori Marksman, the Caribbean Marxist program director at BAI at that time, who every day wore matching khaki pants and shirt to the station’s garment-district headquarters.

Marksman was one of the anti-Zionists at BAI who denounced Israel for selling weapons to the apartheid regime in South Africa. Other anti-Zionists who found a home as hosts or guests on the station were Al “Grandpa” Lewis, the 90-something “Munsters“ actor, and Professor Irwin Corey, another Jewish nonagenarian, who never refused a joint when it came his way in master control.

But in 1995 Marksman added to WBAI’s line-up a show called “Beyond the Pale: The Progressive Jewish Radio Hour,” hosted by Esther Kaplan and Marilyn Neimark. It seemed like he was doing damage control for the venom that had been spewed on the station.

But by 2001, when I last wrote about WBAI, detailing a bitter struggle involving fired staffers, the remaining renegade staff and a controversial program director in The Forward, the station was a shadow of its former self. “It certainly isn’t your father’s WBAI anymore,” Josephson, the former station manager, told me at the time. Then he wondered, “Is there a need for WBAI when you have so much stuff on the web?”

When I spoke to him again last week, Josephson said the latest crisis reminded him of the 1977 loss of the church on Manhattan’s East 62nd Street that had been BAI’s longtime home. The large sanctuary of the church was turned into Studio C, a space for live music performances.

The station lost the church because it owed a huge amount of back real estate taxes, and the city denied its application for tax exemption as an educational institution. Josephson tells the story of appearing before the board deciding the station’s tax fate, and usually gets a laugh when he gets to the part about a bureaucrat leafing through the station’s program guide and inquiring how a show titled “Techniques of Lesbian Sex” could be deemed educational. That was more than 40 years ago.

There’s a lot of hand-wringing at the moment about whether Pacifica will sell WBAI’s license and frequency and just write off a New York presence.

Reached at his home in North Carolina, where he has continued to do his “Radio Unnameable” show, 86-year-old Bob Fass, said that WBAI is still necessary. “There’s nothing like it,” he put it simply. “Taking the station off the air is suicidal.”

But Caryl Ratner, a former BAI producer who went on to a career in commercial radio and business — and who is a member of the board of the Forward Association — lamented the “slow, decades-long destruction of a magnificent media hub of ideas, culture, debate and talent.”

Particularly irksome to Ratner has been the peddling of potions, tinctures and elixirs by BAI’s best on-air fundraiser, the nutrition guru Gary Null. As far back as the mid-1980’s, Null’s presence was already rubbing some at BAI the wrong way. They put cigarette butts and McDonald’s burger wrappers in his mailbox.

“Much of it is unlistenable,” Ratner said of the latest programming. The station is now “a pathetic relic, and at times an actual parody, of what good radio should be.” At stake is not just the fate of the storied New York station, but, potentially, the whole Pacifica network, which includes stations in Berkeley, L.A., Houston and Washington, D.C., as well as a dozen or so affiliates around the country, small community-based stations that tend not to be NPR affiliates.

Though BAI’s 99.5 FM frequency is said to be worth tens of millions of dollars, Pacifica insiders say that the network’s by-laws create immense obstacles to selling one of the stations’ license and effectively check the national office from exercising authority over local stations.

The by-laws were re-written close to 20 years ago in response to one in a series of seemingly never-ending turf wars within the network, and resulted in a costly and time-consuming process of listener-sponsors electing local board members to oversee the stations. Too much democracy and the financial woes of WBAI, the radio station that gave birth to Democracy Now!, could end up causing Pacifica to bleed to death.

WBAI was given to the Pacifica Foundation by an eccentric philanthropist named Louis Schweitzer, who also started the Vera Institute of Justice, named in honor of his mother who had survived pogroms in Russia. The story is told that when Schweitzer called the Pacifica station in Berkeley and explained that he wanted to give the network WBAI, they hung up on him.

Now, nearly 60 years later, it may be Pacifica hanging up on WBAI again.