Why Were Two Washington Nationals Named For A Canaanite God? 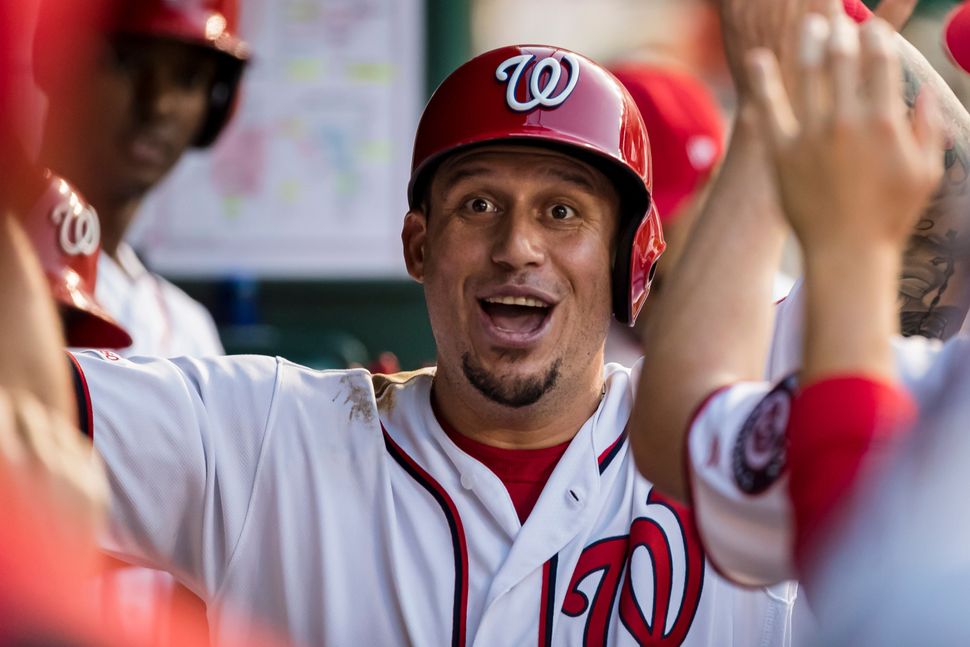 Asdrúbal Cabrera of the Washington Nationals. Image by Getty Images

Now that my home team, the Washington Nationals, is in the World Series, their opponents, the Houston Astros, will find themselves facing a Nationals pitcher named Aníbal Sánchez. A second Nationals player, Asdrúbal Cabrera, played various infield positions until recently and will probably be pinch hitting. Both of these players were born and raised in Venezuela. I have wondered what was behind their rather unusual first names, which I had never heard before they joined the Nationals. The key, it turns out, is in the “bal” ending of the names.

We all know the Bible stories of how the Israelites conquered the Land of Canaan and were warned many times not to associate with the indigenous Canaanites – and especially not to worship their gods. The major Canaanite god, Baal, is mentioned dozens of times in the Hebrew Scriptures, and never in the spirit of inter-religious tolerance.

Of course, Canaanite culture and religion continued despite repeated divine admonitions to the Israelites to destroy their enemy completely. When the Greeks came across the inhabitants of the eastern shore of the Mediterranean, they called them Phoenicians – generally taken as a reference in the Greek language to a purple dye that these people made – though the “Phoenicians” apparently called themselves Canaanites.

The seafaring Phoenicians established an empire across the Mediterranean. By the 8th century BCE, the Phoenician city of Tyre had founded the colony of Carthage in what is now Tunisia. Over time, Tyre and other Phoenician cities faded and Carthage itself ruled over an empire, but the Carthaginians never relented in their worship of the Canaanite/Phoenician god Baal.

Eventually, the Carthaginians came into conflict with Rome’s imperial expansion. This conflict was initially centered largely in Spain, where the great general Hannibal consolidated Carthaginian control. When Hannibal departed from Spain in 218 BCE to attack Rome directly, his brother Hasdrubal took command. Hasdrubal spent years in Spain leading troops to defend Carthaginian dominance in the face of Roman attacks. Thus the names of these two Carthaginian generals became part of Spanish culture – Hannibal, meaning “grace of Baal,” as Aníbal and Hasdrubal, meaning “helped by Baal,” as Asdrúbal.

So that’s why two baseball players from Venezuela appearing soon on your flat TV screen have names that are rooted in the religion of the ancient Canaanites.

Why Were Two Washington Nationals Named For A Canaanite God?