Who To Root For In The World Series — The Jewish Star Or The Underdog? 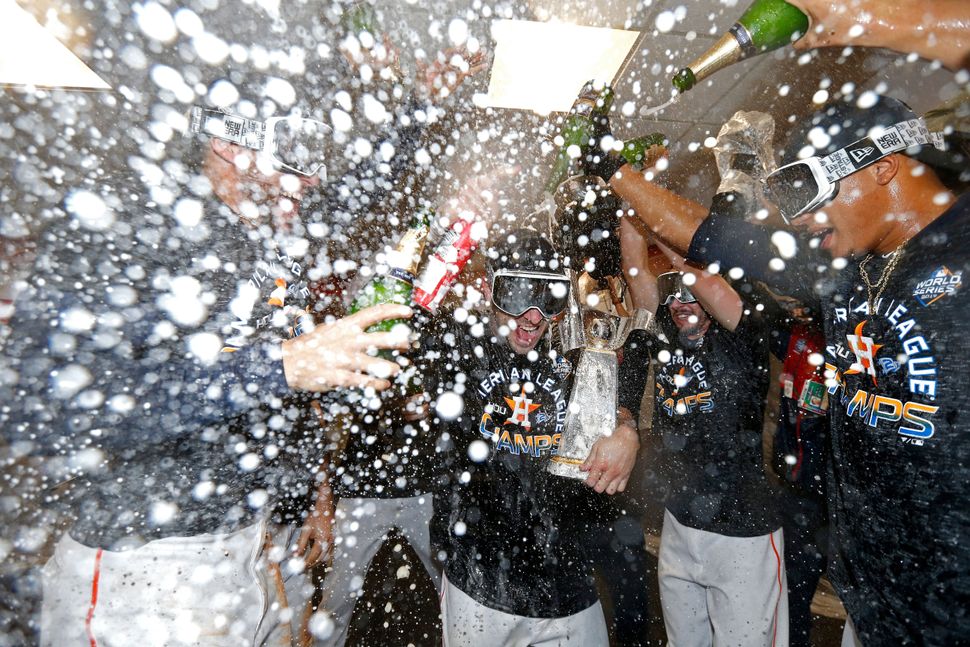 The World Series is baseball’s promised land, and for the second time in the last three seasons, it will include the sport’s best Jewish player, Houston’s Alex Bregman.

Actually, that doesn’t tell the entire story, because the 25-year-old third baseman has also become one of the best players in the game, Jewish or otherwise. And his return to the Series didn’t require any miracles, just a nice dramatic moment late Saturday night when his diminutive teammate, Jose Altuve, slugged a two-out, tiebreaking home run in the bottom of the ninth inning to oust the New York Yankees from the American League Championship Series.

Now Bregman (who isn’t that tall, either), Altuve and an assortment of other really talented Astros players will try to match the championship the team won in 2017, when Bregman was a rookie. Standing in their way will be the Washington Nationals, who represent a city that has not participated in a World Series since 1933 and has not won one since 1924.

Back then, the Senators were Washington’s team. They went on to desert the city not once, but twice, and in 2005 the Nationals came along to fill the void. And in recent years, the Nationals became a very good club that developed an agonizing inability to get past the first round of the postseason.

But now they have, in upstart fashion as a wild-card team, and their chance to give city of Washington its first title in 95 years makes them the strong sentimental favorites in this Series. The Nationals are, after all, trying to conquer the same kind of championship curse that long afflicted the Boston Red Sox and Chicago Cubs. Plenty of people will be pulling for them, including, in all likelihood, a good number of Jewish fans who would otherwise be happy to cheer on Bregman.

Meanwhile, Bregman and the rest of the Astros will be the actual favorites on the field, having notched 107 victories in the 2019 regular season, compared to the Nationals’ 93.

And Bregman, himself, will have a chance to enhance his World Series portfolio. If he so desires, he even can take inspiration from the impressive Series numbers compiled by baseball’s two greatest Jewish players — Hank Greenberg and Sandy Koufax.

Greenberg, who was born in New York City on New Year’s Day in 1911 and who was Hyman before he became Hank, established himself as a right-handed slugger for the Detroit Tigers in the 1930’s and 40’s. In all, he played in four World Series, the first one coming in 1934, shortly after he declined to play on Yom Kippur in the final stages of the regular season, and the last one occurring in 1945, just months after he returned from active duty in World War II.

The Tigers won three of those four Series, and Greenberg was a major contributor. Overall, he hit .318 in 23 World Series games, with 5 home runs and 22 runs batted in. Those numbers might have been ever more impressive had Greenberg not missed all but two games of the 1935 Series after injuring his wrist in a collision at home plate.

Like Greenberg, Koufax played in four World Series, and, like Greenberg, he was on the winning team three times, all as a member of the Los Angeles Dodgers. His first World Series came in 1959, when he was just 23 years old and was not yet the fearsome pitcher that he would become.

But by 1963, he had become the boldfaced version of himself, using just two pitches — a fastball and curveball — to overwhelm almost every hitter he faced. In the World Series that year, he struck out 15 Yankees in a 5-2 victory in Game 1, pitching all nine innings in an atmosphere made all the more intense by the fact the Dodgers were back in the Bronx for the first time since bolting from Brooklyn six years earlier. The Dodgers also won Games 2 and 3 and Koufax then went back to the mound, in Los Angeles, and finished off the Series sweep, winning, 2-1, and again pitching a complete game.

Two years later, Koufax had the most famous moments of his career, sitting out Game 1 of the Series because it fell on Yom Kippur, then rallying the Dodgers past the Minnesota Twins by pitching a shutout in Game 5 and then, on just two days of rest, another shutout in Game 7.

The following year, which would turn out to be Koufax’s last in the major leagues, he lost Game 2 of the Series to the Baltimore Orioles, pitching six innings and surrendering four runs, although only one of them was earned. He did not get a second chance because this time it was the Dodgers who were swept in four games.

And a month later, Koufax retired. He was just 30 years old but his left arm, brutalized by a pitching workload that would be unthinkable by today’s standards, was beyond redemption. His final World Series numbers: 8 games, 57 innings, 61 strikeouts and an astounding 0.95 earned run average.

Back to Bregman who, like the mighty Greenberg, bats from the right side. In 2017, he hit just .233 in the World Series, but he did have two home runs and he also had the winning hit in a wild, 13-12, 10-inning victory over the Dodgers in Game 5. In the 2019 postseason, he had a strong performance in the first round, hitting .353 as the Astros edged out the Tampa Bay Rays. Against the Yankees in the A.L.C.S., Bregman hit just .167 across six games. But he also walked seven times, more than any other player in either of the two championship series, and his on-base percentage of .423 was topped only by Washington’s Anthony Rendon (.529) and Altuve (.444).

Now comes his second World Series, starting Tuesday, with as many as seven games across nine nights. If Bregman does really well — and his overall ability and flair makes him fun to watch — it will be a little bit like Hanukah in October. Except, of course, for all those Jewish fans rooting for the Nationals.

Who To Root For In The World Series — The Jewish Star Or The Underdog?