In Asia, A Mania For Kafka 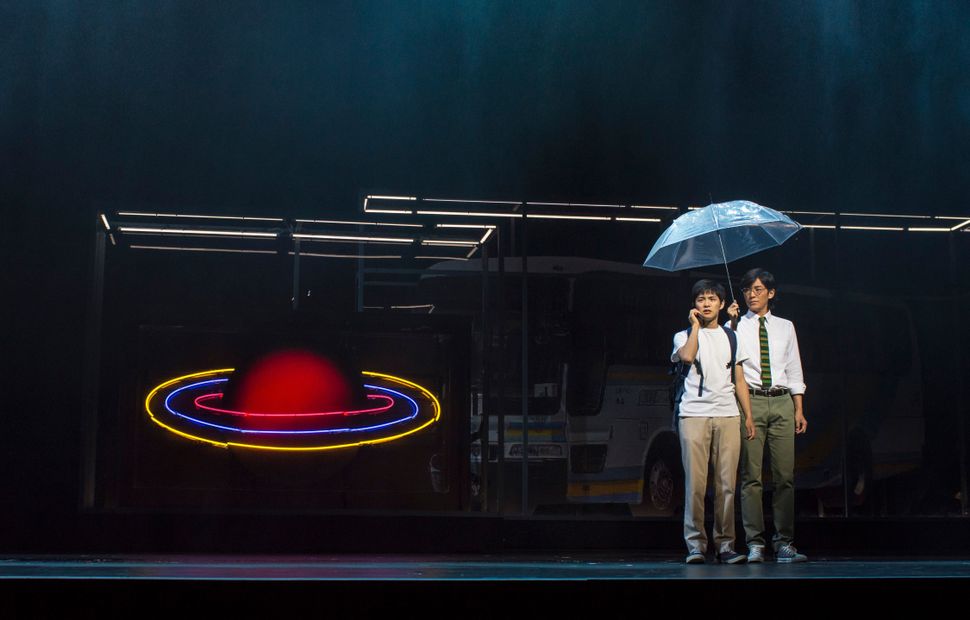 Kafka on the Shore: A still from the 2015 production. Image by Getty Images

On October 26, an “Unfolding Kafka Festival” featuring art installations, dance performances and film screenings, will open in Bangkok and Chiang Mai, Thailand. It is the third such biennial festival organized and directed by the Thai choreographer Jitti Chompee, marking a further advance of the Prague-born Jewish writer in Asia. Among its offerings is a virtual reality headset which visitors can put on to experience what Gregor Samsa, the protagonist of Kafka’s story “Metamorphosis,” might have seen and heard when he turned into a giant insect.

Westerners may see Kafka as a neurotic afflicted by insomnia, anorexia, and indecision, or what a character in Isaac Bashevis Singer’s story “A Friend of Kafka” described as “Homo sapiens in his highest degree of self-torture.” Yet in recent years across Asia, Kafka has acquired unprecedented celebrity. In Vietnam and Myanmar, devotees have welcomed Kafka festivals, sponsored by local Czech and German cultural institutions. In Japan, the bestselling novelist Haruki Murakami’s “Kafka on the Shore” 2002) won acclaim, while the UK’s 2016 Man Booker Prize was awarded to Han Kang, a South Korean described as Korea’s Kafka, for a novel about a woman who wants to transform into a tree. Five years ago, the Chinese satirist Yan Lianke was awarded the Franz Kafka Prize, cosponsored by the Franz Kafka Society and the city of Prague. Recently, Jitti Chompee took time to discuss with The Forward’s Benjamin Ivry about how and why Kafka has won such popularity in the East.

The Forward: In this year’s Unfolding Kafka Festival, the French Jewish circus juggler Nathan Israël will perform a solo work, “Man of Mud,” evoking a monstrous or abnormal individual. In “Franz Kafka: The Office Writings” (2008) the author’s professional career at the Worker’s Accident Insurance Institute for the Kingdom of Bohemia is described as “Kafka digs deeper and deeper into the mud of Austrian insurance bureaucracy.” Is it possible to see Nathan Israël’s mud as a form of entrapment, such as office workers experience, the kind of bureaucracy that Kafka made specifically Asian in his story “The Great Wall of China”?

Jitti Chompee: Not really, because I decided to invite the Man of Mud because the theme of this year’s festival is Kafka Zoo, with performances related to animals. So I thought that a kind of circus theme might be interesting for local audiences.

This year, the Japanese video artist Atsuko Nakamura presents a video installation inspired by afterthoughts on killing ants in her house. In the 2015 festival, a Thai technological school origami club produced an installation of paper beetles, recalling Kafka’s “Metamorphosis.” Is the sustained interest in insects partly due to the fact that in tropical countries, insects are present all year round?

[In 2015,] I had read Kafka’s story “A Report to an Academy” and his “Letter to His Father,” and these inspired the idea to use origami. In the “Letter to his Father,” Kafka expressed a lot of conflict with his father, but he was also inspired to write by his father. To reflect these two sides of his life, the origami insects flew in the air and absorbed the fluorescent light, and then we turned off the lights, and the insects all were shining. This year Atsuko Nakumura also created an art installation made of piles of wood to accompany her video. And the wood installation is a rigid object and the sculpture is really big. It reminded us of Kafka’s father.

Since Thai students are mostly taught about Asian, rather than European, history, they often lack information about the Holocaust. Since Kafka’s sisters Elli, Valli, and Ottla were murdered by the Nazis, will the Unfolding Kafka Festival sensitize Thai audiences about the history of the Jews during World War II?

Right. I take what you are mentioning as a good idea for the future. This year I was only focusing on giving people more opportunities to see performing arts.

Irene Eber (1929-2019) of the Hebrew University of Jerusalem, a Holocaust survivor and expert on Chinese and Jewish cultural interactions, noted that in translations of Kafka’s novel “The Castle” a critique of western Judaism was transposed into something Chinese readers would empathize with more directly. Is it possible for Asian spectators or readers to experience Kafka without interpretive filters? Is exact faithfulness possible?

Yes, we can be faithful. Two years ago at the festival, we showed twelve films, all of which we know that Kafka saw. One of the films was called “Daddy Long Legs,” an American silent movie starring Mary Pickford. After you see the movie, you think, ah, this is “Metamorphosis.”

One critic has suggested that the name of Gregor Samsa is associated with the Buddhist concept of Samsara, or cyclic change, which Kafka likely read about in the works of the German philosopher Arthur Schopenhauer. And Kafka’s short story “In the Penal Colony” reflects Hindu and Buddhist philosophy, with death and rebirth as part of an infinite wheel of suffering. Do you see Kafka as a writer influenced by Buddhism?

Not really. But maybe, well, it’s hard to say. My opinion is that Kafka had problems not only with his father, but also with religion.

In China, Kafka is a media star, referred to in all the arts as well as retail products. Five years ago, a Kafka text about free will was included in an essay question for the National College Entrance Examination in Shanghai. Could Kafka ever become so central to the educational system in Thailand?

Just over 30 years ago, the Chinese author Liu Zaifu claimed that “we can say that Goethe has been replaced by Kafka in German language literature,” with a message that “God is dead, man too; the reality is absurd, man himself too. Human beings are usually vermin.” Other writers claim that Kafka and his friends would laugh when he read his stories aloud to them. Do you find Kafka amusing or tragic?

I don’t think Kafka is funny. I found Kafka sad. Because he is always talking a lot about his family and his relationship with them, and he cannot do what he would like to do. “A Report to an Academy” is about an ape brought from Africa to Europe, who decides to learn how to be human enough to be a good performer. I can see this relating to Kafka’s looking for an opportunity to be an artist, but maybe he did not have that opportunity. Then there is the story “Josephine, the Singer or the Mouse Folk,” about the relationship between an artist and her audience. Kafka always gets back to the artist or performer.

In Asia, A Mania For Kafka