What The Bible Tells Us About Quid Pro Quo 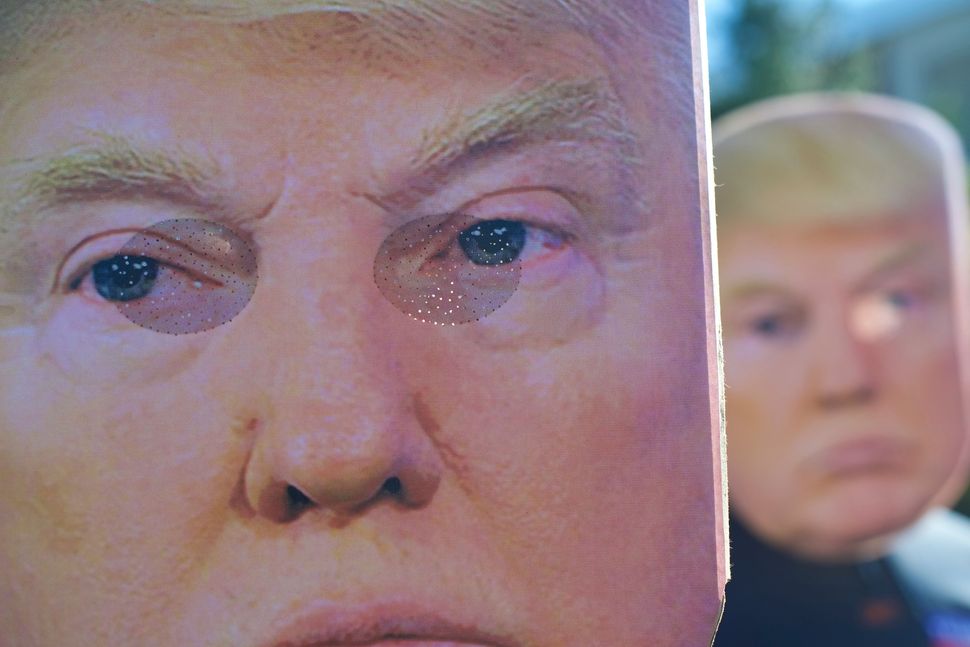 The Eyes of Trump at a Hershey, PA campaign rally. Image by Getty Images

It’s rare for Latin to make headlines, but quid pro quo, the Latin phrase meaning “thing for thing” that in 16th-century English came to mean the process of substituting one medicine for another at an apothecary, continues to blare across news reports around the world.

In case the extensive texts The New York Times published on Ukraine between various ambassadors and power-brokers don’t make it obvious enough, the real-world meaning here is “you do this and I’ll give you that.” And as Merrill Perlman smartly points out in The Columbia Journalism Review, there has long been a “shady” side to the term quid pro quo, dating back to those apothecary days.

That’s because that olde apothecary exchange wasn’t always innocent. That medicine substitution might have happened “intentionally (and sometimes fraudulently) or accidentally,” as the Merriam-Webster dictionary explains.

Let’s focus on that parenthetical “and sometimes fraudulently.”

In Hebrew, there are similar phrases meaning this for that, or frankly, “fraudulently,” no parentheses needed. And intriguingly, the body seems to be a way that fraud has been framed.

Consider the Hebrew phrase yad rochetzet yad, or one hand washes the other. Colloquial Hebrew also has shmor li v’eshmor lecha, or “you protect me and I’ll protect you.” In other words, you scratch my back and I’ll scratch yours.

In Biblical Hebrew, the body is also a source of metaphors on what might be the very antithesis of quid pro quo — justice.

The often-misunderstood Biblical phrase ayin tachat ayin, or “an eye for an eye,” comes to mind, from Leviticus 24:19-20. Here is the 1985 Jewish Publication Society translation:

If anyone maims his fellow, as he has done so shall it be done to him: fracture for fracture, eye for eye, tooth for tooth. The injury he inflicted on another shall be inflicted on him.

First things first. The rabbis make sure readers at home know “eye for eye” doesn’t mean an actual eye for an actual eye.

It’s about monetary compensation, or what the loss may have cost financially. No one is suggesting taking another person’s eye out to exact an equal punishment. In these times of increasing cruelty, of proposed alligators at the border, it seems essential to spell this out; no need to extract body parts in the name of a literal reading of Biblical text.

Here, for instance, is Avraham Ibn Ezra — who happens to be my favorite Torah commentator — quoting Sa’adya Gaon, who translated the Torah into Arabic and is one of the giants of Jewish thought, discussing whether “an eye for an eye” means exactly that. And yes, even Sa’adya Gaon — Sa’adya the Genius — mentions common sense.

“Sa‘adya Gaon has brought numerous other proofs, from simple common sense, that Scripture could not mean a fracture for a fracture literally,” Ibn Ezra writes. “For example, since the original wound was not precisely calculated, how could one duplicate it exactly? If not, and if the wound is in a sensitive area, one might kill the guilty party inadvertently! If someone removed one-third, say, of another person’s eyelid, how could one possibly give the guilty party precisely that wound?”

The discussion of monetary compensation for the wounds detailed in Leviticus occurs in the Talmud (Baba Kama 83-84) and is repeated by several Torah commentators, from Rashi to the Ramban, or Nachmanides, to yes, Ibn Ezra. As for how to calculate a monetary value for something like a tooth or an eye, Maimonides writes in the Mishna Torah, in his discussion of injuries to persons and property, that the method is to calculate the price a slave will command — with a particular body part or without.

The person who has lost a body part is then awarded the difference. But really, is money enough to compensate for something like a lost eye? What if there is no appropriate compensation?

Many of us have wondered what could possibly be a reasonable response — an appropriate compensation — for what has occurred in the U.S. since 2016. Strangely, as the quid pro quo headlines blared, and pundits discussed impeachment and punishment, I found myself also reading two writers’ takes on a missing eye and its effects. First, I re-read Denis Johnson’s iconic 1991 short story “Emergency,” which features a man coming into an Iowa emergency room with a knife stuck in his eye, and then I read “A Glass Eye,” by the Basque writer Miren Agur Meabe, and translated by Amaia Gabantxo (Parthian Books, 2018), which has a narrator who lost an eye to glaucoma.

Both are meditations on loss and reality, as well as on the strange and painful interplay between the assumed and the actual — which is what the headlines on Ukraine and Turkey, plus the eye-popping mishmash of deals-letters-betrayal-corruption feel like. What is at stake is a loss of faith in a country, in truth, in loyalty, in the Presidency, in decency, and above all, in our sense of what the world actually is.

Exhausted by the torrential rain of lies, we often cannot think of a response. We do not recognize what we see.

That’s what is moving about the centuries-long discussion of the meaning of ayin tachat ayin or an “eye for an eye”; it’s the concept that even for the most horrifying situations, there can and should be a response. There is something to be done.

This is a dangerous moment. The United States is seeing its body and soul ripped apart. We can return to the Merriam-Webster dictionary’s entry on quid pro quo and reflect on whether what is happening is happening “intentionally (and sometimes fraudulently) or accidentally.” But whether this President’s continued presence and continued damage of the country and the world is intentional, fraudulent, or accidental is merely part of the story. The other part is our response.

Quid pro quo sounds simple, a clear equation of thing for thing. But its threat is complex.

We are now faced with the glaring limits of a document that has survived the centuries — the U.S. Constitution. We are seeing the limits of its language. We too, are staring at threats to a code of justice, in this case, a code of national justice. Like the rabbis of old, arguing about the cost, meaning, and punishment for a lost eye, we are tasked with interpreting a text and thus saving it for future generations. And like the rabbis of old, we must understand that a legal code is not just words; it is a hope in the continued existence of justice, and in existence, period.

It is a way of life.

What The Bible Tells Us About Quid Pro Quo