Is It Kosher To Boo The President? 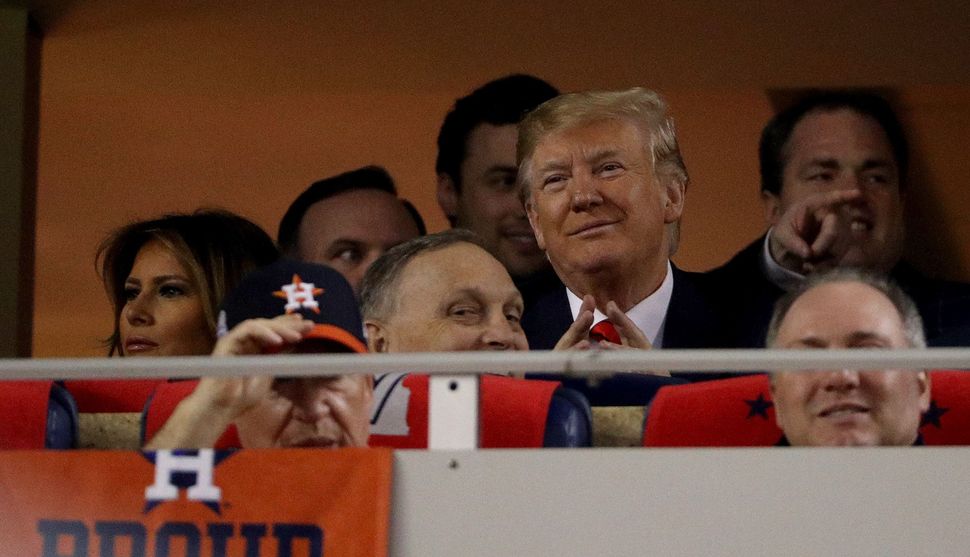 Donald Trump at Game Five of the 2019 World Series. Image by Getty/Patrick Smith/Staff

President Donald Trump had a busy Sunday. He began it with a 9 AM press conference announcing the death of ISIS leader Abu Bakr al-Baghdadi and ended the evening at Nationals Park, where he was booed by a crowd of baseball fans. Probably not how he thought the day would go.

The jeering — courtesy of many in attendance for Game Five of the Nationals-Astros World Series — was welcomed by some and denounced by others as a show of disrespect.

A Jewish gloss on this event may, depending on the reader, return either a rebuke of the action or an endorsement.

Many Jewish siddurs contain prayers for secular governments and their leaders. The Jewish prayer for the U.S. government has the line, “May the President, the Vice President and all the constituted officers of the government be blessed, guarded, protected, helped, exalted, magnified and raised.”

This, itself, shows a deference at odds with booing and consistent with respect. But, it should also be noted that such prayers also existed in Tsarist Russia for the health of a monarch who actively instigated pogroms.

Speaking more directly on the matter of loudly objecting or keeping one’s peace, the Orchot Tzaddikim, a 15th century book on Jewish ethics, sings the virtues of silence, but also makes the case for speaking up to correct someone they believe is disrespecting the Torah.

“There are times when silence can be evil,” the book states. “With respect to words of the Torah, if a person sees that the fools are scorning the words of the wise, he should answer in order to turn them back from their errors so that they do not imagine themselves wise in their eyes.”

However, the writing also cautions that, “One should be very careful not to shame any man, and not to cause any man anguish by his words.”

But this tract — which goes on to enumerate the five types of scoffing — appears mainly to be concerned with those who disrespect the Torah, and with disrespecting those who are poor or who have physical defects. It has less to say about extremely wealthy people in positions of extreme power.

The better view may be that America is a country built on dissent, which protects protests and that the act of booing is an exercise in free democracy. And even and especially as the current administration veers more towards a theocracy, we should perhaps cordon off the machinations of the government and of the pieties of faith. Our law is not Torah, but the constitution and, as mentioned above, it is advisable to correct someone who takes to “scorning the words.”

Judaism, for its part, has a strong tradition of booing. The Megillah story speaks of Mordechai’s refusal to bow to Haman, a viceroy of the king of Persia. Deference for an official is flouted, as it runs against the God-ordered moratorium on idols.

Every year on Purim we celebrate Esther’s story, reading from her scroll and booing all mentions of Haman’s name.

Of course, Donald Trump is not Haman — that is to say, genocidal — but this story and others like it (i.e. the Maccabees revolt from the Seleucids) speak to a larger pattern of defiance that appears to give this sort of mild reproach a green light. In more modern times, Jews like Abbie Hoffman and his Yippies engaged in disrespectful actions far less mild than jeers at a ball game, like hanging a marijuana leaf flag from the Nixon White House gate and propping up a pig as a prospective presidential candidate. On either side of Hoffman’s history, many Jews have booed, marched and protested against presidents and their policies. Many of those at the barricades were rabbis.

Chanting “Lock him up,” however may be a more contentious matter, as it appears to neglect due process — something Halakhic law very takes seriously.

Is It Kosher To Boo The President?