In J.D. Salinger’s Archives, Proof Of Life And Not Much Else 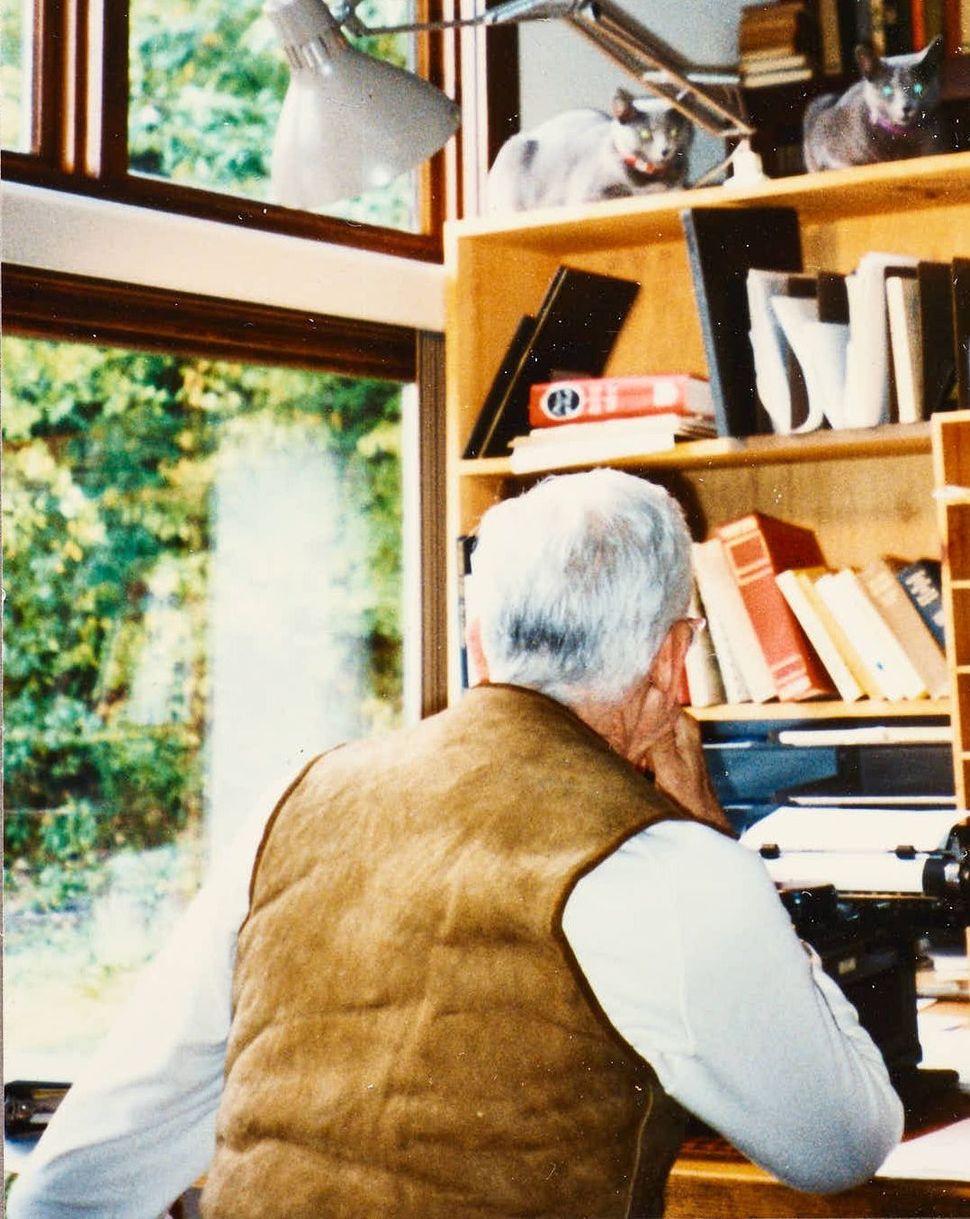 J.D. Salinger at his writing desk in Cornish, N.H. in 1993. Image by Courtesy of The New York Public Library; Astor; Lenox; and Tilden Foundations and the J.D. Salinger Literary Trust, Photographed by Robert Kato

If you visit the Mid-Manhattan branch of the New York Public Library to see a collection of items belonging to the late author J.D. Salinger, you will first have to check your phone, coat and bag. This is a fitting prelude to an exhibition on a writer for whom privacy was paramount.

“Of course, he was famously resistant to biographers, resistant to any kind of biographical inquiry,” said Declan Kiely, the exhibit’s curator. “So the notion that we would have the opportunity to exhibit his papers and artifacts seemed to me very remote to begin with.”

And yet, the exhibition, “J.D. Salinger,” presented with the cooperation of Salinger’s son, Matt, and widow, Colleen Salinger, has reached us at the end of the writer’s centennial year.

As you enter the glass double doors, stencilled with Salinger’s signature, so recognizable to readers from the jackets of his books, you will encounter an intimacy seldom allowed by the writer. It is, in fact, the same brand of intimacy — mundane, sometimes stirring, unshakably literary and irrevocably New York in sensibility (even when transplanted to Cornish, New Hampshire) — that animated his best work.

“We wanted to really firmly locate him in New York,” Kiely said. “He came here, worked in the library, read here. This is our local author.” 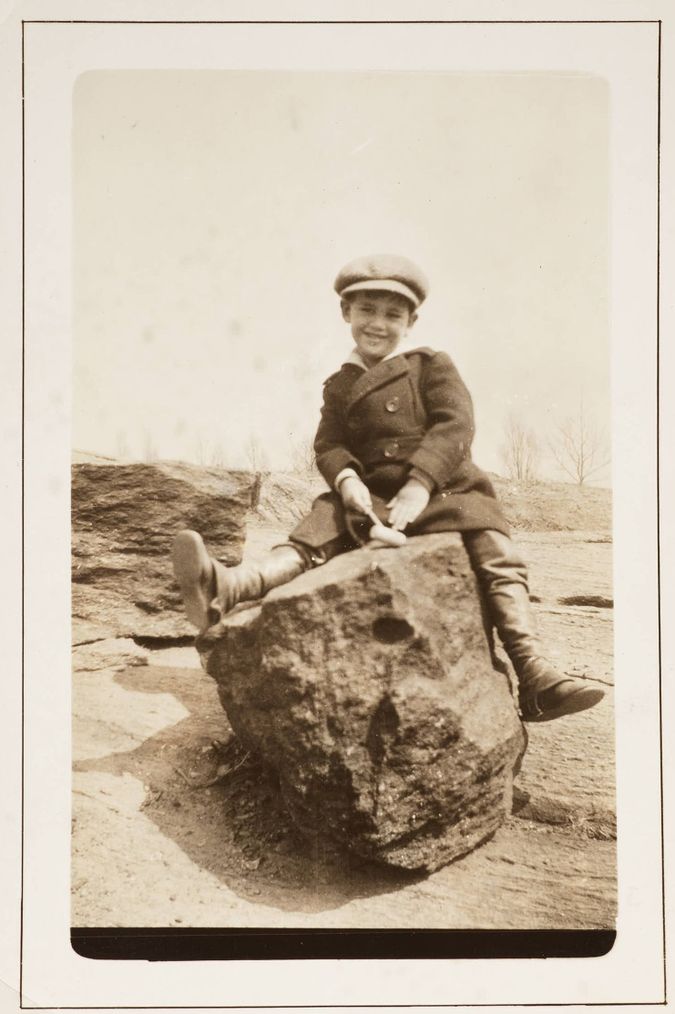 Visitors will become acquainted with a boy named Sonny, a resident of the Upper West Side, and later Park Avenue, who spent his early life among the stones, grass and pathways of Central Park. He went to camp and, after a stint at the McBurney School on West 63rd Street, was enrolled in a military academy in Valley Forge, Pennsylvania, where he was known as Jerry and dressed in the marching band-esque attire of the prior century’s artillery. Soon, he’d go to Europe, first to learn something of the family import business — we see a photograph of him on the balcony of his flat in Vienna, sharply-dressed — and later to fight in the war.

All the while, he was writing, typing away at stories in his childhood bedroom, where his mother, Miriam, issued him a cheeky offer of publication in 1937: “Check for $1000 in the mail,” she promised. He later received more heartening encouragement from Papa (Hemingway, that is) whom he met during Paris’ liberation in 1944.

“[Y]ou have a marvelous ear and you write tenderly and lovingly without writing wet,” Hemingway offered.

The war did not stall Salinger’s progress — the fruits of his time in the service were printed in Collier’s, Esquire and The Saturday Evening Post.

“The most eventful years of Salinger’s life in terms of activity was during war time,” Kiely said, adding that he chose to emphasize the author’s four years of service, “not because he dwelled on it a lot in his post-war life, but because he formed relationships in that time period that were sustained over the rest of his lifetime.” 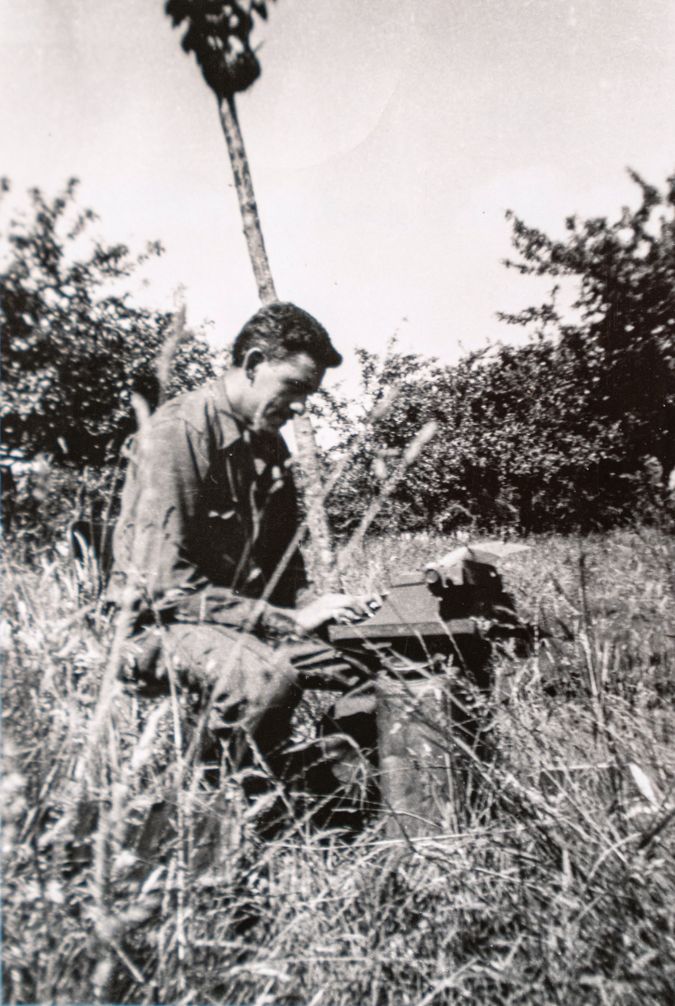 The more dramatic parts of Salinger’s biography, and the ones most frequently subject to dark speculation, are acknowledged, mainly through photos of him with his Jeep partners in Normandy or bits of ephemera – for example, his notice of receipt of application for the U.S. Army Counter Intelligence Corps. After VE Day, Salinger served in the de-Nazification process in the CIC, and had a short-lived marriage to a German woman, Sylvia Welter. He also liberated concentration camps, an experience that stayed with him — but one that, evidently, he felt was an unheroic exercise.

“True! No liberating was done.” Salinger hand wrote in a note to a 1993 New York Times letter to the editor, which referred to the “liberation” of concentration camps as an unplanned and unhurried effort by the Allies to free those they had until then overlooked. “Government ‘statesmen,’ nations, citizens, the world over just looked the other way or themselves felt completely endangered.”

Beyond this reflection, mementos of Salinger’s army days are presented in later correspondence, photographs and keepsakes like his dog tag. Kiely told me that it was Salinger’s parents who held on to the bulk of these items, and he only recovered them from their apartment after his mother’s death. Evidently, he wasn’t overly sentimental about his time in the CIC or the U.S. Army Air Force.

But a typescript of what would become “Zooey” hints that Salinger once toyed with writing more directly about his time in the war. In that revised draft, the author crossed out an opening that begins “Early in the Normandy campaign we were issued little olive-drab crystal balls to help pass the time in foxholes.” 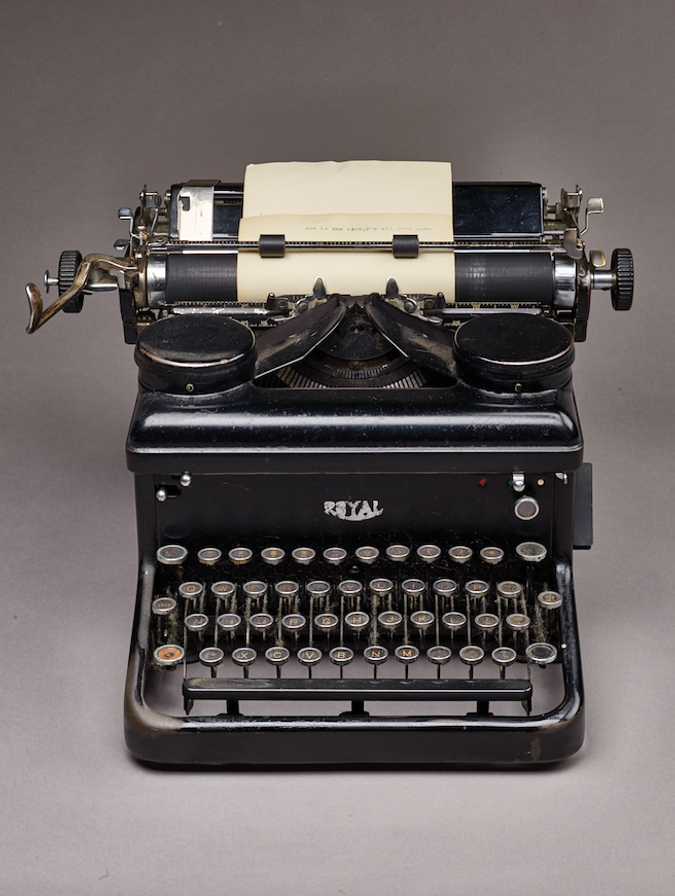 When Salinger returned to America, his life became further enmeshed with the New York literati — even after relocating to New Hampshire in the ‘50s. He begged the favor of William Shawn in his tender, and personally-revealing dedication in “Franny and Zooey” (he later ferociously defended Shawn against Tom Wolfe’s infamous takedown in The New York Herald Tribune, calling Wolfe’s work “Subcollegiate”); he invited S.J. Perelman (whose books are seen in Salinger’s spinning bookshelf) to attend the U.S. Open with him. He corresponded with that other venerable New Yorker William (Maxwell).

Those wanting the inside track on Salinger’s negotiations with publishers and his longtime literary agent, Phyllis Westberg, have much to pore over. From the beginning, it seems, the author was protective and persnickety about his work, diagramming minimalist covers and severing ties with his English publisher when they approved what he called “overly graphic, misleadingly suggestive, and disgustingly eye-catching” cover art. Looking up in the gallery, we see how Salinger lost this battle in international editions, as various foreign language copies, resting on a shelved moulding, buck his strict instructions. 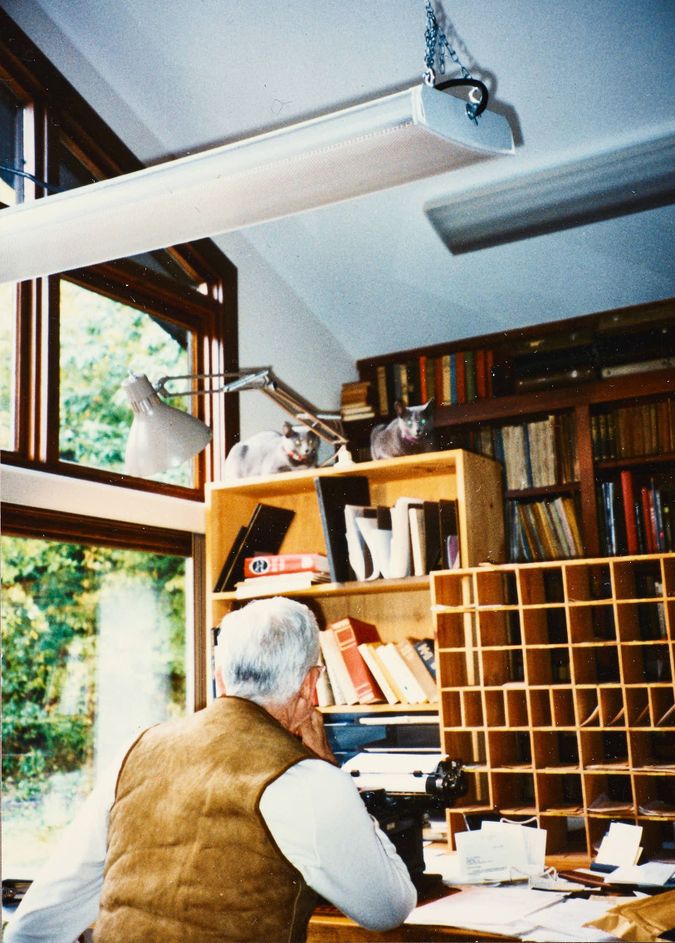 J.D. Salinger at his writing desk in Cornish, N.H. in 1993. His cats look on as he types. Image by Courtesy of The New York Public Library; Astor; Lenox; and Tilden Foundations and the J.D. Salinger Literary Trust, Photographed by Robert Kato

The other facets of Salinger’s life — the ones that were always on the other side of a privet hedge for those outside of his circle — make coy appearances. They aren’t salacious, but because the man was such a cipher to the press, any and all of the artifacts might be read that way: his “Vede Tecums,” with their gnostic notes on religious texts (his Ramakrishna affiliations are well-known); the recipe for a “Quick, good vegetable with beans meal;” VHS recordings of Marx Brothers and Hitchcock films; his pipes, glasses, pencils and photos of himself with his grandchildren, smiling, enjoying a quiet life, free from the prying eyes of an insatiable readership and media.

Here was a grandfatherly man who kept in touch with high school friends and helped them out with money. Who wrote to his son, “Math,” about his schooling, summer vacation plans and trips to Europe and later gave him and his wife birth assistance advice. In his notes as in his books, he is the kind of stylist who can compel with medicine-cabinet minutiae or the feeding regimen for his cats.

Opportunistic filmmakers and disturbed, book-toting assassins have imputed a dark and tortured soul to Salinger, but this exhibit does not present evidence that he had one. It is true that this collection was taken from samples handed over by his son and widow, and as such, is selective, but the display speaks to a simpler concern: The Greta Garbo “let aloneness” of it all. He sought no publicity, and so, he stayed away from committing the work to print. 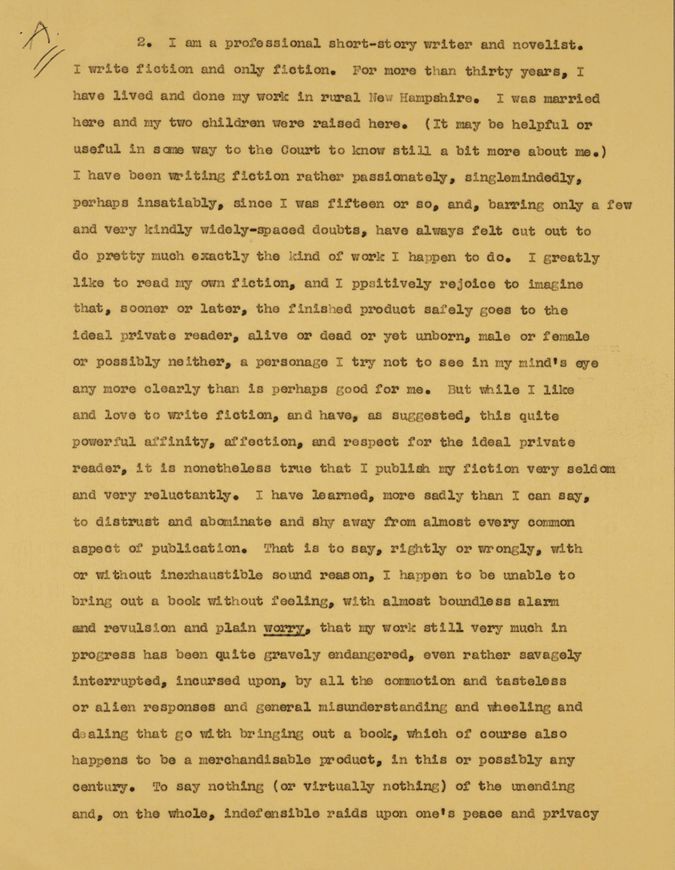 An addendum for an affidavit from August 31, 1982. “I happen to be unable to bring out a book without feeling, with almost boundless alarm and revulsion and plain worry, that my work still very much in progress has has been quite gravely endangered, even rather savagely interrupted, incursed upon, by all the commotion and tasteless or alien responses and general misunderstanding and wheeling and dealing that go with bringing out a book…” Image by Courtesy of the New York Public Library; Astor; Lenox; and Tilden Foundations and the J.D. Salinger Literary Trust, Photographed by Robert Kato

“While I like and love to write fiction,” Salinger wrote in a 1982 affidavit for a lawsuit against journalist Steven Kunes, who was accused of impersonating Salinger and fabricating an interview with him, “it is nonetheless true that I publish my fiction very seldom and very reluctantly. I have learned, more sadly than I can say, to distrust and abominate and shy away from almost every common aspect of publication.”

Visiting his personal papers, one walks away with the impression that the image of Salinger as a tormented hermit is misguided, and says more about the public than the man who shunned it. In that sense, visitors see why he might have dodged the spotlight: to get the time in the shade most of us take for granted.

And so, here’s the underwhelming truth of all the David Copperfield crap. Save for the many pages that went unpublished, J.D. Salinger does not appear to have been hiding much from us.

In J.D. Salinger’s Archives, Proof Of Life And Not Much Else