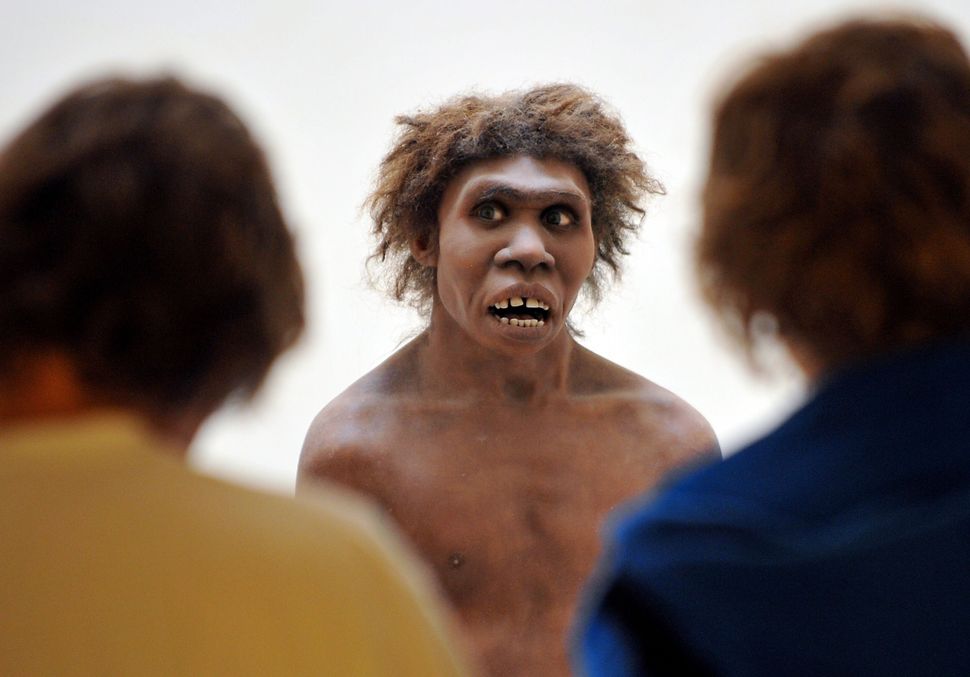 A model of a Neanderthal man. Image by Getty/PIERRE ANDRIEU/Staff

Long before the Patriarchs and Matriarchs, early men and women were living in Eretz Yisrael. Newly-unearthed relics reveal that some of these people may have traveled great distances before settling there — and that some of them weren’t 100% human.

Teeth found in the Manot Cave in Western Galilee show features of both Homo sapiens and Neanderthal chompers, Haaretz reported, and their age — up to 38,000 years old — hint at how the Stone Age’s most esteemed cave-painters may have landed in the Levant.

The presence of these teeth, studied by a team of researchers from Israel, Austria and the United States, point to a hybrid population. Neanderthals are believed to have been long extinct in the region by the time of the teeth’s dating. But, judging by the nature of tools found within the cave — resembling a European culture of craftsmanship — it appears that these human-Neanderthal mixes are descended from interbreeding that originally occurred in Europe.

Manot Cave, which was discovered in 2008 during construction work, is thought to have been a dwelling of the Aurignacian culture, a group named for the Aurignac cave in southwest France. The Aurignacians were regarded as artistic innovators of the pre-wheel era for introducing symbolism to their eponymous cave — you may recall their works “Handprints on Cave Wall” and “Herd of Cattle and Horses.” These people also fashioned tools out of antlers, which distinguish them from an endemic population, the Ahmarian, who used stone spears.

Since work began on Manot, the question as to how these cave Michelengelos arrived there has lingered.

“There is a huge discussion about how the Aurignacian culture came to the Levant, whether it spread by migration from Europe or through cultural contact,” Israel Hershkovitz, a physical anthropologist from Tel Aviv University, told Haaretz. “I think the answer is in these teeth: it was an actual influx of people.”

Micro-CT scans and 3D analysis on four of the teeth — each belonging to different individuals — found that the well-preserved enamel molars had a blend of Homo sapiens and Neanderthal features.

The look of the teeth points to a European fling, as an earlier courtship in the Levant — circa 50,000 to 60,000 years ago, when Neanderthals were still available for fire-watching and chill — would have diluted the Neanderthal markers by the time the owners of the teeth entered the picture.

“At Manot we see how humans passed through the Levant to Europe, and then came back here thousands of years later,” Hershkowitz told Haaretz. “It shows us that, when there are no borders, humans are always on the move, always looking for that next frontier. It is part of human nature.”

While these Neander-Sapiens appear to hail from Europe, the business of interbreeding may have started in what is now Israel. In 2015, the 55,000-year-old skull of a young female, found in Manot Cave showed strong signs that her forebears were Neanderthals and Homo sapiens who met and mingled one cave-lit night.