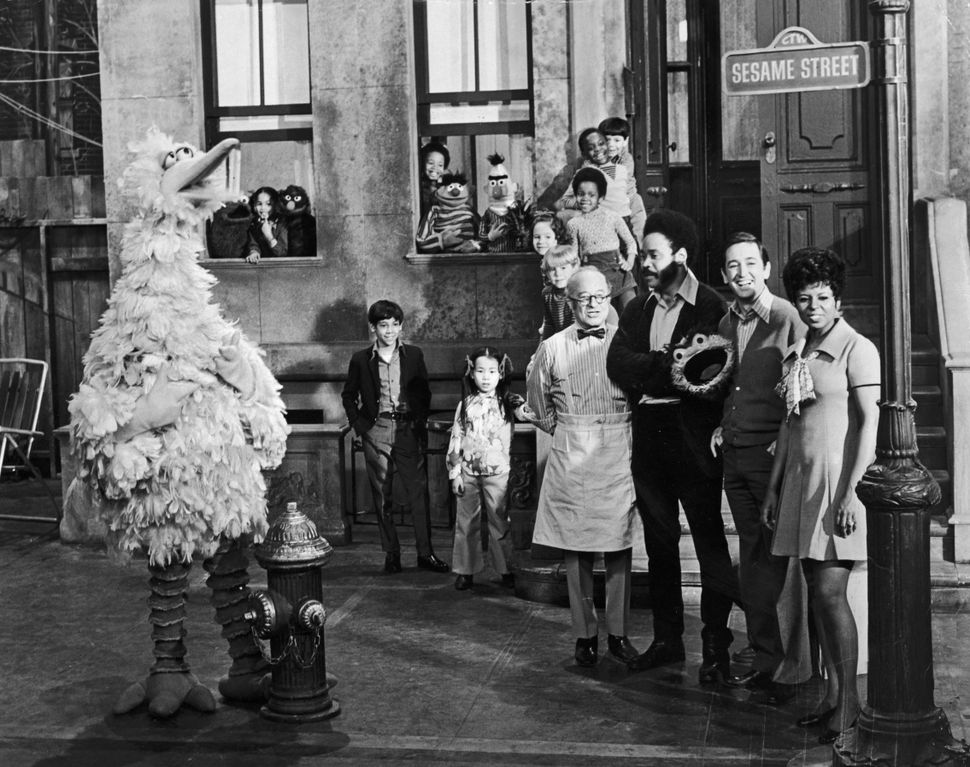 The cast of ‘Sesame Street’ in 1969. Image by Getty Images/Hulton Archive

If you want to really understand “Sesame Street,” watch any segment in which Oscar the Grouch springs out from the tin can he calls home to sing about how much he loves trash. He’s done so many times over the decades, starting in 1970 during the show’s very first season, when a gleeful Oscar — then the same shade of worn, old orange as your grandmother’s den carpet — informed a young boy, Lance, and his teacher Gordon Robinson, about the wonders of refuse. “Just looking at this trash makes me feel so good,” Oscar proclaimed, “I feel like singing.” Then came the lyrics that have defined a character who on any other show might be described as unlikely, but on “Sesame Street” make an almost alarming amount of sense: “Oh, I love trash.”

It’s a sentiment designed to appeal to children, who also love trash, and to win over skeptical adults; what parent could resist the image of Oscar rapturously snuggling an old sneaker, “a gift from my mother the day I was born”? The secret, though, is that Oscar isn’t really singing about old broken stuff. He’s singing about people. And he’s singing about New York, the city in which he was born — or emerged fully-fledged from a subway exhaust pipe.

Look to the second verse of “I Love Trash,” in which Oscar cradles a smudged bit of damp newspaper. It’s 13 months old, he lets us know, “I’ve wrapped fish inside it, it’s smelly and cold.” But to him, it’s priceless. Its history is specific and telling, a callback to a classic image of immigrant New York, a time when tightly-packed Lower East Side vendors would tie up the fresh catch in the day’s Herald, or Evening Post, or Forward. Oscar’s reeking newspaper is a relic of an era of change and open-mindedness. He loves it because it’s trash — about that he is very certain, and very loud — but he’s also celebrating an everyday, unromantic story about how the people in his city live.

Here’s what Oscar teaches the viewers of “Sesame Street,” old and young, to love: “Anything dirty or dingy or dusty, anything ragged or rotten or rusty.” It’s a catchy cadence with a message, its fond look at society’s leftovers reminiscent of another great ballad of New York: Emma Lazarus’s “The New Colossus,” the poem that greeted immigrants from the base of the Statue of Liberty. “Give me your tired, your poor,” Lazarus wrote, “Your huddled masses yearning to breathe free,/The wretched refuse of your teeming shore./Send these, the homeless, tempest-tost to me.” Lazarus celebrated refuse more elegantly than Oscar, but their dreams were the same: A place where that which some might consider extraneous would be valued, cared for and understood. It’s the essential goal of “Sesame Street,” which bills itself in its opening song as a place of “friendly neighbors” where “every door will open wide.” But delivered by Oscar, perhaps the most resolutely tempest-tost creature on earth — over the years, he’s upgraded from orange to a faded moss green, but never ceased to give the impression of an extremely mildewed towel — it has an additional punch. He makes loving humanity, no matter how downtrodden, wrinkled and possibly stinky it may be, sound not moral but fun. He’s a reminder that what’s meaningful is rarely pretty, and what’s good can often be framed as distasteful.

“Sesame Street” turned 50 years old on November 10. This past May, the producer and singer Jack Antonoff appeared on the program, where he tried to convince Oscar and his peers that he, too, could be a Grouch. Grouches, Oscar informed Antonoff, “love really messy, grungy stuff.” He escorted the well-groomed, wealthy star over to a pile of trash, breaking into song once again, and the two examined the hoard with glee. Antonoff, who has in recent years become an outspoken advocate for immigrant rights, took the second verse. At the song’s end, he put his arms around his newfound Grouch friends, and asked “Am I part of the club now?” They crowded around him. He didn’t look or sound a thing like the Grouches; he wasn’t wearing the right clothing, and he was also covered in banana peels. But it didn’t matter, because he was one of them.