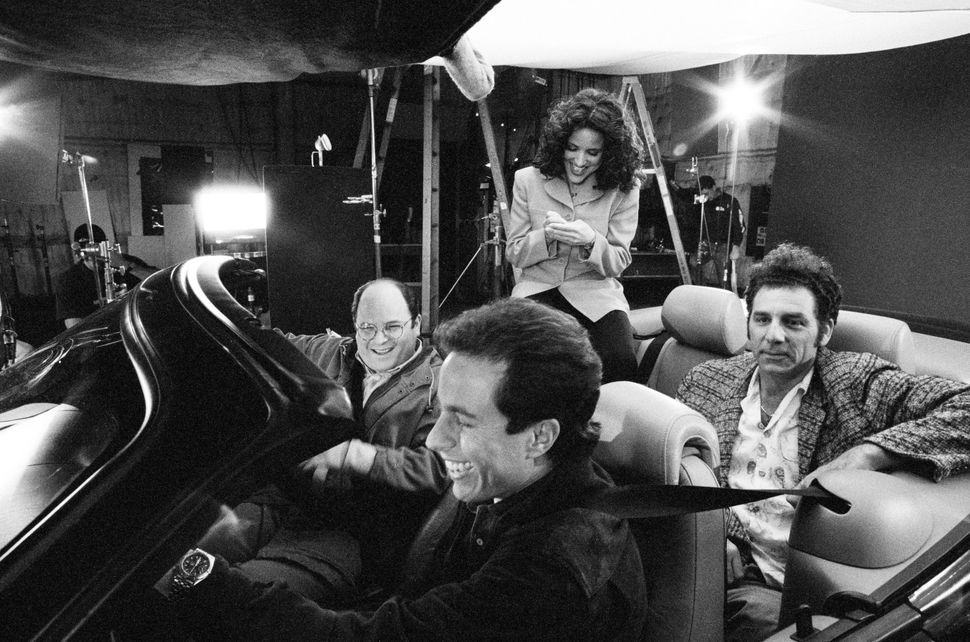 The core cast of ‘Seinfeld’ in 1998. Image by Getty/David Hume Kennerly/Contributor

When the history books are written (and some of them already have been), the record will show that it took a gentile to make “Seinfeld” a reality.

Rick Ludwin, the NBC executive who was the so-called Show About Nothing’s biggest cheerleader at the network, died Sunday of organ failure at a Los Angeles hospital, The New York Times reported. He was 71.

In 1988, Ludwin was the head of NBC’s specials and Late Night programming, in charge of “Saturday Night Live” and “The Tonight Show.” But he threw a prime time spot to Jerry Seinfeld after he and fellow executives Warren Littlefield and Brendan Tartikoff met with the young comedian to discuss his prospects in television.

The project they spoke about would become the “Seinfeld” pilot, 1989’s “The Seinfeld Chronicles.” It was not always considered a surefire hit.

According to Jennifer Armstrong’s 2016 book, “Seinfeldia: How a Show About Nothing Changed Everything,”the pilot received a tepid test screening before NBC suits.

Tartikoff, a New York Jew, wondered, according to Armstrong, “Who will want to see Jews wandering around New York acting neurotic?” To which Ludwin replied, “I’m not from New York, I’m not Jewish, and I thought it was funny.”

In the coming months, Ludwin would prove the show’s most stalwart champion.

As Armstrong wrote, Ludwin went out on a limb for the sitcom, cancelling a two-hour Bob Hope special and using its budget to fund a four-episode order of “Seinfeld.”

Yada, yada, yada; the rest is comedy history. Ludwin did have his doubts at times, particularly when it came to the first season episode “The Chinese Restaurant,” a real-time bottle episode that follows Jerry, George and Elaine as they wait for a table at a Chinese joint, with subplots including Jerry prodding Elaine to snag an eggroll from a seated party’s table.

But according to Armstrong’s book, Ludwin ultimately told co-creator Larry David, who wrote the episode, “If you feel passionate about this, which you obviously do, go do it, and we’ll hope for the best.”

The episode became a classic of the series, helping establish many of its hallmark mundane and petty concerns. (It’s the episode that gave us George’s famous cri de couer, “You know we’re living in a society!”)

“He was kind and thoughtful in an arena where that can be rare,” Mulaney wrote. “He never bragged that he paid for the ‘Seinfeld’ pilot from his Late Night budget when NBC wouldn’t, thus saving the project. But he did that.”

Rick Ludwin died. He was the head of NBC’s Late Night division for many years. He was kind and thoughtful in an arena where that can be rare. From the day I began at SNL he would email me any time he liked a sketch I had worked on. He loved television. LOVED it.

Ludwin was also a great curator of “Seinfeld” history, donating many artifacts from the show to his alma mater, Miami University in Oxford, Ohio.

“He famously fought single-handedly to keep a struggling little show on the air called ‘Seinfeld,’” O’Brien said, before remembering how Ludwin championed his own rocky start on “Late Night.”

“Pretty much everyone at the network thought I should be cancelled,” O’Brien said. “But one executive disagreed, and that was Rick Ludwin.”