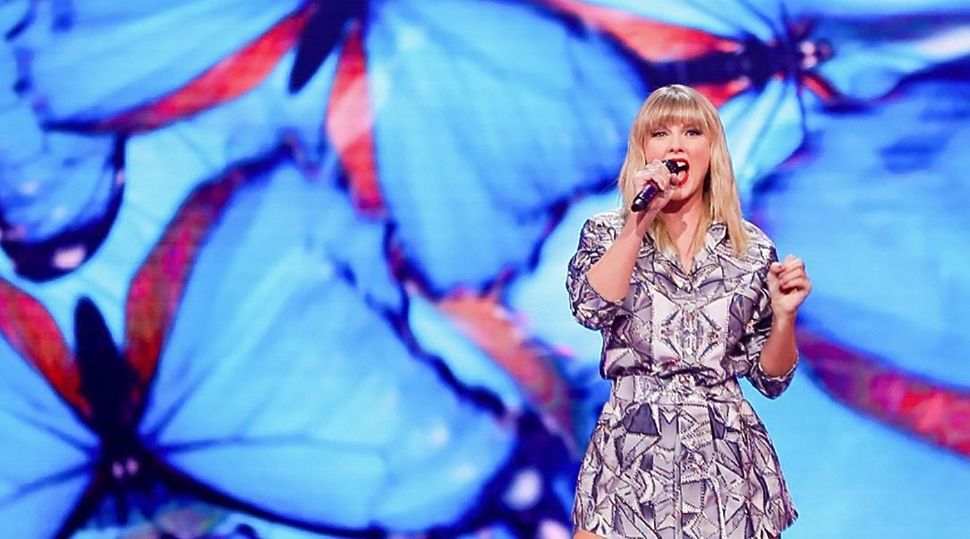 This is not a “Love Story.”

Taylor Swift has alleged that her former label manager Scott Borchetta and his business partner Scooter Braun are keeping her from what would be a career high. Their company has denied the charges and entered the fray with allegations of their own. But this whole thing keeps getting wilder, leaving a “Blank Space” for the ultimate outcome.

In lengthy Instagram, Facebook, Tumblr and Twitter posts Thursday evening, Swift accused Braun and Borchetta’s label, Big Machine Records, of issuing conditions on the use of her back catalog. Big Machine owns Swift’s master recordings for her first six albums. This fact led to Bad Blood in July, when Borchetta sold the label to Braun, a manager whom Swift accused of bullying her. Swift alleges that the duo are attempting to prevent her from performing her old hits at an upcoming American Music Awards retrospective unless she falls in line with their demands.

“Scott Borchetta told my team that they’ll allow me to use my music only if I do these things: If I agree to not re-record copycat versions of my songs next year (which is something I’m both legally allowed to do and looking forward to) and also told my team that I need to stop talking about him and Scooter Braun,” Swift wrote.

Many performers who don’t retain ownership of their masters perform the songs recorded on them and don’t usually require permission. But Swift says that Borchetta and Braun are making the argument that a live performance at the AMAs would constitute “re-recording” her old tracks “before I’m allowed to next year.”

Swift, who petitioned her fans to help her fight back against the alleged Big Machine demands, also announced a forthcoming Netflix documentary intended to feature old performances, which, because Borchetta and Braun’s apparent restrictions, might have an uncertain future.

Friday morning, in a statement obtained by Variety, Big Machine wrote “As Taylor Swift’s partner for over a decade, we were shocked to see her Tumblr statements yesterday based on false information. At no point did we say Taylor could not perform on the AMAs or block her Netflix special. In fact, we do not have the right to keep her from performing live anywhere.”

Then, Big Machine pulled out the big guns.

“The truth is, Taylor has admitted to contractually owing millions of dollars and multiple assets to our company, which is responsible for 120 hardworking employees who helped build her career,” the statement continued. “We started to see progress over the past two weeks and were optimistic as recently as yesterday that this may get resolved.”

Braun and Borchetta wrote that, “despite our persistent efforts to find a private and mutually satisfactory solution, Taylor made a unilateral decision last night to enlist her fanbase in a calculated manner that greatly affects the safety of our employees and their families.”

The tactic of painting Swift as a villain has met with mixed results over the years. (Kanye, Kim Kardashian and Katy Perry — until this year, when she and Swift hugged and made up while dressed as fast food — can attest to this.) But the most alarming language in Big Machine’s response steers into new territory with a whopper of gas-lighty rhetoric: “Taylor, the narrative you have created does not exist.”

Of course, the back-and-forth didn’t end there.

“The truth is, on October 28, 2019 at 5:17 p.m. the Vice President, Rights Management and Business Affairs from Big Machine Label Group sent Taylor Swift’s team the following,” reps for Swift wrote in a statement to Variety. “‘Please be advised that BMLG will not agree to issue licenses for existing recordings or waivers of its re-recording restrictions in connection with these two projects: The Netflix documentary and The Alibaba ‘Double Eleven’ event’”

This appears to support the “narrative” that Big Machine says don’t exist.

The statement went on to detail how, in the aforementioned Double Eleven event, Swift only performed music from her latest album, “Lover,” which Big Machine doesn’t own, to avoid a rights argument and that yesterday, Borchetta “flatly denied” Swift’s requests concerning Netflix and the AMAs.

“Please notice in Big Machine’s statement, they never actually deny either claim Taylor said last night in her post,” the statement from Swift’s camp said. They added that “a professional auditor has determined that Big Machine owes Taylor $7.9 million dollars of unpaid royalties over several years.”

Variety reported that they had seen a document that appeared to confirm this claim. Big Machine owns “Red,” but they may be in the red when it comes to what they owe the singer-songwriter behind it.

Updated: On November 18, TMZ reported that Swift and Big Machine had come to an agreement allowing her to perform the songs at the AMAs.

The statement named the AMAs, but not Netflix as an “approved platform.” It’s unclear what will become of that project.

Updated: Later on the afternoon of November 18, Dick Clark Productions hit People and Pitchfork with their own statement, disputing Big Machine’s account of their sign off on the “joint statement.”

“At no time did dick clark productions [sic] agree to, create, authorize or distribute a statement in partnership with Big Machine Label Group regarding Taylor Swift’s performance at the 2019 American Music Awards,” the statement read. “Any final agreement on this matter needs to be made directly with Taylor Swift’s management team. We have no further comment.”