In Impeachment Hearings, The Dignity Of Details 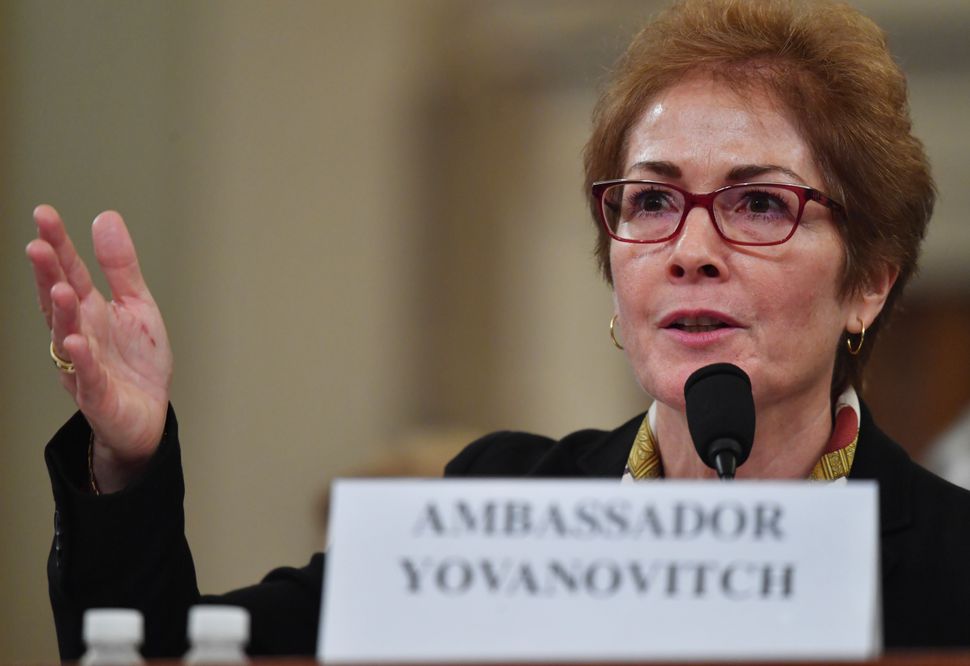 On Friday, instead of cleaning for Shabbat, I found myself riveted and completely spellbound by the testimony of Ambassador Marie Yovanovitch. But something else struck me — the raw power of the question as a form. The idea, old as the Greeks and deeply present in the Talmud, that question followed by question can lead us to truth.

I was sure everyone else was riveted too, but I knew that wasn’t the case. The day before, a major news organization had tweeted that the hearings lacked the pizzazz to hold viewers’ attention:

What is pizzazz, you ask?

According to Merriam-Webster pizzazz is: “the quality of being exciting or attractive: such as a) glamour and b) vitality.

Maybe pizzazz — as well as “glamour” and “vitality” — is being redefined in our era as unseemly behavior, like a President tweeting insults about a witness in real time, while a witness is testifying. That’s news, that’s well, pizzazz, but a diplomat detailing double-dealing by a president’s personal lawyer is not.

As I watched, I kept tabs on the live commentary by reporters from The New York Times. I noted White House correspondent Maggie Haberman describing a moment in the proceedings as “dry”:

“This line of questioning is pretty dry so far. And just as the Republicans did on Wednesday, the tactic has slowed down a sense of drama around Yovanovitch’s testimony.”

Perhaps, in our era, question after question has become “dry.” That description isn’t far from lacking “pizzazz.”

Then, when I tried to obtain comments for a piece on the hearings, most people I contacted told me they weren’t watching. First, I was dismayed by the lack of attention, and then I stepped back and realized I had to ask:

Why was I so riveted?

To be fair, plenty of people I had not contacted were watching, as Twitter informed me. And the people who were riveted, along with me, kept using the word “dignity,” which is perhaps the new linguistic opposite to “pizzazz.”

For instance, Jeremy Dauber, a scholar of Yiddish literature, tweeted about the “dignity, power, and patriotism” of the Ambassador: That same word – “dignity” – was used by The Washington Post’s Jennifer Rubin, a conservative blogger.

I agree on the dignity, but I also think the hearings provided two main elements: questions and details. Our political moment has been short on both. We hear constant pronouncements, some true, and many false; but fewer questions. For example, we hear “health care is a right” and not “how can a country as large as the U.S. design a health-care system to protect all Americans?” That question might be followed by other questions:

There is a difference in a statement versus of serious questions. And that was the difference I was hearing.

Then, in a phone conversation with a scholar about the hearings, I was introduced to another theory. Perhaps what was riveting was not questions—as I had originally thought—but details. This tiny moment in a conversation; that exact weapon and how much it cost. This amount of aid and how long it was held up for.

Sure, anyone with a strong Jewish education is immersed in the question form; Biblical commentators like Rashi, for instance, build their commentary on making the reader identify the question at hand. And of course, anyone with a college education should have some familiarity with questions as a method of inquiry — with Socrates, for instance. And Friday’s line of questioning was clearly intended to identify specific instances with legal consequences — or “impeachable” conduct.

But anyone who has spent time in yeshiva has spent plenty of time with details. So maybe it was the details that keep me watching. And I confess: details don’t bore me. They thrill me.

Halacha — Jewish law — is about detail. Sometimes too much detail. And those who love Jewish text learn to delve into these details and delight in them, to consider detail pizzazz. To find “vitality” in the tiny points.

Maybe that’s the problem with our current political culture. A disdain not only for the truth — that suddenly amorphous thing — but for details. For a fleshing-out of the particulars. For what education is supposed to teach all of us, along with how to question: a backing-up of your points.

We should all be worried about the rise of generalities, and the emphasis on pizzazz over substance. In a world of generalities, question after question seems unnecessary, perhaps dry. It’s the kind of thing you can skip watching. But this stuff is dangerous, because lack of detail can lead us to support candidates who support no one but themselves.

Lack of detail is often a sign of a lie, in the worst case, and not knowing what you’re talking about, in the best case. And if the past few years have taught us anything, lying by a public figure is a major concern. So too is incompetence.

That’s why some of the testimony has felt redemptive. I realize, listening, that I still believe in questions as a path to truth, and as a way to uncover lies; I still thought details mattered, despite the propaganda campaign we have all witnessed against details. Against specifics. Against facts. Against expertise, like what career diplomats have displayed.

That’s why the Ambassador received a standing ovation; because by her answering question after question, offering detail after detail, she showed that there is dignity in detail, and there is truth.

Detail isn’t dry, and it isn’t a waste of America’s time or money; it’s democracy at work.

And if a standing ovation isn’t a touch of pizzazz — if that rare reaction to testimony in the House of Representatives isn’t a form of vitality and even glamour — I’m not sure what is.

In Impeachment Hearings, The Dignity Of Details