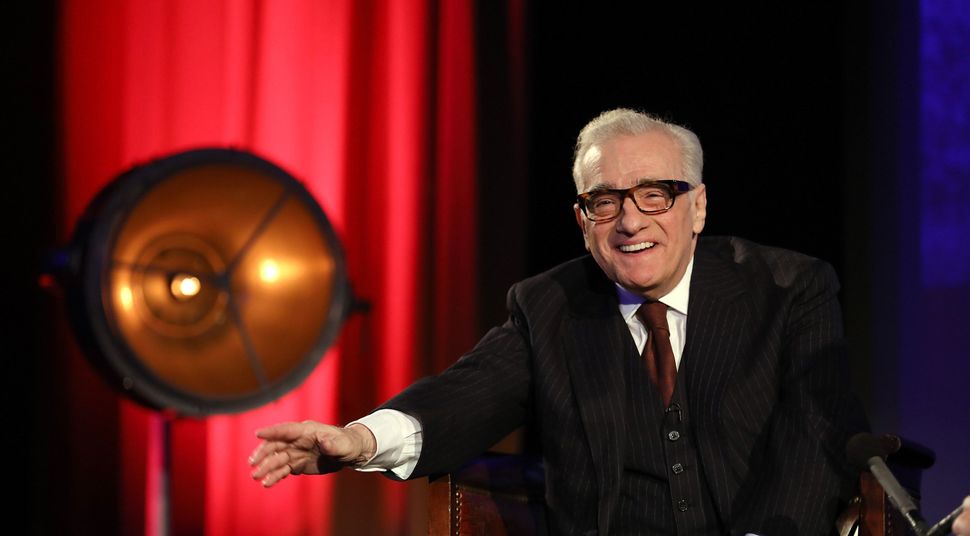 Martin Scorsese, the Little Italy-raised, second-generation son of Italian-American garment workers, was born into the piping-hot melting pot he spent a lifetime committing to film. His awareness of America, while observed from a particular — often extralegal — vantage point, is supreme even among his impressive cohort of auteurs: Spielberg, Coppola and De Palma. Naturally, he gets the Jews.

While the chosen people are not often the focus of the Roman Catholic director’s oeuvre, when they are, Scorsese strikes at something essential to the Jewish experience in all its messiness, color and variety. That Jews are like everyone else, only more so, is a truth Scorsese understands with acuity. Here are just some of the ways the director has shown this understanding during his over 50-year life in pictures.

Like the best of his work, Scorsese’s three-and-a-half-hour-long homage and elegy to the decades-spanning gangster picture, presents a cross-section of American life — this time through the mobbed-up politics of the Teamsters union.

Among the film’s expansive cast of characters are “Irishman” Frank Sheeran (Robert De Niro), a trucker and hit man; German-Irish American Teamster labor leader Jimmy Hoffa (Al Pacino) and a host of Italian American mobsters headed by Russell Bufalino (Joe Pesci). On the margins is Allen Dorfman (Jake Hoffman), a Jewish insurance agent from Chicago placed in charge of the Teamsters pension funds. Dorfman’s grisly end — he was shot dead in January 1983 in the icy parking lot of a Lincolnwood, IL hotel restaurant — is exposited in a subtitle when he first appears on screen.

We don’t witness that specific demise in “The Irishman,” but we do see it in “Casino,” in the character of Andy Stone, a fictional version of Dorfman, who finances main character Sam “Ace” Rothstein’s Tangiers Casino through the Teamsters’ pensions.

“As much as they liked him, I mean, he wasn’t one of us,” wise guy Nicky Santoro (Joe Pesci) says, explaining Andy Stone’s death in a voiceover. “He wasn’t Italian. As far as they knew, he could have talked. Otherwise, Stony might still be alive.”

This blithely related prejudice is one of the central motifs of “Casino,” whose main character of Rothstein (based on real-life genius handicapper and casino operator Frank Rosenthal) is distrusted, maligned and made the odd man out because of his background.

While more circumspect than his Italian counterparts, Rothstein is regularly accused of having gotten a big head for trying to run his business meticulously and resisting the disruptive influence of murders occurring in its orbit. A man for details, he insists on having a uniform number of blueberries in muffins from the casino’s kitchen and runs afoul of a local politician for ousting the man’s brother-in-law as slot manager for doing a sloppy job.

“Mr Rothstein, your people never will understand the way it works out here,” the Clark County commissioner Pat Webb (L.Q. Jones) tells Ace after the firing. “You’re all just our guests. But you act like you’re at home. Let me tell you somethin’, partner… you ain’t home. But that’s where we’re gonna send you if it harelips the governor.”

This line might not smack of overt anti-Semitism, but later, when an out-of-context quote in an article exposes Rothstein as running the casino without a license, Webb says “we may have to kick a kike’s ass out of town.”

Even Ace’s closest friends (and his drug-addicted wife played by Sharon Stone) have no qualms referring to him as a — pick your expletive — Jew to his face when he fails to fall in line with their expectations or makes himself visible with his array of mustard, pomegranate and Pepto-Bismol-pink suits on his ill-advised variety show. In that way, “Casino” is a story of the myth of assimilation.

For Ace, for casino manager Billy Sherbert (Don Rickles) and for CEO of the Algiers Philip Green (Kevin Pollak), it’s understood that they’re only where they are because other hands put them there, They’re not to forget it, and they’re first on the chopping block when plans go sideways — even through no fault of their own.

In this world, the minute the Jew has a mind of his own or stops being useful, the quickest way to cut him down to size is to call him a Jew — sometimes, as in the case of poor Billy Sherbert, during an assault by telephone receiver.

Karen Friedman (Lorraine Bracco), a well-heeled Jewish girl from Lawrence, NY, marries Irish-Italian mobster Henry Hill (Ray Liotta) in a Jewish ceremony, and tells her mom that he’s half-Jewish. The ruse falls apart soon enough, when Henry, then living with Karen and her parents, stays out to all hours with his friends in the Cosa Nostra.

“What kind of people are these?” Karen’s mom (Suzanne Shepherd) asks her. “Did you know how these people live? Did you know what they were like? Your father never stayed out all night without calling.”

The movie takes this as a hallmark of a Jewish husband. Later, when wig store proprietor Morrie Kessler (Chuck Low) is whacked, his wife knows something’s wrong when he doesn’t come home, telling Henry “In 27 years he’s never been out all night without calling.”

Karen falls for the lifestyle Henry can give her, but is shocked by her fellow mob wives — the way they dress (“lots of pantsuits and double knits”) and do their makeup, how they beat their kids with broom handles and spit on their own floors when the cops come by with subpoenas and search warrants.

But, she soon acclimates well. After a time-passing montage, a camera pan shows the contents of her closet, now filled with spangly numbers in various shades of pink. With time, she becomes an accessory to her husband’s drug running.

As a domestic drama, “Goodfellas” is a parable about marrying poorly. A conservative case could be made that the film shows the hazards of intermarriage — particularly when you marry into a crime family. (As an epilogue tells us, Karen and Henry divorced.)

Jordan Belfort is a middle-class kid from Bayside, Queens who recruits his neighborhood pals — a motley Jew crew marked by academic failure — to start a successful and shifty investment firm built off a portfolio of rinky-dink companies.

Belfort calls the company Stratton Oakmont because it is “A firm whose roots are so deeply embedded into Wall Street that our very founders sailed over on the Mayflower and chiseled the name Stratton Oakmont right into Plymouth fucking Rock!” (The firm is established in 1989.) His is a dream, then, of WASPhood, or at least WASP status.

Belfort may not realize it — though he observes that Donnie Azoff (Jonah Hill) wears horn-rims with clear lenses “just to look more WASP-y” — but what he’s aiming for, after losing work at L.F. Rothschild, is a WASP-y reinvention inspired by his early encounter with chest-thumping power broker Mark Hanna (Mathew McConaughey). Belfort swaps his brunette wife for a blonde one, buys a yacht, enjoys country club memberships — the Jew-made-good starter pack.

But his is an anxiety shared with other Jewish characters in the film. Even “Quaalude King of Bayside,” Brad (Jon Bernthal), who proudly wears a chai necklace, only seems to display it while lifting weights and showing off his pecs and biceps so you know not to mess with him. Jordan’s quick-tempered accountant dad “Mad” Max (Rob Reiner), couldn’t hide his Jewishness if he tried, but for some reason he affects a British accent when he picks up the phone. Shoe maven Steve Madden — whose IPO forms a central plot point — names his sought-after women’s shoes the Mary Lou and the Mary Jane. Goysiche stuff.

The end lesson of “Wolf of Wall Street” isn’t really crime doesn’t pay — but it might preach moderation for boychiks entering the finance game, as so many AEPi brothers have.

Walter Pupkin (De Niro), a Jewish-coded aspiring comic, had a replica talk show set in his room well before Kramer installed the Merv Griffin set in his own apartment. This feature, penned by Paul D. Zimmerman, also predates “Joker,” which mirthlessly cribs a number of its story beats and also features De Niro.

Masha and Pupkin end up kidnapping Langford, guaranteeing his release if the TV host gives Pupkin a standup spot on his show (he does, while Tony Randall, né Aryeh Leonard Rosenberg, guest hosts). Pupkin finishes his set by saying “better to be king for a night than schmuck for a lifetime.” But, Pupkin doesn’t get lifetime in jail. In fact, he gets out early, publishes a best-selling memoir and gets a talk show of his own, proving there is no one way to make it in America.

The Yiddishkeit on this one is undeniable, with Bernhard even name-dropping Shavuot and Jerry Lewis playing a jaded version of himself. It’s ironic then that De Niro is reputed to have used a number of anti-Semitic jokes on set to get Lewis’s dander up. Anyway, it was effective.

It would be exceedingly unusual in Jesus’ time for a rabbi not to have a wife and children. In this controversial film, written by frequent Scorsese scribe Paul Schrader, Jesus (Willem Dafoe) imagines descending from the cross, marrying Mary Magdalene (Barbara Hershey) and having many children by her. This move surely would have thrilled Jesus’ Jewish mother.

The script, based on Nikos Kazantzakis’s novel brings to bear an agonized psychology to the Christian savior — and so, a more human gloss on his life more readily accepted by Jews than gentiles.

“I’m a liar,” Jesus says in a provocative monologue. “A hypocrite. I’m afraid of everything. I never tell the truth. I don’t have the courage. When I see a woman, I blush and look away. But inside I have lust. For God, I smother the lust, and that satisfies my pride.”

It’s interesting that this is also the only film in all of Harvey Keitel and Scorsese’s collaborations where the Jewish actor explicitly plays a Jew (and also the only one in which Keitel was nominated for a Golden Raspberry Award, for his turn as Judas Iscariot.)

Keitel has been a dependable Italian for Scorsese, playing the devout Catholic Charlie Cappa in “Mean Streets” (1973) and as J.R. in “Who’s Knocking at My Door” (1967). Those performances are a testament to mutual understanding.

Scorsese gets Jews. Keitel, who grew up in Brighton Beach, the first-generation son of Eastern European immigrants gets Italian Americans (particularly ones that are gangsters).