The Nine Lives of Carrie Fisher 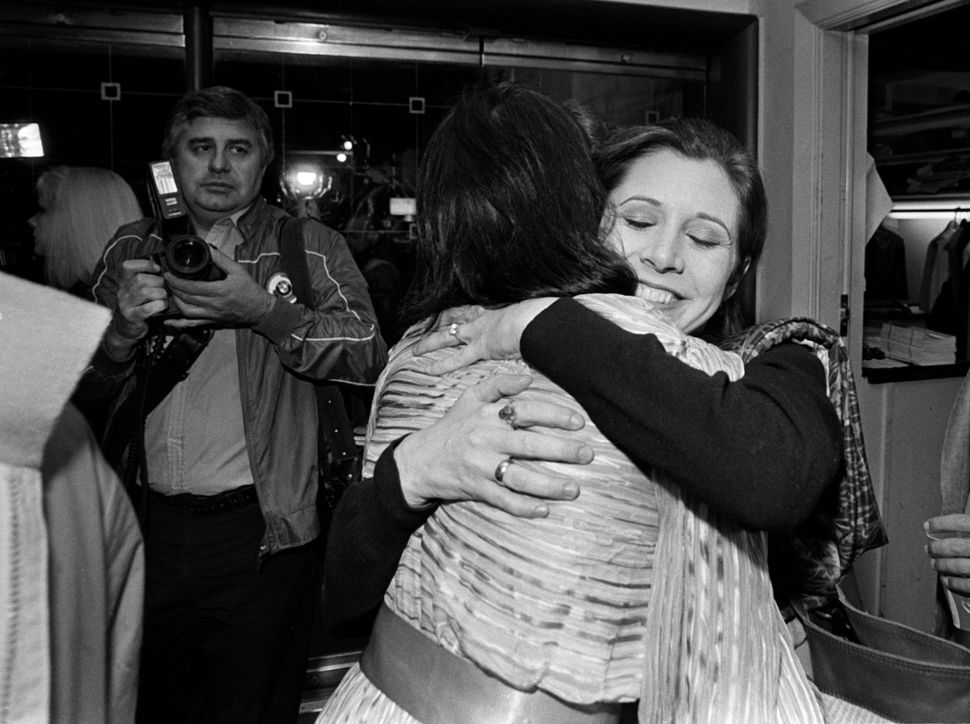 Carrie Fisher, A Life on the Edge

That’s just nine of the lives of Carrie Fisher that Sheila Weller unpacks in her sympathetic, and terrifically moving, biography of the late five-foot giant who occupied a mythic place in popular culture.

Best known as Princess Leia of the “Star Wars” movies, Fisher was celebrated by Paul Simon, her first husband, as the one-half of the “One and one-half wandering Jews/Free to wander wherever they choose” in his ballad “Hearts and Bones,” his melancholy and tender song of their union. In a relationship everyone is either a flower or a gardener, said their friend Mike Nichols. “Paul and Carrie were both flowers” that needed tending.

Fisher, daughter of wholesome musicals star Debbie Reynolds and less-than-wholesome crooner Eddie Fisher, grew up largely untended over a Beverly Hills childhood that was both deeply “wanting and privileged.”

If you were conscious during the 1950s (or ever saw Carrie Fisher’s “Wishful Drinking,” her sidesplitting one-woman show), you know why. When Carrie was 18 months old, Eddie left Debbie for Elizabeth Taylor, Debbie’s best friend and widow of his bestie, Mike Todd.

Thus Reynolds became a single mother, often away on tour or on movie sets, her ex- a deadbeat dad, and their babies Carrie and Todd (named after Mike) effectively fatherless. Like many kids of divorce, on visitation days Carrie waited for Eddie who was a no-show. At bedtime, Debbie medicated young Carrie with sleeping pills.

As a pre-teen her coping mechanism was writing in her diary. “Words saved me from a lot of stuff,” she said, but not from what her brother would describe as “the constant noise in her head [that] made her prone to be overwhelmed by her own mind.” This, says Weller, “was the unnamed, nascent bipolar disorder — from the insomnia to the voices in her head — that would plague Carrie throughout her life.”

At 14, she became the gardener tending her mother, encouraging Debbie to leave second husband Harry Karl. He had burnt through his own fortune and then spent everything she had, and then some.

Fisher built her adulthood on this unstable foundation. Both of her parents had left high school for their careers. She left Beverly Hills High for her mother’s career, to sing in the chorus of “Irene,” the revival of the 1919 Broadway musical Reynolds headlined in 1972. Like both of her parents, Fisher had a lovely voice. But her own musical tastes ran to singer/songwriters like Joni Mitchell and, prophetically enough, Paul Simon.

She didn’t want a career like those of her parents. She wanted to act, and won a role in “Shampoo” (released in 1975) as the rebellious daughter of Lee Grant, who seduces her mother’s lover, played by Warren Beatty. At 17 she enrolled in London’s Central School of Acting and Drama. On her own for the first time, she was out from the shadow of her glamorous mother. But also epically insecure about her looks.

After 18 months at Central she returned to Los Angeles to audition for a role in the serendipitously titled “Carrie,” Brian De Palma’s adaptation of the Stephen King novel. George Lucas attended the casting call because he was scouting for a space opera then titled “The Star Wars.” She wasn’t the beauty Lucas was looking for. But Fisher’s sophistication and sardonic wit — her social armor — was just what the Force ordered. So the Hollywood princess became Princess Leia, lust object for boys, stealth feminist for girls, and one of the first movie super heroines.

Cocaine became her drug of choice. It accelerated her metabolism, enabling it to keep pace with her racing mind. By 24 she was diagnosed with Bipolar 2, preferring her default drugs — Valium and Percodan — to the Lithium prescribed by the doctors “I shot through my twenties like a luminous thread through a dark needle, blazing toward my destination: Nowhere,” she wrote in “Postcards from the Edge,” her mordant semiautobiographical novel of 1987. Mike Nichols adapted it for the 1990 film starring Meryl Streep as the Carrie character, Suzanne Vale, and Shirley MacLaine as her Debbie Reynolds-like mother. Both were triumphs, establishing Fisher as the Dorothy Parker of the “Saturday Night Live” set. (Like Fisher, Parker had a Jewish father and Gentile mother, was known for her caustic wit, and had substance abuse issues.)

How to explain Carrie Fisher’s yiddishkeit? She played Jewish on screen, especially in Woody Allen’s “Hannah and Her Sisters” and Rob Reiner’s “When Harry Met Sally….” (To Fisher’s horror, Allen told her she gesticulated like “an old Jewish lady.”) Her speaking voice and writing voice ended sentences with question marks. If Freud dedicated his career to transforming misery into ordinary unhappiness, Fisher transformed misery to ordinary unhappiness and then added an extraordinary comic flourish. (“I have a visa for happiness but for sadness I have a lifetime pass.”) And obviously Leia is a misspelling of Leah.

Weller’s portrait describes Fisher’s many near-overdoses, the loving friends that saved her, her periods of sobriety and how she saved so many others. Her friendships were wide and deep. (Who else could claim Salman Rushdie, Whoopi Goldberg and John Belushi as close friends?) In the 1990s not only did she write for Oscar shows, she also “wrangled” her friends to be presenters and hung out in the green room to them at their ease.

She met Bryan Lourd, the talent agent, in the early 1990s and he moved in. They had a daughter, Billie, in 1992. Not long after, he left her for a man. The Hollywood daughter largely raised by nannies became a hands-on mother for Billie. Sobriety never lasted long. But she wrote and completed several novels, including “Delusions of Grandma” (1993). And she was in demand as a script doctor for movies like “Sister Act” and “The Wedding Singer.”

Some drugs worked. Pharmaceutical companies never continued manufacturing those that worked for her because there weren’t enough Bipolar 2s to make them profitable. So Fisher tried electroconvulsive therapy — during the 15-week Broadway run of “Wishful Drinking,” her 2009 one -woman show. And she wrote honestly and clearly how it helped in her memoir, “Shockaholic.”

Let Harrison Ford have the last word on Carrie, his “Star Wars” co-star who died at 61 in 2017. She revealed in “The Princess Diarist,” based on her journal while making the first film in the franchise, that she and Ford had an on-set romance.

She was always apologizing to him because he was older and seemed so sophisticated and she felt like “a hick.” He tried to reassure the 18-year-old. He said, “You think you’re less than you are,” he told her. And then he told her the absolute truth: “You have the eyes of a doe and the balls of a samurai.” Now, that’s an epitaph.

The Nine Lives of Carrie Fisher