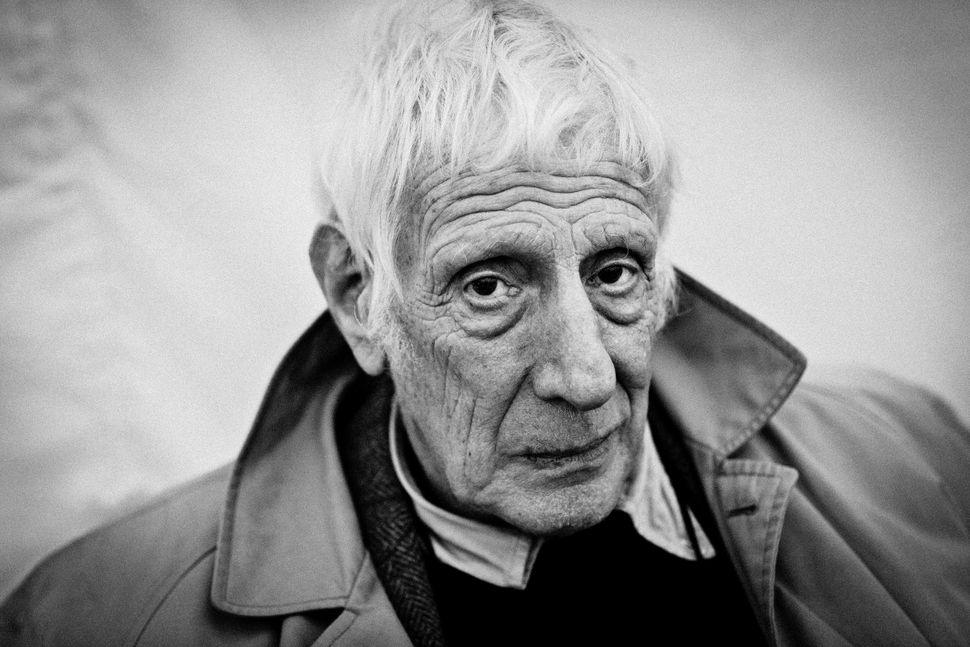 During youthful appearances in the influential satirical review “Beyond the Fringe,” Miller played a character who announced: “I’m not really a Jew, you know, just Jew-ish.”

The reductive caveat was repeated by Miller himself in a series of television interviews, where his sometimes convoluted verbosity staggered even the most pretentious talk show hosts. Miller specified that he was not interested in the Jewish religion, culture, or the state of Israel; he only identified himself as Jewish if anti-Semites were nearby.

Yet despite these reiterations, Miller’s connections to Judaism were clear cut, as his biographer Kate Bassett explained. Both of Miller’s parents were of Lithuanian Jewish origin, fulfilling the stereotype of Litvaks as intellectuals. Born in Ireland, Betty Spiro Miller (1910-1965) published biographies and novels, including “Farewell Leicester Square,” written in 1935, one year after her son Jonathan was born.

Its protagonist is Alec Berman, a Jewish film director who struggles with his identity, blaming a non-Jewish friend for not knowing the relief felt when “someone happened to mistake you for other than what you are.” Betty Miller described 1930s London, where a news vendor in Piccadilly Circus wears a badge that proclaims: “Clear out the Jews.”

At school, Miller’s best friends were Jews, including the neurologist Oliver Sacks and the antiquarian bookseller Eric Korn (1933-2014). Miller claimed that because Jews were numerous at his school, he experienced no anti-Semitism.

Yet in a September 2011 interview, Sacks disagreed, noting that when he, Miller, and Korn formed a literary society, it was disbanded by school officials who disapproved of a “lot of noisy, clever Jewish boys.”

In a comparable way, Miller told interviewers and colleagues with self-assurance that he did not look typically Jewish, although in the 1980s, he would be hurt when the British satirical television puppet show Spitting Image created an effigy of him, exaggerating his prominent nose into a vast beak, as if mocking anti-Semitic stereotypes.

In his own stagings, Miller eschewed such banal representations. When he directed Laurence Olivier as Shylock in a 1970 production of Shakespeare’s “Merchant of Venice,” Miller urged the actor not to wear any false nose to signify Judaism.

Among Miller’s innovations in this “Merchant” was adding a performance of the Kaddish after Shylock’s daughter Jessica marries a non-Jewish suitor. After she departs, Shylock dons a tallit.

These and related traditions were familiar to Miller, despite his refusal to be bar mitzvahed, because his father Emanuel Miller (1892–1970), one of the founders of child psychiatry in the United Kingdom, was observant, especially after the Holocaust.

Author of “Foundations of Child Psychiatry” and “The Growing Child and its Problems,” Emanuel Miller was, according to an obituary in The British Medical Journal of August 1970, “always gentle and tolerant in habit, with a humour that was quite invaluable… Intellectual enterprise and adventure were the breath of his nostrils, whether he found it in elucidating a Talmudic tract or in dissecting the basic problems of classification in psychiatry.”

Another memorial article in “The British Journal of Criminology” of January 1971 mentioned that Emanuel Miller’s older brother was an “accomplished Hebrew scholar” who died young. To honor his brother’s memory, the elder Miller maintained a “rabbinical slant” to his university studies: “To the end of his life, perhaps as a recreation, possibly as a compensation, he enjoyed in private the elucidation of difficult passages in the Jewish scriptures, to say nothing of the interpretation of such Jewish symbols as appeared to have become gradually more obscure. [Emanuel] Miller was by that time as fluent in Hebrew as, in his own time, was his elder brother.”

Unlike his son, Emanuel Miller was able to combine lifelong scientific research with Jewish tradition. His son Jonathan would accept some of his recommendations, such as to study zoology, but not others. The passion for zoology would remain, so that in April 1971, when Miller was invited on the UK radio program Desert Island Discs, he chose as a book to take with him — a five-volume tome, “The Invertebrates” by Libbie Henrietta Hyman, an American zoologist of Polish and Russian Jewish origin.

Differences in backbone clearly existed between father and son; the often-caustic Miller would never be described as “always gentle and tolerant in habit.” Emanuel Miller considered Moses, the law giver, as his ultimate hero, but colleagues likened him to Leonardo da Vinci in his wide ranging intellectual and cultural interests.

In his time, Jonathan Miller would astonish audiences with his variety of interests, expressed in the medical documentary program “The Body in Question” or imaginatively transposing Verdi’s “Rigoletto” to 1920s gangland Chicago in a popular staging. Yet Miller would demur when the term Renaissance man was conferred upon him, dismissing multifacetedness as a family custom.

Both father and son appeared to some observers to belong to an earlier era. Fellow mental health experts saw the elder Miller as someone transplanted from the 1850s. In 1971, Jonathan Miller published a book-length critique of the media theorist Marshall McLuhan, who dismissed him as having the “conventional stereotypical problem of the 19th century sensibility.”

More than chronologically displaced, for all his achievements Miller sometimes appeared stymied by an Oedipal complex. He would deliver surprise attacks upon elder cultural mavens whose range of knowledge and accomplishment rivaled his father’s.

He targeted Lionel Trilling in a memorial article about Lenny Bruce for the New York Review of Books in October 1966. Miller blamed the comedian’s tragic end on accepting a “commitment to utopian sexuality” after reading Trilling’s “Freud and the Crisis of Our Culture” (1955). Trilling wrote to the publication to disagree, and Miller backed off.

As he dealt with ongoing inner conflicts, Miller would identify anti-Semitism behind critiques of his work, as Alec Berman did in “Farewell Leicester Square.” Miller’s splendid early works for television were adapted from Plato, Lewis Carroll, and others. “Whistle and I’ll Come to You,” (1968) was freely inspired by a ghost story by M. R. James.

Despite being well received generally, “Whistle and I’ll Come to You” was panned by the critic and novelist Kingsley Amis. Four decades later, in a July 2008 interview, Miller seethed that Amis had attacked him as a “sort of trendy Jew,” although the review “couldn’t put it in those words.” In all fairness, Amis made no reference to Judaism in his review, not even indirectly; his objections were entirely about Miller’s infidelity to, or lack of respect for, the original.

Yet as Miller’s friend Oliver Sacks stressed about their schooldays, and his mother wrote about eloquently, the status of British Jews has always been complex, challenging, and nuanced. British Jews of Miller’s generation, who disavowed interest in their roots with flippant jests, found themselves on occasion far more interested and implicated than they might have believed.