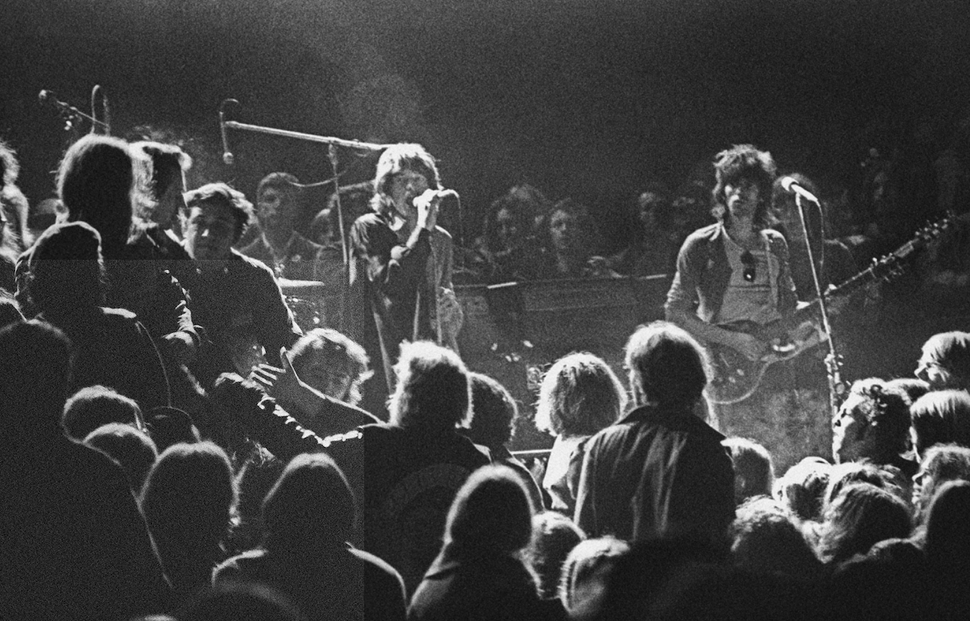 The Rolling Stones perform at the Altamont Free Concert on December 6, 1969. Image by Getty/Robert Altman/Contributor

His killing defined the legacy of the Altamont Free Concert in Tracy, California — which had aspired to be a Woodstock for the west coast — partially because the jarring moments that preceded it were caught on film.

Charlotte Zwerin and David and Albert Maysles’s Rolling Stones film “Gimme Shelter” (1970) is the Zapruder Film of concert documentaries, the best vantage of a critical inflection point of fading American innocence. And ironically, it helped the innocence claim of one of its major players when it was used as exculpatory evidence in the 1971 murder trial of Alan Passaro, the Hells Angel who fatally stabbed Hunter. Passaro was acquitted, his actions ruled self-defense.

But long before the jury reviewed it, singer Mick Jagger picked through the film in the editing room, asking David Maysles to rewind the tape at the moment of Hunter’s stabbing. Video of Jagger’s inspection is included in the film’s final cut; in it, Maysles stops the reel at a dramatic tableau. Hunter, a black man, is in the center of the frame in a lime-green suit, his arm raised and holding what appears to be a gun, which grazes a long knife brandished by Passaro, a white member of the Angels, who had been brought on for festival security. Jagger looks at the two figures, dynamic, but obscured in a blur of motion, and asks where Hunter’s alleged gun is – he can’t see it.

“I’ll roll it back and you’ll see it against the girl’s crocheted dress,” Maysles says.

Sure enough, you can make out Hunter’s black revolver, hard to discern in the dark of the night, contrasted with the light gray dress of his girlfriend, Patty Bredehoft, as he passes her to move toward Passaro. The scuffle happened while Jagger was performing “Under My Thumb.”

Altamont was meant to be the victorious swan song of the Stones’s ‘69 tour of the US. But instead of triumphalism, the lasting impressions from “Gimme Shelter” are in its verité postmortem of the concert’s disaster.

With three days of peace and music having idyllically elapsed at Woodstock that summer, a free concert in California seemed achievable in 1969. The Stones, with the aid of Woodstock producer Michael Lang, helped arrange a last minute relocation from Sears Point Raceway in Sonoma to Altamont Speedway. In the film, Lang, sporting a fringe jack, is preternaturally unconcerned about the concert’s prospects. His foil is the Stones’s pragmatic touring manager, Sam Cutler, who confides in a festival staffer that “the whole fucking issue is it isn’t safe.” It’s unclear what Cutler is referring to, though it might well be the whole affair.

If so, he was onto something. Despite Lang’s blasé attitude, the film lays out how even the planning stages of the concert teased the calamity to come.

In one scene tracking the concert’s venue problems, the Stones’s attorney Melvin Belli, calls a racetrack owner — likely Robert Marshall Jr. of Sears Raceway, who was also an attorney — who speaks to the risks of large-scale festivals with unpredictable crowd sizes.

“I was involved in Woodstock,” Marshall says “I’ve represented rock groups, and I’ve been involved, both as an attorney and as an executive, with festivals. No matter what anybody tells you, they’re a pain in the ass.”

“Don’t turn me into a proctologist,” Belli responds, “just tell me what I can do here.”

Altamont owner Dick Carter was keen to indulge the planners’ visions; he offered his track as a venue at the last minute, eager for publicity. That PR stunt would lead to financial ruin due to damage to the property. And the concert would become instantly infamous as the scene of Hunter’s killing, the drowning of one person in a ditch and the hit-and-run deaths of two other young people. In total, an estimated 850 attendees were injured.

Like Michael Wadleigh’s Woodstock documentary, “Gimme Shelter” paints a panorama of life on the festival grounds. Trails of cars twist along the highway, concertgoers strip naked, maybe high off the offerings of a man who, his eyes obscured by the brim of his black hat, hawks LSD and hashish.

But there’s an unsubtle menace in Zwerin and the Maysleses’s footage, shot by a crew of 22 camera operators, including a pre-”Star Wars” George Lucas. The Hells Angels and the free-spirited attendees engage in a clash of countercultures that turns physical. When men and women rush the stage during the Stones’s set, bodyguards, decked out in leather jackets bearing the Angels’ seal, push them back into the scrum. During Jefferson Airplane’s performance, an Angel strikes lead singer Marty Balin, knocking him out and spurring a testy exchange between the gang’s leadership and guitarist Paul Kantner.

But what is most striking about the film is the way the tension, leading up to the violent denouement of Hunter’s death, is allowed to ebb and then suddenly surge; scenes of strife are broken up by scenes of earlier concert dates and recording sessions.

The footage of Hunter’s stabbing is saved for the closing moments of the film, but is pointedly mentioned right at the beginning via a radio report, lending an anticipatory cast to the whole 90 minutes. Yet when the bloody crux is finally delivered, it comes at a surprising remove. Instead of being shown on its own, as other scuffles are, it is played on the small screen of an editing console for the film’s subjects — the Rolling Stones.

When they see it, they are recast in a pensive mode, juxtaposed with their earlier buffoonery: Jagger strutting onstage in an Uncle Sam hat, Richards’s baubles, a front-loaded photo session involving a donkey. But the film does not force accountability or pass judgment. The goal, after all, was never to make a movie evaluating a tragedy, but rather one about a band with perhaps too much influence.

While the shape of that mission changed in response to the festival’s troubles, the final product nonetheless fulfilled that criteria.

But in doing so, it brought the motives and processes of the filmmakers under public scrutiny. In early press about the concert, the Maysleses and Zwerin were squarely blamed for the outbreak of violence. As Michael Sragow noted in a Salon piece in 2000, Rolling Stone’s cover story on Altamont condemned the film’s production, accusing it of precipitating violence to catch on camera for the purposes of drama. The rest of the coverage took that account as scripture, although Sragow was able to debunk the vast majority of its claims as false.

Time has been kinder to “Gimme Shelter,” able to situate it as a candid document of a raw moment in the American timeline. In the last days of the 1960s, months after Woodstock, the Tate murders and the moon landing, an Edenic hope was shattered.

PJ Grisar is the Forward’s culture fellow. Contact him at [email protected]