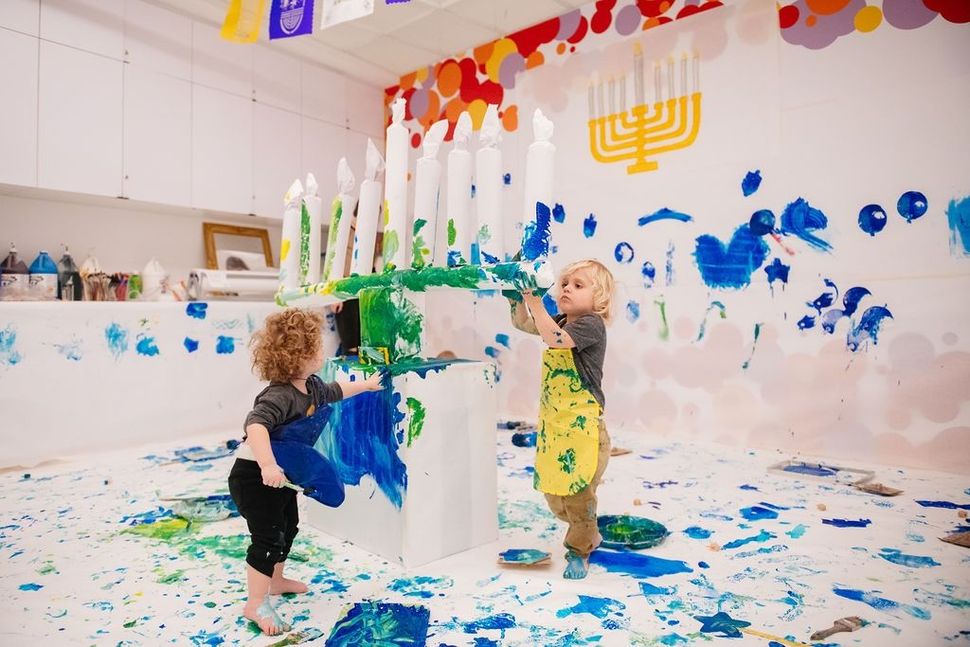 Hanukkah in Santa Monikah: Kids engage in a collaborative art project. Image by Courtesy of the Cayton Children’s Museum

Directly above the Disney Store and just across from the Cheesecake Factory on the top level of the outdoor Santa Monica Place mall, the Cayton Children’s Museum looks out onto a glittering central courtyard, where the mall’s oversized Christmas tree stretches up three stories. The star-topped tip sits just above eye level with the museum’s front doors.

Inside the Cayton, children dance to a Klezmer Kings concert, while in an art studio families color and cut Hanukkah sun catchers; a rabbi circulates, talking with kids and parents about themes of darkness and light.

Caitlin Swartz can’t lure four-year-old Lucas away from the Community Market and Café, where he is busy filling his cart with plastic produce and ringing it up, but she hopes to get him to the Hanukkah activities.

“My husband is Jewish, and we celebrate both holidays,” Swartz said. “I feel like Christmas tends to take over, and it’s important that Lucas gets both sides of his heritage.”

Last year, the Cayton moved out of the the lower level of the Jewish Federation office building, where it existed as the Zimmer Children’s Museum for 19 years, and opened in July in a 21,000-square foot former artisanal food court near the Third Street Promenade, one of Los Angeles’s most heavily trafficked shopping and entertainment districts, a half mile from the Santa Monica Pier. With its move to the beach, the museum more than doubled its budget, floor space and attendance, transforming a museum that started as My Jewish Discovery Place in 1991 into one of the premiere children’s museums in Southern California, and the only museum in Los Angeles entirely dedicated to children.

While the “Hanukkah in Santa Monikkah” festival offers multiple Jewish activities, the Cayton is not specifically a Jewish museum. Rather, it is a museum with a deeply Jewish origin story that over the years has evolved into a more ecumenical program. The Cayton is not a departure, but part of an evolution that started in the museum’s first years, the director said. 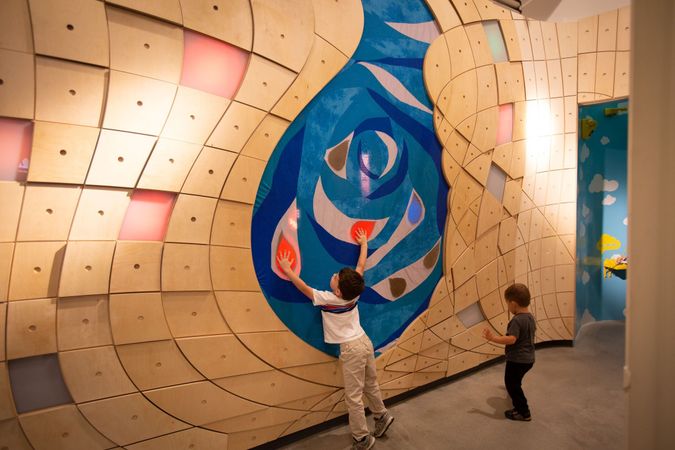 “All our programs are anchored in how to be a mensch, how to be best version of yourself, how to live life with derech eretz [resepct]. We never were, and are still not, a place to learn how to kasher a kitchen and build a Sukkah,” said Esther Netter, who founded the museum in 1991 in a 600-square foot classroom at the Westside JCC, with $20,000 from the Avi Chai Foundation and another $20,000 from the Jewish Community Foundation of Los Angeles. “All along our journey, we have been a place that is open to all.”

On this holiday Sunday, kids as diverse as Southern California – Jewish and not – are teetering atop a rainbow-colored meshed-in rope structure that canopies the space. While at the Zimmer about half of visitors were Jewish, here the balance is likely to shift to a broader audience.

Easily accessed by public transportation – a rarity in Los Angeles – the Cayton offers free membership to families who can’t afford it (admission is $14, annual membership starts at $105). The Museum is open on Saturdays, which it wasn’t when it resided in Federation headquarters, a heavily secured 12-story Wilshire Boulevard office building that was a put-off for walk-ins or tourists. The Cayton is on track to log 200,000 visitors this year and has capacity for 300,000.

Still, with the move from the Federation building to a more public space, the Cayton feels, at least on the surface, a little less Jewish.

At the Zimmer, children served plates of plastic food to each other at the Blue Bagel Café, and set up a Shabbat table in the playhouse. At the Cayton, kids pull food from the shelves and ring it up at the more generic Community Market and Café. At the Zimmer, kids operated medical equipment in a Magen David Adom ambulance, while at the Cayton they squeeze behind the wheel of a vintage fire truck, pilot a rescue helicopter, and ride a Coast Guard raft in a ball pit. 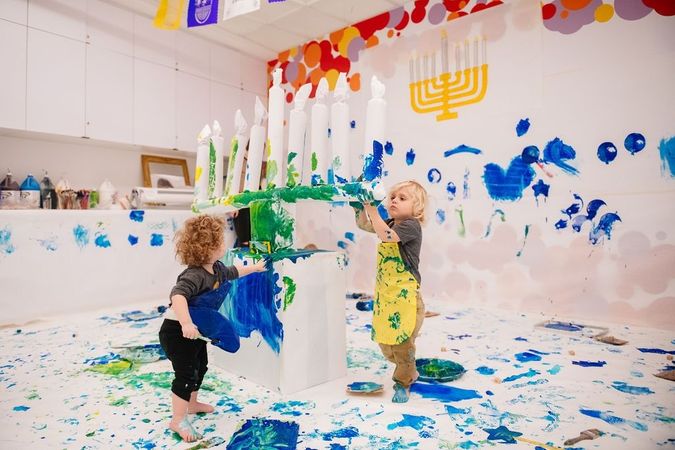 Hanukkah in Santa Monikah: Kids engage in a collaborative art project. Image by Courtesy of the Cayton Children’s Museum

But, even without the Hanukkah activities, the Jewish presence and sensibility are still palpable. Sayings on a vintage train board flip from rabbinic wisdom to quotes from Harry Potter. A mezuzah on the front door is sculpted to match the blades of grass that make up the donor garden in the lobby.

One of the more overtly Jewish spaces is the Wishing Wall – a feature that originated as a cork-board Western Wall at the JCC, and at the Zimmer looked more like the holy spot in Jerusalem.

Here, an uneven checkerboard of wooden blocks, with pegs and slots for notes, top a few foundational rows of Jerusalem stone. The blocks swoop to the side to encircle a softly textured blue flame, with pink and red flares where kids place their hands to activate light and vibrations. The more hands, the more intense the effect.

Behind the scenes, Netter calls this flame a ner tamid – the eternal flame that adorns every synagogue. She says the exhibit was inspired by the Kabbalistic creation story of God scattering light shards throughout the universe.

Netter, and the Cayton, are comfortable living in a nuanced zone where the museum remains connected and committed to Jewish values and more-than-token Jewish programming, while staying focused on the universal goal of helping parents raise mensches.

She points to the water table as an example of where fun and entertainment cross over into community building.

Shaped like a giant fidget spinner topped with a 3-D topographical map of terraced green hills and canals, the exhibit is designed so that any one action – moving a pipe, setting up a dam – flows to someone else’s spot. Today, a young father with a cross tattoo (parents are encouraged to play) and a 10-year-old boy in a white shirt and black velvet kippah have spontaneously started shooting an arc of water back and forth to each other.

“I think the ability to communicate and see different perspectives is the way to break down barriers and discord,” said board member Aryeh Goldberg, who was there with two of his younger kids. “Here they can learn these lessons organically, without any forced diversity training that makes it artificial.”

Kids are especially drawn to a veterinary hospital tucked in an alcove. Usually stocked with stuffed animals, real animals were brought in for the Hanukkah festival.

“They were listening to the animal’s heart, learning to take care of animals with emotional sensitivity,” said Elad D’vash-Banks, who sat in the Community Café with his husband, Andrew, as three-year-old twins Ethan and Aiden served them “breakfast.”

The move to Santa Monica necessitated doubling fundraising to $4 million a year. Barry and Andrea Cayton, daughter of real estate tycoon and Jewish philanthropist Jona Goldrich, named the museum with an undisclosed gift. The museum has attracted corporate funders as well as foundations, and many Jewish foundations and donors stuck with the museum as it evolved.

Other Jewish individuals and foundations are being a little more circumspect. Netter approached The Diane and Guilford Glazer Philanthropies for a naming gift. The foundations opted instead to make a pilot gift to fund last week’s Hanukkah festival.

“I think the Cayton is still figuring out what it is,” said John Fishel, director of Glazer Philanthropies, who, as president of the Jewish Federation of L.A. in 1995, invited the Zimmer into the Federation building. “The quintessential question is, if you are interested in something focused on building stronger Jewish life, will it happen at the Cayton? I think the answer is yes, but it will not be solely for Jews, and then it becomes a question of values and priorities among those interested in supporting Jewish children’s programming.”

Fishel attended the Hanukkah festival, and said he plans to ask the board to fund three more holiday festivals for 2020.

Netter is not worried that Jewish funders – or visitors – will be deterred by the fact that the Cayton also hosted a Dia De Los Muertos festival in October and is planning a program for Diwali, a Hindu festival of lights. In fact, those were popular programs at the Zimmer. “We see our role as helping to support families in raising kids who understand what it means to exist and play and explore in a community, and how to respect one another,” Netter said. “We peel away that fear of otherness, and present various cultures in an accessible way.”

And in childrearing, there is enough that is truly universal to bring everyone together.

Just beyond the museum exit, parents, in a familiar scene, are trying to pull the kids out of the gift shop.