For Israeli comics, English is the next frontier 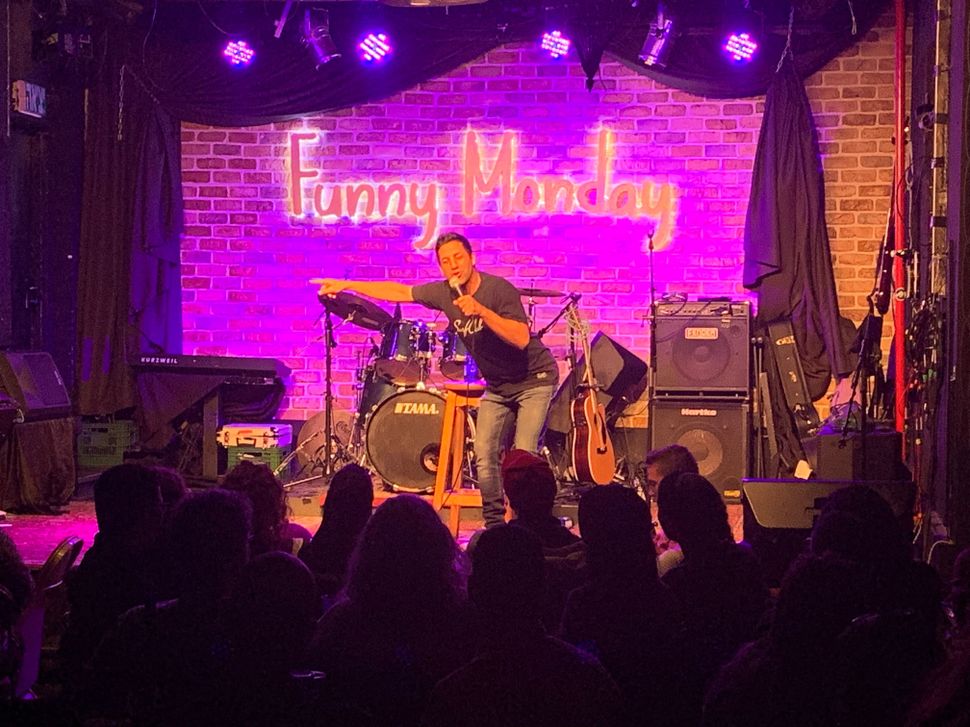 Funny Monday: Shahar Hason tries his material out in English at the Bar Giyora club in central Tel Aviv. Image by Aron Heller

TEL AVIV, Israel _ With his motormouth monologues and poignant punchlines about the absurdities of Israeli life, Shahar Hason has established himself as one of the country’s most popular stand-up comics. But when he drops his native Hebrew for the risky gambit of entertaining crowds in English, the words sometimes escape him.

“People always tell me you need to work on your accent. Like that’s the problem. I need to know the language,” he explained in a recent bit. “It’s like you going to go to a homeless people and tell him: ‘You need to buy a Hamsa (amulet) for the wall.’ He needs a house.”

But the goal of his seven-year-long passion project to make it in English is no joke. With weekly performances in Tel Aviv to foreign tourists, new immigrants and curious Sabras, Hason and several others are trying to spearhead the latest successful export of Israeli entertainment. After Gal Gadot captured Hollywood as Wonder Woman and various Hebrew TV shows have been adapted into American hits, not to mention several Israeli musicians making a name for themselves in English, comedians are saying it’s their turn.

The appetite for new stand-up is there. Louis CK, Chris Rock, Jim Jefferies and Jerry Seinfeld have performed before sold-out Israeli audiences in recent years and Tel Aviv already has a vibrant English stand-up scene made up mostly of ex-pats. The insurgence of local talent has now created a close-knit community in which you can catch an English-language show almost every night of the week. The two dozen or so who perform in English stand-up now have regular private gigs before high-tech executives, university foreign students and visiting Jewish groups. YouTube and social media offer them a platform to reach foreign fans and some have even booked shows overseas, where they offer a uniquely Israeli take on Jewish humor.

“The rawness and brashness of Israelis lends itself well to comedy. We’re authentic and have no patience for hypocrisy,” explained Yossi Tarablus, 42, a comic who did a European tour with Hason. “Sure, we are limited in the way we can improvise in English and sometimes we need to hold back. But there are advantages to that too. With our accents, as outsiders, we can get away with more. I call it the ‘Borat effect.’”

The centerpiece of the local scene is the weekly “Funny Monday” show at the Bar Giyora club in central Tel Aviv that has become a magnet for tourists. Under a neon sign, in a dimly lit underground bar, the comics take the stage for two hours before some 100 patrons with a camera placed in the back of the room to record the highlights for the weekly YouTube roundup. The intimate atmosphere offers a place to try out new material — and new vocabulary. 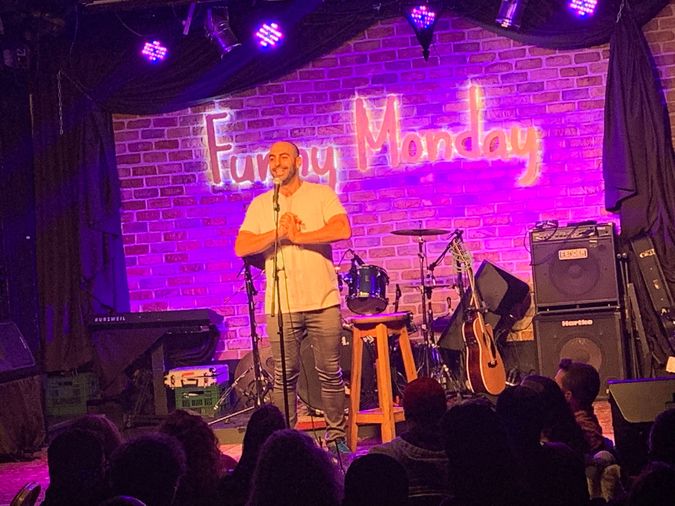 The native-born comics say they are motivated by a quest for new adventures, a novel approach to mastering the language and a desire to project a different, funnier face of Israel to the world. They readily admit they aren’t ready yet for U.S. prime time, and much of their humor these days is still confined to the linguistic self-deprecating variety.

When he stumbles, the 43-year-old, elastic-faced Hason reverts to his trademark physical humor and intersperses silly Hebrew expressions as he laughs off the gaffes. He said he was patient for international success.

“I know it sometimes sounds weird guys, but we are doing it for seven years. Just imagine, seven years, and that’s the level that you hear right now. I’m not joking,” he quipped. “Everything is a process. Even to learn the word ‘process,’ it was a process.”

Hason can take solace in the precedent set by Gad Elmaleh, the popular French comedian known as the “Seinfeld of France,” whose lengthy struggle to transition into English was well documented and eventually led to a successful U.S. tour and Netflix special.

As Israel has turned to the West and taken on a far more global outlook, its entertainers too have been looking to break out of the limited scope of their geography and language. Comedy, with its emphasis on context and word play, is harder to export. But built into the craft is also an edginess that dares to try, and often fail at, new things.

“I couldn’t care less even if I don’t earn a shekel. Artistically speaking this is rewarding knowing I could potentially reach a larger audience,” said Yohay Sponder, Hason’s co-host. “As a comedian you want to grow and break down walls.”

Speaking to The Forward in Hebrew, the 37-year-old Sponder said the initiative that started out for him as a creative way to learn English has evolved into a form of ambassadorship for Israel, with all its peccadillos.

“There’s a lot to laugh about here and a lot of things to figure out comically, and I feel a responsibility to do that,” he said. “But we’ve got a long way to go. I’ve got to keep working and keep studying English. As far as I’m concerned, I’ve just begun.”

If anyone can judge the local talent, it’s Avi Liberman. The Israeli-born, Texas-raised and now Los Angeles-based comedian has been bringing top American stand-ups to Israel for more than 15 years for the “Comedy For Koby” tour, which raises funds for the Koby Mandell Foundation for victims of terror. What started as an attempt to boost Israeli morale amid a wave of Palestinian violence in the early 2000s has turned into a bi-annual pilgrimage for comedians that’s given the locals a taste of performers like Jeff Ross, Brian Regan, Gary Gulman, Roy Wood Jr. and Craig Robinson. Over the years, word has gotten out in comedy circles that Israelis make good audiences.

Liberman and his American guests have also made cameos on “Funny Monday” alongside the Israelis, and Liberman has helped make connections for the Israelis in the U.S., so he’s been able to watch their evolution.

“Bottom line: Funny is funny, and these guys are funny, even if they speak with an accent,” he said. “The thought of me doing standup in Hebrew is daunting and I admire the fact that they even make the attempt. That they can perform, and kill, is even more impressive.”

Liberman said Hason, in particular, was a workhorse and a student of stand-up history whose humor and stage persona could cross over to Americans.

“I have the utmost confidence that any one of these guys could get up in an American club and go do a really great job,” he said.

Unlike Liberman and his American visitors, the Israelis are far more at ease taking cracks at local politics and religion in Tel Aviv. After doing a shtick about the insanity of Jews chopping off their penises to prove their loyalty to God, Sponder got personal in a recent Monday night show sharing an anecdote about how the first time he masturbated was the same day Yitzhak Rabin was assassinated. Convinced he had caused the tragedy, he said he refused to touch himself again.

“Until Bibi was elected,” he quickly corrected. “Now I do it every day, but that guy just keeps getting stronger.” The show got progressively raunchier from there, as the crowds kept rolling even with his broken English.

When one of his jokes bombed, though, Sponder broke the silence by once again poking fun at his amateur language skills.

“I guess that joke was too smart for you guys, or maybe I didn’t say it correct. One of the two,” he said. Then he solicited help from the audience for a translation. “Thanks. You are helping us with our English, and you paid for this,” he said to chuckles. “What chutzpah! That’s the most Israeli thing you can do – put on a show in a language you don’t know and then charge money for it.”

For Israeli comics, English is the next frontier