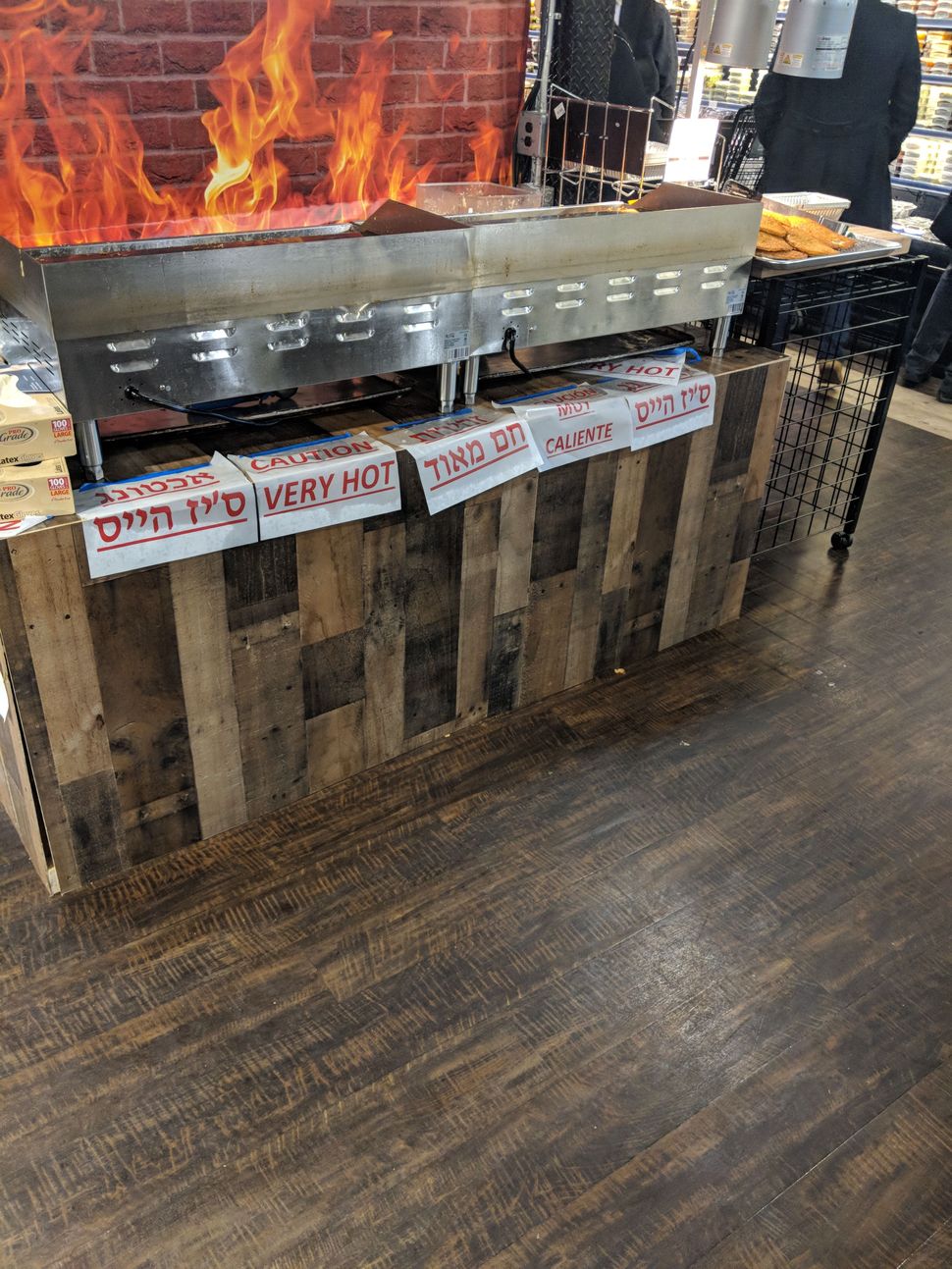 In Four Languages: A latke station in Monsey Image by Aviya Kushner

On Friday in Monsey, I went with my youngest relatives to one of the giant kosher markets and bought a hot latke to eat right there, on the spot. Monsey, where I grew up, is the kind of place where that is possible; the latke stand had signs in four languages — Yiddish, Hebrew, English and Spanish. On Saturday night, I found myself barricading my parents’ front door with chairs.

We had just heard that a knife-wielding man — initial reports said machete — was not far away. The perpetrator was still at large. Multiple people had been stabbed.

We were glued to Twitter, refreshing “Monsey stabbing” in English and Yiddish, in all its permutations. We read the details on the license plate and had conflicting details on the car model. White? Silver?

I kept glancing at the door.

It was a tense few hours until we learned that someone had been stopped by police. The adults in the house went to sleep — or tried to. In the hours and days since, I keep reading this journalistic take: “Jews are terrified.”

But I had a different word in mind that sleepless night and in the days since — not just terrified but “clarified.” What I feel now is deep and unwavering clarity, despite the confusing rhetoric of this awful time. It is a clarity that comes from seeing something on home terrain. 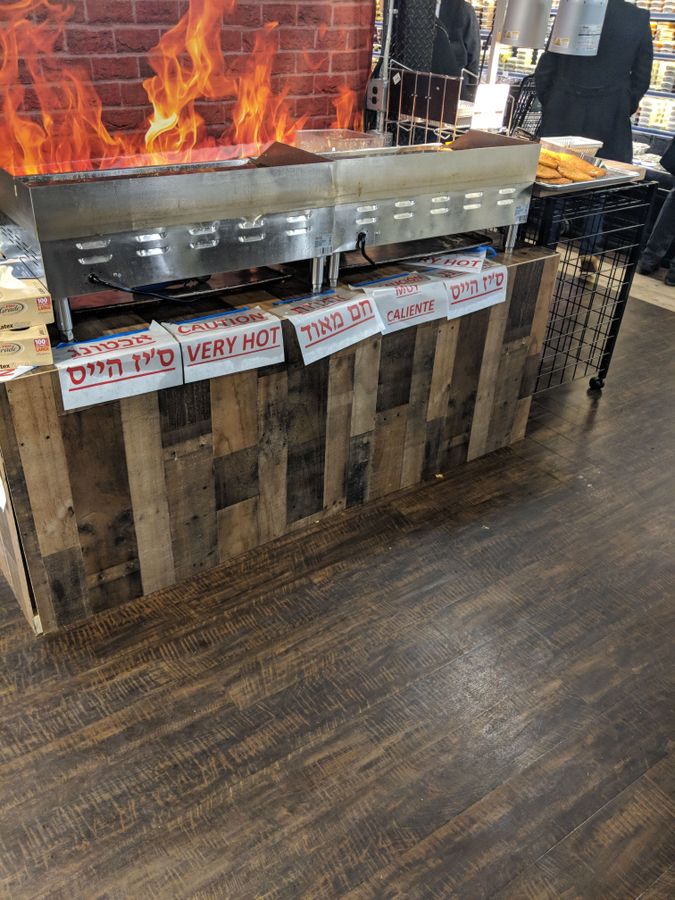 In Four Languages: A latke station in Monsey Image by Aviya Kushner

My family has lived in Monsey for a long time, since the days when it had only one kosher butcher. I remember a man smoking kosher meat in a driveway; I remember the large percentage of my elementary-school teachers with numbers tattooed on their arms. I remember the brother of the builder of my parents’ house, who had no tongue because — as I later learned — the Nazis had cut it out.

I also remember the pastor’s wife on Route 306, who raised bunnies; running a church in the middle of Monsey was a hopeless task, then and now, so she focused her energy on rabbits. I even remember the long-ago days when the hasidic bus, which I took to high school and which now runs dozens of buses a day, was just a lone van.

Though I attended yeshiva and grew up in an all-Jewish world, among Hasidim, I now work in the secular world. I teach creative writing. I don’t dress in an identifiably Jewish way; there is no wig on my head. And so, from the inside, I have seen first-hand what is happening on American campuses, and in so-called liberal society, something my parents’ hasidic neighbors know almost nothing about. An urban art school is not a place where the ultra-Orthodox are usually found; neither are the various places the writing community gathers, the places where I have gone to learn and speak. My road has often been a solitary path, one I have had to make on my own. I have heard the comments, listened to the way they have ratcheted up.

“Why aren’t we reading Mein Kampf? You said we would be reading important works of nonfiction.” (2009, undergraduate student)

“The problem with this book is that only Jews care about the Holocaust.” (2015, graduate student)

“Kafka is a white male heterosexual who comes from privilege — why are we reading him?” (2015, graduate student)

Then there was this unforgettable question I was asked while on book tour for “The Grammar of God” in early 2016: “Do you think the Jewish people will die out, and if so, when?”

Every year during Yom Kippur I think of people who have died in the forms of death described in the u’netaneh tokef prayer, one of the most terrifying — and yes, clearest — moments of the Jewish year. It is about who will live and who will die, and when. This year, with the machete attack in Monsey, those medieval deaths sung by the chazzan are now also a real threat for American Jews. And in particular — visibly religious American Jews.

Lately, I have been considering my own naiveté in thinking that I, unlike so many of my relatives or Jewish-writer forbears, could straddle multiple worlds — religious and secular, Hebrew and English — in that rarest of states: safety. That I could ignore the comments I heard, and that it didn’t matter that much, in the end, if Kafka was being rebranded as white and privileged, despite his clear articulation of a coming nightmare.

‘Lately I have been considering my own naiveté’

But my naivete is not mine alone.

There has been too much silence, too much refusal to listen and to see, and too much acceptance of attacks against the Jewish community, in words and in worse than words. And perhaps within the Jewish community there continues to be a lack of awareness of anti-Semitism in America—its persistence, prevalence, and violence.

The FBI Hate Crime Statistics tell a story that is surprising to many; it is that every year, hate crimes against Jews vastly outnumber those involving any other faith.

How do the anti-Semitism numbers compare to the numbers of hate crimes against blacks and Latinos?

There are less than one-tenth as many Jews in America, as estimates of the number of Jews vary from 4.4 million self-identified Jews (1.8% of the U.S. population, according to the American Jewish Population Project at Brandeis University); other estimates range from 5.7 million to just over 7 million, and these include Jewish adults who don’t identify as Jewish.

Statistically, an American Jew is more likely to be a victim of a hate crime than someone black or Latino in America. Shocked yet?

You might say — wait, what kind of hate crime? Is it words or actual violence?

In 2018, there were 24 hate-crime murders in this country; half were Jews, with eleven killed at the Tree of Life Synagogue and one at Chabad at Poway. I still haven’t absorbed that fact, even as my hometown becomes a statistic.

‘Statistically, an American Jew is more likely to be a victim of a hate crime than someone black or Latino in America.’

I sometimes make the mistake of letting myself read the comments section on any article on anti-Semitism. Commenters invariably doubt the reports of anti-Semitism, saying the statistics are not real or not true; in other words, anti-Semitism is fake news. Commenters also try to change the subject to hate crimes against other groups in America, as well as those outside America — to Palestinians in Gaza. To anything but American Jews experiencing anti-Semitism in America. Meanwhile everyone from the former mayor of New York, Rudy Giuliani, to the President himself makes anti-Semitic statements that would have been unimaginable a decade ago, or certainly in my childhood.

Meanwhile the language keeps ratcheting up. The year 2019 ended with an increase in violence to match the increase in rhetoric. A brazenness. A turn to guns and machetes.

I expected the rising tide of violent anti-Semitism to be mentioned in the last Democratic debate, given the Jersey City shooting at a kosher supermarket, the kind of thing previously seen in Europe but no, not here. I expected it to be discussed on literary social media. I expected historians to weigh in on how the rise of anti-Semitism often means the demise of a culture. But none of that happened. So I found myself thinking of Jewish writers of the past, who had seen all this before.

This machete attack seemed like it came straight out of Isaac Babel, who described Jews split by axes. Something changed in me as I put those chairs up against my parents’ door and then removed them hours later; something changed as I viewed the face of Josef Neumann, whose family released the terrifying image, and realized that what I let myself imagine from Babel’s hundred-year-old report was now true in my hometown.

I realized that I don’t need to hear anti-Semitism discussed in a debate. I don’t need any literary analysis or sharp Twitter commentary to know this: anti-Semitism is in America and it is violent. There is no need for clarification, but there is a need for amplification.

All of us must become aware of the persistence of hate crimes in the U.S. and in that process, admit and acknowledge its existence to ourselves; the FBI hate crime statistics should become required reading. Journalists and college faculty and others who have the power to shape conversations have the obligation to review the data; it’s a matter of life and death. And above all, it’s about the future.

All of us must ask ourselves why so many hate crimes are committed by juveniles and recognize that the future of America will be blood if we don’t do something. The U.S. Commission on Civil Rights found that “the highest percent of reported post-2016 election hate incidents were in K-12 schools,” a finding that should alarm us all. “Educators, researchers, parents and students should pay attention to bullying and hate-related incidents in schools and actively work with students and school communities to prevent them,” the Commission wrote in its 310-page report.

Jews and non-Jews must face the violent anti-Semitism that has marked the past several years, and that starts with admitting that it exists. It starts with actually looking at the image of Josef Neumann’s face — difficult as that may be. Next, I believe we should focus on the young. It’s not just K-12 hatred. The “Equity and Diversity Office” at universities must recognize that anti-Semitism is a problem; it is not acceptable to issue dicta on every form of hatred, from racism to Islamophobia to transphobia, while ignoring anti-Semitism as it rages.

Everyone must recognize that the future of America — from the halls of academia to yes, our safety in our houses, as in the house in Monsey — is at stake. I hope Jewish faculty will serve on diversity committees and create necessary new alliances. I also hope that all college professors, Jewish or not, and administrators will learn to recognize anti-Semitism, and step in when they hear it. This is not a burden Jewish students and faculty should bear alone, or in silence.

In the past year, two senior faculty members at prominent colleges told me they were retiring early due to anti-Semitism. We need to make sure this does not become a wider trend.

We don’t live outside of history, but within it. We don’t live outside the sound of thin silence—or perhaps the thin sound of silence—that u’netaneh tokef describes. The prayer is devastating and moving because it is so clear. At its core, tells of the two parts of each of us: life and death. The before and the after.

Both parts of home are true for me now, distinctive and clear as prayer: latke and machete. Supermarket snack and supermarket shoot-up.

Past and present. What I remember of both Monsey and America, and what is. Let us use the force of clarity for urgent and necessary change.

Aviya Kushner is The Forward’s language columnist and the author of The Grammar of God (Spiegel & Grau). Follow her on Twitter @Aviya Kushner