In 1960, Clifford Odets wrote his final film — for Elvis 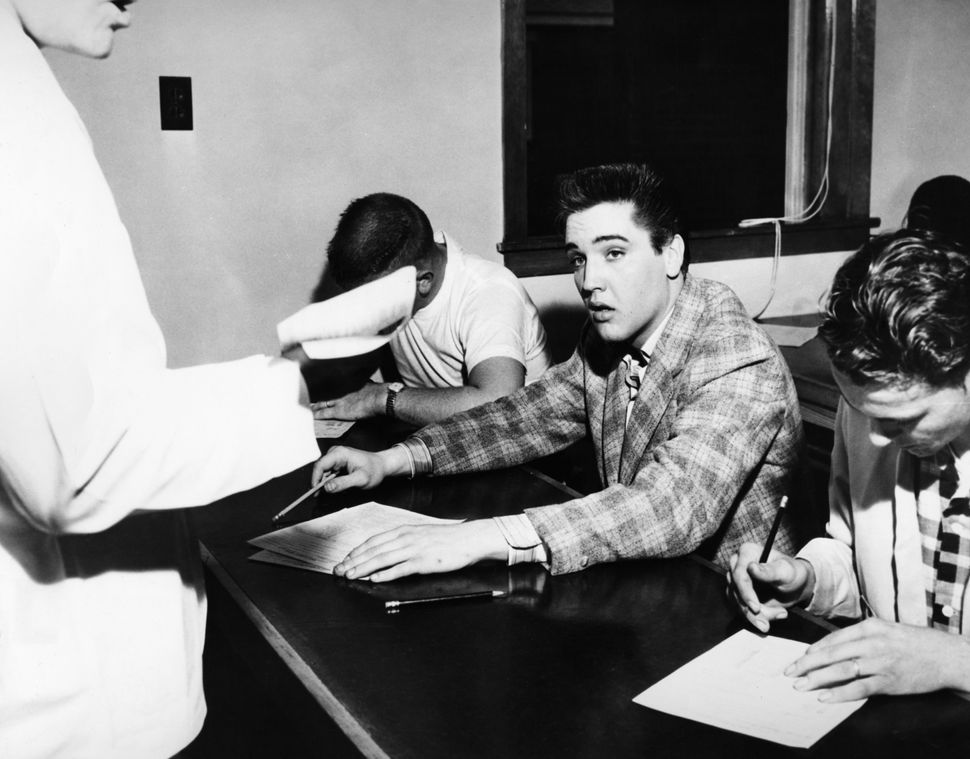 Wise men say only fools rush in to a vanity film project for a singer of limited acting ability. That didn’t stop Clifford Odets, at least when it came to the King of Rock and Roll.

The year was 1960, and the socialist playwright was entering his third and final decade working in film. His turn toward Hollywood was about to hit a low point. Odets was a first-generation success story, heralded as the next Eugene O’Neill, for his unflinching portraits of working-class life. But by the ‘60s, Odets — who had just a few years earlier drew the ire of his old New York world for cooperating with the House Un-American Activities Committee — was on the outs. Elvis was very much in.

Producer Jerry Wald at Fox cast Elvis as an aspiring writer with a criminal record in “Wild in the Country,” based on the novel “The Lost Country” by J.R. Salamanca, a first time writer whose six books are now mostly out-of-print . Odets signed on to write the screenplay.

In some ways, the film, in which Glenn Taylor (Elvis), receives probation in a small town after drunkenly-injuring his brother, is not so distant from the socially-aware fare Odets had been working on since the ‘30s, when he was a playwright in residence for the Group Theatre.

But it was still a picture with Elvis, who, say what you will about his singing, was not exactly Lee J. Cobb.

To his credit, Odets tried to stay true to his vision of a rural American story. This, after all, was the tale of a tortured, aspiring intellectual trapped by the expectations of his parochial surroundings who ends up wrongfully accused of manslaughter. Injustice marked the material, which was also, according to the trailer, “Tense! Torrid! Tempestuous!”

Capital got in the way, as it always does. Odets got into regular tiffs with the studio over script changes. The screenwriter was fired before filming began, barring him from any further rewrites. The movie still changed, as Elvis’s manager Colonel Tom Parker’s insisted that Elvis sing throughout the film. (While he wrote “Awake and Sing,” musicals weren’t exactly Odets’s bailiwick.)

Elvis was mismatched with the script, which got quite heavy. The studio changed Odets’s original ending, where Glenn’s psychiatric counselor, Irene (Hope Sperry), successfully commits suicide by driving her DeSoto into a barn after test audiences objected.

The film didn’t work, though it produced the song “Wild in the Country,” for Elvis, which did OK numbers on the Billboard charts. Even after Odets left the project, there was an incongruous tone on the set, as director Philip Dunne seemed to want to make high art out of an Odetian potboiler about a social pariah.

According to Turner Classic Movies, Millie Perkins — who co-starred as his childhood sweetheart in “Wild in the Country,” her second film after playing Anne in “The Diary of Anne Frank” (1959) — called Dunne an “intellectual poseur.”

Elvis provided a syrupy-voiced soundtrack that clashes something awful with Odets’s dialogue. But on set, Dunne played the Fifth Brandenburg Concerto for the Lord of Graceland during love scenes to help him get in the mood.

“I think I won a unique place in the directors’ pantheon as the only director ever to make Elvis Presley listen to Bach,” Dunne wrote in his memoir “Take Two: A Life in Movies” (1992). “As a matter of fact, he loved it.”

Reviews for the film were negative, with Bosley Crowther of The New York Times lamenting how Elvis, who showed some promise as an actor in his last picture had “retrogressed.”

“So have Jerry Wald, the producer; Philip Dunne, the director; and, alas, Mr. Odets,” Crowther wrote.

It was to be Odets’s final film. The writer died of stomach cancer two years after the movie’s release at the age of 57.

In “Memoirs of an Amnesiac,” Odets’s friend, the pianist Oscar Levant, wrote, “it was humiliating that Odets had to write that kind of picture at all, but he needed the money. Everything he was against, in the beginning of his career, he wound up doing himself.”

In 1960, Clifford Odets wrote his final film — for Elvis