Why Ladino will rise again 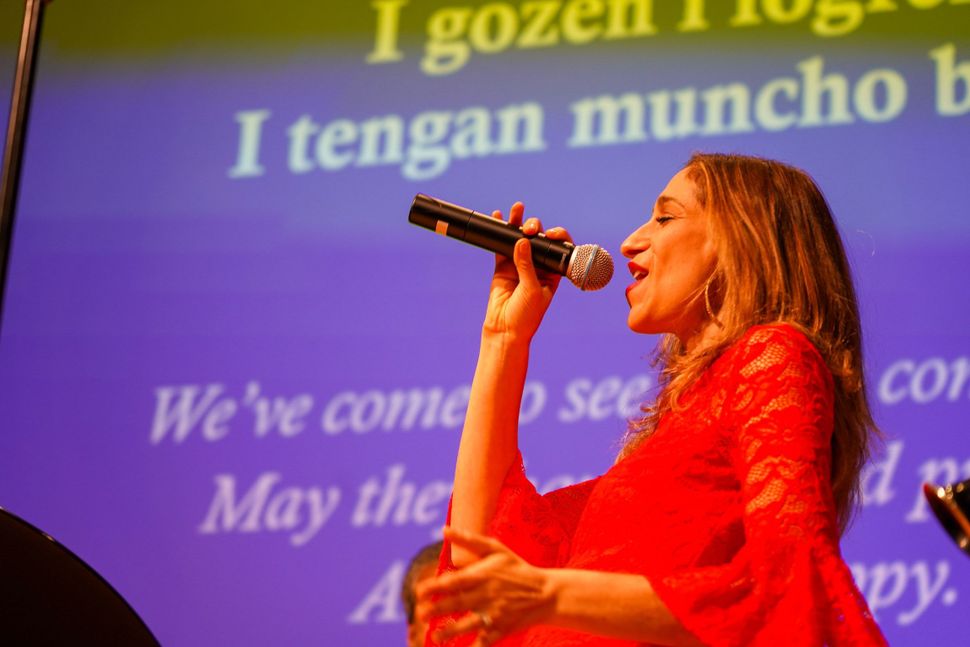 A sold-out crowd packed the house at the Center for Jewish History — and even filled an overflow room viewing the proceedings on screen — at the third annual Ladino Day in New York, home to the largest Sephardic community in America. Tight security and what speakers described as a “daunting time” for “Jews and Hispanics, refugees and immigrants” did not stop language lovers of all ages who came to celebrate Dia Internasional del Ladino, often abbreviated as DIDL.

Ladino is one of the most important diasporic languages in Jewish history. Also known as Judeo-Spanish, or Judezmo, Ladino is a Romance language — a variety of Spanish that includes both words and phrases from Hebrew, Turkish, Arabic, Greek, French, and Italian. It originally developed in medieval Christian Spain; after the expulsion of the Jews in 1492, it moved along with Jewish exiles, and then developed independently of Iberian Spanish. For five hundred years, Ladino thrived, and was the mother tongue of generations of Sephardic Jews.

“The numbers are sharply declining but the resurgence of interest in Ladino is thrilling.”

Though Ladino has been labeled an “endangered” language by UNESCO, because of its dwindling number of native speakers, Sunday’s afternoon-long program of musical performance, poetry, scenes from a play, talks by scholars, and a panel featuring millennials with a deep interest in Ladino was vibrant and multi-faceted. Most important, it seemed to offer some hope for the future, with over 300 people listening raptly.

“The numbers are sharply declining but the resurgence of interest in Ladino is thrilling,” Jane Mushabac, professor emerita of English at CUNY and the writer of Sephardic fiction under the pen name Shalach Manot, told the crowd at the event, which she co-created with Professor Bryan Kirschen of SUNY-Binghamton, an assistant professor of Romance Languages and Linguistics whose research focuses on Judeo-Spanish. “You have come to the right place.”

Still, the murder of 90 percent of Ladino speakers who came under Nazi occupation was not far from the minds of many of the assembled.

“I have a theory” on how to revive Ladino, the singer and activist Sarah Aroeste told the crowd. Her theory is that children are the answer, and so she has devoted herself to composing Ladino songs for children, and she taught one of her songs to the crowd, which numbered over three hundred people.

Aroeste’s stirring singing, as her grandparents’ honeymoon video played in the background, was the emotional high point of the event. Her Macedonian grandparents honeymooned there and in Greece in the mid-1930s; though they survived, everyone else pictured in the film was murdered.

As she sang, the pianist Shai Bachar wept as he played, and when she finished, it was to calls of Bravo!

Another highlight was a fascinating panel of Generation Y and Generation Z Ladino speakers, moderated by Kirschen, who asked each panelist to name a favorite Ladino word, phrase, and song.

Emma Youcha described how their 92-year-old grandfather “grew up with Ladino spoken around him, and I heard it being spoken about.” At Tufts, Youcha, described in the program as both Sephardic and Ashkenazi, enrolled in a Ladino class; they offered this favorite word to the crowd: fortuna, which is Youcha’s grandmother’s nickname, and means “luck” and “fortune” but can also be “storm.”

As for a favorite phrase, Youcha went with los korasones son espejoslos, or, “hearts are like mirrors.”

Youcha described how learning Ladino, and then leading a five-session Boston Workers Circle course in Sephardic culture and Ladino “made me confront how little the most well-meaning of Ashkenazi institutions know about Sephardic history, and how profound that erasure is.”

This was echoed by panelist and current Brandeis student Robert Carlson, who said “there is an interest and need to learn about Jews in the Islamic world.”

Carlson offered the following favorite Ladino words and phrases: karpuz, or watermelon; and kien bien se kere, en poko lugar kave — or “those who love each other can even fit into a small room.”

In terms of news, there was some, with the announcement of a new digitization project that would encompass about one-fourth of the 2600 pieces of Ladino literature in the world, including a newly discovered World War I diary in Ladino by a Sephardi soldier.

The program began with moving performances of Ladino songs by Danny Elias, accompanied by Maurice Sedacca on guitar and oud, Marco Brehm on double bass, and Casey Bond on percussion; Elias explained that he learned these songs from his father, who learned them from his mother, who was largely illiterate but knew hundreds of songs. The first song Elias sang, about Avraham Avinu or Abraham our father, was clearly familiar to nearly everyone there, as hundreds of people sang aloud. The Ladino love songs got everyone singing, too, and my immediate neighbors swaying.

The Ladino play, “Forsyth Street,” featured a young woman who comes from Turkey to join her fiancé in New York; but when she arrives, he has no job. She offers to find a job to help finance the completion of his studies, and while working at a dress shop, she meets her fiancé’s love interest; apparently they share a taste in clothes and men.

This line struck me as I was listening, spoken by the character Safira: Esto bushkando un fostan kolorado. Uno ke aga muncha shematá or “I’m looking for a red dress. One that makes a lot of noise.”

The Ladino word meaning “noise” has nothing to do with the Yiddish shmatte, but it had a dramatic flair.

The program also spotlighted scholars of Sephardic history. Dr. Dina Danon, assistant professor of Judaic Studies and history at SUNY-Binghamton, and author of the forthcoming “The Jews of Ottoman Izmir: A Modern History,” spoke about the Jewish community of Izmir, Turkey, the focus of her research.

“Within the Jewish historical narrative, the Jews of Izmir have suffered the same neglect as the entire eastern Sephardi diaspora during modern times, “ Danon said, “with ideologically driven approaches either dismissing it as a footnote to the supposed “glory” of medieval Sepharad, or subsuming it in larger narratives charting an inexorable decline of a static “East.”

Danon discussed the active Hebrew and Ladino presses that made Izmir a center for Jewish publishing and offered a look into the fascinating role of charity in the community.

She detailed how poverty and class were the main issues in Izmir; the presence of Jewish beggars, for instance, who spent Purim day publicly begging from dawn to night, became a communal problem. But charity work was also a social opportunity.

“Engaging in charity allowed the Jews of Izmir increased interaction with their non-Jewish neighbors,” Danon said.

Danon described a charity event — an 1883 ball celebrating the inauguration of a new building belonging to the Alliance Israélite Universelle. In attendance were many local Ottoman officials and consuls, and a special room had been prepared for the harem of the Governor General of the province, who came to the party because his sons were students at the Alliance school. (Yes, a Jewish fundraiser with room for a harem! The crowd was charmed.)

Danon said that in Izmir, moving into the middle class did not mean abandoning Judaism.

“Absent in the Islamic world was the demand that Jews abandon their religious or cultural distinctiveness,” she said. “Making a monsieur out of one’s son was fully compatible with one’s Jewishness.”

As Danon spoke, someone behind me kept saying “she’s right” and “that’s right” and “mmm-hmmm.” I turned around, hoping to get some silence so I could hear more clearly, but the older man behind me merely smiled and winked.

When Danon finished, he said — “that was really good. She really knows her stuff.”

The crowd included “Ladino celebrities” like scholars everyone seemed to know, and the children of well-known Ladino authors. Gloria Ascher, who taught a Ladino class at Tufts for many years, entertained the crowd with her stories of her experience teaching, which often included singing. She also pointed out that the impressive enrollment in her courses over seventeen years showed that there is interest in Ladino — among Sephardic Jews, Latino students, and others from all backgrounds and ages, including students Ascher’s age who wanted to learn.

On this third straight sold-out Ladino Day, everyone left with the experience of singing Ladino — and the feeling that the language may be reviving, after all. Liora Kelman, who co-authored the Ladino and Hebrew cookbook Gizar Kon Gozo(“Cooking With Pleasure”)with her mother Matilda Koen-Sarano, who is one of the most well-known Ladino writers, was visibly moved, and offered this response to the event in Hebrew: “It warms the heart to live the language of our heritage.”

Aviya Kushner is The Forward’s language columnist and the author of The Grammar of God (Spiegel & Grau) and the forthcoming “Wolf Lamb Bomb” (Orison Books). Follow her on Twitter @AviyaKushner

Why Ladino will rise again