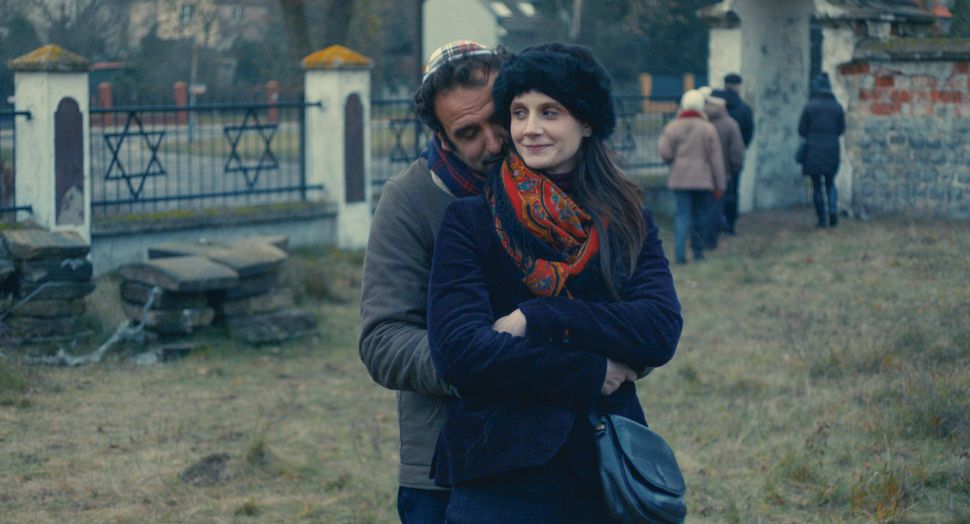 Judith Chemla and Arthur Igual star in “My Polish Honeymoon.” Image by courtesy of Menemsha Films

Kazimierz, Krakow’s Jewish quarter, was once home to thousands of Jews. Today it boasts seven intact synagogues, a rarity in Eastern Europe, and a vibrant bohemian cafe scene. In its souvenir shops, you can buy tasteful notebooks stamped with the Yiddish alphabet, Instagrammable postcards of fin-de-siècle bourgeois Jewish life, and statuettes of hook-nosed Jews holding bags of money.

A quick sweep through Kazimierz offers a crash course in the city’s contradictions — it makes Jewish history surprisingly visible, and visible in fun, upbeat ways (think deconstructed kreplach, not reconstructed boxcars) while exposing the absence of a real Jewish community. Passing through the city on a backpacking trip around Eastern Europe, I thought about buying a notebook — but those grinning figurines made me think it wasn’t quite wise to identify myself so explicitly as a Jew.

These are the contradictions with which “My Polish Honeymoon,” a wry French comedy about the pitfalls of Jewish heritage tourism, contends: the demoralizing choice between European cities that reveal no trace of their former Jewish populations and those that weave an incomplete and sanitized narrative with the apparent intention of making money and saving historical face.

Poland rarely tops anyone’s list of romantic destinations, but that’s where Anna and Adam, young parents and inhabitants of a Paris apartment much too lovely for young parents, are headed on their first post-baby jaunt. They’ve chosen — or rather, as Adam informs anyone who will listen, Anna has chosen — to visit Krakow and attend a Holocaust remembrance ceremony in Zgierz, the city where Adam’s family once lived.

“I don’t need to go there to know it’s awful,” sniffs Anna’s mother, Irene, a thorough Parisienne with no desire to remember a time before her family were cosmopolitan, assimilated city-dwellers. But in fact Anna’s enthusiasm for this pilgrimage and her interest in her husband’s origins is a reaction to her mother’s studious indifference to their own family’s Holocaust history, an insistence that returning to the erstwhile centers of Jewish life will yield a meaningful new perspective on their destruction.

Irene turns out to be right — sort of.

The action unfolds like a Woody Allen flick, recalling his lighter European rambles with its abundance of evening light and abruptly episodic structure. But while Allen’s films obey the rose-colored rule that all must eventually come right in a sufficiently cobblestoned city, “My Polish Honeymoon” is more concerned with the unresolved tensions beneath Krakow’s scrim of cultivation. At every turn, Anna and Adam confront a tourist industry that reveals itself as increasingly unseemly: Yiddish folk festivals peddled by hotel receptionists, “authentic Jewish restaurants” adorned with creepy menorahs, Disney-esque shuttles to nearby Auschwitz.

Soon, even Kazimierz’s medieval facades give way to bleak post-Soviet villages, flecked with firearms advertisements and populated by old ladies in headscarves disinclined to pore over snapshots of Anna’s grandmother or welcome her back into the fold. But instead of making the standard contrast between rehabilitated European capitals and recalcitrant rural communities, the film locates the only moment of Holocaust remembrance disquieting enough to be sincere in Zgierz. There, a local woman has researched the city’s Jews and brought together their scattered descendants for an informal ceremony. As they gather in a derelict Jewish cemetery, the guide bluntly tells Anna that during the war, many of the gravestones were used to build a terrace outside a neighboring home; the current occupant refuses to return them. 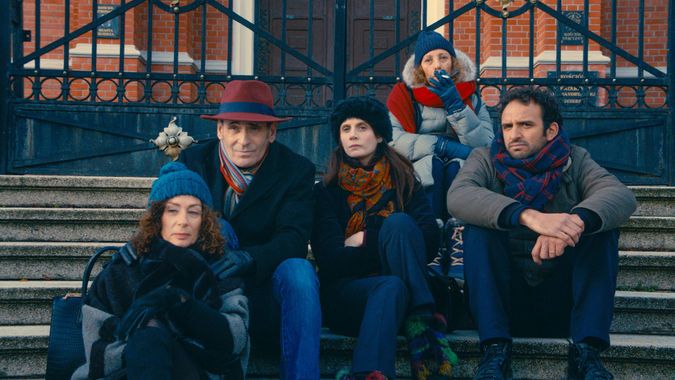 “My Polish Honeymoon” is a wry French comedy about the perils of Jewish heritage tourism. Image by courtesy of Menemsha Films

Though Elise Otzenberger, who began her career as an actress before making her directorial debut with “My Polish Honeymoon,” based the script on her own experience tracking her husband’s Polish roots, her female protagonist dips perilously into tired mid-century stereotypes of Jewish motherhood. The film’s first jokes hinge on the overbearing instructions Anna gives Irene before leaving the baby in her care: while she reads aloud lists of forbidden foods, Adam and Irene roll their eyes in chummy commiseration. It’s a running gag that Anna is too busy being a helicopter parent to enjoy a vacation or pay attention to her marriage, although it seems pretty clear that she’s compensating for her husband’s striking lack of interest in parenting (asked to comfort the baby in the middle of the night, he seems utterly surprised by the unwelcome reminder that he’s a father). A perennial giver of lecturers and foreseer of catastrophes that never come to pass (what if the remembrance ceremony is actually a neo-Nazi plot?), Anna emerges not as a flawed Jewish mother but the spectral, Rothian, Jewish Mother, buried in domestic trivialities and unable to comprehend the things that really matter.

Anna isn’t quite a plausible character, but she touches a nerve because she’s such a striking echo of the tropes that belittle Jewish women. That makes it all the more unsatisfying when the film uses her as its straw woman. As blasé about Polish history as he is about his son’s diet, Adam is appalled but sagely unsurprised by everything he sees. In contrast, Anna’s determination to find a coherent narrative in the trip makes her oblivious to the many indications that such a narrative doesn’t exist. While Adam is rightly horrified by Jewish statuettes in the souvenir shops, Anna goes into ecstasies over baby sweatshirts emblazoned with the Polish flag, unwittingly pointing out the absurdity of Jewish tourism in countries that refuse to reckon with their fraught Jewish history. Later, when she breaks down in a restaurant that serves borscht disappointingly different from her grandmother’s, she can’t even understand why she’s upset. It falls to Adam to diagnose her suppressed grief and frustration with Krakow’s shortcomings. In order to expose the vacuity of the city’s Jewish revival, the film relies on a cartoonish depiction of Anna as a naive and neurotic mother gradually adopting her husband’s wiser views.

Except that, in the end, the film’s mothers are the ones who comprehend what really matters. Despite her initial naysaying, Irene eventually hands off the baby to her husband and arrives in Poland to help Anna track down their ancestral village — where, as in Krakow and Zgierz, she finds no trace of the family history she’s seeking. So Irene makes one up, imagining how the village might once have looked, where her own mother might have cultivated a garden and baked bread and fed her chickens. The story she tells is entirely trivial, full of unimportant details, and probably fabricated. Yet it also allows Anna to envision a rich history without discounting its terrible end, providing the catharsis she’s been unable to find elsewhere. Being close to the sites of disaster doesn’t clarify the past, Anna finds, but being close to her family does. If this message is clunkily homespun, the film posits it as the only antidote to misguided and misleading histories presented in the places Jews once lived.

The New York Jewish Film Festival will screen “My Polish Honeymoon” on January 21. You can see the schedule here and watch the trailer below: