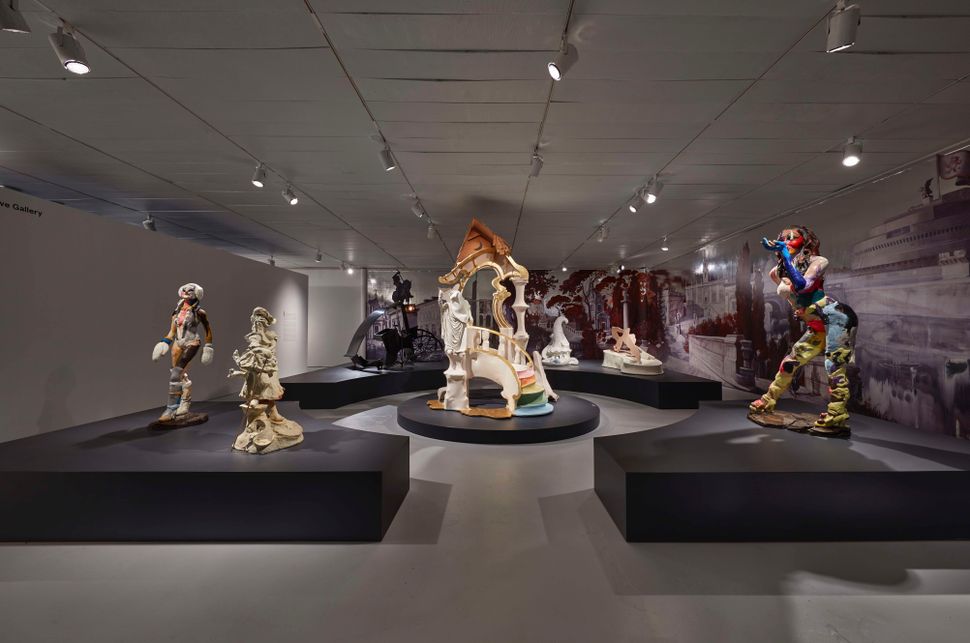 For a period of six weeks in 1994, the artist Rachel Feinstein slept in a makeshift gingerbread house on display at Exit Art, a Manhattan gallery. The performance was called “Let the Artist Live,” and Feinstein could be glimpsed, in sleeping pill-aided slumber, through the window of the house, resembling a dreamy if slightly debauched Sleeping Beauty Or, perhaps, as a helpful patron pointed out, a woman out of a John Currin painting. (In fact, Feinstein met Currin, whom she would go on to marry, when he stopped by the gallery, alerted to a girl who looked like she had escaped one of his technically accomplished, impishly perverse canvases.)

This was during the “maiden” stage of Feinstein’s life, when she bleached her hair and wore aggressive fashions, fighting against the creamy good looks of a Renaissance portrait. But even then, the themes that would preoccupy the artisgt throughout a career that by now spans three decades were manifest. These themes — the profound sacredness and the profound profanity of the body; the beauty and grotesquery of female existence; the blurry borders between comedy and tragedy; fairy tales and horror stories — are on full, triumphant view as part of “Maiden, Mother, Crone,” Feinstein’s first museum survey, now at the Jewish Museum. The show takes its title from the three progressions of a woman’s life, though it seems to me that what Feinstein actually highlights are the interstices, the in-between limbo points, as shame, abjection, and decay mingle with recovery, fertility, and wisdom. 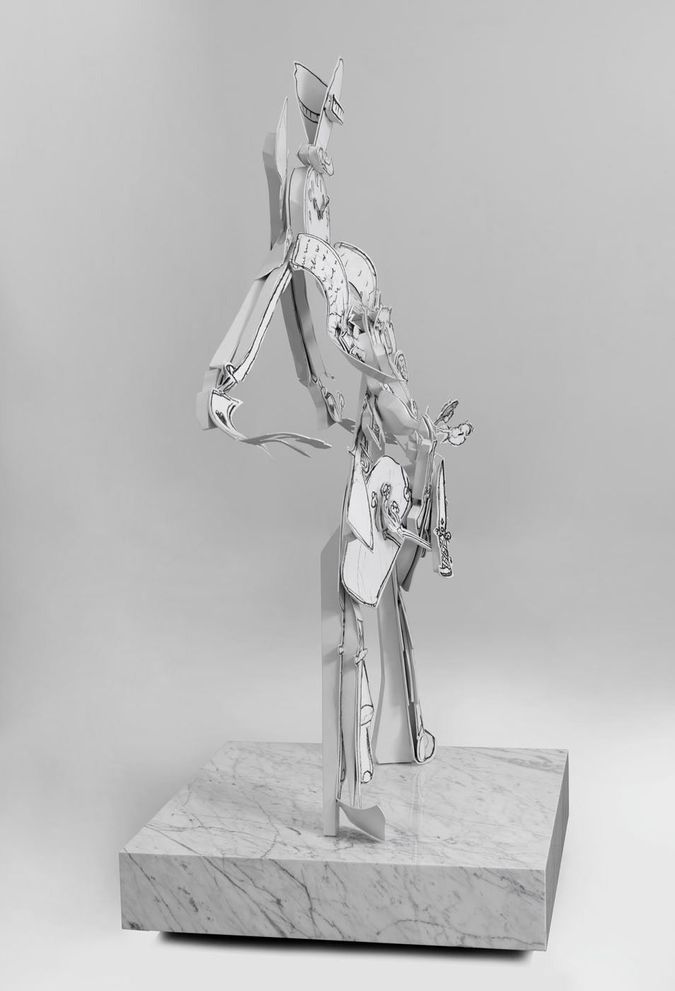 Mr. Time: This windmill-like grandee with a working clock for a face was based on a drawing made by one of Feinstein’s sons. Image by Robert McKeever

Feinstein is primarily a sculptor, though perhaps it is more accurate to say that a great deal of her work assumes, in its final form, the medium of sculpture. (A highlight of the show is the aluminum and vinyl assemblage “Mr. Time,” a windmill-like grandee with a working clock for a face, based on a drawing made by one of Feinstein’s sons. The figure carries the traces of a child’s sketch, a kind of quixotic charm, the poignancy of time’s passing and the timeless stretch of childish play.)

As an artist, Feinstein is remarkable for her ease with and use of various processes and materials, and one particularly rewarding aspect of this retrospective is the way her work is immediately recognizable as hers, the way it bears (and bares) a kind of visual signature, even while retaining its ability to continually surprise. Her technique and facility unite wide-ranging references: Feinstein studied religion and art at Columbia, but she is also fluent in fairy tales, high fashion, and the darker corners of desire. And so the museumgoer who wanders from “The Walrus Is Paul (2000),” a wood and enamel paint piece in remarkably verdant greens that suggests, on first look, the décor of a pricey nursery, is struck by the departures and echoes of “Adam and Eve (2007),” a stained wood sculpture of the abstracted biblical personages, who huddle under a conspicuously non-verdant tree in their innocence-lost Eden.

Or take the polyester resin and pigmented foam Icicles (2018), which resembles an angel (as in Victoria’s Secret Angel) afflicted by flesh-eating bacteria or a rotting zombie pinup. This recent work resonates with “Spring and Winter,” a video made between 1994 and 1996 and inspired in part by “Sun, Moon, and Talia,” Giambattista Basile’s 1634 tale that is often considered an “original” for Sleeping Beauty. In the story, a king confines his daughter to a glass coffin, hoping that preserving her in a sleeping state will keep her from developing into a fully grown, sexually available woman. Eventually, the princess is found by a knight who repeatedly rapes her sleeping form; she is awakened only when she gives birth.

‘Maiden, Mother Crone’ is a chance to rest, to start on new terms.’

In “Spring and Winter,” Feinstein films herself as three characters — versions of the maiden, the mother, and the crone — enacting the myths of a culture that is often rigidly sadistic in the representations it permits women, which is to say both in how it represents women and how it allows women to represent themselves. But the video, which operates on the principle of controlled chaos, also leaves room for lushness and playfulness. It gestures at the description I think may be most apt for Feinstein’s work: it is decadent, attuned to pleasure and indulgence, attuned to decay and degradation, attuned to their continuity, their improbable sameness.

In a recent interview with The Brooklyn Rail, Feinstein spoke of the shame and vulnerability she often felt as a woman artist and a Jewish one, about the sense, conveyed by comments like “Oh, do you have to be Jewish to show there?” that there may be something less than in having a show at the Jewish useum, as opposed to a more standard-bearing contemporary art institution, like, say, the Whitney or MOMA. But she also concluded that “Maiden, Mother, Crone” is a chance to reset, to start on new terms.

The show finally feels like a future that acknowledges that the past is never past. The installation, with its mirrors — a frequent material and motif in Feinstein’s work, an allusion to fairy tales, to the importance of representation and the fear of what is reflected — and its beautiful, panoramic wallpaper can make the visitor feel like a figurine in an opulent music box. Walking through it, I almost heard a faint melody, played on a loop. From the silence comes a tune; from the mess, something coherent emerges. The maiden anticipates the mother and the crone, and the crone carries in her a trace of the mother and the maiden. When this Sleeping Beauty woke up, she broke the glass coffin and reassembled it into something that better carries her story.