From Hungary — wild poems of Hasidic rabbis and brutal murderers 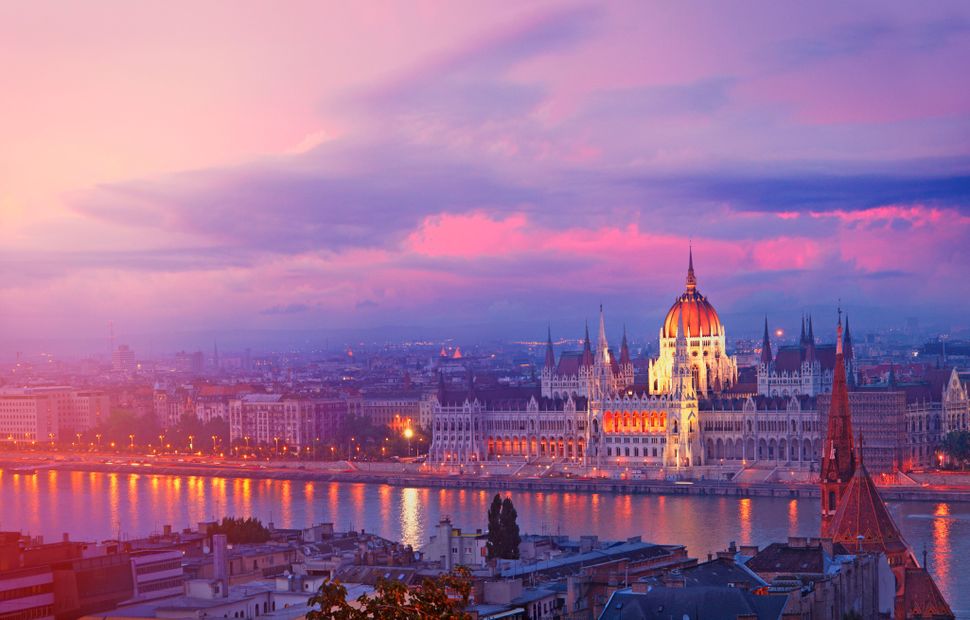 Budapest at night Image by iStock

There are very few poetry collections which grow out of a backstory like the unspeakable one which powers the major Hungarian poet Szilárd Borbély’s “Final Matters,” and which left me shaking. “At two in the morning, his father had heard noises at the front door: he opened it and was struck on the head, falling unconscious. The poet’s mother was bludgeoned to death with a meat-ax as she lay in her bed sleeping,” translator Ottilie Mulzet writes in her moving and often jaw-dropping afterword.

Mulzet, who won the 2019 National Book Award in translated literature for her translation of László Krasznahorkai’s “Baron Wenckheim’s Homecoming,” emphasizes that the gruesome murders — which took place on the night before Christmas Eve in 2000 — were not what brought these poems wide acclaim in Hungary’s literary world. Instead, it is Borbély’s transformation of the murders of his parents into a “profound meditation on death” and a deep look at the meaning of the body and the spirit across multiple traditions, that got everyone talking.

To my eye, what is most stunning here is the section titled “Hasidic Sequences,”” which address the question of the body and the soul. The poems feature three tzaddikim: Isaac Taub (1751-1821), the first Hasidic rebbe in Hungary; Moses Teitelbaum (1759-1841), also known as the Yismach Moshe, who helped bring Hasidim to Hungary; and Zvi Hirsch Hersele (1808-1874), and beautifully put them in dialogue with each other. Yes — Borbély is from Szátmar County, the former headquarters of the Satmar Hasidim. And Borbély and I have something unusual in common: we both grew up in areas important to the Satmar. Borbély hails from the place the Satmar Hasidim left, or more accurately, were exterminated out of, and I grew up in one of the homes to which the remaining Satmar fled to rebuild. 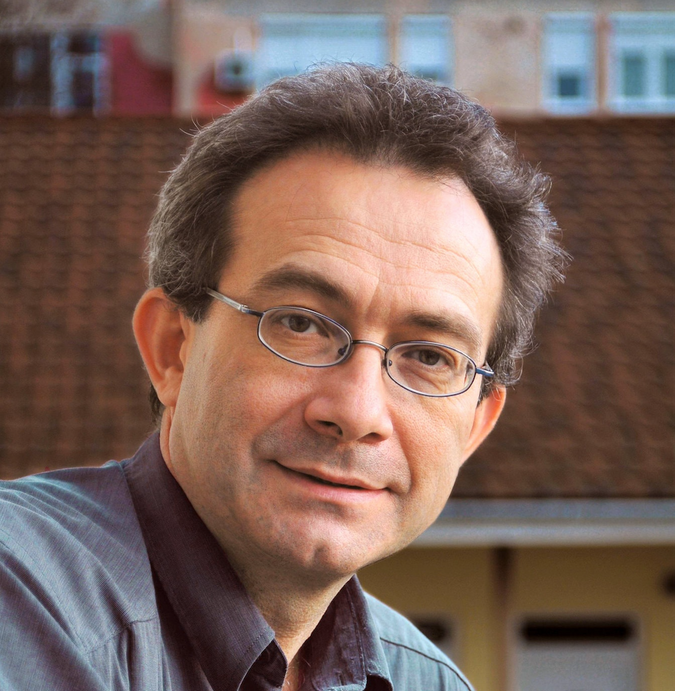 The precise part of Hungary where the Satmar originated, Szatmárnémeti, is now part of modern-day Romania, but it was part of Hungary in the crucial years of 1940-1944. Today, the Satmar — who have a strong presence in Monsey, New York, where I was raised—are the largest Hasidic sect in the world, with 100,000 followers, according to the YIVO encyclopedia. (Two of the murder victims in the Jersey City kosher supermarket shooting were Satmar Hasidim.

In Borbély’s hands, the tzaddikim have plenty to say about murder and morality — about God and man, about violence and the divine reaction, or perhaps, non-reaction, to it. Here, Rabbi Isaac Taub is imagined commenting on the most iconic murder story we have:

When Cain in his sudden rage struck Abel

down, God didn’t stay his hand”—so

taught Isaac Taub—“namely, it was the Sabbath

and he saw Abel’s shattered face,

the lamb-like meekness in his upturned eyes,

he took out his knife. Grabbed Abel’s hair and,

the blood gushed in streams, then slowly trickled

into the basin Cain had shoved there with his foot.

He wiped the blade on Abel’s hair.

God, however, did not close his eyes,

for it was Holy Sabbath Day.

Borbély focuses on what God did not do in the Cain and Abel story. It’s not just a tzaddik commenting on God’s behavior, and specifically, God’s inaction, that sets these poems apart. Mulzet writes that Borbély’s poetic contemporaries stayed away from moral pronouncements after the move to democracy in 1989, while Borbély “made this responsibility the central force of his writing.”

But the morality of these poems is not one with standard borders and clear boundaries, not one we are used to hearing. Borbély forces readers to question pre-conceived ideas of victim and tormentor, as well as ancient ideas of the body and the soul, the temporal and the eternal. These poems are immersed in both Christianity and Judaism, as well as Greek and Roman thought, and they sometimes mix the imagery of multiple — and conflicting — traditions within a single poem.

Borbély also plays with gender. A significant part of this book — which combines Borbély’s last two poetry collections, written before he took his own life — are poems from his collection “To the Body,” in which a female voice testifies to abortion, miscarriage, childbirth, and the Holocaust. In the frightening poem “Distribution” from “To the Body,” the eventual question is what a body is, anyway. This is how the poem opens:

The disturbed man chopped up the body

of the older woman for days and threw it

into garbage cans at various locations

around the city. To get rid of all the traces

is only so much blind matter, only weight,

Who are we, anyway? Even the poems that initially seem like their subject is the behavior of God, like much of the Hasidic Sequence, are really about the behavior of man. All these poems are influenced by Borbély’s personal story — not only what happened to his parents, but who they were. Borbély’s is a descendant of an illegitimate child of Jew and Fascist, a person who grew up in extreme poverty in an isolated rural part of Hungary; he is always thinking about the intersection of victim and tormentor. And while it’s possible to see these poems as an outgrowth of Borbély’s story of the murders of his parents, or as a Holocaust story, or a Hungarian story, the recent alarming rise of violent hate crimes around the world — ranging from the vandalism of Elie Wiesel’s childhood home in Hungary to a machete attack in Monsey to the mass shootings at El Paso and the Pulse nightclub — make it hard not to read and reread these as poems about the human story.

These poems challenge us to consider the connection between the human and the violent, as well as the religious and the violent — and perhaps, religion’s repeated inability to rein in the darker impulses of humanity. I felt that in the poem “Likeness,” which also raises the “who are we?” question:

They slaughtered the rabbi the way they would

a pig. Stretched his legs

into a Saint Andrew’s cross. His head facing down,

his genitals, however, pointed

upward toward heaven. They carved

his stomach in the shape of a cross,

pulled the intestines out. The butchers

were drunk, didn’t know the anatomy

of a human body, so they hacked

the flesh at random. Excrement

poured from the slaughter,

splattering onto the distorted faces.

Their nostrils trembled. They no longer

sensed anything. The crowd, grunting,

urged them on, as if they were pigs.

Hungarian society’s intentional forgetting of history — and perhaps humanity’s tendency to intentionally forget, to turn away from fact, and to refuse to face suffering, individual murder, and mass murder are the terrain of this book. As Hungary again moves toward authoritarianism, these poems seem timely as well as historical.

I happened to read “Final Matters” just after re-reading Gershom Scholem’s seminal essay collection “On Jews and Judaism in Crisis.” Interestingly, Scholem is invoked in the final pages of “Final Matters,” when Mulzet explains the concept of tzimtzum –“contraction or withdrawal into the self”—an idea which comes from Isaac Luria, known as Ha’Ari (1534-1572). Luria posited that the creation of the world began with God “contracting” his own limitless power and infinite light (ohr ein sof) so that there would be room for the less-than-omnipotent to function.

Scholem’s rendering of Luria’s idea as God’s exile into himself can be heard throughout these poems, and it seems more beautiful and more transcendent here, in Reb Teitelbaum’s imagined comments in the Hasidic Sequence:

The First Adam replenished the Universe,

and that’s why God had to flee from Eden. He withdrew

into a crevice far away. Left an empty

space between himself and Adam,

from which History was born.

The unpacking of all the complex themes in this collection, from post-1989 politics to the kabbalah and the thoughts of tzaddikim in Hungary, is a credit to both the translator and the publisher. “Final Matters” is part of the newly revived Lockert Library of Poetry in Translation at Princeton University Press, which brought transcendent poets like C.P. Cavafy, Wiszlawa Szymborksa, and the medieval Hebrew giant Shlomo Ibn Gabirol to English-language readers under the editorship of the poet Richard Howard, who held the position from 1991-2016. The new incarnation of the series is now under a stellar team of editors — MacArthur fellow Peter Cole, poet and translator of Hebrew poetry; the award-winning translator and scholar Richard Seiburth, professor emeritus of French literature at New York University; and the widely acclaimed poet, translator, and scholar Rosanna Warren, professor in the Committee on Social Thought at the University of Chicago.

In a series like the Lockert, with leading translators as editors, the translator is always a star in their field. Mulzet is an example of the new generation of “translators with a following” — translators with their own reputations, who have a record of translating world-class work. She translates from Hungarian and Mongolian, and lives in Prague. Recently, the Pulitzer Prize-winning poet Forrest Gander wrote in The Wall Street Journal that he will read anything Mulzet translates; he’s not alone.

This volume is stirring and unlike any other book I have read, and the bilingual format is important — as it preserves the original Hungarian, and fights against the trend of making it seem like all literature is written in English. The reader can easily see how the poems are laid out on the page in Hungarian, and that helps explain the translator’s decisions in visual format. The notes on the text are helpful, down to the description of epigraphs that were erased. Mulzet writes that translation “of Hungarian poetry into English has been highly influenced by Hungarian translation practices itself, in which it is considered mandatory to maintain every single aspect of the original in translation, including syllable count, meter, rhyme scheme, and so on.” I appreciate Mulzet’s claiming of a middle ground here, and her clear explanation of her efforts to render musicality and respect form without clinging to unnecessary word-by-word literalism that can read as awkwardness in English. And Mulzet has undoubtedly brought readers a great gift by bringing these multi-layered poems into English.

Still, I found myself wishing that Borbély’s biographical information and the story of his parents would come in the preface as opposed to the afterword; that would help ground readers who are coming to Borbély for the first time. This is complex, harrowing, and often sublime poetry — a cry against forgetting that deserves to be fully heard.

From Hungary — wild poems of Hasidic rabbis and brutal murderers