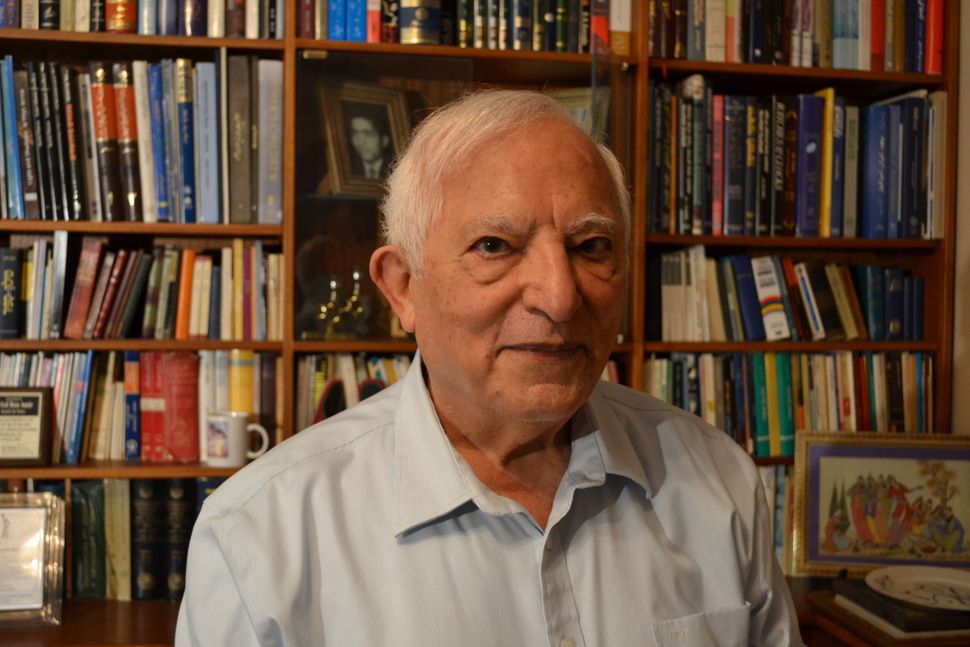 Remembering a Better Past: Amir recalls a time when Iran and Israel actually had friendly relations. Image by naomi zeveloff

In the early hours of January 3rd, the journalist Menashe Amir had been sleeping when a colleague woke him up with explosive news: an American drone had fired on the Baghdad airport, killing Iranian commander Qassem Suleimani. Amir, who is 80, rushed out of bed and into his home office in Har Adar, an Israeli settlement. For the next 20 hours he sat glued to his desk, feeding updates to the Farsi language web site he runs, “The Sound of Israel.” As the traffic racked up, Amir gave interviews to the Israeli and foreign press about the killing, which he believes was a “brilliant” move for U.S. deterrence.

For decades, Amir has held one of the most surprising jobs in Middle East journalism: he is an Israeli covering Iran for a largely Iranian audience. For most of his career, Amir ran the Farsi language program at the Voice of Israel, the country’s public radio service. After the Israel Broadcast Authority, which operated the Voice of Israel, was dismantled and replaced in 2017, Amir’s program was discontinued. (The transition was part of a government reform of public media, one that critics said Israeli Prime Minister Benjamin Netanyahu pushed forward hoping to get more favorable coverage out of IBA’s successor, the Israel Public Broadcasting Corporation.) 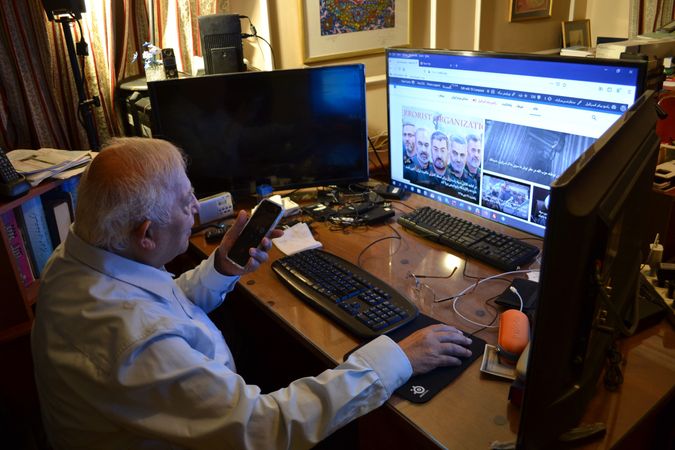 He immediately launched his website, “The Sound of Israel.” It features a daily hour-long broadcast, which is also distributed via satellite radio and a Los Angeles television station that overlays the audio with newsy video clips. Amir oversees it all from his home office, where one wall is covered with a backdrop of the Jerusalem skyline and the other is lined with Farsi books. A large photograph of Amir with George W. Bush is propped up on the floor. His wooden desk has three computer monitors; the screens are zoomed in so that Amir, who has trouble seeing, can read them.

Over his years of reporting and analysis, Amir has seen his journalism as an engine for change in Iran. He says he has aimed to impress upon his Iranian listeners the “importance of democracy.” The fact that he has waged his campaign from his adopted country of Israel — Iran’s sworn foe — makes it all the more remarkable that so many Iranians have tuned in. Amir estimates that during the Iran-Iraq war of 1980 to 1988 up to six million people in Iran were regularly listening to his broadcast.

That figure doesn’t seem implausible to Meir Javedanfar, an Iran expert who teaches at the Interdisciplinary Center, a research college in Herzliya. Javedanfar lived through that period in Iran and remembers Amir’s popularity. He says the Voice of Israel program “was associated with very precise information and analysis of the situation in Iran, which people were not getting from local news sources,” Both Javedanfar and Amir claim even Ayatollah Khomeini tuned into the Israeli broadcast.

Today, “The Sound of Israel’s” audience is much smaller. (On the day that Suleimani was killed, the web site garnered 42,900 views, the highest count yet.) To those out there listening, he says his goal is three-fold: to bring “real news” to the Iranian people, to speak against the regime’s military adventures in other countries and its extrajudicial killings, and to convince Iranians that Israel and Iran are “natural colleagues.”

It’s a position that might seem far-fetched, but Amir is old enough to remember a time when the two countries had friendly relations. Amir was eight years old when Israel was established in 1948. While the surrounding Arab countries rejected Israel, Iran was one of the only Muslim-majority countries to recognize the nascent state. In 1958, Israel sent its first ambassador to Iran. The Iranian-born Meir Ezri was famously close with the country’s last Shah, Mohammad Reza Pahlavi.

The years after Israel’s founding saw the first big wave of Iranian Jewish immigration to the Holy Land. According to social historian Lior Sternfeld, these early immigrants were motivated by Zionism and religious sentiment, but also a desire to “climb the social ladder.” Yet life in Israel could be difficult, and stories of hardship trickled back to the Jews who remained in Iran, including Amir’s parents. Amir’s father, a career soldier, provided the family with a middle class lifestyle. With roots dating back 2,700 years in Iran, the family saw no reason to relocate.

Amir, on the other hand, was intrigued by Israel. As a youngster in Tehran, he joined the Zionist club Great Cyrus, named for the Hebrew Bible’s Persian hero, who decreed that the Jews must rebuild the Jerusalem temple. Through the club, Amir met a representative of the Jewish Agency who invited him on a two-month tour of Israel. At age 17, he flew there direct from Tehran, a trip that is unthinkable today.

Amir was entranced by the young, open country and its robust journalism scene. At the time, he was already working for Tehran’s top publications, having secured his first gig by impressing an editor with his translation, from French, of an article on Rembrandt. When he returned to Iran, he met an Israeli journalist there who advised him to continue his education and career in Israel. Amir told his mother that he planned to study in an Israeli university, and promised her that he would come back to Iran after he graduated. “She gave me a suspicious look,” he said. She had good reason not to believe him. After landing in Israel in 1959, he never moved back.

In Israel, Amir attended the Hebrew University of Jerusalem, where he met her Argentine wife, Sofia Rosenfeld, and soon began to work at the Voice of Israel. (He also served in the Israeli army but he’s vague about what he did, saying only “things relating to Iran.”) According to Amir, then-Israeli Prime Minister David Ben Gurion was keen on expanding radio service’s Farsi program to sell Iranians on his planned alliance between Israel, Iran, Turkey and Ethiopia. With his language skills, journalism background and confident voice, Amir says he was a “ripe fruit” to lead the program.

In his first years at Voice of Israel, Amir reported on Israeli and Middle East news for the Iranian public. But after the 1979 Islamic revolution, his mission changed entirely. As the new regime cracked down on the press in Iran, Amir sought to fill the gap by informing Iranians about what was happening in their own country. “We reported mostly about what was going on inside Iran, news that people couldn’t get freely.”

In order to report the news, Amir cultivated a network of Iranian journalists and sources, but as with his army service, he won’t provide many details. “We had many good sources of information,” he says. “Because I was born in Iran and educated in Iran, speaking Persian and recognizing the Iranian psychology, I could read between the lines and that was very important. I knew the meaning and the consequences of events.”

The revolution quickly turned Amir into a sought-after commentator on Iran, pursued by Israeli and foreign media alike. He jokes that while the revolution impoverished many Iranians, his coverage of it provided him with the funds to build his home, a stone bungalow with Palestinian architectural touches. He decorated the interior with Persian rugs, brought over on his final trips to Iran before the revolution closed the gates to Israelis. Today Amir, now a widower, resides there with a live-in caretaker, Kathleen Saguiling. (Originally from the Philippines, she’s become an expert at Persian cooking.)

The revolution also changed his life by bringing his family to Israel. After 1979, tens of thousands of Jews left Iran then in the second big wave of immigration. Amir’s parents and seven of his eight siblings made the journey. His last remaining sister in Iran eventually moved to California.

Meanwhile, Amir continued his reporting, which was often sharply critical of the regime. Over the years, he fielded stories of his show’s popularity in Iran. Though the regime tried to jam the broadcast, he says it was never very successful. People told Amir they heard his voice in the bazaar, in taxis, and on neighborhood streets as it filtered down from apartment buildings.

Amir also heard directly from Iranians, who would call into the live broadcast through a German phone number as it was impossible to call directly to Israel. Some of these callers were hostile to Israel — one memorable one chanted “Death to Israel” — and Amir would use the confrontation to open a dialogue. “I said, ‘Ok, you said ‘Death to Israel,’ so what now?” Other callers were admiring of Israel. Their glowing words led Amir to believe that a majority of Iranians “love Israel and want peaceful cooperation between the two countries.”

Even if Amir is correct, a future of neighborly cooperation is a long way off. After the killing of Suleimani, Iran threatened to retaliate against Israel. And Israel continues to target Iran’s proxies in Syria and elsewhere. (Amir takes the hawk’s view that Iran’s military might must be destroyed — but he wants the U.S., not Israel, to do it because of the potential blowback to his adopted country.)

If there ever is cooperation between the two countries, Amir says he would jump at the opportunity to take a trip to Iran. On such a visit, he says he would have two priorities, one personal, the other professional. First, he would visit the sites from his childhood, though he says his Jewish neighborhood no longer exists. Then he would hit the streets to interview regular Iranians about their opinion of the revolution of 41 years ago. He says he already knows what they will say — that they believe it was a mistake. But he wants to hear it in their own words.

“I am very curious to hear them explain what happened,” he said.

Naomi Zeveloff is the Forward’s former Middle East correspondent and a freelance journalist based in Jaffa.