Diagnosing Anti-Semitism as a virulent disease 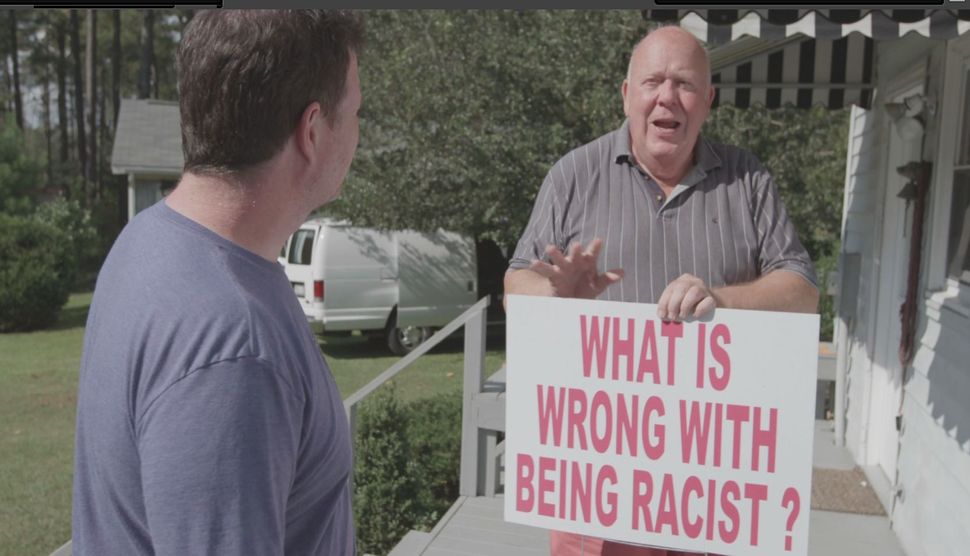 Viral: A scene from the film “Viral: Antisemitism in Four Mutations.” Image by So Much Film

Emmy Award winning documentarian Andrew Goldberg, 51, has covered many socially/historically significant topics in his films— among them, “The Armenians, A Story of Survival,” to “Proud to Serve: The Men and Women of the US Army,” to “Out in America,” to “The Iranian Americans,” — but the Jewish experience has always been close to his heart.

In “A Yiddish World Remembered,” (2002) he brought to life the Jewish world of Eastern Europe that was destroyed by the Holocaust. With “Jerusalem: Center of the World” (2009), he traced the city’s ancient origins to the present and showed how Judaism, Christianity and Islam are all rooted in that region. And in his best known film, 2009’s “Anti-Semitism in the 21st Century: The Resurgence,” he focused his lens on the rising expressions of anti-Semitism across the globe with an emphasis on the growing (and unchallenged) expressions of anti-Semitic rhetoric in the mainstream media.

“Viral: Four Mutations of Anti-Semitism,” Goldberg’s latest work, approaches anti-Semitism again, yet from a very different angle and with a renewed sense of urgency. He felt compelled to make the film because of several events that happened in rapid succession. “The 2016 election of Donald Trump, the vandalizing of Jewish cemeteries, and then the Charlottesville rally where neo-Nazis were shouting, ‘The Jews will not replace us,’” he said during a phone interview from his New York office. “That was followed by the president saying ‘There are good people on both sides.’ It was an indication to me that things were not just getting worse, but getting worse quickly.”

This project was not easy to launch or finance. The difficulty in fundraising, especially among non-Jewish foundations, which he says contributed nothing, was disheartening and revealing.

“I don’t think many people believe anti-Semitism is real,” Goldberg continued. “For many who are not Jewish anti-Semitism only comes in two forms: the Holocaust and the Tree of Life Synagogue shooting in Pittsburgh and that’s about it.”

A fast-moving, eye-opening and consistently disturbing account, “Viral: The Four Mutations of Anti-Semitism,” demonstrates how pervasive and invasive anti-Semitism really is. More to the point, as Goldberg’s evocative title spells out, it spreads like a virus and. Using archival footage, interviews with perpetrators, survivors, and such major figures as, Bill Clinton, Tony Blair and historian, author and Forward opinion columnist Deborah Lipstadt, the film considers four anti-Semitic mutations—from the far right in the United States to the far left in Great Britain (specifically as voiced by its Labor party) to Hungary’s government sanctioned anti-Semitism to the anti-Semitic expressions coming from French Islamists. The film is narrated by Juliana Margulies, and Goldberg appears throughout as an interviewer. In one of the more striking segments we see him meeting his own British cousins for the first time. His encounter with family is at once touching, humorous and informative.

During a free-wheeling conversation, Goldberg talked about contemporary anti-Semitism and by extension the issues Jews face today. 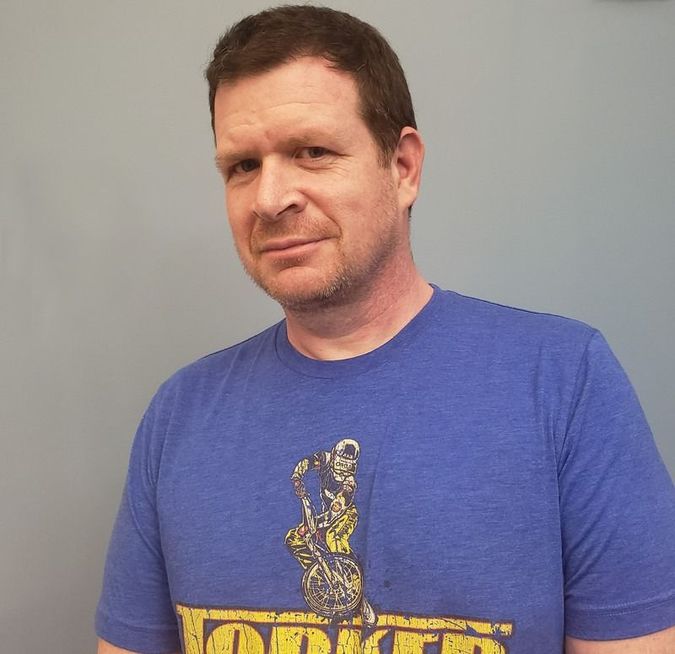 Andrew Goldberg: The director of “Viral: Antisemitism in Four Mutations” Image by So Much Film

You cover four disparate groups in your film. They are strange bedfellows, yet there’s a commonality. What views do all anti-Semites share regardless of where they’re coming from?

In the eyes of the anti-Semite, Jews have disproportionate power, wealth and undue influence. They are exempt from suffering. They come from a place of malice. What disturbs me is that when anti-Semites — even those who don’t consider themselves anti-Semites — discuss the Israeli-Palestinian conflict, for example, there is no interest in why Israel holds the position it does. I’m not saying Israel’s policies are right. I can go a long way in seeing the other side. But as a journalist I am troubled by the Jews always being cast as the oppressors, the bad actors. The notion is that Israel is a state run by Jews who, by definition, have evil intent. They are seen as the demons who seek to harm others. That’s no different from how Jews were viewed 2,000 years ago.

Do you believe you can be anti-Israeli policies and not be anti-Semitic?

You can love Israeli policies or hate them. That’s a political discussion, but if you challenge the State’s right to exist, that’s anti-Semitic. We have one woman in the film spelling it out. She says, “Israel is a crime against humanity.” And then there’s the young boy holding a sign that says “If you want world peace Israel cannot exist.” And then there’s the crowd chanting — it’s not in the movie, and maybe it should have been — “From the river to the sea, Palestinians will be free.” Incidentally, anti-Semitism was exhibited in that region before the creation of the state of Israel. The Grand Mufti of Jerusalem said he wanted to eliminate the Jewish population from that part of the world in conversation with Hitler.
I don’t think it is right for white people to say what’s racist against African-Americans. I don’t think it is right for straight people to say what’s homophobic. And I don’t think it is right for Gentiles to decide what’s anti-Semitic.

In your film’s segment on the United States you focus on anti-Semitism coming from the extreme right. Do you feel it’s more pronounced and ominous than the anti-Semitism expressed by the far left?

Yes, I do. Jewish institutions, like many synagogues across the country, have been turned on their heads, hiring all kinds of security because of threats and violent posed by the right. Anti-Semitism coming from the left is still in its adolescence. It’s not violent, but it’s growing quickly. In another generation it will be full blown.

As you present anti-Semitism in Hungary, it’s an old-fashioned right-wing anti-Semitism that has been finessed in some ways. Jews are not named, though Jewish billionaire philanthropist George Soros is presented as a national villain and without stating it directly he has become a stand-in for Jews. It’s implicitly understood, and pictures of him published in the newspapers and elsewhere border on Jewish caricature. Are there other ways anti-Semitism has mutated in Hungary?

Hungary is a bizarre, Kafkaesque world. Today, for example, some Hungarians are building monuments to figures in its past who were anti-Semitic, like Miklos Horthy. He described himself openly as an anti-Semite. What’s more, they are re-writing history to suggest Hungary was merely a victim of Germany and in no way complicit with Hitler. In actuality, Hungary was an active participant in the destruction of its Jewish population. It’s a populist, nationalist movement.

Still, Hungary is creating some of the most fascinating, original Holocaust films, “1945” or “Son of Saul,” for example.

Yes, of course. There’s a strong artistic and cosmopolitan world in Budapest that is vehemently opposed to Orban’s anti-Semitic and revisionist views. They don’t buy any of it.

As I watched the segment on French Muslim anti-Semitism I couldn’t help wondering to what degree their religious doctrine contributed to the sensibility.

Virtually all religions include some elements that are tribal and hate outsiders, but I don’t know enough about Islamism to comment on its doctrines. Still, I will say that in France there are large groups of Muslims that live in closed off communities. The government has not succeeded in bringing a number of them — and it is a minority — into integrated French society, which leads to resentment. And Jews, many of whom have done well, are natural targets. Israel of course comes into the conversation. Still, I think it’s a more of a local issue. Most Muslims in France come from North Africa, not the Mid-East. But in the end Jews once again are seen as people with undue power throughout the Muslim world. And incidentally these views were taught to them by Christian politicians, colonialists and especially missionaries who attempted to bring Christianity to the Muslims in their homelands. In teaching them Christianity they taught them anti-Semitism.

Many French Jews are terrified and moving out of the country to Israel or the United States. And there are also those who are moving out of their current communities and into neighborhoods that have more Jews and self-protection. We were stopped by volunteer security guards in one Jewish neighborhood. The guards wanted to know what we were doing there, what we wanted to photograph and why.

I was especially intrigued and disturbed by the anti-Semitism expressed by the British Labor party. How do you account for it? Once again is it Israel?

Anti-Semitism has always existed in England. Jews weren’t admitted to the golf clubs or couldn’t get beyond a certain point in their careers. In more recent decades it’s been incubating on the left. Israel is not the catalyst. It’s the accelerant. Also, the far left has gained great influence in the Labor party. It does not like the West, which represents capitalism, income inequality and materialism. The West also represents the abolishment of the welfare state, colonialism and war. And support for Israel is viewed as part of that. And then, of course, Israel is made up of Jews, who arguably cannot get along with their neighbors who are perceived as victims, while Jews are naturally seen as the oppressors.

A devil’s advocate question: do you think some Jews willfully choose to ignore anti-Semitism on the left for fear of being identified — feeling forced to identify — with conservatives or what has been dubbed “conservatives?”

That is not an issue in Great Britain. The Jewish community is outspoken in its feeling about the Labor party’s anti-Semitism. They have been abandoning the Labor party in droves. At one time the Labor party shared the values of what many Jews would describe as Tikkun Olam and it was a natural home for Jews. But that’s no longer the case.

When you approach a project like this what is your most defining identity—Jew, filmmaker, or journalist?

Always journalist. I’m not out to pound a partisan drum.

How did making the film change you or your views if it did?

I didn’t realize how bad anti-Semitism was. I now see it more clearly and in subtle ways I never anticipated. As a result I am also more keenly attuned to racism, sexism and homophobic, trans-phobic and Islamophobic responses.

Simi Horwitz is an award winning feature writer/film reviewer who won a 2018 Front Page Award from the Newswomen’s Club of New York for her Forward story, “Ruchie Freier: Hasidic Judge, American Trailblazer,” and most recently received first place prize from the Los Angeles Press Club for “Reviews-TV/Film, All Platforms,” given at the 61st Southern California Journalism Awards this past June.

Diagnosing Anti-Semitism as a virulent disease