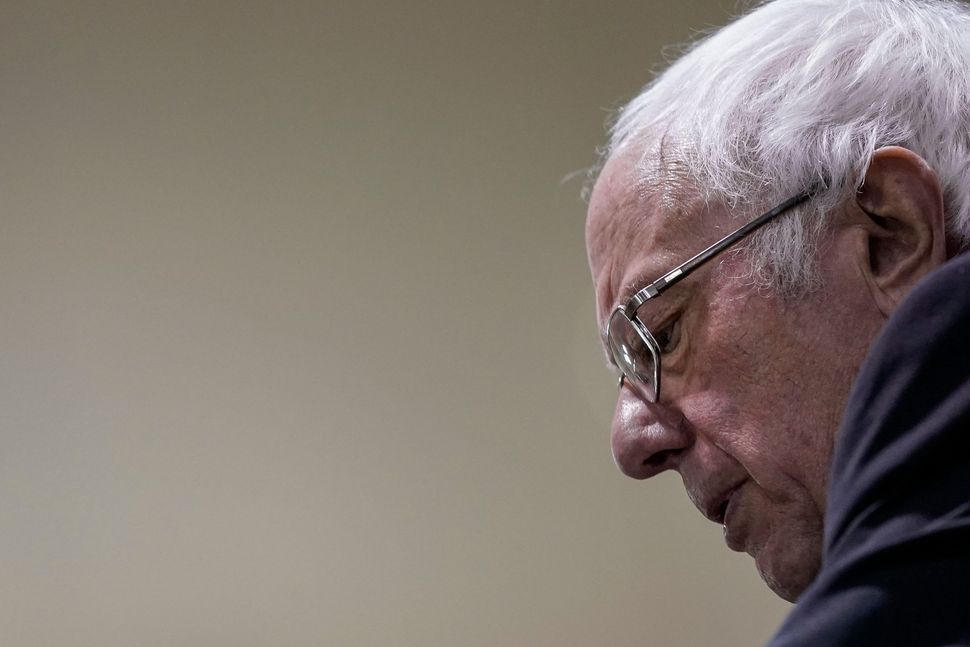 During the most recent Democratic debate, which ended with two candidates quoting a New Testament verse as their motto and one sharing that he draws a cross on his hand every day, I was left with a surprising feeling: one of the Jewish candidates on the stage actually sounded a bit Christian in both his phrasing and his overall approach.

“Here is the good news,” Bernie Sanders said, trying to walk his way back from “answering” a question on why he voted against gun control by changing the subject to Joe Biden and trade. “Because of all these disgusting and horrific mass shootings, the American people now understand we must be aggressive on gun safety.”

That was a pretty astonishing definition of “good news.”

Only a few moments earlier, moderator Norah O’Donnell directly asked Sanders: “Why did you vote repeatedly to give gun manufacturers a pass?”

“Well, you know, Joe has voted for terrible trade agreements,” Sanders responded, as some in the crowd booed.

Shaking from an unshakeable flu, I shook some more.

Was he going to answer?

Sanders eventually said: “My point was … I have cast thousands of votes, including bad votes. That was a bad vote.”

But it took too long, and it eventually led to the contention that the good news is that after so many mass shootings Americans are ready for gun reform. Since when is mass murder — or its consequences — good news of any kind?

The moderator didn’t stop, but my heart stopped.

That phrasing. The good news, from the Jewish candidate — and current front-runner — who is making large and largely immoveable percentages of Jewish voters uncomfortable, told me something I hadn’t realized before.

It’s not just the echo of “the good news” of Jesus or the Good News Bible, or the concept of an apocalypse leading to good. It’s something deeper, I thought in my flu-induced exhaustion, remembering how my doctor told me I had a responsibility to stay home for several days to avoid infecting children or the elderly.

In that long non-answer, Sanders proved that he is simply the candidate of evading responsibility.

And his response to a direct question on his record of repeatedly voting against gun control wasn’t just evasive. It wasn’t just not answering a question on life and death, as Congressional inaction on guns has undoubtedly played a role in the 36,000 Americans killed by guns each year, or 100 each day, all part of the astonishing 1.2 million Americans shot over the past decade.

It was also deeply un-Jewish.

There are many theories on why Sanders only has 11% support among Jewish Democrats, according to Pew research, from his choice of surrogates to his lavish praise of the former Soviet Union at a time when refuseniks were rotting in jails.

But listening to Sanders at the debate, I realized it’s not just about what Sanders says, but what he doesn’t say.

A discomfort with evasiveness is arguably the essence of Judaism. At its root, Judaism is not about living on a kibbutz for a couple of months a couple of decades ago. Judaism also has nothing to do with being “proud to be Jewish” — as Sanders frequently declares — or running ads with a montage of recent anti-Semitic incidents.

Instead, at its core, Judaism is just this: personal responsibility.

That’s Yom Kippur: a litany of your deeds and misdeeds, a facing of yourself. Listening to Sanders evade details, continually not provide actual numbers for his plans, and make any question about “billionaires,” I thought of novelist Dara Horn’s memorable reaction, in The Atlantic, to the Auschwitz exhibit at the Museum of Jewish Heritage, and in particular, her reaction to the exhibit’s attempt to find a “message” from the “final solution”:

The Holocaust didn’t happen because of a lack of love. It happened because entire societies abdicated responsibility for their own problems, and instead blamed them on the people who represented—have always represented, since they first introduced the idea of commandedness to the world — the thing they were most afraid of: responsibility.

There’s a philosophy behind the cycle of responsibility and repentance embedded into the Jewish calendar, culminating in Yom Kippur, and the insistence that we are responsible for our own actions. It’s the idea that the most dangerous people are those who can’t face themselves — who can’t directly, honestly, and clearly own up to what they did do, what they didn’t do, and why.

Not being able to face your own behavior is not that far from blaming someone else, often with disastrous consequences.

It’s too bad that Sanders is getting a pass on his numerous votes against gun control, and so much else, and that his non-answers are becoming accepted as answers.

The Sanders votes on guns are the kinds of votes that should bring on an al chet, or on this sin, at Yom Kippur. That an outrageous statement like framing mass shootings as “good news” is uttered on a national debate stage — and then not challenged by others — is an example of how dangerous and corrosive a model of non-responsibility can be. And how attractive it is and has always been.

Jews know that too well. Non-responsibility is popular, and it has a long and bloody history. But it’s usually not “good news.”