When Native Americans were the lost tribes of Israel 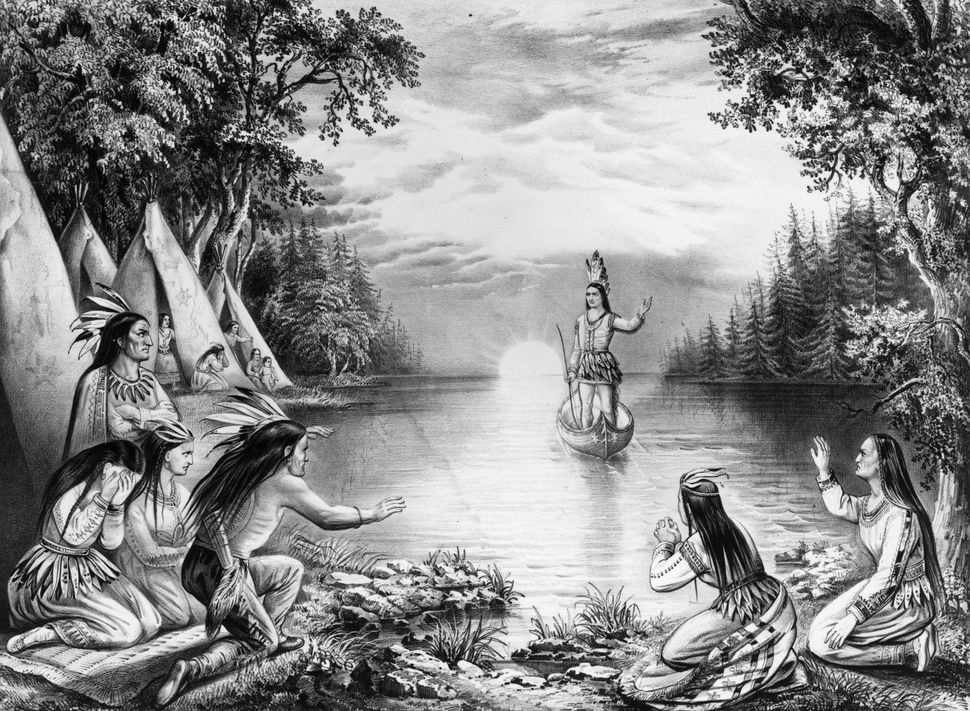 Hiawatha’s Departure: Legendary chieftain Hiawatha, subject of Henry Wadsworth Longfellow’s epic poem departs down the river to the dismay of all. Hiawatha, a Mohawk who lived among the Onondagas is remembered as the bringer of peace to the warring Iroquois tribes. Image by Getty Images

Old Canaan in a New World

When I lived in West Jerusalem, I regularly walked past a large poster which featured a Native American man. He was wearing traditional clothing and a feathered war bonnet, and the caption said, “Ask me about land for peace.” Nothing could be more incongruous with its surroundings, which is to say, in a city built largely from foreigners’ fantasies, nothing made more sense. Even the image’s politics were hard to parse. If Israeli Jews gave up the West Bank, it suggested, they would only be victimized further and eventually suffer the fate of the Native Americans. But who could be so right-wing as to miss the absurdity of the analogy, in which Israel is a reservation and the indigenous, beleaguered Palestinians are the white colonizers? Moreover, the poster’s language falsified its claim to its indigeneity. It seems overwhelmingly likely that American immigrants had imported this image, iconic in American culture — and regardless of where it came from, it was surely made for Anglos’ benefit. But in some sense, none of that mattered. The potent myth of the “Vanishing Indian,” and the subconscious suspicion that somehow, in some way, he had something to do with the Jew, had, the constraints of logic and good taste notwithstanding, burst forth like water from a rock.

The imagined affinity between Jews and Native Americans is the subject of Elizabeth Fenton’s new book, “Old Canaan in a New World: Americans and the Lost Tribes of Israel.” She tells the story of what she calls the “Hebraic Indian” theory: the hypothesis, which Europeans invented upon arriving in the Americas, that the people they met there were actually the lost tribes of Israel. According to the Bible, after the Assyrians sacked the Northern Kingdom of Israel, its ten tribes were exiled. Centuries later, the Jewish historian Josephus cryptically reported that they were flourishing “beyond the Euphrates” as “an immense multitude.” Exiled from history, they became a legend, whose return would herald the messianic age. A millennium and a half later, the lost tribes myth conveniently answered one of the New World’s most vexing problems: who were its inhabitants, and from where could they possibly have come? The lost tribes and indigenous Americans made a convenient couple, at least for confused Europeans: a history without real people for real people without a history.

This coupling, as Fenton demonstrates, has had a deep purchase on white attempts to imagine Native Americans. Her book does not tell a continuous, narrative history, instead examining representative texts in the history of the Hebraic Indian theory. James Adair’s 1775 “History of the American Indians,” for instance, provides a massive collection of anthropological, linguistic, and historical reports about Native Americans. Scholars still mine Adair’s book today, in part because, as Fenton notes, he typically “treats the cultures he describes with respect.” Yet he wrote it to prove that Native Americans were Jews, and in support of this claim he marshals an array of absurd evidence. Adair thought, for instance, that both Hebrews and Native peoples forced menstruating women into small huts for what he called “lunar retreats.” He also drew linguistic connections so tenuous they would make a Hasidic preacher grimace: the Muskohge, for instance, reportedly called blasphemers “Yah-yah Algheh,” which sounded to Adair like the Hebrew name of God, which he rendered “Yohewah… Elohim.” Adair filtered all his carefully reported ethnographic details through this ludicrous frame. As carefully as he studied Native Americans, he was constantly casting them as minor actors in a biblical drama, never seeing them on their own terms. 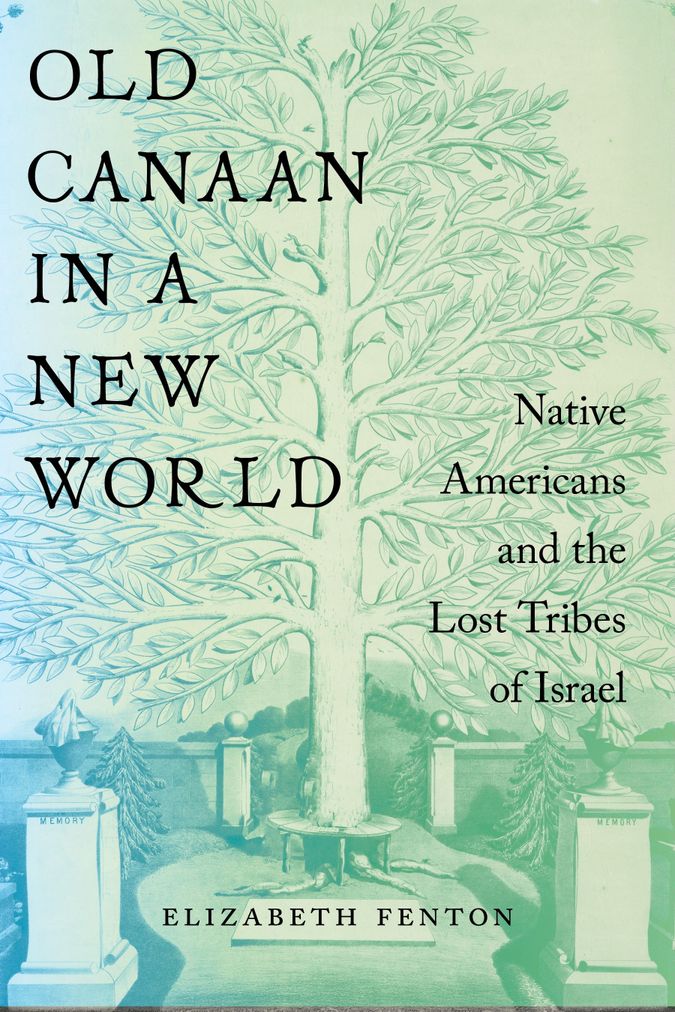 Old Canaan in a New World: Native Americans and the Lost Tribes of Israel, by Elizabeth Fenton Image by Courtesy of NYU Press

White Europeans have never encountered the New World as wholly new; rather, Fenton writes, Adair saw American as “an old world, playing out an old history.” Or perhaps more precisely, he saw it as an old new land, an intoxicating mixture of the ancient and the exotic. For the “Hebraic Indian” offered not just a tool for linking present and past, but also a way of imagining improbable American futures. Manuel Mordecai Noah, for instance, an antebellum Jew who led a colorful life (he was the American ambassador to Tunis, wrote plays, and fought several duels), was inspired by Adair to imagine reunifying the Jewish people — including the “lost tribes of Israel” who, he wrote, “were the ancestors of the Indians of the America continent” — on Grand Isle, outside Buffalo, New York. He laid the cornerstone for this new Jerusalem, which he named “Ararat” after the mountain on which Noah’s ark rested, wearing a “borrowed costume from a Shakespeare production, and accompanied by a band playing the march from Handel’s “Judas Maccabeus.” Noah’s theatricalized fantasy of an ingathering of Jewish exiles and a reconciliation with their estranged Native brethren offers a bizarre foretaste of political Zionism (in addition to Buffalo, he investigated colonizing Syria): this is Israel, not as nation-state but as burlesque.

As Noah’s appropriation of Adair suggests, the fantasy of the Hebraic Indian has unpredictable politics, because it mixes utopianism, imperialism and pure zaniness. (The weirdness intensified over time, as the thesis came to seem less probable. By the end of the nineteenth century, its advocates were increasingly locating the lost tribes not in the Americas, but inside a hollow earth.) Fenton repeatedly emphasizes the idea’s connection to American colonialism. Its messianic promise provided English Christians a theological rationale for settlement, and traditional anti-Jewish beliefs were mobilized to justify mistreatment of Native peoples. At its core, the theory represents a willful ignorance of indigenous people’s difference, of their right to their own history and story. And yet the Hebraic Indian could also become a tool of critique. The Pequot convert to Methodism William Apess, for instance, defended the theory in his classic autobiography “A Son of the Forest.” Apess was a staunch advocate of indigenous rights, who helped organize a revolt by the Mashpee people on Cape Cod. Fenton argues he uses Hebraic Indian theory as an “impossible historical trajectory,” one which disrupts and confused the straightforward, linear narrative of European triumph and native displacement.

Overall, the appeal of Fenton’s book lies mostly in its materials, which are fascinating. But I am not sure what the principle of selection is in her choice of which texts to discuss: why this piece of Hebraic Indian theory and not that one? Neither a single story nor a sharp, clear argument unify the book, and in their absence, tangents sprout like weeds: an explanation of hollow-earth theories which could be cut to a few sentences, an overlong excursus on the history of bees in America. And the writing can be clumsy: there are long patches of flyspecking texts, picking over their small details for reasons that remain obscure. Moreover, Fenton incessantly notes her subjects’ mistakes in reasoning and colonialist prejudices — both of which are perfectly obvious — as if she were anxious we would associate her with the people about whom she is writing.

Nevertheless, I remain haunted by “Old Canaan in a New World.” The detail that sticks with me is this: a book entitled “Jews in America” was published by a Presbyterian minister in 1650, dedicated to proving that “Indians are Judaicial.” The strange fact that the first study of American Jews was actually about indigenous people warrants contemplation. Jews often contrast the United States’ open-minded tolerance toward us with Europe’s inherited prejudice, yet Fenton’s books shows that we could never have arrived in America with a blank slate. Rather, no less than native Americans, American Jews have also been acting in someone else’s drama: scripts about civilized modernity and primitive, barbaric rituals; the pressures to assimilate into a white, Christian society; and the lingering fear that national weakness will result in collective erasure.

A great deal of American Jews’ behavior, I am suggesting, is explicable as our frantic attempt to distance ourselves from the Indians America has always known us to be. As that poster in Jerusalem suggests, “genocide” for American Jews means not only our Holocaust, but also the half-forgotten, vague, and devastating trauma particular to this continent. And American Zionism means not only the desire to be a nation like other nations, but also to be a tribe unlike the other tribes. As American Jews find themselves less comfortable in America and with Israel, we might pay more attention to the darker, colonial undersides to both our Americanism and our Zionism. We might think more carefully, in other words, about what it means that you cannot tell our history without also telling that of Native Americans.

When Native Americans were the lost tribes of Israel