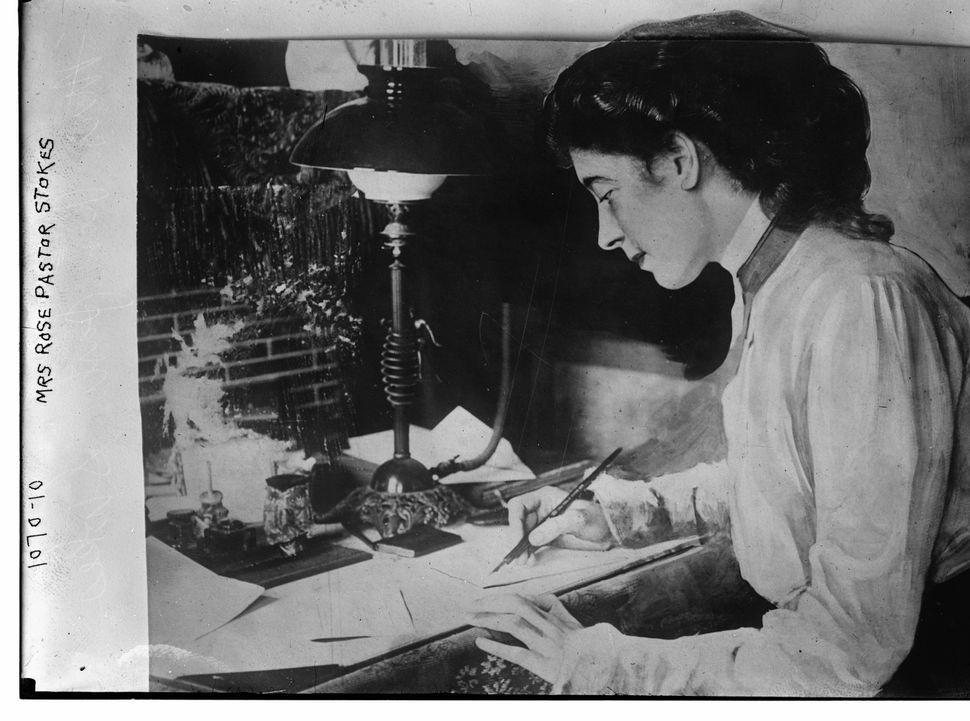 Rose Pastor Stokes at her writing desk. Image by Library of Congress/Wikimedia Commons

It’s tempting to think, as the 2020 election unfolds, that we’re living through the great American confrontation of capitalism and socialism.

Has there ever been a figure who more compellingly captured the American socialist dream than Bernie Sanders? Has such a figure ever faced quite so dramatically unscrupulous a capitalist establishment?

If you’ve never heard of Rose Pastor Stokes, you’re in for a ride. Born Raisel Wieslander in a distant corner of Russia in 1879, Pastor Stokes was only two when, in the wake of a wave of pogroms, her divorced mother, Hindl, took her and fled their hometown. The duo made their way across Europe and briefly settled in London, where Hindl remarried to a man named Israel Pastor. Raisel Wiselander became Rose Pastor, and the new family made their way to Cleveland, where, as Hindl had several more children and her husband sank into alcoholism, Pastor Stokes became the her family’s primary breadwinner, starting work in the local cigar factories at age 11.

So far, so normal an immigrant narrative. And then: Pastor Stokes wrote a letter to a newspaper in New York City, the Yiddishes Tageblatt. The paper’s editor, impressed with her writing, offered her a regular column giving advice to young women. (Years later, she would serve the same function at the Forverts as an anonymous author of the paper’s famous advice column, the Bintel Brief.) When she quit, unable to balance the work with her long hours at the factories, the editor offered her a modestly well-paid staff job in New York. She moved, eventually bringing her family after her.

Then she was sent to interview James Graham Phelps Stokes.

He was the favored son of one of the wealthiest families in America. Their summer home had 100 rooms; it was the largest private residence in America. He was as upper crust as you could get without literally being an Astor.

And he and Rose Pastor — an uneducated, immigrant, tenement-dwelling Jew — fell in love.

In 1905, against the objections of his family, they married. But, as Adam Hochschild’s new biography “Rebel Cinderella: From Rags to Riches to Radical, the Epic Journey of Rose Pastor Stokes” makes quite clear, that astonishing class leap wasn’t really what made Pastor Stokes remarkable. It was what she did with it. Patrician husband by her side — at least at the start — she became one of the country’s most outspoken and effective advocates for socialism and organized labor. It was as startling a turnaround as possible: Imagine if Prince Harry and Meghan Markle, rather than delicately stepping back from the monarchy, suddenly started getting arrested on picket lines while shouting about the need for workers to own the means of production. (Who knows — they still might.)

Of course, for socialists as for others, fairy tales aren’t real. While both Pastor Stokes and her husband, who tended to forgo his many names in favor of the simpler Graham Stokes, entered their marriage with relatively conventional ideas about their roles, she quickly outpaced him. As a public figure he was too stiff to be stirring. She, on the other hand, was sensational, able to appeal, often speaking without notes, to almost any audience. Hochschild records her, at a fundraiser for beleaguered Socialist presidential candidate Eugene V. Debs, convincing the women in the crowd to donate the fine jewelry they were wearing at that moment to his campaign. But beyond the issue of Pastor Stokes’ greater appeal in the public eye, it turned out, over the years, that her husband could only stretch the politics of his class so far. While Pastor Stokes, whom Stokes called “Girlie” throughout their marriage, became more and more radical — Hochschild’s book opens with her starting a 1916 riot at Carnegie Hall by illegally handing out information on birth control from the stage — he slowly returned to his family’s conservatism.

Their definitive political split happened around World War I. He became an ardent supporter of the military; she was indicted for anti-war sedition and sentenced to 10 years in prison, a verdict that was eventually reversed without her serving time. (A clear sign of their separation: When charges were announced against her while she was in Kansas, he telegraphed her to urge caution. “Your message misdirected dear,” she wrote back. “Send it to Jingo Capitalist Press.”) Of course the marriage ended, although it would take nearly another decade for it to formally dissolve. In that time, both partners took regrettable political turns. Pastor Stokes became a militant supporter of the newly-fledged Soviet Union, hewing to a romanticized ideal of it even after her friends and colleagues, among them Debs and Emma Goldman, became clear-eyed about its fatal flaws. And Stokes, who through the war informed on those he wrongly imagined to be German spies, devoted himself to creating an image of himself as a military hero, citing his almost entirely useless intelligence gathering as crucial to the Allied victory. He was back in the fold: His principal political interest had become his own elevated status.

“The chasm between rich and poor in our second Gilded Age makes it painfully clear that much of what Rose fought for remains to be achieved,” Hochschild writes in the book’s final chapter. But it’s not just our ongoing economic battles, so similar to those of a century ago, that make the book’s narrative ring familiar. Lying beneath the story of “Rebel Cinderella” is a deeply American kind of despair, one rooted in the paradox of living in a place that preaches grand idealism while proving, time and again, to have an overwhelming interest in preserving the status quo. Although Pastor Stokes died of cancer in 1933 at age 54, the story of her activism is unhappily modern. She yearned for a better country, both for the workers she championed and for herself. But for all her accomplishments, the country, with its fanatic fixation on wealth and power, remained largely the same. Rose Pastor Stokes and Graham Stokes both calcified as they aged, adopting rigid ideas about the world that simultaneously precluded the experience of a nuanced life and embodied a deep yearning for it. In their increasing narrowness was not only desperation about the prospect of national change, but also a desperation to find value in lives that, despite fame and fortune, had been steadily chipped away at by the American machine.

Unlike many of us, before she turned to her late political foibles Pastor Stokes had a uniquely clear sense of just why the American public felt so perpetually diminished. The country, as she diagnosed it, lacked a real ethical center. It needed a framework that would ground each life and give it room to grow. In 2020, nearly a century after she retreated from public life, that errand seems as unachievable and as necessary as ever. Yet even with my modern resignation, as I read “Rebel Cinderella” I — like the workers and society ladies and churchgoers and forlorn immigrant girls whom Pastor Stokes counseled — found myself caught up in her vigor and determination. I read through her improbable accomplishments and felt a brief and extraordinary hope. Still, in the end, I grieved.