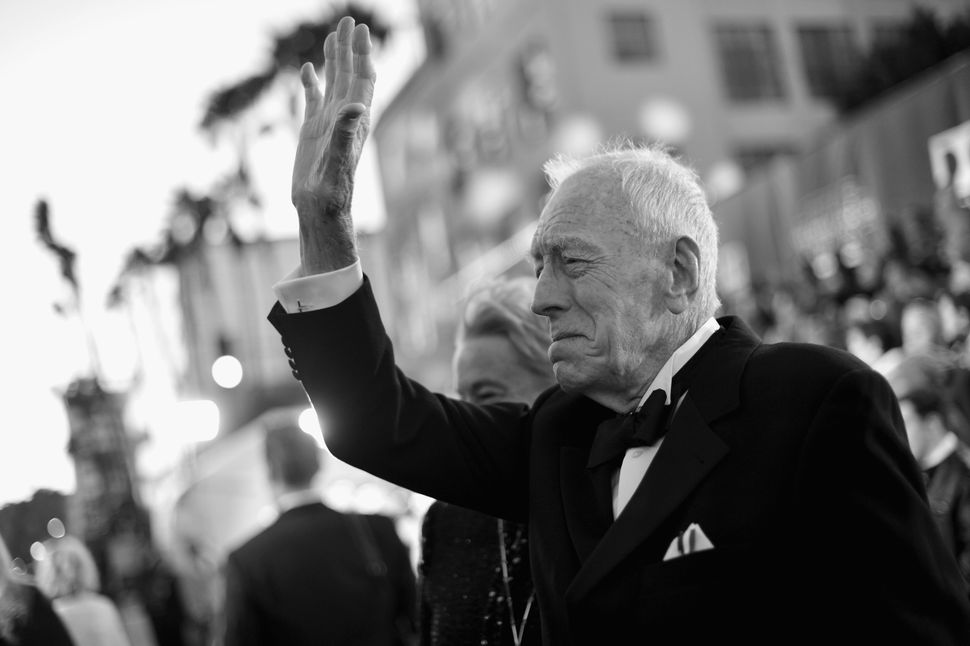 Actor Max von Sydow was not Jewish or German, and yet, through much of his English-language film career he played Holocaust survivors or Nazis.

A favorite of Ingmar Bergman, the Swedish performer, who died March 8 at the age of 90, was a presence in film from his time in “The Seventh Seal” and “The Exorcist” to recent wizened turns in “Game of Thrones” and “Star Wars: The Force Awakens.” But before Bergman discovered him, von Sydow cut his teeth performing for Jewish survivors in his home town of Lund.

In 2012, von Sydow recalled how when he was 16, Lund took in displaced Jews at refugee camps. The locals gave the survivors food and clothing, and von Sydow, with a folk dance troupe, provided entertainment.

“These poor people came and were staying at whatever was available, in the schools, and in the big bathhouse, and we spent our weekends touring and dancing for them — something I will never forget, because it was very emotional,” von Sydow told the Jewish Journal. “Some were carried in on stretchers to watch the shows; for many, it was their first entertainment after the hell of the camps.”

Von Sydow and his company sang the national anthems of the survivors’ home countries, giving them comfort before many of them passed away.

“These were people, many of whom were gravely ill, who came and spent perhaps a couple of weeks in our town before they died,” von Sydow said. “We were just trying to do as much as was possible for them at the time. Many of them are still in Lund, in a huge graveyard with foreign names.”

Years later, von Sydow’s talents would be used to tell the story of survivors their tormentors, and their would-be saviors.

In 1976’s “The Voyage of the Damned,” he played Gustav Schröder, the captain of the MS St. Louis, the ship that transported Jewish refugees out of Germany, only to be rerouted back to Europe, where many of the passengers ended up murdered in death camps. He also took on the role of a Jewish survivor in 2001’s “Intacto” and 2007’s “Emotional Arithmetic,” Otto Frank in a 1967 TV film of “The Diary of Anne Frank” and the Jewish White House Counsel Samuel Rosenman in the TV miniseries “Nuremberg.” Of course, he also played a Nazi — if ambiguously — in 2010’s “Shutter Island.”

While he often was frocked as priests, vicars and anti-Semitic writers like Knut Hamsun and August Strindberg, he also embodied Jewish novelists, musicians, Sigmund Freud and King David and made his Hollywood debut as the most famous Jew of all, Jesus Christ, in “The Greatest Story Ever Told.”

He may be best known to film buffs for his work with Bergman or his many appearances in Sci-Fi and genre films like “Dune.” Von Sydow was also a staple of horror flicks like the “Exorcist” films and “Needful Things,” but he learned an actor’s lesson in empathy by encountering survivors of a real horror.

“I was naïve, and of course I did not understand the profundity of the tragedy,” von Sydow said of his time performing for the refugees. “But that spring, when these people were sent to us, to hopefully survive, made a very deep impression on me.”