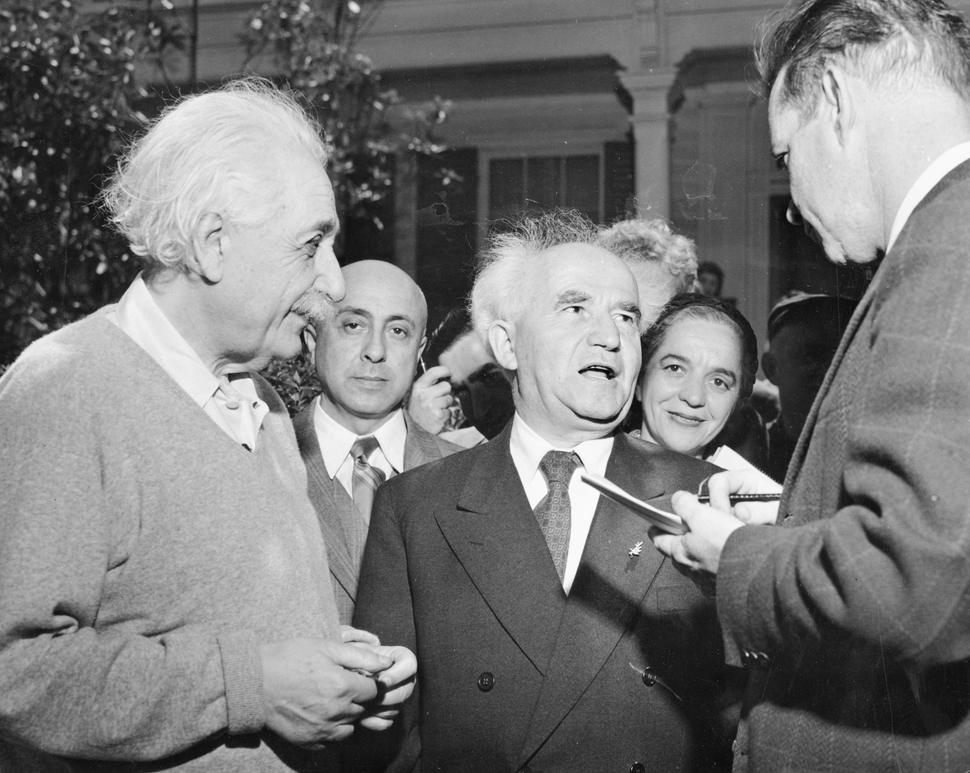 Editor’s Note: This article was originally published on November 22, 2015, the 100th anniversary.

Is any name more synonymous with Jewish genius than Albert Einstein?

By speaking out against anti-Semitism and lending his brand to institutions like the Albert Einstein College of Medicine, Einstein became a standard-bearer for the Diaspora.

As a prominent booster of The Hebrew University of Jerusalem and a star fundraiser for the Zionist cause, he became inextricably linked with Zionism.

But Einstein’s relationship to Judaism and to the Jewish state is complex.

Steven Gimbel, a professor of philosophy at Gettysburg College, says that it is easy for diverse and sometimes opposing groups — Zionists and anti-Zionists, atheists and religious Jews — to claim Einstein as their own.

They have good reason to do so, too.

“If the smartest man in history agrees with me,” so the thinking goes according to Gimbel, who has written two books on Einstein, “then my view must be that smart.”

But dig a little deeper, and the complexity of Einstein’s views is quickly revealed.

Einstein disdained divine revelation, yet he believed in God.

He recoiled from Orthodox Judaism, but he felt a deep kinship with the Jewish people.

He opposed the idea of a Jewish state, yet raised money for the Zionist cause and was invited to become president of Israel.

“Einstein is such a multidimensional personality, such a multidimensional phenomenon, that everybody can adopt something and cling on to it,” said Hanoch Gutfreund, head of the Albert Einstein Archives at the Hebrew University. Einstein’s views on what it is to be a Jew were shaped as much by the way others perceived him as they were by his perception of himself.

He may have rejected Judaic practices and felt alienated from what he described as Germany’s “Jewish bourgeois circles,” but as a revolutionary and outspoken Jewish scientist, a pacifist and an internationalist, he was pilloried by many of his German peers in the 1920s and ’30s for his “Jewish science.”

Einstein recoiled from nationalism. But his personal experience of anti-Semitism and his witnessing of anti-Semitic attacks on his European Jewish peers convinced him that Jews needed a homeland in Palestine.

“Until the end of his life he defended” his Zionist instinct, Gutfreund said. Einstein maintained that he was always a “cosmopolitan, but this nationalism is forced upon us and… it’s a necessity.”

Einstein was born in Ulm, an industrial German city, in 1879.

He flirted with Judaism in his youth, annoying his secular parents by demanding that they keep a kosher home.

But his views changed when he was about 12, thanks to Max Talmud, a Lithuanian-Jewish medical student who was invited to the Einstein household for dinner each week.

Talmud hooked Einstein on science books that sparked his rejection of religion.

Einstein’s uncoupling from religious Judaism was matched by his rejection of his nationality.

He hated what he perceived as the militarism of Kaiser Wilhelm II’s Germany.

After his family moved to Switzerland, Einstein, at the age of 17, renounced his German citizenship.

As if to underline his rejection of everything he was born into, the papers renouncing Einstein’s citizenship listed his religious affiliation as none. A decade later, when Einstein was forced to list a religious belief in his application for an academic post in Prague, he wrote, perhaps begrudgingly, “Mosaic.”

Einstein may have rejected Judaism, but he could not reject the way others perceived him as Jewish. Even as his star grew in Europe following the publication in 1905 of his theory of special relativity and of his famous equation — E = mc 2 — Einstein still felt held back as a Jew.

He suspected that he was passed over for the position at the University of Prague in 1910 because of anti-Semitism.

After he moved to Berlin in 1914, his science was attacked not just on its merits but also on the author’s Jewish background. In 1920, a group of nationalists formed the Study Group of German Scientists for the Preservation of a Pure Science. Their first target was Einstein’s general theory of relativity, published in 1915, which Nobel laureate Philipp Lenard disparaged as being infected with an “alien spirit.”

As hyperinflation took hold in 1921 and unemployment rose, more people casting around for a scapegoat focused on Jews.

Einstein did not try to assimilate like other German Jews such as Walther Rathenau, Germany’s foreign minister who was assassinated by nationalists in 1922, or chemist Fritz Haber, a convert to Christianity who developed chemical weapons for Germany during World War I.

Following the rise of the Nazi Party, Haber had to leave Germany; he died in exile in 1934 in Switzerland. As National Socialism spread in Germany, the atmosphere for Jews grew toxic. At one point, the police warned Einstein that nationalists were targeting him for assassination.

These developments helped Einstein overcome his misgivings about the Zionist project.

In 1921 he embarked on a two-month tour of America to raise money for the World Zionist Organization and, in particular, for the building of the Hebrew University.

Einstein believed that the Hebrew University, which was founded in 1918, would be a beacon to the world, devoted to the pursuit of Jewish values of justice and human dignity.

It was Einstein’s first trip to America, and everywhere he went he was mobbed as a scientific superstar and, as Walter Isaacson described in his biography of Einstein, as “a living patron saint for Jews.”

That trip was followed one year later by Einstein’s first and only visit to Palestine. Although Einstein was dismissive of the Orthodox Jews he saw praying at the Western Wall, he was inspired by the sight of industrious, secular Jews laying the foundation for a nation.

During a stop in Jerusalem, he told a Zionist crowd, “Today, I have been made happy by the sight of the Jewish people learning to recognize themselves and to make themselves recognized as a force in the world.”

But Einstein’s support for the Zionist dream was not straightforward.

World Zionist Organization leaders kept minders on hand during Einstein’s trips to America and Palestine lest he say something out of turn. Right up until the founding of the State of Israel, in 1948, Einstein spoke out against the idea of a Jewish state. Einstein’s vision of a Middle Eastern nation that welcomed Jews would look more like the binational state that so many Jews today fear rather than the two-state solution so many people crave. 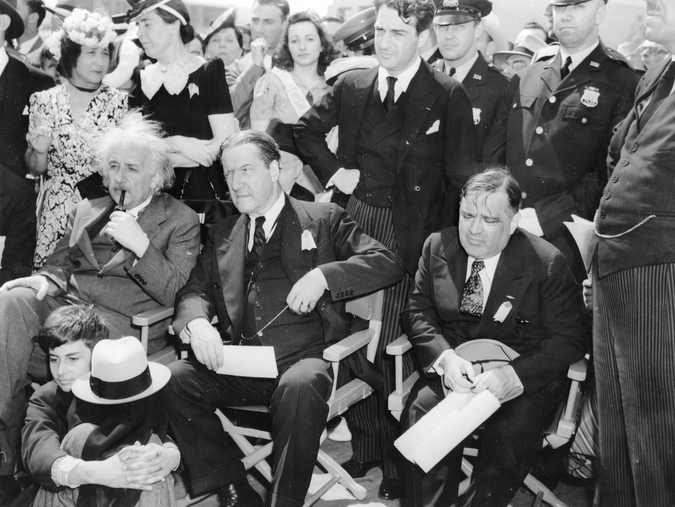 As Isaacson notes in his biography, Einstein feared that the influx of Jews to Palestine during the 1920s could lead to friction with Palestinian Arabs. In 1929 he told the Zionist leader Chaim Weizmann that if Jews could not coexist peacefully with Arabs, “then we have learned absolutely nothing during our 2,000 years of suffering.”

Even in 1946, when the horrors of the Holocaust were still raw, Einstein’s views were unchanged.

In an interview with the Forverts, Einstein warned that a “Jewish commonwealth” where a majority of the population is Arab would be “unjust and impractical.” Testifying in Washington that same year to an international committee examining the Palestine question, Einstein said, “The state idea is not in my heart.”

If Einstein’s opposition to a Jewish state was disappointing for Zionists, then his religious views disappointed religious Jews as well as atheists.

Einstein’s view of God mirrors most closely that of Baruch Spinoza, the 17th-century Dutch philosopher who was excommunicated from the Jewish community at the age of 23.

Einstein, like Spinoza, did not believe in a personal God who cares about what humans do. Instead, Einstein marveled at the majesty and complexity of the universe, which he believed could be attributed only to some higher power. “The most beautiful emotion we can experience is the mysterious,” Einstein wrote in 1930. “It is the fundamental emotion that stands at the cradle of all true art and science. He to whom this emotion is a stranger, who can no longer wonder and stand rapt in awe, is as good as dead, a snuffed-out candle. To sense that behind anything that can be experienced there is something that our minds cannot grasp, whose beauty and sublimity reaches us only indirectly: this is religiousness. In this sense, and in this sense only, I am a devoutly religious man.”

Still, Einstein felt a deep bond with the Jewish people, one that transcended religion as well as the anti-Semitism that Nazis and their sympathizers leveled against him..

Despite his differences with fellow Jews in their practices and beliefs, Gimbel says, Einstein recognized that the relationship he had with Jewish friends was fundamentally different from the one he had with non-Jewish friends. He came to believe that whatever their beliefs, Jews shared common traits.

The first trait Einstein identified as common among Jews was an ability to face the world with a sense of awe and joy, whether the Jews in question were rapturous Hasidim or secular physicists.

The second trait Einstein identified was a sense of social justice. As he wrote in 1938, “The bond that has united the Jews for thousands of years and that unites them today is, above all, the democratic ideal of social justice coupled with the ideal of mutual aid and tolerance among all men.”

When Weizmann, Israel’s first president, died in 1952, Einstein, still a pacifist and an internationalist, was not an obvious choice. He had been a refugee from Germany since 1933, and had spent the past 20 years living in Princeton, New Jersey, where he was now a U.S. citizen. But he was still the most famous Jew in the world. Einstein, who had not visited the Middle East for 30 years, did not want to become president of Israel. But his official rejection of the honor was telling.

In a letter to the Israeli prime minister, David Ben-Gurion, Einstein wrote that he was “deeply moved” by the offer of the presidency and that he was disappointed at having neither the experience nor the skills to be able to accept.

Then, in a flourish that underlined his bond with the Jewish people, he concluded, “I am the more distressed over these circumstances because my relationship to the Jewish people has become my strongest human bond, ever since I became fully aware of our precarious situation among the nations of the world.”