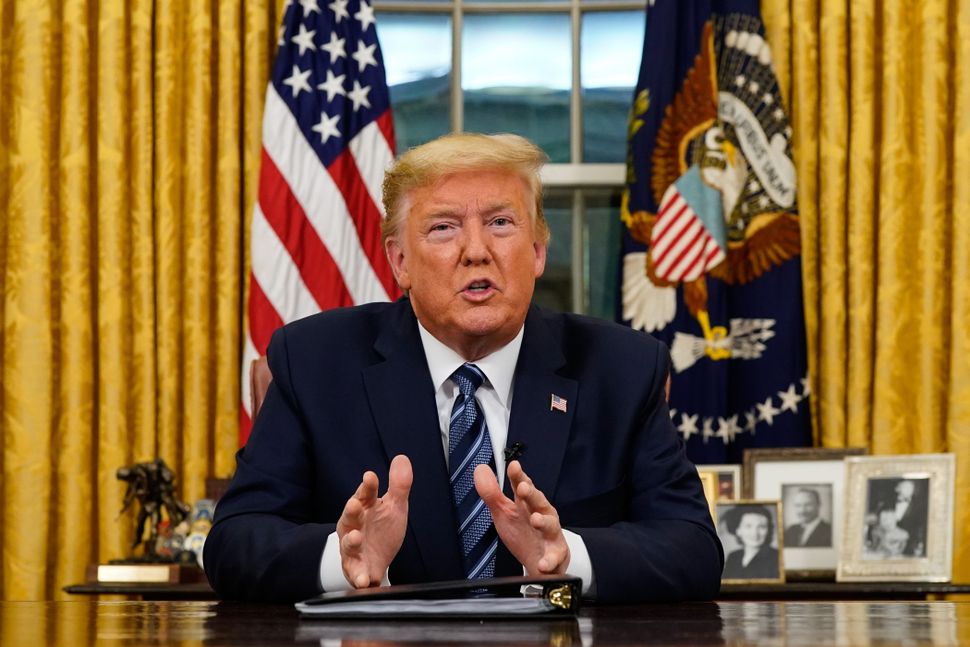 President Trump’s speech on what he called a “foreign virus” left the overwhelming impression that foreigners are the virus. The President’s disturbing phrasing echoed centuries of dangerous anti-Semitic rhetoric blaming Jews for widespread disease. Take a close look at this sentence, which Chris Cillizza of CNN had to tweet out for those who couldn’t believe what they had just heard:

“This is the most aggressive and comprehensive effort to confront a foreign virus in modern history,” Trump said.

The idea that outsiders or foreigners are both dangerous — and dangerous to health — is straight out of the Nazi playbook.

“A key part of Nazi ideology was to define the enemy and those who posed a threat to the so-called ‘Aryan race,’” the Holocaust Museum states on its website. “Nazi propaganda was essential in promoting the myth of the “national community” and identifying who should be excluded. Jews were considered the main enemy.”

Stay tuned for how this relates to “health.”

“A number of groups were targeted as enemies or outsiders. They included Jews, Roma (Gypsies), homosexuals, and political dissidents. Also targeted were Germans viewed as genetically inferior and harmful to ‘national health,’ such as people with mental illness and intellectual or physical disabilities.”

The long intertwining of “outsiders” and “national health” is why the word “foreign” sent shivers down my spine. In his remarks, Trump blamed China, and then pivoted to criticizing the European Union. And of course, as Foreign Policy has reported, China has been blaming the United States for the coronavirus.

Just to make sure the world gets the message, a book of propaganda by the Central Committee Publicity Department, formerly known as the Propaganda Department, is being translated from Chinese into multiple languages at the Chinese government’s behest.

Once again, propaganda is going international. (The Nazis, for the record, also had a massive propaganda translation campaign.)

Of course, the strategy of blaming someone else—namely, the “outsider” in a society—for a pandemic is at least as old as the Middle Ages, when Jews were blamed for the Black Death.

“In 1348 there appeared in Europe a devastating plague which is reported to have killed off ultimately twenty-five million people,” Fordham University’s Jewish History sourcebook explains. “By the fall of that year the rumor was current that these deaths were due to an international conspiracy of Jewry to poison Christendom.”

After the Black Plague ended, the idea of tarring the “foreigner” for widespread death persisted. In his chilling article “Immigration, Ethnicity, and the Pandemic,” Dr. Alan Kraut traces how immigrants were historically blamed for pandemics.

“In the 1830s, impoverished Irish immigrants were stigmatized as the bearers of cholera,” Kraut writes. “At the end of the 19th century, tuberculosis was dubbed the “Jewish disease” or the “tailor’s disease.”

The “Jewish disease” doesn’t sound so different from the “foreign virus.” And just in case those of us who have read a history book didn’t get the point, Trump made sure to use the phrase “America First.”

Public health has been used before as a justification to limit immigration, Kraut points out. “Medicalized prejudice became the foundation for the arguments of immigration restrictionists,” he writes.

The virus may already be the new “wall.”

At times, Trump’s speech sounded like a paean to the economy, peppered with comments on a virus. Despite Trump’s ample praise, stock futures dropped precipitously after he spoke about banning people and goods.

That, too, is something Jewish history knows about — economic crisis is also often pinned on outsiders. When the economy shudders, there will again be a need to blame someone, preferably someone foreign, someone who is not part of the “family,” as Trump put it.

Given these statements by world “leaders,” it’s no surprise that racism and xenophobia are on the rise, and that anti-Semitism related to the coronavirus is already spreading. Consider this tweet about an encounter on an airline:

It may be hard to pay attention to language at a time like this, with infections and deaths increasing, and travel bans going up everywhere. But history suggests that the term “foreign virus” and its hateful implications may be as dangerous — and perhaps more dangerous — than the coronavirus itself.