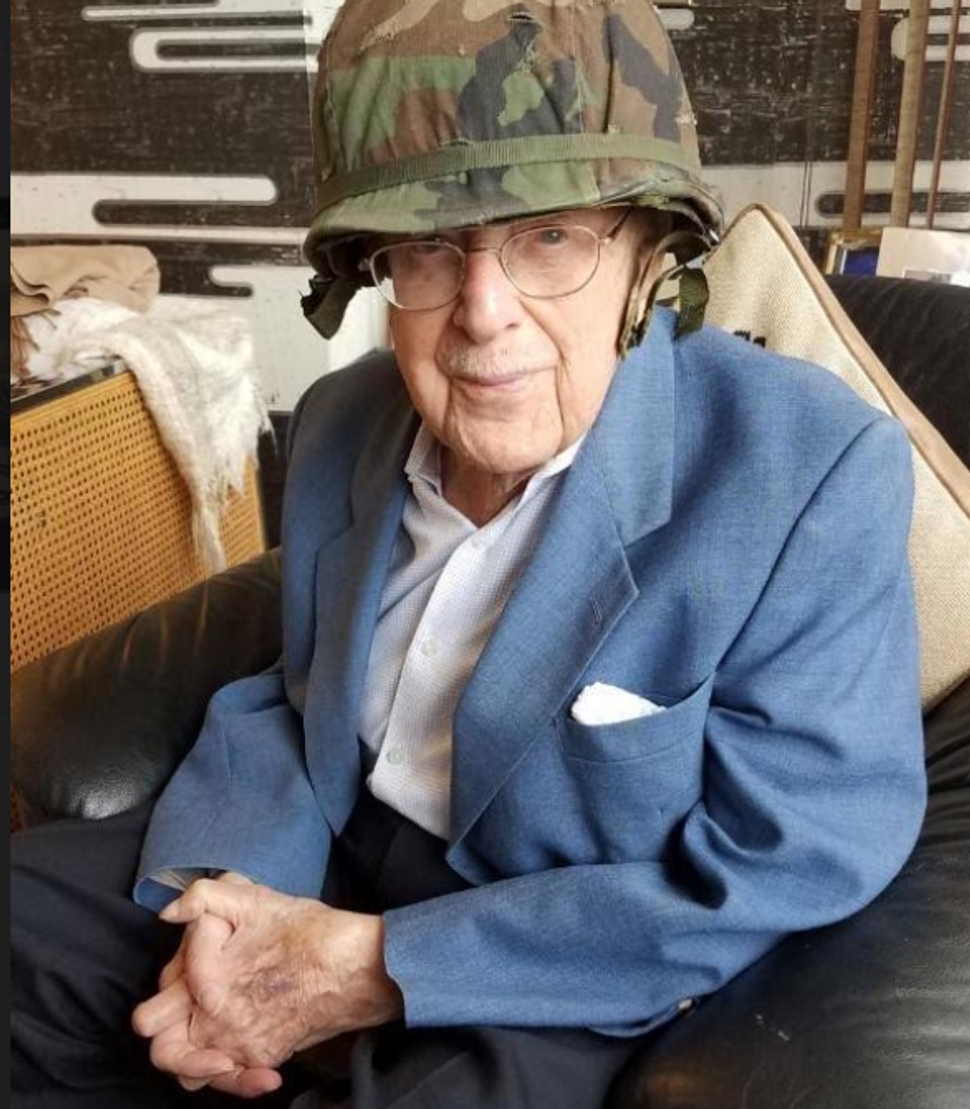 You could not miss Paul Caplan. Everyone called him a dapper dresser who would come to Saturday Shabbat at Rodef Shalom Congregation in Pittsburgh’s Squirrel Hill in a natty sports coat, shirt and tie. He liked nice clothes. He wore them well.

But flashy he was not when interacting with his patients, his family, his friends. He was a close listener and a physician who knew — long before this approach slowly came into modern medicine — that the whole person needed to be treated.

“A true mensch among men,” Rabbi Aaron Bisno of Congregation Rodef Shalom said in his eulogy after Dr. Caplan died March 7 at the age of 107 in his Pittsburgh home.

Dr. Caplan practiced that way — a mensch in medicine — as an internist and specialist in rheumatology. He landed on Omaha Beach in Normandy five days after D-Day. As battalion surgeon in the infantry working astride wounded soldiers, he was traumatized by the war, his daughter, Roberta Caplan, the Forward’s national director of major gifts and events, said. But he did his duty and survived, as did many of his patients.

He used those same sensibilities when he traveled the world for nearly two decades as touring physician to the Pittsburgh Symphony and tended to “pretty serious medical emergencies,” said Roberta Caplan.

“I always like to say my father was the Sherlock Holmes of the body,” said Roberta, better known as Robbie. And he was Freudian, too, using psychology to better understand his patients.

With the Family Car: Paul Caplan, circa 1930s Image by Courtesy of Roberta Caplan

This tool was particularly useful on one occasion when he was seeing a patient who was repeatedly suffering chest pains at night, even though his tests showed nothing. Any other doctor might have dismissed him, but Dr. Caplan got him talking only to discover he was reliving the torture of having chains tied around his chest by Germans during World War II. He concluded the man was re-living a nightmare, night after night. The family and Caplan cried, hugged and kissed, overjoyed that a cause had been found. He called this the best day of his life in medicine.

Caplan graduated in the Class of 1936 from the University of Pittsburgh. He witnessed scores of advances in medicine, from the widespread distribution of penicillin in the 1940s and the smallpox vaccine to the introduction of imaging technologies such as CT scans and MRIs. He entered medicine at a time when infections and fevers could rage while a doctor could do little more than stand bedside.

He was not afraid to expand his expertise.

For four years, he drove to Russelltown, Pa., to examine coal miners for spinal osteoarthritis and its effect on how they did their work. His research funded by the federal government and done with two other physicians, resulted in significant improvements in how miners received health benefits. He went to Haiti to treat patients outside of his specialty, and, at age 70, took the medical boards in Florida — just in case he and his late wife, Gertrude, decided to retire there. But, in truth, he never retired.

“They were pillars in the Jewish community,” Roberta Caplan of her parents. “They were a power couple.” Her mother died in 2006 when she was 85.

Like many Jewish Eastern European immigrants forced to leave Europe, his father, Philip Caplan, fled to America from Lithuania to avoid conscription into the Russian Army. He eventually opened Caplan’s Big Store in California, Pa., where his son was born.

The family lived there until they found a cross burning on their backyard lawn and the message, “Next time it will be your children,” Roberta said, recounting the story.

They moved to Pittsburgh where a very young Dr. Caplan, inspired as a boy by how a family doctor ministered to his sick mother at home, started down the road to becoming a physician. He was admitted to the University of Pittsburgh Medical School under the unstated quotas that then existed for Jews, women and African Americans. 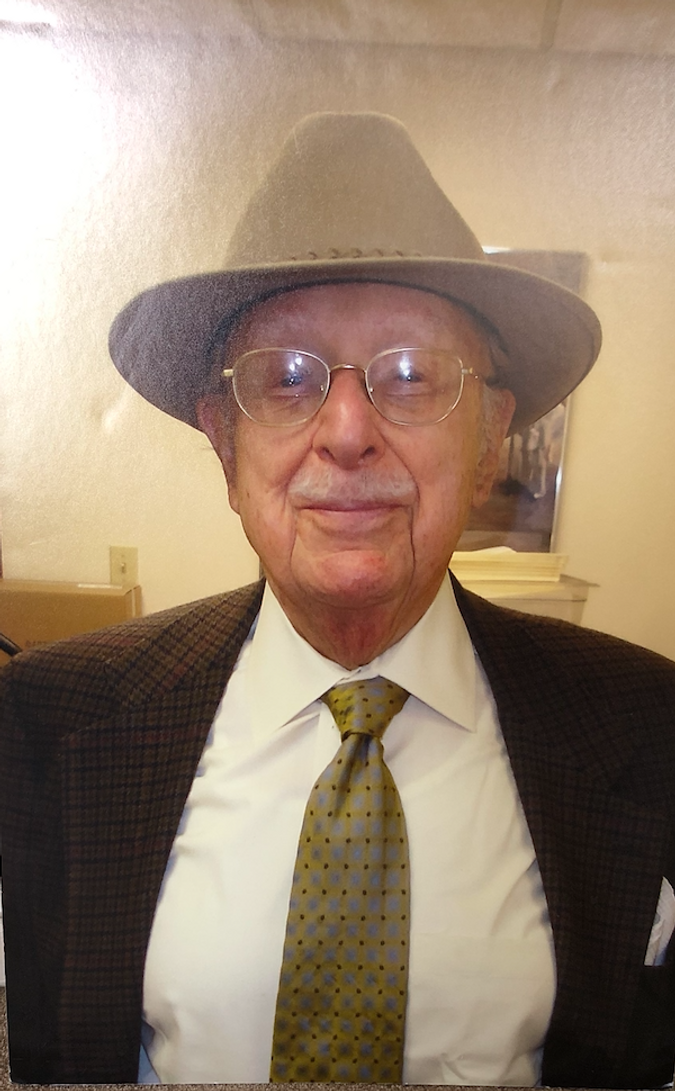 A Dapper Dresser: Dr. Caplan would come to Saturday Shabbat at Rodef Shalom Congregation in Pittsburgh’s Squirrel Hill in a natty sports coat, shirt and tie. Image by Courtesy of Roberta Caplan

In 2017, he received the Lifetime Alumnus Achievement Award from the University School of Medicine and Medical Alumni Association. It was one of many awards he received for medical accomplishments and his and his wife’s generosity in the community.

When he finally left the practice he founded, he lunched; he read more about psychology; a few times a week at home he played the trombone as he did when he was a young man and part of a jazz trio called the Caplan Jazz Band; and, at 103, when in Florida, he was still swimming in the pool.

And, he had his family—his two daughters, Roberta and Donna, and grandchildren and great-grandchildren. He lived alone with caregivers helping out, but resisted most of the essentials of very old age like a walker.

When he received his lifetime award, his parting advice to medical students was his lifelong credo: “Remember the art of listening. Take time to hear about the whole life of the patient, not just the disease. If you treat your practice as an avocation, not just a vocation, it will never be work.”