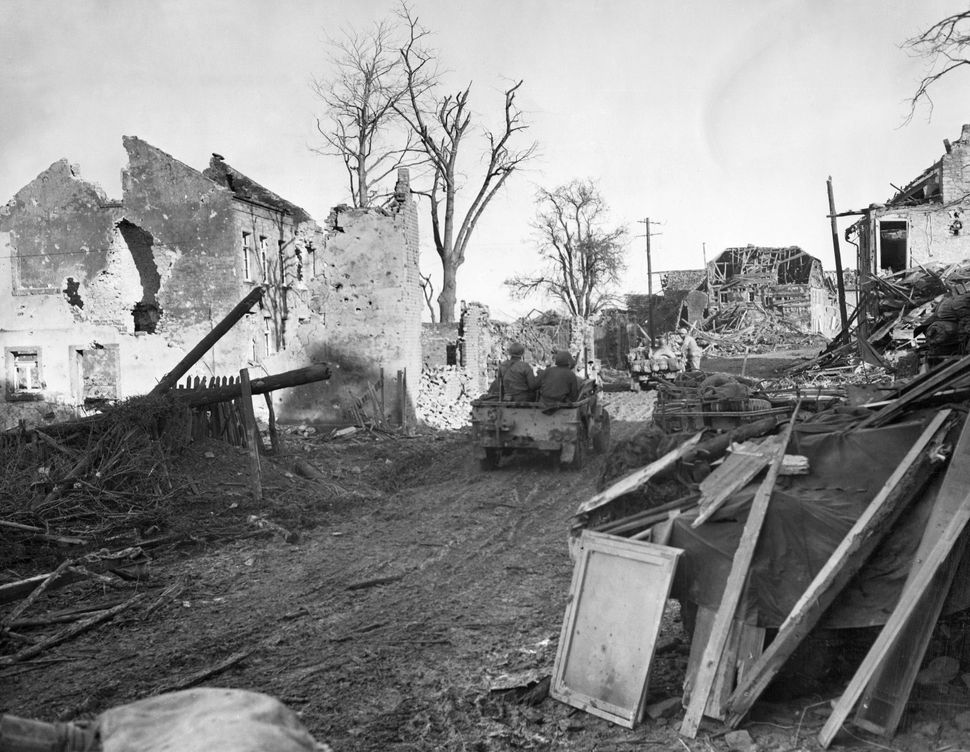 The ruins of a German town during World War II. Image by Getty Images

“Promise Me You’ll Shoot Yourself:” The Mass Suicide of Ordinary Germans in 1945

For Nazi Germany’s shattered populace, the spring of 1945 brought the apocalypse. Allied bombs had leveled German cities, and the country’s armed forces were in retreat. The advance of the Soviet Army sowed particular dread, as rampaging soldiers murdered civilians, burned conquered towns, and raped as many as two million German women.

This we know. Nor is it news that many top Nazi officials and military officers, from Hitler on down, chose to escape justice for their crimes by taking their own lives. But it is shocking to learn — as we do in Florian Huber’s gripping new history “‘Promise Me You’ll Shoot Yourself’” — that (at least) tens of thousands of so-called ordinary Germans followed suit.

Accurate figures are almost impossible to obtain. And the reasons for the suicide epidemic seem both varied and elusive. But, relying largely on first-hand accounts by survivors (including many journalists), Huber, a German historian and filmmaker, depicts this underreported phenomenon in graphic, cinematic detail.

The book begins with a portrait of Demmin, a town of just 15,000, plus refugees, where as many as 1,000 people killed themselves, and where the suicides were unusually well documented. Part II, “Demmin is Everywhere,” makes the case that the crisis was a national one. In Part III, “Tumultuous Emotions,” the least successful section, Huber chronicles how individual men and women navigated the rise of Hitler and the Third Reich. Finally, in Part IV, “The Pull of Silence,” he describes the shock and denial typical of the immediate postwar period.

Demmin, a Nazi stronghold, had never been targeted by Allied bombs. But, as the Wehrmacht prepared to withdraw, the town’s citizenry and refugees started to panic. Many were women alone, or with children, whose husbands had been killed or were still at war. One of Huber’s sources is a furrier’s wife, Marie Dabs, who feels both betrayed and self-reproachful. She writes in a postwar memoir that SS and Wehrmacht officers “had all spread hope and refused to hear of escape, and now they’d gone and escaped themselves.”

The suicides, fueled by rumors of Soviet atrocities, started even before the Red Army arrived. When it did, on April 30, 1945, soldiers plundered, raped women, and set the town ablaze. In the next few days, residents of all ages, classes and professions committed suicide, singly and in groups, with parents sometimes murdering their children. “It was as if the death urge had suddenly gripped them all,” Huber writes.

Because Demmin was at the confluence of three rivers, drowning was often the method of choice, with mothers pulling their children into the water. “There were dead bodies all over the place – hanging in houses and streets and green spaces and floating wherever there was water,” Huber writes. Others shot themselves or took poison. 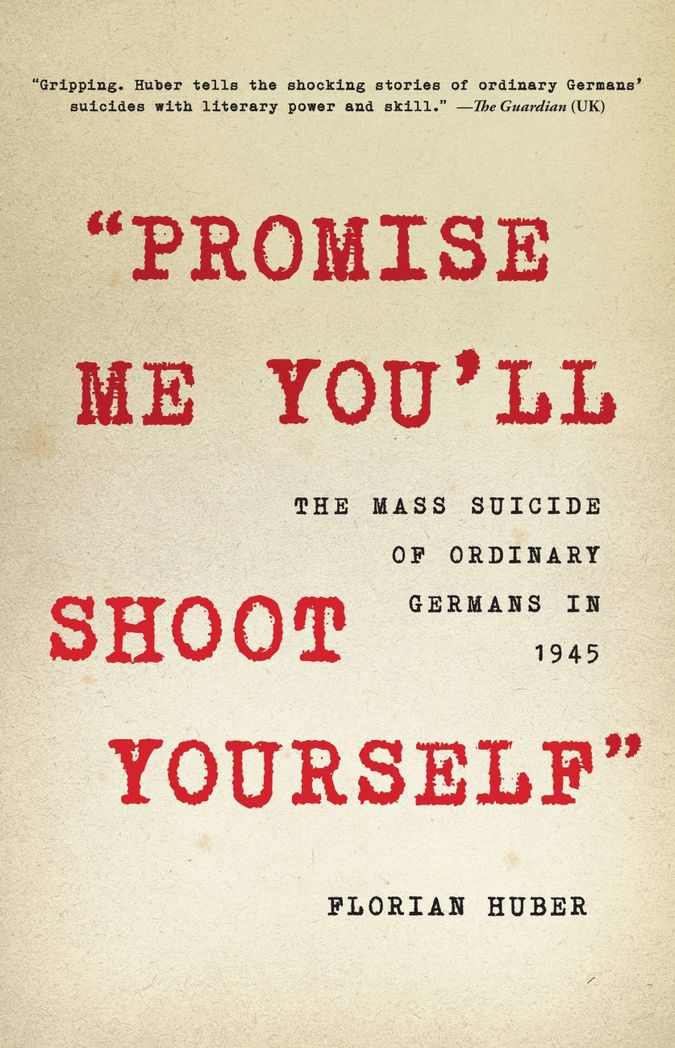 Promise Me You’ll Shoot Yourself: A story of mass suicide among Germans in 1945, by Florian Huber. Image by Little Brown & Co

Demmin was far from the only locality affected. The vicar of Berlin’s Kaiser Wilhelm Memorial Church warned a Danish journalist about a pending suicide epidemic, “evoking thoughts of an infectious disease….” The first wave had followed the Nazi defeat at Stalingrad in February 1943, a major turning point in the war. One 56-year-old teacher who killed himself later that year left a note saying, “The first and last cause of my despair is the hopelessness of victory.”

Some suicides were a direct response to the trauma of rape. Huber estimates that, in Berlin alone, about 10,000 women may have killed themselves after being raped. Others sought to avoid rape or other violence. After years of propaganda about the viciousness of their enemies, Huber writes, “the German psyche was consumed by existential fear.”

For some, he argues, there was also a sense of “[c]omplicity, culpability, guilt,” since Nazi crimes against Jews and others were hardly a secret by war’s end. Nazi propaganda actually encouraged suicide as an honorable way out. Certainly, the stigma against it eased. As Germans faced “the physical, emotional and mental horrors of Germany’s downfall, social conventions classifying suicide as an extreme, almost incomprehensible act no longer seemed to apply,” Huber writes. Among those documenting the results was the American photojournalist Margaret Bourke-White, who photographed an entire family lying dead of poison in Leipzig’s town hall.

To further elucidate the German psychology of defeat, Huber turns back the clock. “What can the inner world of these Germans have looked like if the coming defeat made them see death as the only way out?” he asks.

So Huber traces the emotional and intellectual journeys of a set of Germans as they deal with the political and economic dislocations of the Weimar period, (mostly) embrace the new Nazi world order, observe or participate in its excesses, and occasionally entertain doubts. Huber writes that many of these Germans felt “a presentiment of their own guilt,” and, when Germany capitulated, “not just a collective loss of meaning but the threat of personal disintegration.”

Still, most tell their stories retrospectively, in postwar memoirs, their self-justifications making them unreliable narrators. And these are the survivors, not the suicides. So, although their regrets and soul-searching provide some hints, they don’t significantly enhance our understanding of the mass suicides.

In the immediate postwar period, as Huber rightly tells us, most Germans initially embraced denial, seeing themselves as victims of the Nazis and the war. Only in later decades did the country begin to wrestle more deeply with its complicity, a process accelerated by German reunification in 1990.

The book’s arresting title – “ ‘Promise Me You’ll Shoot Yourself’ ” — is lifted from a daughter’s account of her father’s final words. She says that he handed her a pistol before departing in a futile last-ditch effort to defend Berlin. We know about his exhortation only because she defied it, choosing life instead.