Kaddish for Krzysztof Penderecki — a Christian composer with a Jewish soul 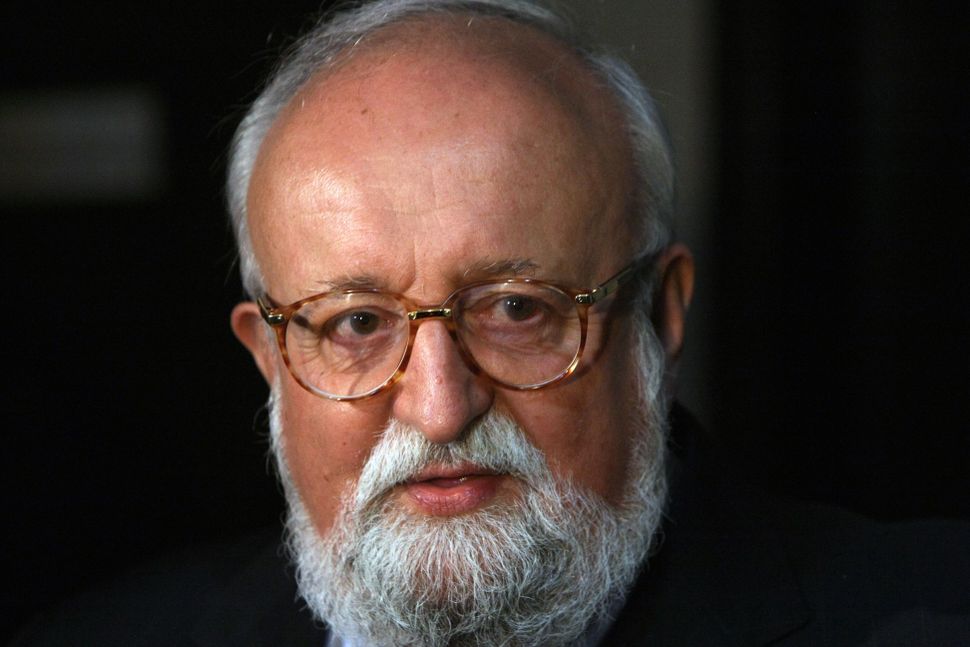 World-renowned Polish composer Krzysztof Penderecki – widely regarded as one of the greatest composers of the last half-century — died on Sunday, March 29, at the age of 86. (While members of his family and inner circle are reported to have had symptoms of the new coronavirus, Penderecki is said to have died from complications due to a long illness.)

While you may have never heard of Penderecki, the winner of a handful of Grammy Awards, you almost definitely have heard his music, and probably more than once. Penderecki has been a favorite of filmmakers for decades, especially those whose work tend toward the moody, enigmatic, and horrifying. The directors who have used selections from Penderecki’s classical songbook include Stanley Kubrick (“The Shining,” “2001: A Space Odyssey”), William Friedkin (“The Exorcist”), and David Lynch (“Inland Empire, “Wild at Heart,” TV’s “Twin Peaks”). Martin Scorsese’s “Shutter Island” featured Penderecki’s Symphony No. 3 and “Fluorescences.”

Although Penderecki was not Jewish, and a vast portion of his work addressed Christian themes (he was brought up in the Armenian church), over the course of his career, Penderecki did write pieces that were overtly Jewish both thematically and musically.

Penderecki himself attributed his interest in and the influence of the Jewish world to his childhood growing up in the southeastern Poland town of Dębica. Called Dembitz in Yiddish, the majority of the town was populated by Hasidim, and thus Penderecki, whose ancestral home straddled the Jewish quarter, grew up hearing the sounds of Jewish life – the Yiddish language, the cry of the cantor, and the rhythms of the Jewish wedding bands.

Living on the edge of the Jewish quarter also gave Penderecki a front-row seat to the expulsion of the Jews by the occupying German forces in 1939. “The problem of that great apocalypse, that great war crime, has undoubtedly been in my subconscious mind since the war, when as a child, I saw the destruction of the ghetto in my small native town of Dębica,” he once said.

In an interview with Polish radio, Penderecki acknowledged the strong influence of his early exposure to Jewish life on his music, saying, “It is strange that after all these years the music that I had in my ears comes back. For example, in two of my compositions, klezmer music is reiterated intentionally – in the ‘Sextet’ and even in the ‘Concerto Grosso.’ I most likely heard the motifs as a child.”

Penderecki’s early work, in pieces like “Threnody for the Victims of Hiroshima” and “The Passion According to St. Luke,” were solidly avant-garde and atonal — Penderecki first called his Threnody “8:37,” in an overt nod to John Cage. Over time, his music grew more melodic, although never wholly conventional. It was always colored by his wide-ranging palette of sounds; included extreme dynamics from a whisper to a scream; and pulsed to an inner rhythm that seemingly defied any measure of time. By the mid-1970s, however, he was considered a neo-Romantic composer, an heir to the geniuses of the late 19th century, including Mahler, Brahms, Beethoven, and Wagner, rather than an acolyte of his earlier influences, including the aforementioned Cage as well as Webern, Boulez, Stravinsky, and Stockhausen.

Right from the beginning of his career as a composer, Penderecki incorporated Jewish themes and motifs into his work. One of his earliest pieces is 1958’s “David’s Psalms” – based on texts by the great 16th century Polish Renaissance poet Jan Kochanowski. Another early piece, “Strophy,” included Hebrew texts alongside Greek and Persian.

Penderecki’s 1963 composition “Brygada Śmierci (Death’s Brigade)” was based on diary entries by Leon Weliczker, a Sonderkommando. A critic at online magazine Culture.PL wrote, “Weliczker’s text is a truly shocking testimony of the Holocaust – completely emotionless and terrifyingly detailed. Penderecki decided to use it without any modifications, only adding sound effects that were created at the Polish Radio Experimental Studio.”

One of Penderecki’s most Jewish compositions is “Kadisz (Kaddish),” a four-movement cantata that draws upon the writings of Abraham Cytryn, who died at Auschwitz, alongside verses from the books of Jeremiah and Daniel, as well as the title piece, drawn directly from Jewish liturgy and performed cantorial-style in the original Aramaic. “When writing music for the Kaddish,” said Penderecki, “I evoked the prayers that were sung in Eastern Galicia, Ukraine and Romania. I was advised by my late friend, Boris Carmeli…. He would sing me various melodies that were sung by his grandfather, thus they had to be at least as old as the mid-19th century.” Penderecki dedicated his “Kadisz” to “the Abrahams of Łódź who wanted to live. To the Poles who saved Jews.” The world premiere of the work took place as part of the commemoration of the 65th anniversary of the liquidation of the Łódź ghetto.

Penderecki was commissioned by the City of Jerusalem to compose a piece marking its third millennium. “The Seven Gates of Jerusalem” (1993), which became his Symphony No. 7, was a monumental work informed by patterns of seven, including the city’s seven gates, a seven-sound theme, seven repetitions of the E-major chord, and fragments of seven different texts (six Psalms and an extract from the Book of Ezekiel, delivered in Hebrew).

Penderecki also addressed the Shoah in “Dies irae” (1967), written for the uncovering of a monument commemorating victims of Auschwitz. The commission was initially awarded to Henryk Górecki, who found himself unable to complete the work – “he found the theme too horrifying” – and so passed it on to his colleague Penderecki. The resulting work, known also as the “Auschwitz Oratorio” in homage to the Holocaust victims, would take its place as part of his monumental “Polish Requiem.” It was that other Holocaust, however, that inspired perhaps Penderecki’s best-known work, “Threnody to the Victims of Hiroshima” (1959-61).

Rock fans know Penderecki from his work with Radiohead composer-guitarist Jonny Greenwood, who was always a huge fan. In 2012, Penderecki recorded an album with Greenwood.

Writing about a Carnegie Hall concert in 1986, with Penderecki leading the Krakow Philharmonic, New York Times critic Bernard Holland called Penderecki, “our most skillful purveyor of anxiety, foreboding and depression.” As it turns out, this deeply Christian composer may have also plumbed the depths of the Jewish soul in some his works.

Seth Rogovoy is a contributing editor at the Forward. A longtime music critic, his books include “The Essential Klezmer: A Music Lover’s Guide to Jewish Roots and Soul Music” (Algonquin Books, 2000) and “Bob Dylan: Prophet Mystic Poet” (Scribner, 2009).

Kaddish for Krzysztof Penderecki — a Christian composer with a Jewish soul