The curious incident of the pig in the Haggadah 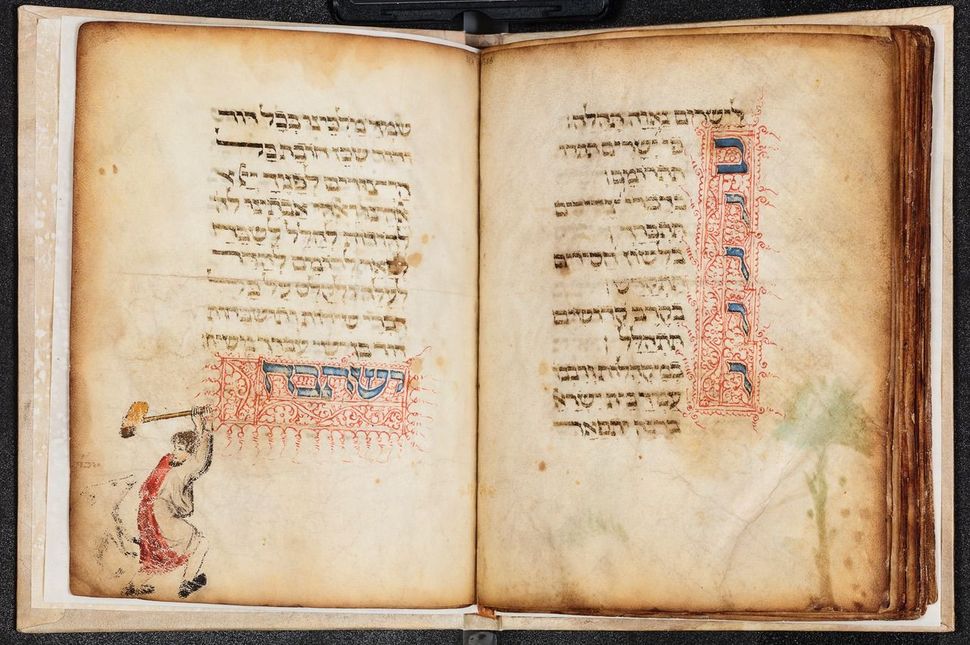 A pig in the Haggadah Image by Les Enluminures

Every Passover season, new haggadahs appear, each one reflecting something about the specific time and place it was created and the audience it tries to reach (think of the “Hogwarts Haggadah” or this year’s “Human Rights Haggadah”). In many of these, pictures illustrate or expand on the texts. This practice reaches back to the 13th century when the first haggadahs were written and illuminated. Some of these illustrations are spectacular works of art in their own right, while others are simple, whimsical drawings. But in every case, the pictures ask us to study them carefully and to think about how they are supposed to enhance our seder experience.

It is unlikely that any picture you will encounter in your haggadah this year will be as strange as that of a pig being slaughtered. This image was painted into a haggadah made in or near Milan in 1390 (commonly known as the Lombard Haggadah, after the region in which it was made). A pig in the haggadah? It cries out for explanation, and figuring out what it is doing there tells us about the Jews who used it in the fourteenth century. It also prompts us to be alert to the hidden visual surprises potentially lurking in our haggadahs. 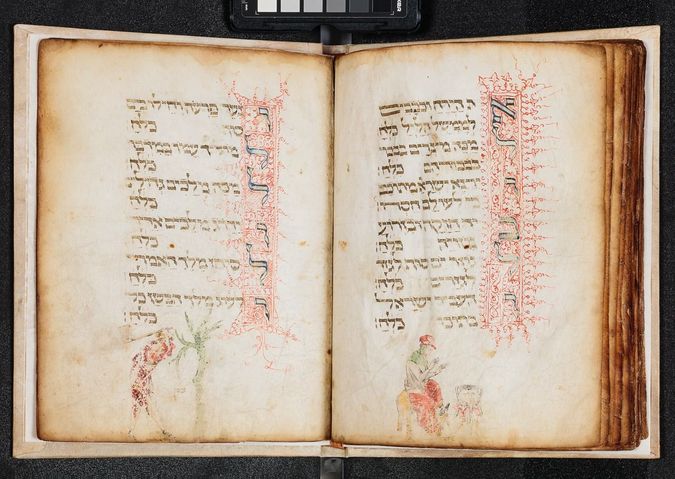 The Lombard Haggadah: The “Hallel” contains a series of twelve little scenes that correspond to an appropriate seasonal activity. Image by courtesy of Les Enluminures

So why did an artist add a picture of a pig being slaughtered to the Lombard Haggadah? Obviously, this is not a scene taken from the Exodus story, or one of the many seder rituals. The depiction of the pig comes at the end in the lower margins of the Hallel series of Psalms and Hymns of Thanksgiving. The Hallel section begins with the long Psalm 136, which includes references to the Exodus. If the artist were trying to illustrate the psalm literally, he might have included pictures of the plague of the first born, the passage through the Red Sea, or even the slaying of Og, King of Bashan.

Instead, the pages beginning with Hallel contain a series of twelve little scenes that correspond to an appropriate seasonal activity. 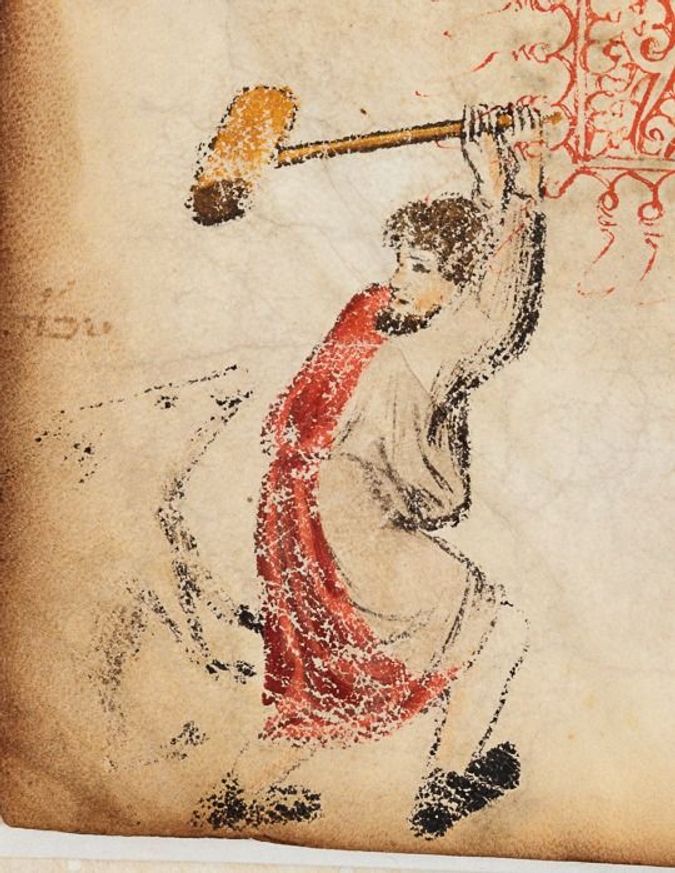 The Lombard Haggadah: This image was painted into a haggadah made in or near Milan in 1390. Image by Les Enluminures

The series of twelve Labors of the Months was common in the art of the European Middle Ages and appeared regularly in church painting, sculpture and illustrated Christian prayer books. December was distinguished as the month in which one kills pigs, either for holiday feasts or to supply the long winter months. Now, it’s not unreasonable to think that Jewish men in the Middle Ages were involved in pastimes like keeping warm in the winter, but it is harder to imagine them involved in the slaughtering of non-kosher pigs. And Psalm 136 itself doesn’t mention feasting, tree pruning, and certainly not pig slaughtering. So if the Lombard Haggadah isn’t recording actual activities and it’s not illustrating the psalm literally, what is it doing?

In the Christian context, the Labors of the Months expressed a link between the regular unfolding of seasonal time and the activities of people, a way to connect the divine and the human. Like the modern day smiley face, the Labors of the Months could be non-denominational. In fact, they were already included in a mahzor (holiday prayer book) painted in Southern Germany in 1272. In the mahzor, the labors illustrate the seasonal prayers for rain and dew, though the picture for December-time uses an ox instead of a pig.

The owners of the Lombard Haggadah, however, apparently had no problem with a picture of a pig at their seder.

Were these northern Italian Jews more liberal than the users of the earlier German prayer book? They were certainly affluent: they were able to hire a fine artist from Milan to paint elegant and fashionable images. It’s possible that the Labors of the Months were a Christian artist’s idea, but still, the Jewish buyers would have had to at least approve the imagery. Why would they? The answer comes at the beginning of Psalm 136, which starts with verses describing Creation. In the Psalm, and in the haggadahs that contained it, this put the Exodus in a larger context. In the Lombard Haggadah, the Christian artist and the Jewish owner, whether separately or as a team, understood the element of cosmic time central to the psalm. And as had been the case in so many works of art in the Middle Ages, pictures of the Labors of the Months were a fine way to communicate this theme. The fact that expressing the connection of the Israelites to the God who created the universe and who brought them out of Egypt meant introducing a pig into the haggadah obviously did not bother the Jewish users of the book.

It’s strange to imagine turning the pages of a haggadah and seeing a picture of a pig being slaughtered. But many modern haggadahs contain their own unexpected visual wonders. The Curious Incident of the Pig in the Haggadah, to paraphrase Sherlock Holmes, is a provocative, but timely, reminder that we should keep our eyes as well as our ears open at the seder.

Adam S. Cohen is Associate Professor of Art History at the University of Toronto and president of Kensington Market’s historic Kiever Synagogue. He is the author of “Signs and Wonders: 100 Haggada Masterpieces” from Toby Press (2018).

The curious incident of the pig in the Haggadah