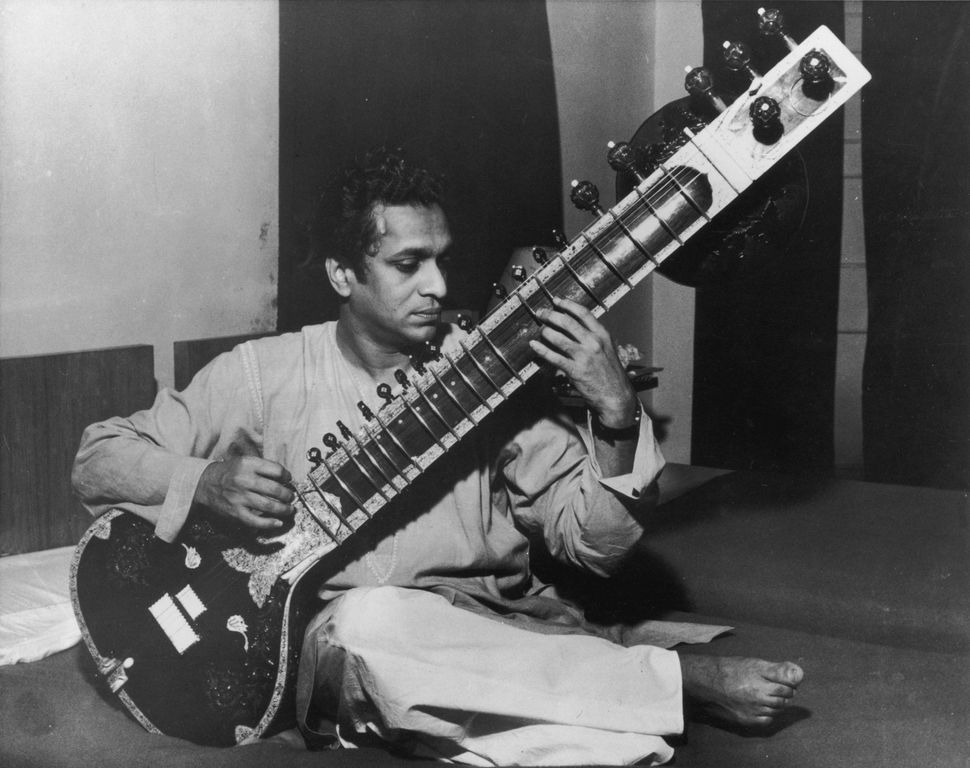 April 7 marks the centenary of the Indian Sitar Master Ravi Shankar (1920– 2012), whose interactions with Western musicians, such as the Beatle George Harrison, have been celebrated, although the full extent to which Jewish musicians were part of Shankar’s influential career remains relatively little known.

In 1950s middlebrow American Jewish culture, Shankar was already a star. In a memoir, the novelist Judith Krantz (born Judith Bluma-Gittel Tarcher) recalled how her father Jack Tarcher, who died in 1960, would religiously attend Shankar’s concerts in New York.

Tarcher was not Shankar’s only devotee. “The Encyclopedia of Jewish American Popular Culture” reminds us that when the composer Philip Glass was studying music in Paris in the early 1960s, he was hired to notate music written by Shankar, so that Western musicians could play it for a film score.

The movie, “Chappaqua” (1966) about drug addiction, boasted the Swiss Jewish photographer Robert Frank as cinematographer and a cameo appearance by poet Allen Ginsberg.

Glass was impressed by the allure of Shankar, who had been representing Indian culture to Westerners since his boyhood, when he danced in an internationally successful troupe led by his brother Uday Shankar. Shankar’s hectic life of cross-cultural influences is detailed in a new biography by Oliver Craske from Faber & Faber publishers.

At different times, Glass would insist to reporters about his blend of allegiances, “You might say I’m a Taoist, I’m a Hindu, I’m Jewish, I’m Christian. I mean, I’m interested in all of these things, but I’m not a card-carrying member of anything.” Glass also called himself a “Jewish Taoist Hindu Toltec Buddhist.”

More than merely an ethnic tzimmes, Glass identified with the cultural melting pot that became increasing trendy by the 1970s. In 1990, he and Shankar collaborated on Passages a chamber music album in which Hindustani classical sounds add backbone and content to Glass’ flat minimalism.

Decades earlier, the Romanian composer George Enescu introduced his protégé, violinist Yehudi Menuhin, to Eastern music. Enescu reportedly even played violin at a Paris performance by Ravi and Uday Shankar in the 1930s.

In the 1950s, Menuhin finally met Shankar in India, where he had gone to study yoga with B.K.S. Iyengar. By 1959, Menuhin had invited Shankar to perform at England’s Bath Festival, which he directed. They recorded albums together, including “West Meets East” 1966 and a selection of sitar concertos that today seem like dilutions of their respective musical styles, but they were impactful at the time.

Among other Jewish musicians mesmerized by Shankar was the composer David Amram who will be 90 in November. Born in Philadelphia to a Hebrew-speaking family of former kibbutzniks, Amram composed music with world references, to extend Jewish cultural vocabulary.

After Israel’s victory in the Six-Day War of 1967, instead of America’s quasi-exclusive focus on Ashkenazi Jews, attention was increasingly paid to the culture of Jews from Yemen, Persia, Bukhara, Syria, and North Africa. Amran looked to Shankar for inspiration, as he told the radio host Howard Smith in February 1969, citing Shankar’s explanation of why sitar music grew in popularity: “The music has to be so strong that it can never die, because of the strength inherent in the music.”

This strength surely appealed to Ahuva Ozeri (1948-2016), an Israeli singer of Yemenite origin, who studied the Bulbul Tarang, an Indian plucked string and keyboard instrument, at Shankar’s Kinnara School of Music, founded in Mumbai in 1962. Ozeri expressed intense emotion on the Bulbul Tarang, whose name in Hindi means “waves of nightingales.”

With its buttons resembling typewriter keys that raise the pitch of the strings, Ozeri’s Bulbul Tarang, on her album, Where is the Soldier? (1975) lamented military losses during the Yom Kippur War of 1973.

In 1967, Shankar had opened a Western branch of the Kinnara School of Music in Los Angeles, which soon attracted pupils such as Robby Krieger, as Guy Oseary’s “Jews Who Rock” notes.

Krieger, born in 1946 to a Jewish family in Los Angeles, is best known as the guitarist of the rock band The Doors. He wrote or co-wrote the hits “Light My Fire” and “Love Her Madly.” Krieger was long a fan of diverse musical cultures, and in the 1960s was taught to play flamenco guitar by the Asian American playwright Frank Chin.

Krieger had no direct personal contact at the time with Shankar, who generally disdained American students for their impatience and drug use, which repelled him during much-publicized appearances at the Monterey Pop (1967) and Woodstock (1969) Festivals.

Impressed by Shankar’s Evening Raga album (1968) Krieger created a spooky effect for the Doors song The End about a cataclysmic love affair, in which his electric guitar sounds like a sitar. Another Doors hit, “Light My Fire,” includes guitar improvisation by Krieger, who used fingerings similar to the sitar technique he had learned at the Kinnara School of Music.

Investigating the trance and hypnotic elements of Indian music and culture, Krieger also attended meditation classes. Not all Westerners were as enamoured of Shankar’s music-making. The German musicologist Hans Neuhoff, a specialist in traditional Hindu music, opined that Shankar’s sitar style was uninfluential and melodically inferior to other Indian performers.

Others hinted that the Shankar associate Ali Akbar Khan, a player of the sarod, a deeper-toned string instrument than the high-pitched sitar, was a more profound instrumentalist, but less verbally gifted in English and therefore no rival for Shankar’s self-appointed role as world cultural ambassador.

Craske’s biography implies that cultural influences operated in both directions. Shankar was a devout follower of the Bengali Hindu saint and guru, Sri Anandamayi Ma. After 1982, this icon’s ashram in Haridwar, North India, was headed by Swami Vijayananda, born Abraham Jacob Weintraub (1914-2010) in southern France, the son of a rabbi.

As Rabbi Yakov Nagen recounts in a study of Jewish spirituality in the East and West, After being rejected as a volunteer for the Haganah during the 1948 Arab–Israeli War, Weintraub embraced Indian philosophy and its concept of finding God within oneself. He traveled to meet Anandamayi Ma in 1951.

Over half a century later, Weintraub, by then known as Swami Vijayananda, was still at the ashram, where his room contained a Hebrew Bible; a Tanya, a work of Hasidic philosophy by Rabbi Shneur Zalman of Liadi; the “Sefat Emet” by the Hasidic rabbi Yehudah Aryeh Leib Alter; and Simcha Raz’s “Tales of the Righteous,” about inspiring rabbis. Curiously, he also owned a biography of Ariel Sharon.

Shankar must have encountered Swami Vijayananda, a paragon of remaining Jewish despite other spiritual commitments. To the end of his life, Swami Vijayananda subscribed to The Jerusalem Post, although he never traveled to Israel, and would regale visitors with renditions of Naomi Shemer’s song “Jerusalem of Gold” and “Eishet Chayil,” (A Woman of Valor) customarily sung before Kiddush on Friday nights.

Just as Shankar’s transmutations of Eastern culture fascinated Jewish musicians and others, Swami Vijayananda (Abraham Jacob Weintraub) reminded Shankar that Jewish cultural identity, despite any changes it may undergo, endures through inherent strength.