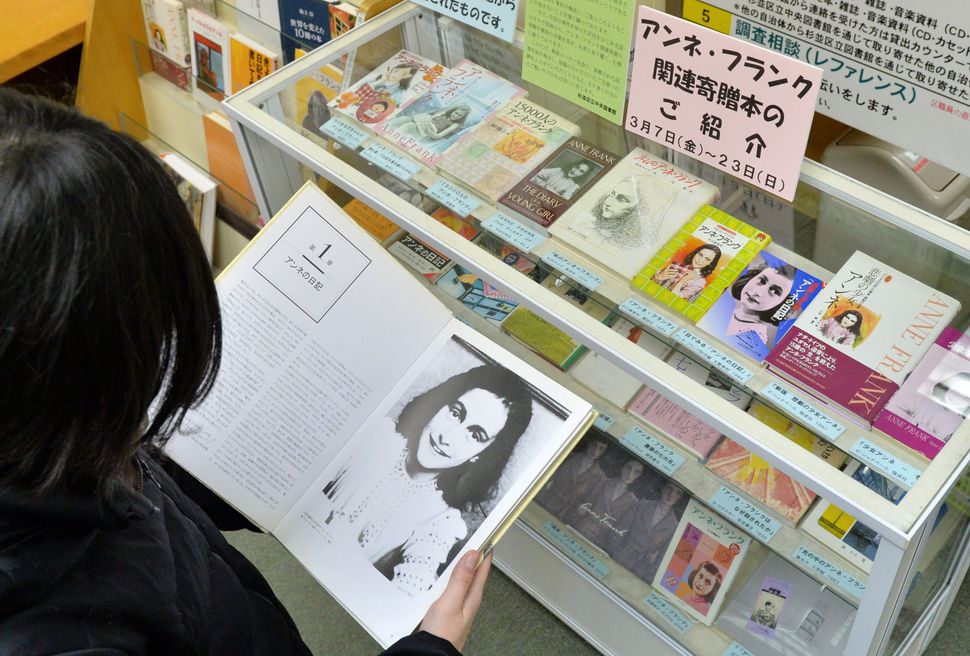 A woman in Japan reads a book about Anne Frank. Image by Getty/KAZUHIRO NOGI/Staff

BREAKING: Tonight, Never Again Action showed up at New York’s immigration courthouse, to demand that @NYGovCuomo use his emergency powers and influence to ensure the release of ICE detainees from New York’s detention centers before COVID turns them into death camps. pic.twitter.com/rIYWxTb5zy

The oversize closeup of Frank’s smiling face, projected above the columns of an immigration court, came with a trenchant all-caps message for New York Governor Andrew Cuomo: “Anne Frank died of typhus. Not a gas chamber. ICE detainees can’t social distance. Governor Cuomo, free them all!”

The protest, a version of which happened simultaneously at a Boston courthouse and a week later in Philadelphia, was the work of the Jewish activist group Never Again Action, and aimed to urge Cuomo, Massachusetts Governor Charlie Baker and Pennsylvania Governor Tom Wolf to release undocumented immigrants from ICE detention centers to protect them from the close-quarters spread of coronavirus. Frank is believed to have died of typhus in February, 1945 at the Bergen-Belson concentration camp in northern Germany. By invoking Frank, the group was making a forceful statement: Without decisive action, governors could create a humanitarian crisis that could cause the death of innocents.

But it’s not only Jews and activists who are looking to Frank in the current moment. With a third of the world under lockdown, many have drawn parallels to her years-long captivity in an Amsterdam annex. Some, like Never Again Action, have found a deadly serious analogue to Frank’s life, while others have been more flip. Since her diary’s publication in 1947, people have sought out Frank for comfort and courage in unsure times; now, as we face a global crisis that hits us all at home, many are identifying with her in even more direct — and intimate — ways.

On Twitter, many have turned Frank’s predicament into an easy joke.

It’s a variation of a joke I heard a fair amount growing up: When someone was emphasizing the need to make as little noise as possible, they inevitably dropped Anne Frank’s name.

But alongside the cynical references to Frank are plenty that, in their earnestness, shed light on how we train young minds to think of Frank.

In a March 20 Slate article, in which the magazine’s writers asked their children how they felt about the pandemic, nine-year-old Eliza Roth said, “My dad told me that people in the future would learn about the coronavirus in school. For some reason that made me think of Anne Frank. Then a thought hit me like a dodgeball. Anne Frank died. I almost grunted a short, blunt oof, right then and there.”

After an eight-year-old San Francisco girl named Ady read a biography of Frank, The New York Times reported, she realized “that she, too, was living through what would soon become history” and began keeping a diary of her own.

Young people like Roth and Ady, who are often first exposed to Anne Frank in a school setting, often relate to her clear, emotionally vivid descriptions of common childhood feelings and experiences. “They see her as a peer and that’s one of the reasons why Anne Frank’s story is such a fabulously effective introduction to the stories and lessons of the Holocaust,” said Elisa Rapaport, chief operating officer at the Anne Frank Center for Mutual Respect in New York City. “It doesn’t matter what religion, what ethnicity. Kids are kids. Teenagers are teenagers and she wrote about those experiences.”

Today, as kids experience a fragment of what Frank did — indefinite confinement and an unclear future — it’s easy to understand why their attachment to her story might intensify.

And they’re not the only ones.

For many, a childhood connection to Frank lasts well into adulthood. And in the present moment, adults too have been returning to Frank’s example — both as a tool of instruction for the youth of 2020 and a touchpoint for themselves.

In a piece for the Washington Examiner, Kendall Wingrove, after griping about how teens are conducting themselves in the pandemic, conceded that younger generations are frightened and looking for answers. For help in navigating the new normal, in which school has gone remote and adolescents face moral dilemmas over social distancing, Wingrove suggested “It’s the perfect time to discover, or get reacquainted with, Anne Frank,” who “endured” for years against an “enemy surrounding her” and served as a profile of courage whose writings outlasted the regime that took her life.“Young adults must avoid harmful foes like complacency and apathy,” Wingrove said of today’s reality. “While remembering never to put others at risk, they also cannot be paralyzed by fear.”

Val McCullough of Colorado’s Loveland Reporter Herald had a different take on Frank’s significance in this challenging global moment. “What helps me is knowing that others have managed horrendous confinements for long periods of time,” McCullough wrote. “By comparison our ‘Stay at Home’ is a piece of cake… Anne Frank — a young Jewish teen — comes to mind. Along with family and friends, Anne hid — for two years — from the Nazis during World War II in cramped quarters, hardly daring to make a sound.”

Writing from Amsterdam, Colleen Boland stressed that Frank’s fraught situation reminds of her relative privilege in the face of this crisis. “Despite extraordinary restrictions here,” Boland wrote, “I enjoy a completely different level of freedom than Jewish people did in this very same place, as Anne Frank describes how events began to unfold in May 1941.”

Others on Twitter have invoked Frank to the same ends (often humorously).

Anne Frank remained in quarantine for 761 days without Netflix, ps4, half of Walmart and 36.567 roles of toilet paper remain calm people we will win this #coronavirus epidemic take a example of her resilience and stay strong and calm ❤️??( I know that was different reason) ?

When you’re feeling shitty, remember that Anne Frank had to share a room with a crabby-ass old dude who mainsplained every day for 2 years. And she never got outside because Nazis.

But some, rather than mining perspective from Frank’s ordeal, see her now as a model for how to move through trying circumstances. Alan Jacques of the Limerick Post looked to Frank’s prose for hope.

Reflecting on her quote, “Think of all the beauty still left around you and be happy,” Jacques wrote that while he’s frightened of the rapid changes and the dangers of this time, Frank’s words emphasize the urgency of optimism and the futility of fear.“Right now, it is the words of 14-year-old Holocaust victim Anne Frank, a courageous, perceptive and gifted young girl, who gives me inner strength,” he wrote.

While some of the gestures at Frank’s life that are now circulating are more effective than others, they all serve to indicate Frank’s durability as a symbol in difficult times. Her significance in that context is far from new. As Rutgers Jewish studies professor Jeffrey Shandler wrote in an article for the Anne Frank House website, Frank has long been used to represent “an archetypal Jew, Holocaust victim, human rights cham­pion, girl, adolescent writer, diarist, or feminist voice.”

But while many have projected these qualities onto Frank, her use at this moment — that of the greatest global disruption since World War II — feels natural. The context in which she lived was markedly different than now, but people across the world have been primed to consider her legacy at a time of unprecedented moral choices, isolation and fear. We naturally seek answers from those with experience, and what Frank has offered for decades is an example of not just tragedy, but also resilience, kindness and grace. Frank’s story has always served as essential testimony for times of trouble. So it makes sense that now, maybe more than ever, people are asking what Anne would do.

The Anne Frank House in Amsterdam, one of the central keyholders of Frank’s legacy, has provided an especially telling example of her potential at this moment, particularly for today’s plugged-in youth. While the museum is closed until at least June 1, it has launched a new initiative to engage kids during the pandemic, rolling out a 15-part YouTube “video diary” that asks “What if Anne Frank had a camera instead of a diary?” The series, which documents Frank’s life from her diary entries of March 29, 1944 to her apprehension by the Nazis on August 4 of that year, premiered its first episodes in the Netherlands on March 30.

In one episode, Frank (13-year-old Luna Cruz Perez), captures herself on camera while shelling peapods with her family in a time of evident peace. Next, we cut to her in hiding in the secret annex. There, she smiles, giggles while trying to find a good angle on her phone and recounts her crush on Peter van Pels. Later she squabbles with her parents at dinner, embraces them when she hears a radio broadcast about D-Day and ends the episode recalling a time when she was free to roam outside with her friends, laughing with them on a street car.

Without the period clothing and sets, she would look like any other teenage girl. We sense that we know her, just like we always have. We’re only getting to know her better now.