A seder in Siberia 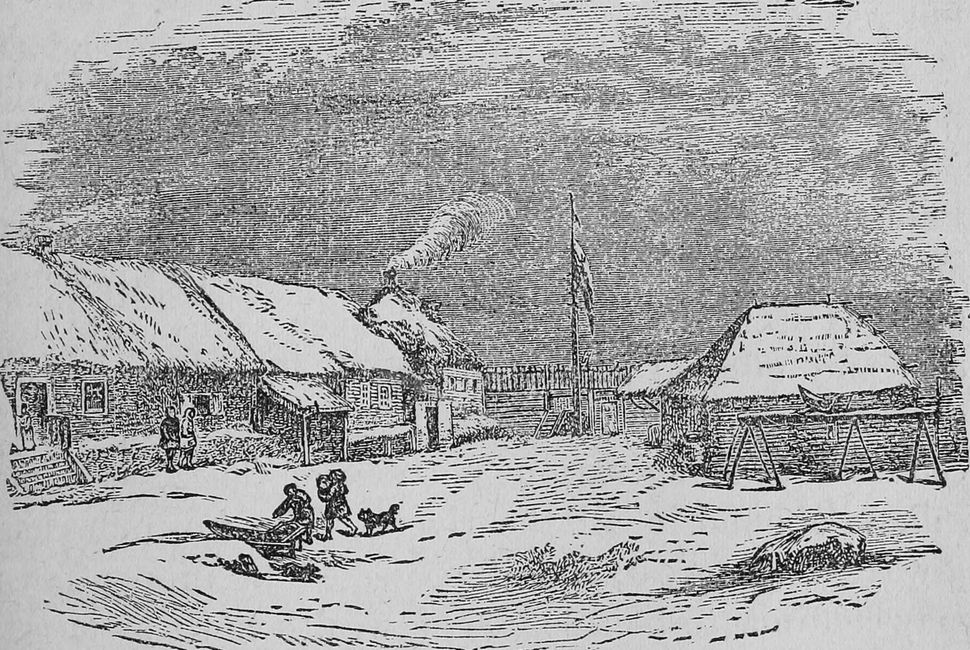 A settlement in Siberia Image by Getty Images

Read this story in Yiddish

It was the only time in my life when everyone at the Passover table was thinking only about the Haggadah, not the matzo balls — perhaps because there wasn’t a whiff of a matzo ball to be found.

That year in Siberia, spring arrived a few weeks earlier than expected. Here and there, the Ob began to thaw. We had to stop crossing the river by sled, and even walking on the ice became risky, so we stayed home and waited to be able to make it over by boat. This waiting was no small problem. Of course we were accustomed to waiting, but it’s one thing to wait when you’re getting your daily bread ration or have a few potatoes, beets, or turnips on hand — and quite another when your cupboard is completely bare, and the few “prosperous” Siberians in the area, the old-time settlers, can’t be persuaded to part with the smallest crumb, no matter what you offer. Everyone’s reserves were running low. People wouldn’t risk taking food out of their own mouths for all the money in the world.

As if that weren’t enough, God sent us yet another affliction — not one from the Haggadah but a Siberian one. The heavy layers of snow that had built up during the long winter caused the chimney of the bakery in Krasnoye to collapse. This, alas, was the only large-scale bakery in the area. It provided bread to villages and settlements for miles around. What were we to do? Three times a day, we gobbled down whatever meager nourishment we could put our hands on. We gathered mushrooms in the forest and ate them with the wild garlic the Siberians called kolba, and before we’d swallowed the last spoonful we were hungry again.

Two weeks passed like this, and then came word from Krasnoye, where the village council and our commandant were located, saying that if we sent them two strong young men with sleds, they would give us the sacks of flour we were owed for the two weeks. After that … God willing, the bakery would soon be back in operation.

The entire district turned out to send off the expedition. Everyone had a suggestion, a word of advice, a blessing. The journey would be difficult, as the road was not smooth but full of puddles, so that even empty sleds were hard to move. A week passed before we saw them come crawling back, inching along with the help of those who’d been sent to meet them.

In this way the Lord provided us with matzo for Passover. The non-Jews made potato dumplings they called kletski, as well as zateriukhes, which they devoured with a thin potato soup, and since it was the day before Passover, the Jewish women used our portion to bake matzo.

Baking matzo — how impressive that sounds. It wasn’t egg matzo, and it certainly wasn’t made according to the traditional rules. The dough kept falling apart under the rolling pin, and the matzos came out tiny, each no bigger than a yawn, but they were matzos all the same. Also, they were the color of clay. Nonetheless, they were very tasty. Where is it written that matzos must be crisp and pale? Our matzos certainly filled the bill for a Siberian “bread of affliction.”

All the Jewish families from our section and the one next to ours came to the seder, and there was matzo for everyone. My mother led the ceremony. Since we had no Haggadahs, she proposed that we celebrate the seder in a new way. Year after year, she said, we’d conducted the seder according to the rules laid down by the scholars of old, but this year, by necessity, we’d add our own twist. We would not ask the Four Questions, first of all because there was no one to ask them of, and second because once we began asking we wouldn’t be done till morning. Our questions weren’t actually questions anyway — they were complaints, directed at God.

For example, why on this day do we not eat leavened bread? Very simple. Because the bakery in Krasnoye isn’t operating. And maror? We have more bitter herbs than we need; we’ve all eaten kolba till we’re green in the face. As for dipping, we’re drowning in a sea of tears, and when it comes to reclining, we’re up to our necks in the middle of nowhere.

We were slaves in Egypt, my mother said, and today we’re slaves of Stalin, exiled to hard labor in the Siberian taiga, without rights and without the slightest hope of rescue.

Why, my mother continued, should we listen to what Eliezer said thousands of years ago about the exodus from Egypt, or quote from the words of Reb Berl or Reb Shmerl, when right here at the table, Aunt Gitl and Madam Glazer, Madam Gurevitz and Sonya Shmukler, Sheyndl Gelman and Madam Schwartsman can tell us about how their homes were destroyed in the dark of night and their families torn asunder without a why or wherefore? Let each of us tell how we used to live in our little towns, upholding our Jewish traditions and our humanity, caring for the poor, distributing challah for Shabbat and matzos for Passover, providing dowries to needy brides and help to the destitute. Yet even so, the Lord sent his messenger to condemn us to wander and suffer in the Siberian taiga.

If we had been exiled and not separated from the men — dayeynu! That would have been misery enough! But no, the cup of suffering had to be drained to the very dregs. The men were separated from us and sent to the slave labor camps in the Urals while the women and children were condemned to die in the taiga.

Our sins, my mother said, must have been great indeed to cause the Lord to pour out his wrath upon us. Great indeed to cause him to send down the plagues upon us rather than upon our oppressors. And speaking of wrath, why, Lord, are You always full of wrath, and why must You always be visiting Your wrath on someone? After all, it was You who created the world that turned out the way it did. You have only Yourself to blame.

Everyone agreed. We all contributed our share to the unwritten Siberian Haggadah until the hour grew late and we noticed the seder plate that had been sitting on the table like a poor bride dressed in borrowed finery. A boiled potato scrounged up from somewhere, a bone from God knows what animal, a pine cone in place of an egg, berries instead of haroseth, and a big heap of maror — kolba, of course. Everyone at the table shared in the bounty, we said a blessing, and the meal was served. We finished up with strong tea brewed from dried lingonberry leaves, and then we sang. We put our own special stamp on the songs. We ended the “Who knows one?” song partway through, right after the Four Matriarchs, so as to give pride of place to the “Khad-gadye,” in which the cat devours the goat, the dog bites the cat, the stick beats the dog, and so on and so on — one big outpouring of pain and suffering without any attempt to make peace, just killing and burning and devouring on all sides, until finally the Angel of Death kills the slaughterer, at which point God finally realizes that things have gone too far and steps in to end the massacre.

Isn’t it remarkable, my mother said, what people can take pleasure in, what they can believe in, in times of need? We tell ourselves a terrible story, we slap on a happy ending — and praised be the Lord, leoylem-voed, forever. We repeat the story generation after generation and cling like drowning people to the hope that the same God who led our forefathers out of Egypt will also rescue us from here, bimheyre-beyemeynu, speedily in our days, amen!

None of us wanted to think that this seder might be our last. But by the next year, my mother was no longer alive, and other women from our town of Zguritse had also died before their time. They lie buried in the Siberian earth for eternity. We never had any more matzos, not even miraculous ones, and never again did we feel a desire to celebrate another seder in Siberia.

“A Seder in the Taiga” appears in “On the Landing: Stories by Yenta Mash,” translated by Ellen Cassedy (Northern Illinois University Press, 2018). The story appeared originally as “A seyder in der tayge” in Mash’s collection “Mit der letster hakofe” (“The Last Time Around”), Tel Aviv: H. Leivick Farlag, 2007.

Yenta Mash was born in 1922 and grew up in Zguritse, a small town in the region once known as Bessarabia (now in Moldova). In 1941, she and her parents were exiled to Siberia. Her parents died in the labor camps; she remained there until 1948. She lived in Kishinev for several decades and worked as a bookkeeper. In 1977, she immigrated to Israel and settled in Haifa, where she began writing and publishing her work. Her last book was published in 2007; she died in 2013.

A seder in Siberia