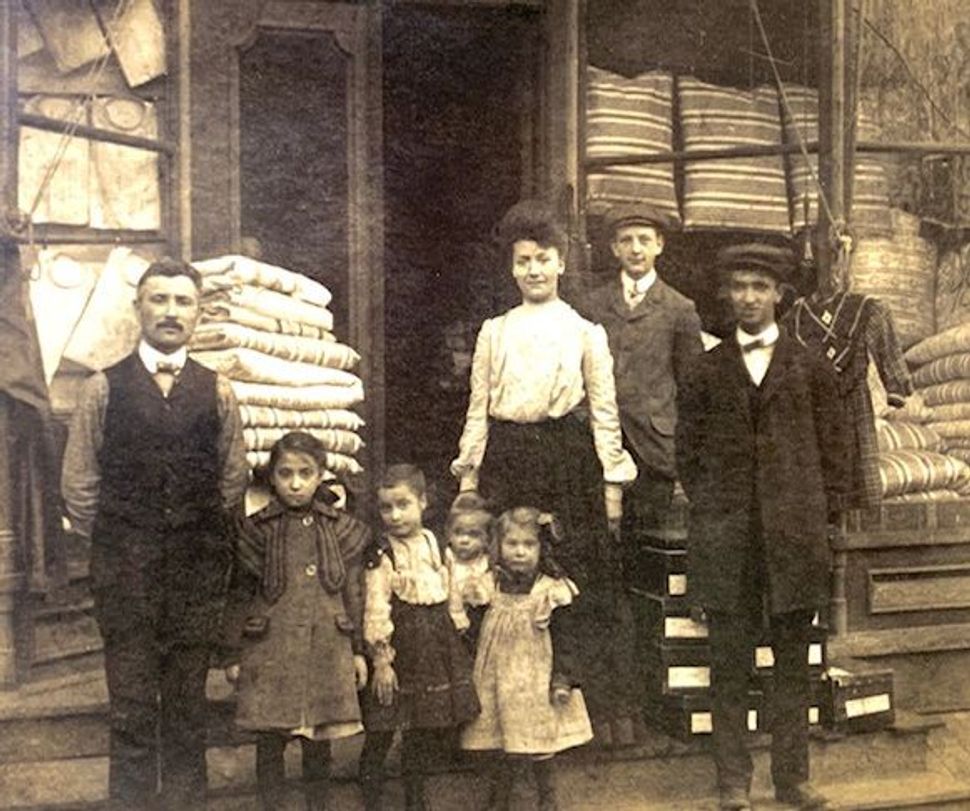 Alice Wolowitz, second from left, with her father Hershel in front of his store in Girardville, Phil., about 1905. Image by Courtesy of Harry Wall

For millions of Americans, the history of the 1918 Spanish Flu pandemic has become, unfortunately, newly relevant.

But for my family, the 1918 pandemic entered our lives in a very personal way less than a decade ago, in the spring of 2011, when my father, a retired physician, read John Barry’s book “The Great Influenza.”

When he reached chapter 19, it was like hearing a voice from the grave.

“Alice Wolowitz, a student nurse, began her shift at a hospital one morning in Philadelphia,” Barry wrote. “She fell sick during the shift, rapidly declined and was dead that night.” 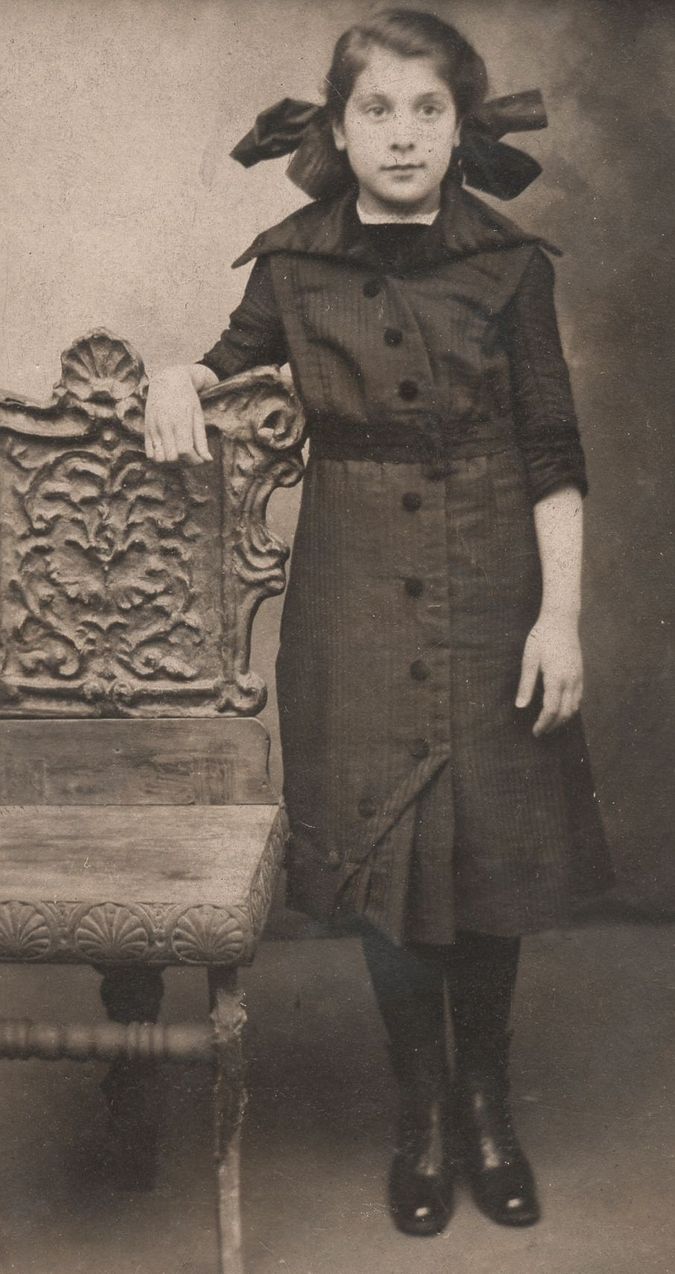 Until he read those words, my father had never known what happened to his sister. When he suddenly found out, it was not only a jolt, but a call to action.

Alice was a 16-year-old girl who grew up in the small Pennsylvania coal-mining town of Girardville. Her parents, Jewish immigrants from the Russian Pale of Settlement, owned a small dry goods store. Alice, a vivacious and adventurous young girl, was the oldest of nine children. With two brothers serving in World War I in Europe, she heard her own patriotic drummer and dropped out of high school in 1918 to nurse sick soldiers in a Philadelphia hospital far from her hometown.

That decision, probably as impetuous as it was courageous, proved costly.

Philadelphia was an epicenter of the 1918 pandemic. The virus was thought to have been brought to America by sailors returning from Europe during World War I, and in Philadelphia, its spread was exacerbated by an ill-conceived parade for the war effort that packed over 200,000 people into the downtown streets on September 28. Within days, the virus spread furiously. The numbers of dead spiked, eventually reaching over 10,000 victims, with those between ages 20 and 40 particularly vulnerable. Bodies were piled up on the streets. Hospitals were overwhelmed and understaffed.

It was into this toxic environment that young Alice found herself volunteering in a Philadelphia hospital. Without training, there is probably not much she could have done for the patients, other than offer comfort and compassion. Like other health care workers, she was unprotected. But, like the healthcare providers of today, Alice put her life on the line to help others in a time of crisis. As Barry wrote, on October 18 she showed up for work, became terribly sick and died that same day. She was buried quietly, and probably quickly, in the chaos of the pandemic. There was probably no memorial service, and possibly no one to say kaddish at her graveside.

For my grandparents, it must have been a terrible trauma, the death of their beloved first child in the remote, frightening big city. About 100 miles away, Philadelphia may as well have been the moon for them. And there she remained, her grave unknown and unvisited for almost a century.

My father, Norman, was only four years old when Alice died, so he never even knew his sister. The youngest of the Wolowitz children — he later changed his surname to Wall — he was the only one of his siblings to get a graduate education, eventually becoming a doctor, serving his country in World War II and building a successful and fulfilling career in medicine. He also became the anchor of his large extended family, helping relatives in need and bringing the clan together for holidays. Only missing were Alice and Lilian, another sister who served in World War II and was killed in a jeep accident — two sisters who died in the service of their country.

It’s unclear why my father never knew what happened to his eldest sister. Or why he waited so long to find out. Maybe because his parents didn’t want to discuss her passing. Maybe because he thought she was a casualty of the war, buried like an unknown soldier, even though she wasn’t in the army. But when he finally did learn the details of her passing, he knew he had to do something: to give a young girl, who died alone and anonymously in humanitarian service, her long-delayed commemoration.

At 96, an age when most of his contemporaries were either dead or incapacitated, he began to search for Alice’s remains. With the help of my brother, a professional researcher, they located her grave in a crowded cemetery in Philadelphia. Another search found her obituary in the weekly Jewish Exponent, dated October 28,1918. It was short, noting only her name, age, service at the hospital and that “she died a martyr to duty.”

My father began planning how to remember Alice, nine decades after her passing. He wanted to give recognition to his sister’s service and reunite her with his family. He wanted to bring Alice home.

Norman Wall, left, and his nephew Melvin Wall at the memorial ceremony for Alice Wolowitz. Image by Courtesy of Harry Wall

Home is Schuylkill County, Penn. and, in this case, a scenic mountaintop cemetery in Shenandoah, where my father’s parents, siblings and other family members were already all at rest. Kehilat Israel is a small Jewish graveyard; almost everyone buried there — immigrants and merchants and their parents and offspring — knew each other well. It’s all that remains of a once-vibrant community.

My father’s intention was to re-inter Alice’s remains to lie alongside those her family. But that proved problematic, at least partially because Jewish halachic law prohibits disinternment. So instead he opted to have a memorial made, a grey granite bench that bears a plaque inscribed with Alice’s name in honor of her memory and her sacrifice. It was installed facing the graves of her parents and other family members.

On a stormy July afternoon in 2011, only a few months after my father first learned of Alice’s fate, the family came from all across the Eastern seaboard to gather at the cemetery in Shenandoah and dedicate the memorial. It was a service conceived of and choreographed by my father, the patriarch of a dispersed clan who seldom saw each other. We huddled under a canopy during a hard rainfall. When it was my father’s turn to speak, the rain conveniently stopped.

He stood before the small gathering, his carefully combed white hair tousled by the wind, and addressed his family and friends, explaining why we were here. He had made speeches before audiences throughout his life. None, he said, was as important as this event, where he was speaking to only about 30 people.

At the ceremony, he spoke about a beautiful young girl, a compassionate caregiver, struck down by devastating disease, buried alone and left forgotten. He spoke about the importance of family. About values. About tradition. And memory. We recited the mourner’s kaddish. As we left the cemetery, I watched my father as he looked at the headstones of his other family members. He seemed at ease; he had completed his task. After 92 years, he had brought Alice home. 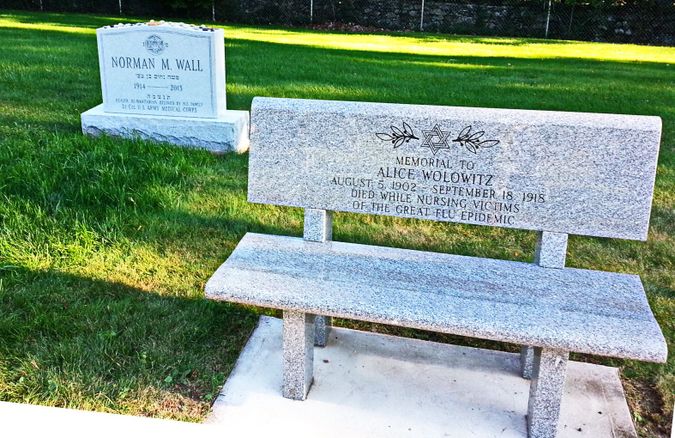 Alice Wolowitz’s memorial bench, with the grave of Normal Wall, father of the author, in the background. Image by Courtesy of Harry Wall

My father passed away a few years later. His own grave is now a few feet from the bench we dedicated to Alice.

I think often about that memorial service these days. About a dedicated young nurse who lost her life in caring for others. About my father’s determination to recognize her. And of the countless health care providers today whose courage and service are heroic in the battle against another pandemic.