OY! OOF! BLAH! An artist’s guide to the three stages of grief 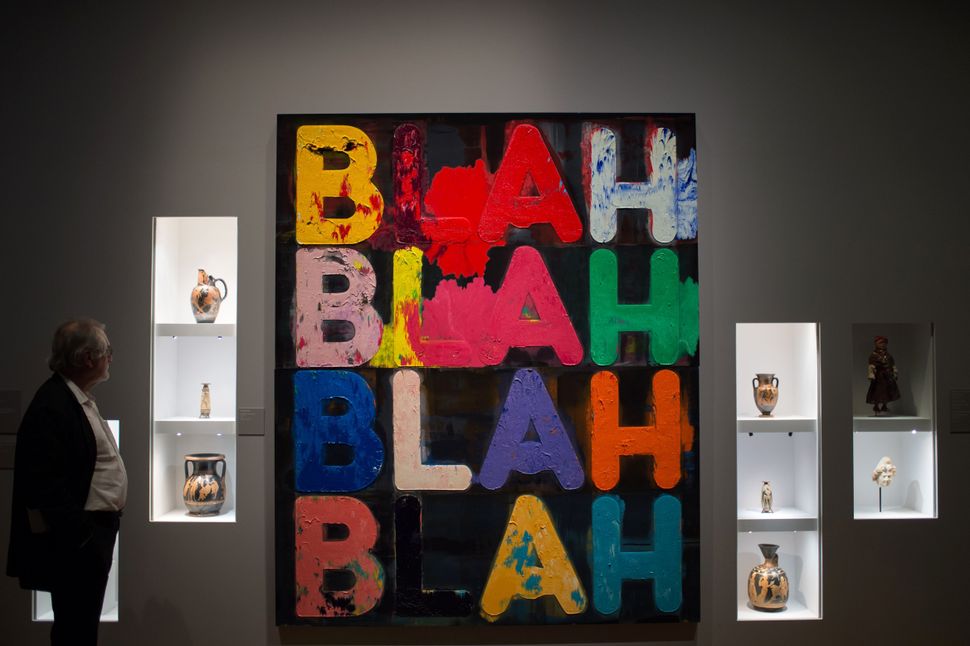 While I was working as an architect in Holborn, London, one of my guilty pleasures was popping into the nearby British Museum during my lunch hour. Little did I appreciate the positive effects that this was having on my well-being.

According to a 2006 study on London City workers by Angela Chow of University of Westminster, a half hour visit to an art gallery can significantly reduce high stress, often encountered by urban professionals, to more acceptable, healthier levels. During these difficult times of pandemic-induced social-distancing, the luxury of pushing past visitors through MOMA’s expanded galleries, up the Guggenheim’s spiral ramps or onto the Met’s iconic steps, armed only with elbows, is no longer available. Kudos to the many galleries and artists who are posting virtual tours and initiatives, yet it is hard to rid oneself of this longing. A deep sense of nostalgia is already forming.

Michael J. Formica of Psychology Today says that what we are experiencing through social distancing is grief. We have all lost something; with loss comes grief, and each person’s grief will be personal, as is their specific loss. Rather than focusing on the Kübler-Ross five stages of grief, I would like to refer to the three stages of denial, anger and acceptance. To address the loss of my favorite pastime and to assist with the grieving, I am drawing from my own, personal, back-catalogue of art experiences.

For me, no artists say it better, or with more attitude, than these: 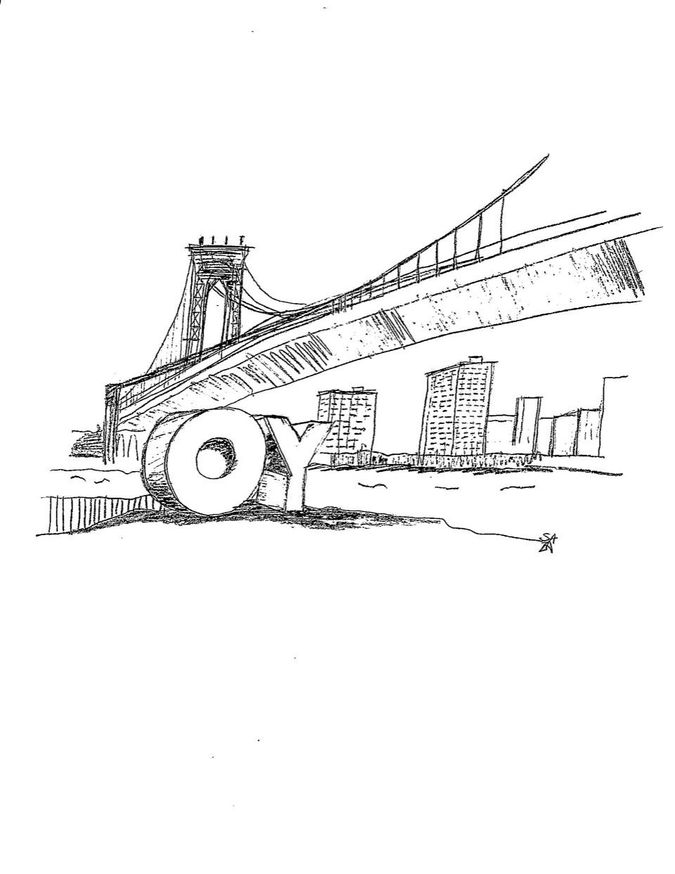 OY/YO: Debra Kass’s work says something different depending on which side you’re looking at. Image by Sarah Balcombe

Debra Kass’s timeless “OY/YO” evokes Tevye the milkman, from “Fiddler on the Roof,” shaking his fists at the heavens and bargaining with God. It seems especially relevant at this time of the year, as we have celebrated Passover Seders and Easter, in their least communal state ever i.e. alone. Having “OY” articulated by Debra Kass, whose bold yellow sculpture was recently acquired by the Jewish Museum, New York, says it all. Its original form, beautifully sited on the water’s edge in Brooklyn Bridge Park, with all its connotations of immigration, hopes and dreams, reads as OY looking from Brooklyn across to New York and YO as a welcome to Brooklyn. And for this time in our lives OY VEY indeed.

How appropriate that it doesn’t merely communicate a Yiddish expression of denial, fatigue, resignation and despair, it also speaks of “I” in Spanish and is used as a form of emphasis in Japanese, as Beth Giudicessi noted last year in Stanford News. Kass delights in the communal spirit of the sculpture, which has resonance in multiple languages. Today it speaks of the fact that we are all in this together. Examples of this “togetherness” can be seen in free, live-streaming initiatives with artists creating and sharing in multiple ways, from their homes, utilizing new media to extend their accessibility and their reach. Creativity triumphs and with it, reinvention.

In the case of OY/YO, Kass claims that she drew inspiration from Ed Ruscha’s 1962 painting, which leads to: 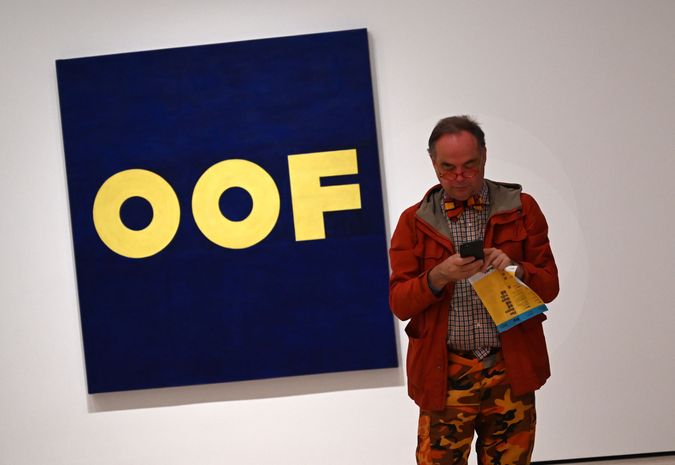 Ed Ruscha’s love of typography led to 1962’s groundbreaking “New Painting of Common Objects” in Pasadena, in which Ruscha’s work was exhibited with work by Andy Warhol and Roy Lichtenstein. Raised in a devout Catholic family in Oklahoma, Ruscha had headed west at the age of 18, meeting artist friends such as Larry Bell, Edward Kienholz, Wallace Berman and his teacher Robert Irwin. With the help of the Ferus Gallery they collectively launched the notably cool, Pop Art movement in LA.

Though he experimented in other media, once Ruscha has established his typographic style, he committed to its simplicity. Selecting words with an almost primordial impact, his art has a delectable super-hero, comic-book toughness, hinting at timeless resilience and entertainment. I would like to think that his “OOF,” created in 1962, directly influenced ABC’s “Batman,” which first aired in 1966. Visually articulating its onomatopoeia with flair, this show produced a longer OOOFF! and an even longer OOOOFF! appearing alongside such gems as KAPOW!, KER-PLOP! and KER-SPLOOSH!

More relevant now than ever “OOF,” with its Yves Klein blue background and bold yellow lettering, punches big, measuring almost 6ft by 5ft at MoMA. Find comfort in saying “OOF” (while gesturing) to all those artists whose exhibitions have been cancelled, “OOF” to accumulating debt and worse, “OOF” to those plans that we shouldn’t have made and “OOF” to life on hold, life lost and to the life that was happening while we were busy making plans (well said, John Lennon). Coincidentally “OOF” in Hebrew means to fly. Escape, from one place to another. Ironic. 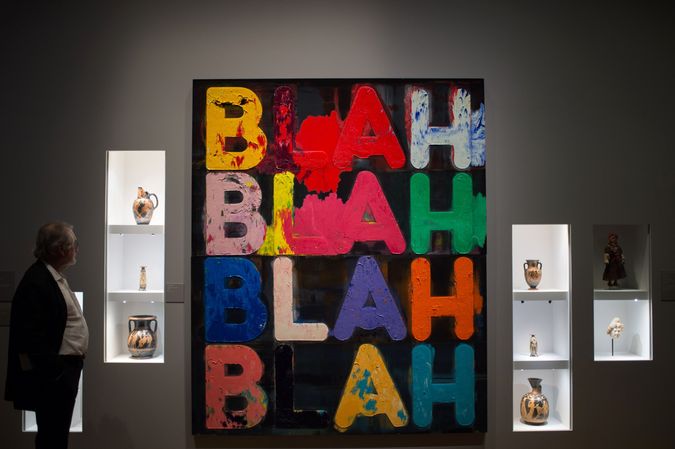 Another word that seems to pop up often in the art community is how “BLAH” we are all feeling. So emoji palms together for a big thanks to Mel Bochner, who in 2008, facilitated this stage for all of us with his “BLAH BLAH BLAH” series (2008-12). Born in Pittsburgh twelve years after Andy Warhol, the two artists shared the same teacher, Joseph Fitzpatrick, and both exhibited a bold approach to color and layering.

Evolving just after the Abstract Expressionism movement, Bochner claims that his drippy style of painting was influenced by artists such as Robert Rauschenberg and Jasper Johns. Where Rauschenberg used found objects to construct his mid-1950s “Combines,” Bochner uses words as a construct. “The words themselves became my found objects,” he told ARTnews from his Tribeca studio in 2014. Of one thing we can be certain: his 2003 “Pay Nothing Until April” is a distressingly accurate portrait of these uncertain times. Blah acceptance? Perhaps. For those of us who can reach this stage. Blah ambivalence? Absolutely not. Not yet. Not ever.

During days like these, we can be indebted to whatever gets us through. For me, it’s these artists, for helping us to traverse this period with just a smidgen of Yiddishkeit, whether they were aware of it or not. Let us try to be uplifted by the thoughts that this too shall pass(over), that art remains a valid and proven stress reliever, and that the time will come when we get the chance to once again elbow our way through New York’s bastions of modern art, relishing every encounter.

Sarah Balcombe is an architect, artist and founding editor of the arts blog www.manhattanmodernist.com Her artwork can be seen at www.sarahbalcombe.com

OY! OOF! BLAH! An artist’s guide to the three stages of grief