The preliminary burdens of freedom 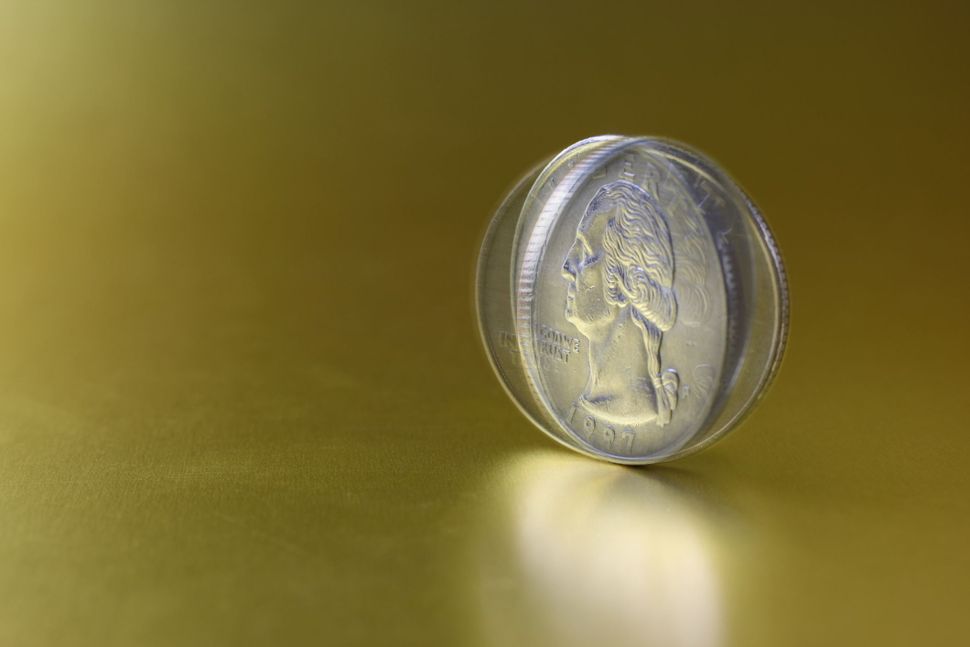 A quarter Image by iStock

Editor’s Note: The Forward’s Youth Writing Contest is asking middle and high school students to submit essays, short stories and poems on the topic “What It Means To Be Free.” We’re still accepting entries at essays@forward.com — you can find the entry guidelines here.The deadline is Friday, May 1. Today, we’re proud to publish this poem by Aaliyah Magana, a 16-year-old student from Fullerton, California. We’ll be publishing more exciting new voices soon. You can find some of them here.

It’s the little things that I remember from my childhood that signified freedom in America. From the “free” house where I lived and all my “free” toys that were given to me to even my “free” siblings who popped up when I needed someone to play with. Nothing is truly free anywhere without some form of payment even if it’s just your attention.

I didn’t realize the value of money until I saw that that luscious silver quarter spin on its edge, picking it up and then noticing the flashy “Only 25 cents” signs around me that thirsted for my precious finding. Although what it means to be free in 2020 doesn’t only refer to money or the American dream and I can’t give a brief explanation or cram all my evidence into five mediocre paragraphs; I can just tell some stories of how I defined “freedom.”

I’ll be 17 years old this year and so will my twin sister, Alyissa. She speaks with an aggressive and sassy tone even when she is asking for the salt at dinner but there is some logic to her crazy. We weren’t raised to be street-smart but raised to be book-smart by our mom. This meant we were bullied up until eighth grade for not wanting a bloody nose over staring a little too long in the hallways.

I’ve never spoken out about the days when Alyissa and I would be followed on our way home by a group of girls who would take pleasure in seeing our moist cheeks.

There were other times when I would get told slanders from across the room in my science class but would still not say anything to defend myself. If Alyissa was there she would have started a riot in my honor; I promised myself I would not cry in the bathroom stall any longer and that I would stand up for myself. Of course not by getting expelled from my middle school for starting a fight but by protecting my siblings from being misinformed about the world around them as I am a first-amendment-abiding journalist.

I’m not the perfect older sister, the ideal high school student or the bubbly daughter my biological father wanted. No one has the freedom to choose their father. It’s not a matter of chance or luck but of collision. My mom and dad met at the wrong place at the wrong time but created just the right amount of children to rack up enough child support debt to have a warrant for his arrest.

You can see this through two perspectives: I’m a hormonal teenager with a grudge against her father or I’m a writer who chose to exercise her freedom of speech as an American and also accepts the unshaken emotions of abandonment. Moreover, my stepfather is free to walk out with his bags packed and wedding ring on the table but he wouldn’t do that to himself or us. It would greatly impact our family not only financially but mentally. The man who raised me for 12 years wouldn’t walk out like the father who did after several premature tantrums.

I’m not scornful towards the heart-wrenching past but grateful for my promising future because I’m a free (and underage) teenager who lives in a society where self-acceptance is key. I know what I’ve been writing so far seems a little off-topic to the prompt but trust me there is a theme.

To be a teenager in 2020 America, there are a lot of expectations I haven’t met. I haven’t gotten a car because I don’t have my permit (I’m still studying for the permit test). I don’t have my whole life planned out because I have decided that I plan to be a well-known journalist by the time I am 30 years old with my daughter starting kindergarten. I have made mistakes that do logically define me. Whether it was not studying long enough for a test or studying the wrong material for too long. I often find myself lost in my train of thought and eventually digress into a less miraculous world in the back of my head. See, these thoughts are not about modern feminism or how to perfect my calligraphy but moreover about how I’m making less of an impact on the world around me. There are such things as a carbon footprint, a digital footprint and a soft dirt footprint but how can there be a footprint that lingers on someone’s life after I’ve left to do “bigger and better things”?

The preliminary burdens of freedom