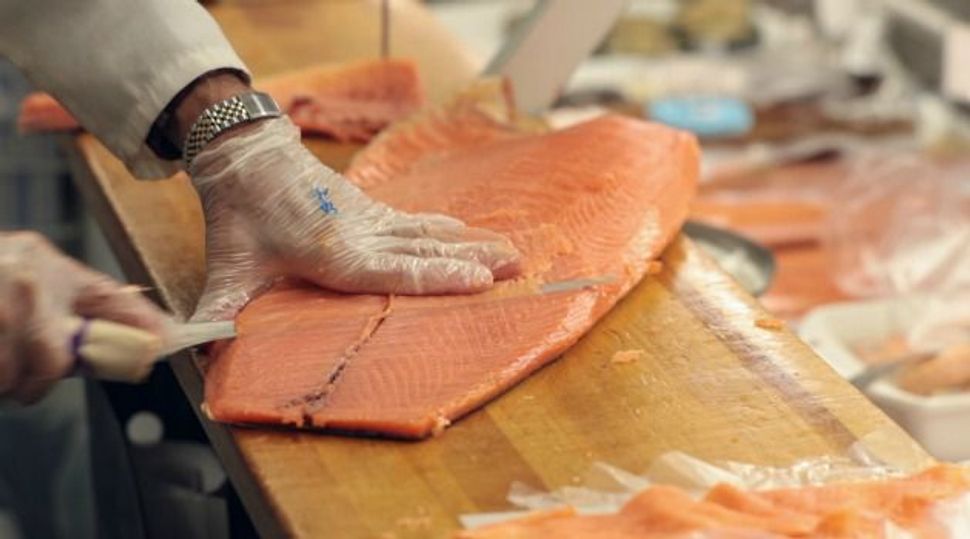 Handle With Care: Len Berk slices through a side of Nova at Zabar’s delicatessan in Manhattan. Image by martyna starosta

Her left arm was securely held by the health care worker who accompanied her.

They approached the fish counter very slowly and carefully. With total disregard for who was next in line, she looked me in the eye and spoke.

“I don’t want salty” she said in a belligerent tone.

“I don’t want salty,” she repeated.

She seemed to be at least ninety years old. I asked her if she wanted Zabar’s Nova and she replied, “yes, but I don’t want salty.”

I cut a small taste size from my salmon and handed it to her over the counter. “Taste this, you’ll love it. If you want salty you’ll have to go to another store,” I said.

“It’s good. Two half-pounds,” she replied with a pained expression.

They came weekly thereafter for repeat performances of the “I don’t want salty” routine.

Then, one day I cut her off at the pass. “NO SALTY FOR YOU TODAY,” I said.

That was the breakthrough and the last time “salty” was ever mentioned as a possible problem.

As the months passed, I managed to earn her trust and a fishy relationship evolved. We had repeated conversations about how “not salty the salmon was, this time.” On one occasion her health care worker — I don’t know her name so let’s just call her Olga — felt that her charge was, perhaps, asking too many questions and taking up too much of my time. Olga reprimanded her and it bothered me. The woman was obviously going through that stage of life when she could recognize the loss of her powers on a daily basis.

I told Olga that there was no problem with the questions and suggested that the woman was old and fading and that, although I knew how difficult her job could be at times, she could try to be kinder. On past occasions, Olga and I had discussed the difficulties of aging and she seemed to both understand and appreciate my advice.

My relationship with the old lady matured, and it wasn’t long before we were discussing other types of smoked fish.

A year passed and, on her weekly visits to the store, she started appearing in a wheelchair.

“She’s outside in the wheelchair.”

“She has Alzheimer’s and it wouldn’t be good if I brought her in.”

I felt terrible. “I’m so sorry to hear such news.” I tried looking for an upside. “But apparently her tastebuds are still working since you’re buying smoked salmon for her,” I said.

That was the best I could do.

“Oh, it’s the son; he pays for everything,” Olga said.

I was flabbergasted. “You mean all these years I’ve been having lox talk with Woody Allen’s mother and I didn’t know who she was?”

It took some time for me to recover and then I felt so good because I knew that I couldn’t have taken better care of her even if I had known who she was.

Len Berk worked for 26 years behind the lox counter at Zabar’s.